As of June 30, survey respondents reported proprietary mutual fund assets in U.S. defined contribution plans totaling $3.19 trillion, up 5.4% from $3.02 trillion a year ago. Of that, more than a quarter — $877.2 billion — was for target-date mutual funds. Target-date mutual fund assets grew 13.9% over the year and were up 101% from five years ago. In contrast, total assets in all other mutual fund categories grew just 2.6% to $2.31 trillion from a year earlier and 16.4% from $1.98 trillion five years ago.

Total assets managed in proprietary target-date strategies for U.S. DC plans in all investment vehicles, including commingled trusts and separate accounts in addition to mutual funds, climbed 10.9% to $1.7 trillion over the year and also more than doubled from five years ago.

"TDFs are getting the lion's share of new money, especially inside DC plans," said David Blanchett, head of retirement research at Morningstar Inc. in Chicago.

"You're seeing money flow into default solutions in general more regularly, more stably and in higher numbers," he said, adding that target-date funds are the most popular default investment option. "When new people come into a plan, they're more apt to be put in by auto features these days because plan sponsors are being more proactive in that regard."

Of the top target-date providers, Vanguard Group Inc. is in a league of its own. The Malvern, Pa.-based firm commands by far the largest slice of target-date business in defined contribution plans with $592.4 billion in assets, or 34.9% of the total, according to the data. T. Rowe Price Group Inc. jumped to second with $231.6 billion, followed closely by Fidelity Investments with $229.7 billion and BlackRock Inc. with $227.1 billion. J.P. Morgan Asset Management ranks fifth with $120.1 billion.

Vanguard, however, was not able to beat the growth rate of sixth-ranked Capital Group Cos., which posted a 31.7% increase in assets, the biggest gainer of target-date fund assets for two years in a row. As of June 30, Capital Group's assets had swelled to $114.2 billion, more than double the $58 billion it had in 2017. 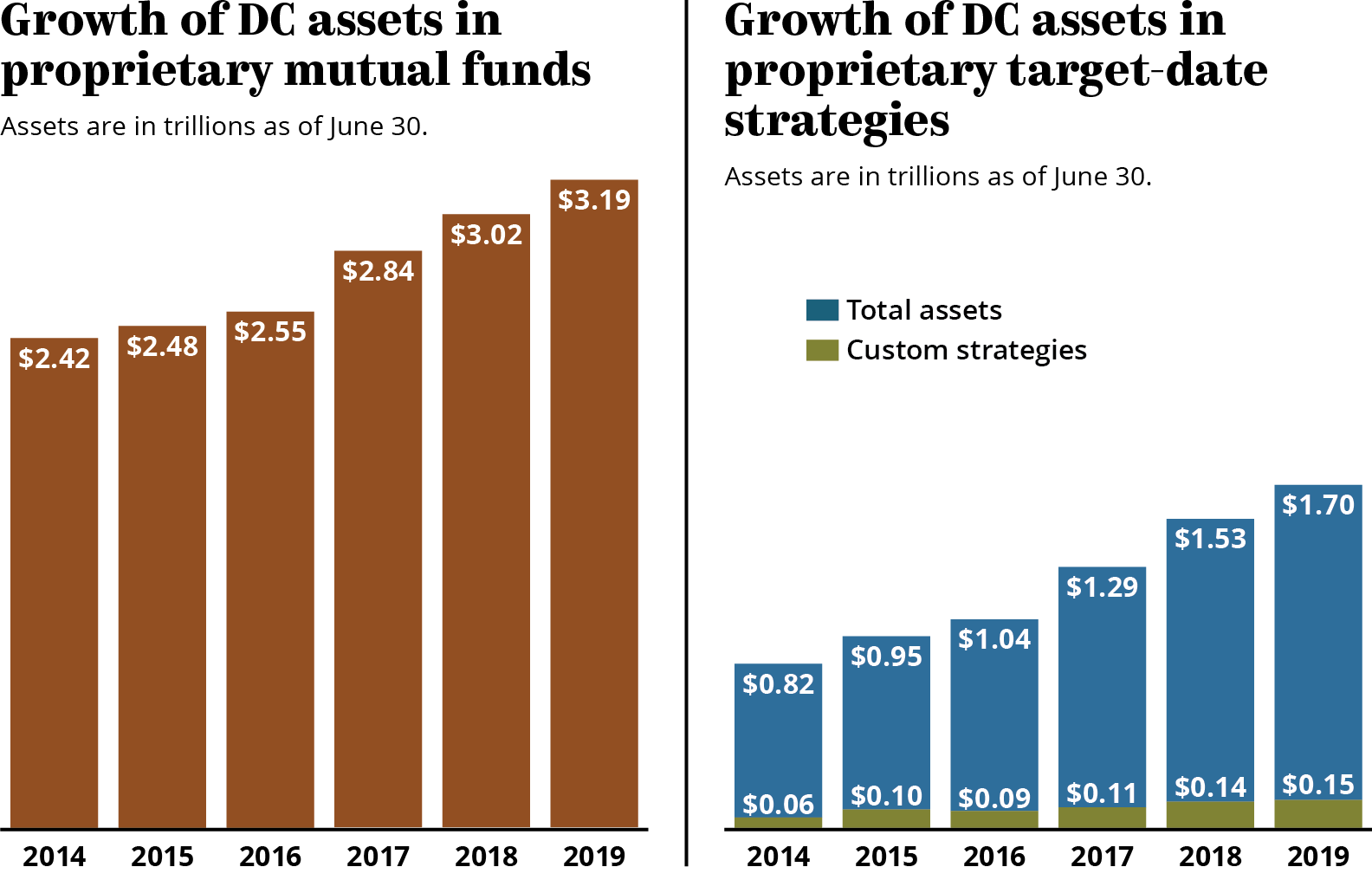 Ralph Haberli, senior vice president and director of institutional retirement at Capital Group in Los Angeles, attributed the success of its target-date series to its focus on the level and characteristics of equity held along the glidepath.

"As plan participants near retirement, they increasingly hold conservative, dividend-paying equities. Over time, this has contributed to strong results and a smoother ride for the participants in our target date series," he said.

Of the top five target-date managers, T. Rowe Price moved up one spot to second place, bumping Fidelity down to third. While Fidelity's and T. Rowe's funds received a silver analyst rating from Morningstar, the historical performance of the T. Rowe Price series has been better, a possible explanation for Fidelity's falling to third place, Mr. Blanchett said. Mr. Blanchett said he expects Vanguard to maintain its dominance in target-date funds for the foreseeable future.

"Vanguard is widely perceived as the low-cost leader in the TDF space and they are likely to continue to benefit from the increased focus on low-cost, passive strategies," he said.

Mr. Blanchett even expects Vanguard's relative share of target-date assets to grow given its positioning as "the low-cost leader of passive in the TDF space," he said.

Vanguard, too, sees opportunities for more growth, particularly among small business 401(k) plan sponsors. In 2018, 61% of participants in the retirement plans it serves with up to $20 million in assets invested in a single target-date fund. The firm expects that to grow to 80% by 2023, a spokeswoman for Vanguard said.

In general, the robust growth of target-date funds in defined contribution plans is not likely to abate anytime soon given their use as the qualified default investment option, according to industry observers. Mr. Blanchett, for example, sees strong growth potential for target-date funds because many plans still don't have auto enrollment, a situation that he believes will change over time.

"Because TDFs still aren't utilized as heavily as they could be if everyone was defaulted in using them, we'll see assets in TDFs continue to grow for it could be a decade or more in the future," Mr. Blanchett said.

Mr. Shapiro of Willis Towers Watson was more measured in his outlook. In the short term, target-date funds will grow given their low fees and the "reasonable asset allocation" they provide, he said. However, longer term he sees plan sponsors questioning whether target-date funds will do the trick in terms of securing the retirement readiness of their participants.

"While target-date funds do a lot of things really well, they still do expose participants to a quite a lot of market risk not only early in their career but even at and through retirement," he said.

In an effort to resolve these issues, plan sponsors are asking questions about marrying the best features and characteristics of target-date funds with other strategies such as managed accounts, according to Mr. Shapiro.

"We do think that over the intermediate term we'll see shifts away from the types of structures that we're seeing most prevalent today, which is very low-cost, very basic building blocks in TDFs to more robust portfolios, more thoughtful structures and effectively more evolved QDIAs," he said.

"As more plans use them (target-date funds) and get more assets, the mutual fund dollars will get moved to custom or CIT solutions because they tend to be lower cost," said Mr. Blanchett.

Meanwhile, assets in separate account target-date funds fell 12.1% to $135.7 billion from $154.4 billion last year. Mr. Shapiro posited that the year-over-year decrease may be due to potentially increased availability of pooled fund options in the target-date space.

Target-date assets in separate accounts were up, however, from $62.1 billion five years ago, an increase that may be somewhat correlated to the long-term growth in custom target-date funds, according to Mr. Shapiro.

"As custom implementations increase, sponsors are creating accounts that are specifically built for their populations. While some have actually structured funds such as CITs to implement a custom strategy, many create separate accounts to hold the underlying funds and/or securities for the target-date offering."

Roughly the same players that dominate target-date funds also command a hefty share of the assets in mutual funds overall. Vanguard led the pack with $904.8 billion in mutual fund assets, up 17.5% from last year. Fidelity ranked second with $603.4 billion, followed by Capital Group with $412.9 billion, T. Rowe Price with $258.5 billion and J.P. Morgan with $104.7 billion. BlackRock trailed the top five with $76.7 billion.

BlackRock's growth catapulted the firm to sixth place from tenth last year. Other top mutual fund asset gainers — Invesco Ltd. and MFS Investment Management — also moved up the leaderboard. Invesco grew its mutual fund assets 77% year-over-year to $69 billion primarily due to its acquisition of OppenheimerFunds Inc. earlier this year, swinging up five spots to tenth place. And MFS Investment, which grew assets 30.2% to $70.5 billion, moved up to eighth place from 12th.

The top five managers of proprietary mutual funds, however, held the same ranking as last year.

ESG rules for private markets begin to sprout up