The passive train hit the brakes in 2018, as assets under management fell more than 3% against a backdrop of battered equity markets.

"That, clearly, bucks the longer-term trend," said Bob Collie, head of research at the Thinking Ahead Institute in London. "The most likely explanation will be to do with asset allocation," because passively managed assets are relatively concentrated in asset classes that performed the weakest in 2018. "But the decrease is notable since it is unexpected," Mr. Collie added.

Mr. Collie also noted that hits to equity markets filtered through to the assets of the 20 largest money management firms in the ranking, whose assets fell 4.8% to $38.7 trillion as of Dec. 31. For the 500 largest managers, aggregate assets under management fell 3% in 2018 to $91.5 trillion.

"The single biggest factor would be market performance," Mr. Collie said. "When the index goes down, that causes assets to go down."

Mr. Collie said the finding that assets managed by the top 20 fell is "interesting in the sense that it's not what we would have expected — the general trend has been an increase in concentration and the expectation is that this industry is going to consolidate. There are hundreds of asset managers, and it seems like it's an industry where the middle is going to get squeezed."

But the numbers tell a different story this year, with median AUM of the 500 largest managers up 3.5% over the year to $45.6 billion.

"Had those numbers gone in the other direction, we would have said it was evidence of continuing concentration in the industry — in this case, it is not what the numbers are saying, so (it) is a slightly surprising data point in that sense," Mr. Collie said.

Assets under management by region were damaged by falling equity markets in 2018.

"The net (value) of available assets to invest is growing in places like China," Mr. Collie said, which "allows the domestic asset management market to grow just on the back of domestic assets — (money managers there are) not having to sell outside their own markets to have opportunities to grow."

"One of the things that has been high in my mind for a number of years is when you look at the asset management industry as a whole, because it's becoming more globalized and there are more connections around the world, we're getting more similarities" when it comes to management, staff and investment styles.

"So occasionally you need a breath of fresh air. It's important to the market that we have truly diverse asset management activity," Mr. Collie said, highlighting that diversity within active management is particularly important.

"If half the assets are managed by people looking from different perspectives and emphasizing different things, that's a pretty vibrant market; if it's all just the same type of people hiring the same type of people, it's a less vibrant market," he said. "Playing into that story, you have the beginnings of the establishment of a significant asset management community in places like China and other different markets than where we've traditionally been looking. We hope that this can bring a very new perspective on asset management, and create a richer, more diverse community for asset management globally," Mr. Collie added. 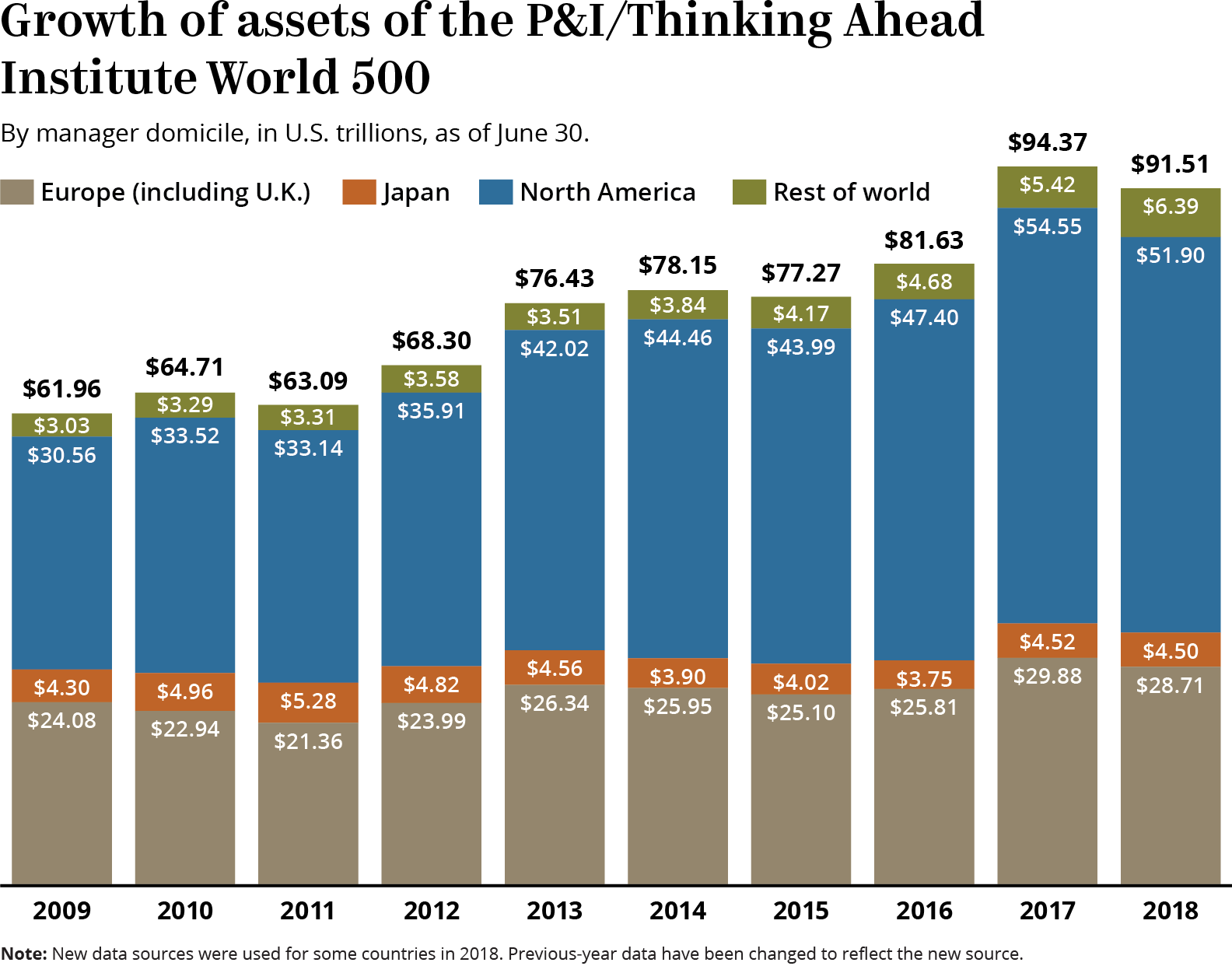 The application of environmental, social and governance factors to money management remained stable and continued to show growth in 2018.

Factor-based strategies, however, lost assets in 2018, with allocations falling 6.2% to $1.71 trillion. Figures are based on a subset of managers that have provided relevant data for all years since 2014.

Looking ahead, Mr. Collie said a trend playing out for money managers is the recognition of "the importance of culture within firms. … It's not just a nice-to-have: It's actually pretty much the heart of the firm — especially in a people business like this. We are seeing a trend toward people being more deliberate and conscious about culture," he added.

Going up, going down: Seeing change over a decade
Funds fail to repeat success in 2018
Recommended for You