Creative approaches to asset allocation and structural changes to keep retirement systems from morphing into rainy day funds are topics policymakers could find themselves grappling with as they look to move forward again after a year that saw many running just to stay in place, analysts said.

If much about the outlook remains uncertain, it's clear debt-laden governments will be more constrained and capital market returns will be less generous over coming years — a tough backdrop as rapidly aging societies make the need for reforms more urgent, said David Knox, Melbourne-based senior partner with Mercer Australia and lead author of the annual Mercer CFA Institute Global Pension Index.

The average index ranking for the 39 national retirement systems covered in Mercer's 2020 report — a mix of ratings for (a) the adequacy of retirement benefits, (b) the sustainability of that level of benefits and (c) how transparently and efficiently the system is run and governed — slipped only marginally to 59.2 from 59.3 the year before but Mr. Knox warned that the effects of the pandemic would be felt with a lag.

Reforms aimed at extending coverage of work-related retirement plans and encouraging private savings took a back seat last year as the pandemic forced governments to focus on threats to the health of their citizens and their economies.

Thinking about the ‘now'

Retirement system overseers are thinking about the "now" and it could be some time before they focus again on the long term, said Josef Pilger, Sydney-based partner and global pension and retirement leader with Ernst & Young Global Ltd. "Meaningful reforms may take some time," he predicted.

In less than a year since COVID-19 exploded onto the world stage, governments took on trillions of dollars of debt to keep their economies afloat, setting the stage for retirement promises to come under pressure at some point in the future, Mr. Pilger said.

The bottom line: "People are going to have to become more self-reliant and rely less on governments" for their retirement needs, Mr. Knox predicted.

On that score, 2020 wasn't entirely a write-off on the reform front.

It was a challenging year, "but we did see some things that really give us hope that … emerging markets are moving toward a brighter picture," said Calvin Chiu, Hong Kong-based senior managing director and head of Asia retirement at Manulife Investment Management.

Despite the distractions of having to put out COVID-related fires last year, there were governments that "continued patiently trying to do the hard work of improving coverage and expanding access," agreed Eric Shimp, Principal Financial Group's Washington-based vice president, international government relations.

For example, said Mr. Chiu, following years of study, China's long-anticipated launch of a third pillar private pension, composed of fund-of-funds offerings, appears "imminent," a debut will mark an important step toward the country's build out of a multipillar retirement system.

Mr. Shimp cited Mexico as a paragon, with its December passage of a "landmark pension reform bill that will more than double contributions to retirement savings" by 2030.

And Taiwan's government is exploring putting in place a Pillar Three platform where people can choose underlying investment products for their retirement savings, Mr. Chiu noted.

But to the extent growing numbers of retirees in emerging markets are facing the need to make decisions on how to invest their retirement savings, the current moment — with the extraordinary monetary policy response to the crisis slashing sovereign bond yields and pushing equity prices to record levels — could be an unforgiving one, some argue.

Peru is one of several countries that permitted extra withdrawals in the wake of the pandemic.

Asset allocation at present will prove a challenge, Mr. Knox said, with low returns on government bonds potentially driving pension funds or individuals in defined contribution systems into higher-risk assets. If assets look set to compound at 1% or 2% instead of 6%, "what sort of behavior will that bring about?" he said.

The challenge of the current "lower for longer" moment in capital markets goes beyond sovereign bond yields, Mr. Pilger noted. If, as some analysts expect, average returns from equity allocations — the biggest contributor to portfolio returns for most retirement systems — are set to drop below 5% from above 8%, that lower rate of compounding will deliver smaller pension and retirement pots, he said.

Keith Ambachtsheer, Toronto-based president of KPA Advisory Services Ltd., struck a more hopeful tone on that point. In a September note on pension design and management, he said for retirement funds capable of taking a long-term view, investing in a diversified portfolio of high-quality, high-dividend stocks can still deliver annualized real returns of 4% a year with acceptable levels of risk.

Another challenge looming large as a new year begins is how to better shield retirement pots from being re-directed to provide short-term financial support at times of economic crisis, like the present, marked by a spike in global unemployment.

Governments in developed as well as developing countries responded last year by letting citizens tap their retirement savings to get through the crisis.

Stopgap measures allowing hardship withdrawals have long been in place in Latin America, but withdrawals on the scale of the past year haven't been seen before, said Ernesto Brodersohn, CEO of non-profit network Pension Policy International and a consultant for the World Bank, speaking in a personal capacity. 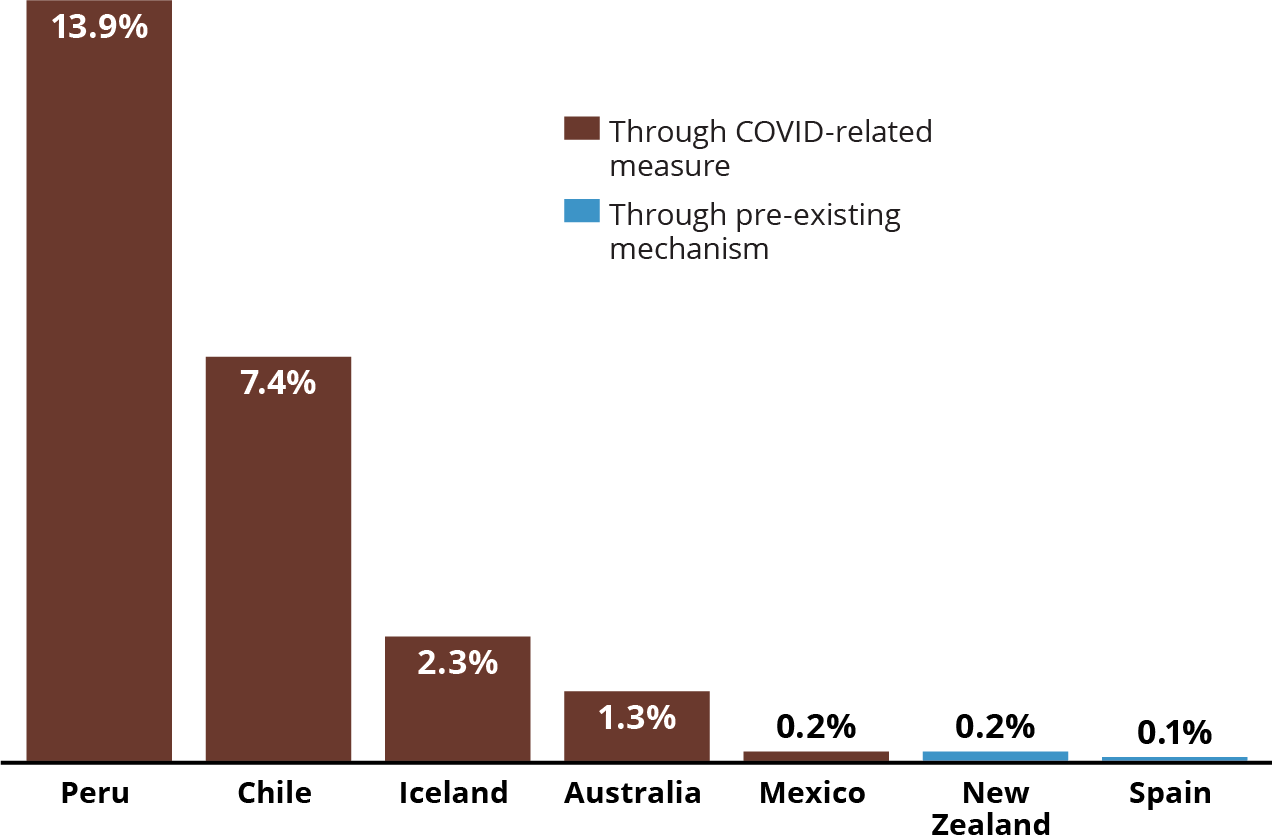 "When the pandemic hit, there was pressure to give money to the population, and Peru and Chile allowed (savers) to raid the pension system to appease some of this discontent," said Gustavo Medeiros, deputy head of research at Ashmore Group PLC, London.

In 2020, extra withdrawals were permitted in a number of developing countries:

In Asia, meanwhile, Malaysia's government in April initially allowed participants in its 942 billion ringgit ($233.4 billion) Employees Provident Fund, Kuala Lumpur, to withdraw 500 ringgit a month from their retirement savings and followed that up toward the end of the year with a broader program letting 8 million of the system's more than 14 million participants make larger withdrawals. Roughly $5 billion was withdrawn over the first two weeks of applications being accepted.

Analysts warn of the long-term costs of such moves, which could see the most vulnerable segments of the retirement savings universe in emerging markets countries emptying their accounts and either losing out on the magic of compounding or falling out of the system altogether.

Developing countries with less robust health-care systems have been especially vulnerable in the current crisis, and to the extent countries such as Chile and Peru have allowed workers and retirees to make "massive" withdrawals from funded defined contribution systems, it "bodes ill for future retirement plans," Olivia S. Mitchell, Philadelphia-based director for the Boettner Center for Pensions and Retirement Research at the University of Pennsylvania's Wharton School and executive director of the Pension Research Council, said.

Retirement systems and local investors are the backbone of the economy and allowing those systems to be continuously depleted over time "could impact financial stability" in countries, Mr. Medeiros added, throwing open the doors of their retirement savings.

Market veterans, while conceding such withdrawals can't be avoided at times of acute financial distress, said limiting them as much as possible is essential.

"I can understand why (retirement systems) enabled some people to access some of their money" but this has to be a one-off, Mercer's Mr. Knox said. The overriding purpose of pensions must be to preserve money for retirement, he said.

Easier said than done, warned Ernst & Young's Mr. Pilger. "I wonder if they opened the floodgates here," as participants who didn't take advantage of this round of withdrawal opportunities could feel justified in tapping their retirement savings if they face financial troubles in the future, he noted.

Some analysts said working to put a safety net in place that can cover a broader array of needs people face over the course of their lifetimes could be the answer to better preserving retirement savings pools.

"Retirement savings arrangements could be more resilient and address the challenges posed by the need of early withdrawals brought about by COVID-19, if long-term savings arrangements include both a savings account earmarked for retirement and a savings account for emergencies," Stephano Scarpetta, director, OECD Directorate for Employment, Labour and Social Affairs, and Greg Medcraft, director, OECD Directorate for Financial and Enterprise Affairs, wrote in the 2020 pension outlook released by the Paris-based Organization for Economic Co-operation and Development on Dec. 7.

A lot of the people withdrawing retirement savings now are dropping out of the formal sector of the workforce into the informal sector, Mr. Brodersohn noted. "There needs to be a more overarching pension policy and pension reform discussion about helping the informal sector build resilience," he said.

Mr. Pilger said the challenges that retirement savings pools have faced during the crisis could spur more interest in approaches that encompass a broader mix of financial well-being — such as Singapore's Central Provident Fund, which helps participants save for retirement, housing, medical care, education and other needs.

Mr. Ambachtsheer called systems like Singapore's and Malaysia's, which likewise helps participants to save for a range of financial needs, "great examples of integrative thinking at a policy level."

"My hope is that more countries will move to thinking and acting this way in the years ahead," he said, while warning "it will not be easy."

ESG rules for private markets begin to sprout up

Sponsored Content: An Active Approach to US Mid-Cap Equities for DC Plans