Uncertainty for pre-pandemic assets, but hope lies with post-crisis opportunities

Arleen Jacobius
Reprints Print
Anthony D. Tutrone said this downturn is different because some sectors have been more affected than others.

When it comes to returns, private equity managers envisage a tale of two portfolios, one with uncertainty surrounding pre-pandemic assets and another of great expectations for post-COVID-19 investments.

Asset owners have been pinning their hopes of reaching their total fund expected rate of returns on private equity. For example, Oregon Investment Council's most recent capital market assumptions provided by its general investment consultant, Callan LLC, include an expected annual private equity return of 9.2% for 2020 through 2029, the highest of any asset class in its portfolio, according to agenda materials from the council's June 3 meeting. The $75 billion Oregon Public Employees Retirement Fund, Salem, has a 17.5% current long-term private equity allocation.

Private equity managers are going into this crisis after a record fundraising year. In 2019, U.S. managers raised a combined $888 billion in 1,064 alternative investments funds, the most capital raised on an annual basis, according to PitchBook. Of this total, private equity amassed the most of any sector with $474.1 billion, debt at $131.1 billion and venture capital at $75.5 billion. Private equity and venture capital funds raised $133 billion worldwide in the first quarter, a 12% increase from the year-earlier quarter. Meanwhile, private equity earned internal rates of return of 10.17% for the year and 14.58% for the 10 years ended Sept. 30, PitchBook data show.

Private equity funds raised in a period of market dislocation typically have stronger returns, said Anthony D. Tutrone, New York-based managing director, global head of the alternatives business at Neuberger Berman Group LLC, which had $96 billion in alternative assets as of March 31. In past downturns, many private equity managers were able to make investments that did well when the market rebounded, he said.

But the crisis that touched off the recession is different this time.In the past two downturns, there was broad across-the-board repricing of assets that lasted for multiple quarters, with slow improvement after the markets hit bottom, Mr. Tutrone said.

This time around the mispricing in the public markets was not across the board. Some areas, such as software company valuations, did not drop that much, while other areas such as hospitality and retail were down significantly. But the bounce back was quick in most sectors, he said.

"We think there is going to be opportunities to make high returns as a result of this dislocation," Mr. Tutrone said.

There also will be greater dispersions of returns among private equity firms than there has been in past downturns. Only those managers able to identify areas that come back strongly will perform well, he added.

"In the last downturn, the rebound was across firms and there was less distance between good firms and mediocre firms," Mr. Tutrone said. "COVID exposed weaker business models and weaker industries."

According to Neuberger Berman data, in the first quarter, buyouts marked down between 5% and 20%, with U.S. large-cap buyouts down 12% on average and small- and midcap funds down 8% on average, he said. U.S. large-cap buyout funds fell more in the first quarter because those funds contained a larger percentage of public equities, which tumbled in the quarter but are already rebounding. Large-cap buyouts also have better public market comparables, whereas smaller funds are less volatile, only marking their portfolios to market twice a year.

If the public markets stay at current levels, there could be fewer markdowns in the second quarter than in the first quarter, but in reverse with larger funds having smaller drops in valuations than smaller funds, Mr. Tutrone said.

"Some smidcap companies are more vulnerable to having more significant operational issues than large companies," he said. 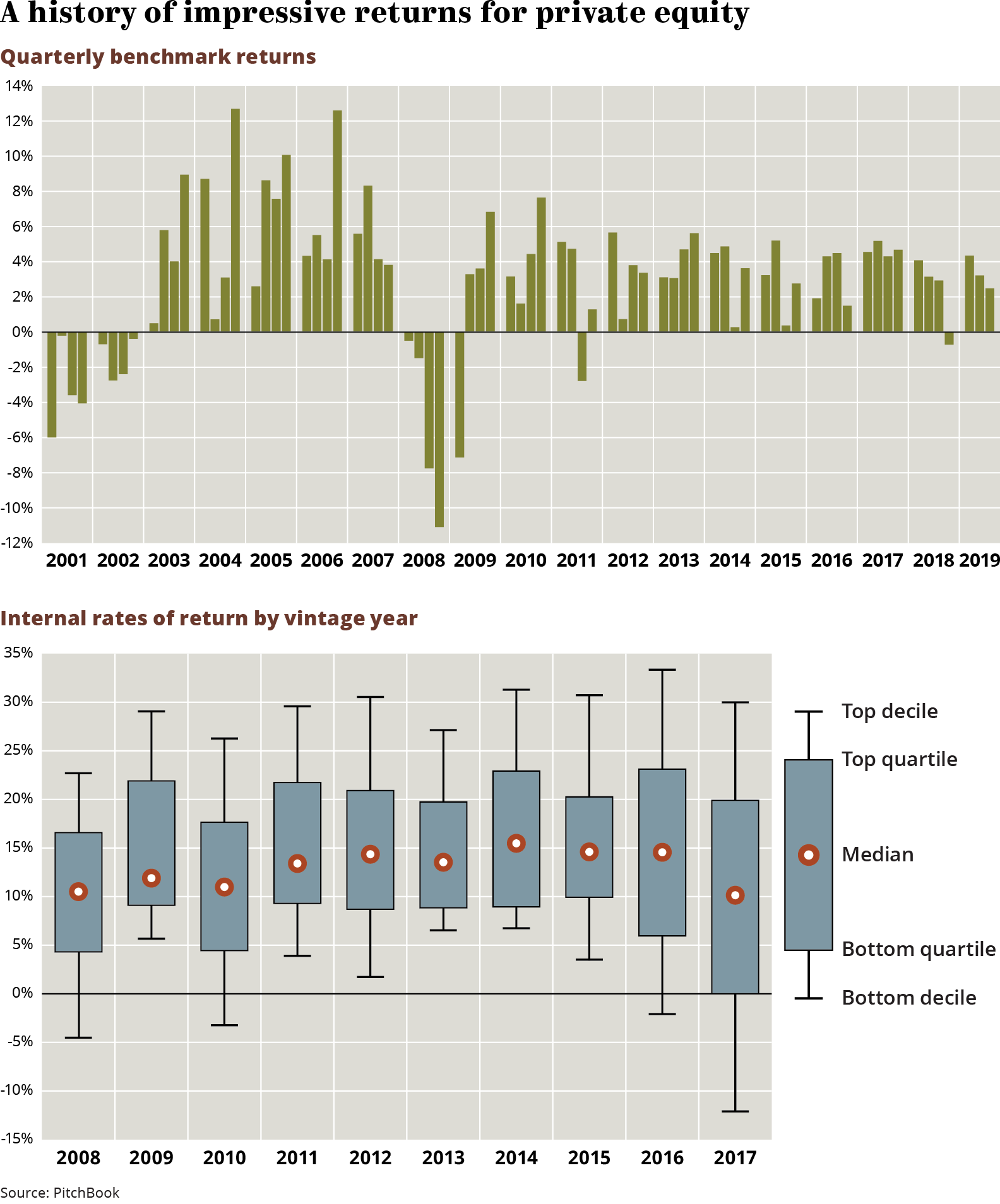 So far, the pandemic has accelerated existing sector trends, said Brad Dorchinecz, Chicago-based managing director for 50 South Capital, a unit of Northern Trust Asset Management with $9.1 billion in private equity assets under management and advisement. The issues in retail "did not happen overnight," he said. The pandemic pushed some high-profile companies into bankruptcies but the COVID-19 crisis accelerated the distress in the retail sector, Mr. Dorchinecz said.

"Private equity managers have generally pivoted away from retail or pivoted to consumer service from consumer products," he said.

At the same time, software companies have been top performers for private equity firms and are expected to continue to outperform in the crisis, Mr. Dorchinecz said. "Often software is mission critical for companies" because they run their businesses on software platforms, he said.

Overall, private equity internal rates of returns on current portfolios could be dampened should managers need to hold onto companies longer, said Scott Hart, La Jolla, Calif.-based co-CEO and private equity practice leader of the StepStone Group LP. While it is difficult to know with any precision how current private equity portfolios will perform, investments made before the global financial crisis took longer to generate returns, Mr. Hart said.

Close to 40% of the pre-global financial crisis transactions were done in 2007 and 2008, Mr. Hart said. These investments went on to generate two times their investment but there were increases in hold periods and loss-making investments.

"Both will put pressure on returns compared to expectations and original underwriting," Mr. Hart said.

That points to the importance of diversity in portfolio construction, he said.

Industry sectors that were thought to be resilient in a recession, such as technology, software and health care have not been completely COVID-19 resilient but have held up better than most other areas, Mr. Hart said.

A lot of private equity firms have been focused on assessing their current portfolios on a company-by-company level, he said. Even firms with dry powder available may need to seek creative financing solutions to support current portfolio companies.

Much of the available dry powder is typically reserved for new transactions, he said. "We will see situations where certain funds have not appropriately reserved follow-on capital, especially those in which the entire portfolio is hit at once," Mr. Hart added.

One solution could be general partner-led secondary transactions, in which some companies are rolled into a new fund with fresh capital, while existing limited partners are given a choice of cashing out or rolling into the new fund, Mr. Hart said.

To be sure, this time around there are much more varied sources of debt available for private equity managers than there were in the 2008 financial crisis, said Sanjay R. Mansukhani, director, private equity in the New York office of Willis Towers Watson PLC. But some of these will require private equity firms to give up some returns for safety, he added.

"Expect to see more non-traditional ways of earning returns, with PE firms teaming up with debt providers to limit downside while giving up some upside in the near term," Mr. Mansukhani said.

At the same time, the pandemic and resulting recession are making private equity managers focus on new areas for investment.

"Anything that can be done remotely is going to see an acceleration of interest from private equity," he said. "Private equity has been nibbling around on the heels of this. Now you will likely see private equity firms that have not paid that much attention to these businesses doubling down."

Most industry experts acknowledge there are a lot of market unknowns in the post-COVID-19 world.

"There is a very limited amount of information that is out there right now" as to the depth and duration of the crisis and the recession, said Michael Granoff, New York-based CEO of private equity fund-of-funds and secondary markets manager Pomona Capital, which has $5 billion in AUM.

"If you own a grocery delivery service or Clorox manufacturer, you are doing quite well," he quipped. "Nobody did buyout modeling of zero revenues."

Whether a private equity manager is at the top or bottom in the dispersion of returns depends on how well that manager was positioned for a downturn, Mr. Granoff said.

In 2019, a year in which there was a record amount of deal flow, Pomona executives invested in less than 1% of the available transactions, he said.

"We became a seller of assets to proactively manage our portfolio," Mr. Granoff said.

Today, managers have more pricing power than they did a year ago but there is also greater risk, he said.

"We have to be very careful what we buy because there won't be a rising tide coming very soon to lift all boats," Mr. Granoff said.

While Pomona executives might have invested in a cruise line last year, they would no longer be interested today, he said. Meanwhile, there are companies in areas such as telemedicine that look a lot better now than they did before.

Some managers will be very well-positioned in the current environment, StepStone's Mr. Hart said. Private equity firms with dry powder that don't have to fundraise in what is now a difficult environment and that are, therefore, playing offense are in the best position, he said.

With some areas of private equity such as growth equity taking on more risk before the pandemic, some of the better-performing managers may be ones that stuck to their strategy, said Chris Sugden, managing partner at Edison Partners, a $1.6 billion growth equity firm. Some growth equity managers had started making investments that were more like venture capital-type investments in that they concentrated on potentially high-growth companies, he said.

"The good news is there are still GPs that do value … great businesses that might take several years to grow," he said.

Even so, new transactions pretty much stopped in April and May, he said. Any deals that are being announced these days most likely were negotiated before the recession, Mr. Sugden said.

"We're still meeting new entrepreneurs but the real challenge is pricing and valuation," he said. "Everybody is trying to figure what the pricing should be."

For now, Edison Partners executives are telling portfolio companies to plan for a longer recession.

Transactions are also slow for private credit managers because public debt is priced such that the managers don't have too much risk, Mr. Sugden said.

Crisis highlights debt structure in health care and its effects