After a modest decline the previous year, assets of the world's 300 largest retirement funds rebounded by 8% to $19.47 trillion in 2019, in what would prove to be the calm before 2020's coronavirus storm, according to the latest annual survey by Pensions & Investments and Willis Towers Watson PLC's Thinking Ahead Institute.

With the latest year's tally, growth for the past five years averaged a respectable 5%, said Marisa A. Hall, London-based co-head of the Thinking Ahead Institute, in an interview. But in the wake of the COVID-19 crisis and the extraordinary policy response to it, the outlook for the coming five years looks considerably tougher, Ms. Hall added.

The latest survey showed big funds were facing a challenging environment even before the unprecedented market and policy fireworks of 2020.

Retirement plans in 2019 were "increasingly stretching their risk budgets," even as they worked to add governance muscle in order to take on more risk in a responsible way, the survey report noted.

Solvency concerns were driving plan executives further out along that risk spectrum last year as they struggled to match their liabilities, Ms. Hall said. Meanwhile, it's uncertain whether conditions this year — even further removed from business as usual — may yet become a new normal, she added.

The survey report found that along with solvency concerns, "stakeholder expectations, COVID-19 ramifications, sustainability pressures and other challenges have compounded to make pension fund boards' agendas more complex and stressed than at any previous times."

In response, big funds in 2019 continued "to develop stronger governance capabilities supported by larger spends on people and technology," the report said.

At a moment when the global economy remains in a deep hole and unorthodox policy action by governments and central banks remains likely, governance is all the more important, Ms. Hall said. "It's definitely new times" and with further disruption to come, "having strong beliefs (and) being able to be responsive while still sticking to what your intentions and your objectives are as an asset owner" will be valuable, she said. 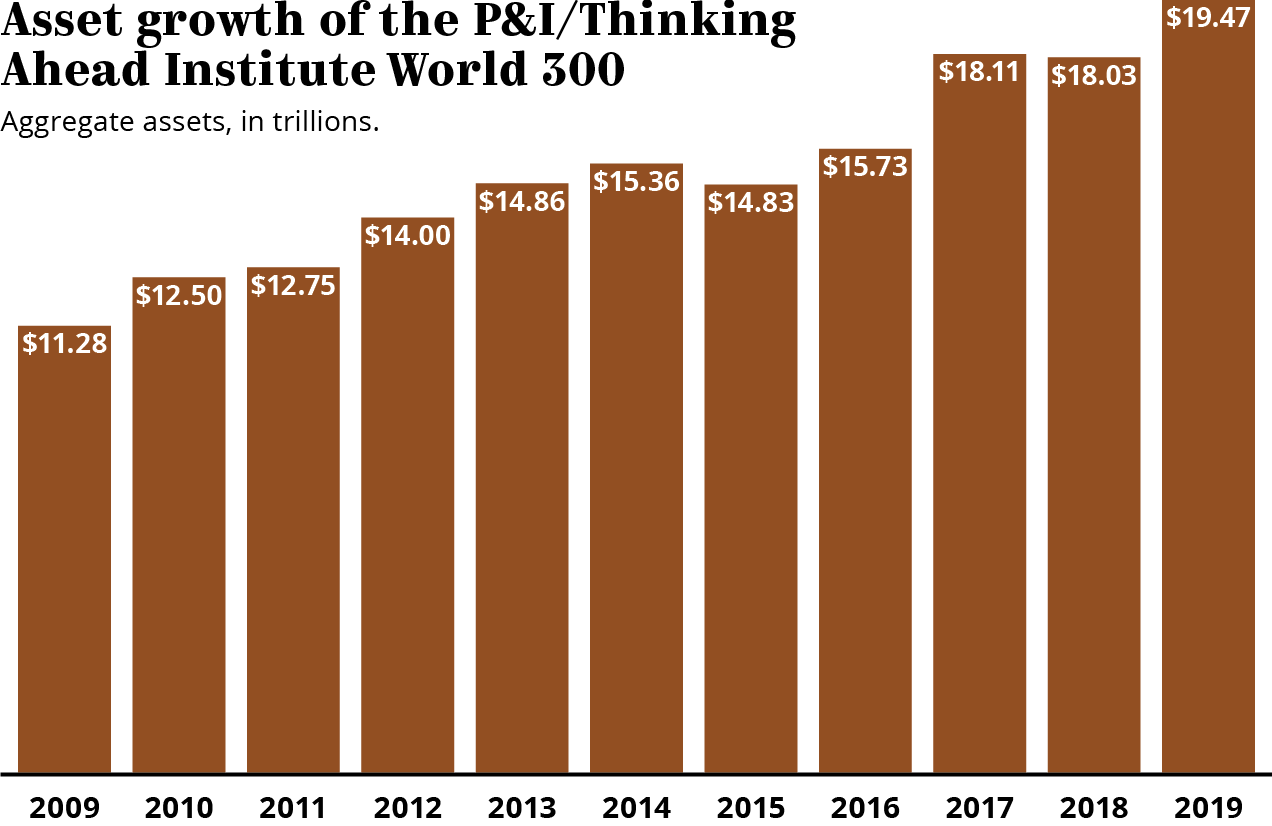 If the largest funds are at the forefront of that focus on governance, the payoff in 2019 — when asset growth for the 20 largest funds exceeded that of the top 300 by a mere tenth of a percentage point — wasn't stark, but Ms. Hall said that year's relatively benign global markets didn't pose the kind of governance test that an uglier market environment would, like the one retirement plan executives have faced in 2020.

"This is where having that investment in stronger governance capabilities will pay off," Ms. Hall predicted.

Over the five years through the end of 2019, the survey showed a stronger correlation between size and asset growth, with the top 20 funds delivering annualized gains of 5.5%, 30 basis points better than the next 30 funds and more than a full percentage point above the bottom 250 funds.

For the latest year, with a strong capital markets tide lifting most boats, the survey's 20 largest funds saw their combined assets climb 8.1% to $7.93 trillion — a 40.7% share of top 300 assets that was unchanged from the year before.

While the top 20 cohort for the latest survey was unchanged from the year before, relatively strong gains for Asia-Pacific-based funds saw them edge higher in the rankings.

The seven Asia-Pacific funds in that bulge-bracket grouping saw their combined assets jump 10.6% for the year, higher than the 8.6% asset growth for the group's four European funds and the 2.9% growth logged by its seven U.S. funds. (Two Canadian funds in the top 20 both reported healthy gains for the year, with the Toronto-based Canada Pension Plan Investment Board's assets rising 9.7% to $315.3 billion and Ontario Teachers' Pension Plan, Toronto, up 14% at $159.7 billion.)

That surge in Asian assets shouldn't be seen as a one-off, Ms. Hall said. Over the past five years, the assets of Asia-Pacific funds in the top 300 posted annualized growth of 7%, exceeding North American funds' 5.1% growth and European funds' 2.8% gains, she added.

With the survey's rankings tabulated in U.S. dollar terms, the greenback's gains against most currencies over the past five years left the dollar-denominated growth of retirement assets in most countries lagging their growth in local currency terms. Japan, where the yen appreciated vis-a-vis the dollar by an annualized 2% over that five-year span, and Switzerland, with an annualized 0.5% gain, were the only exceptions. But in countries such as Australia, whose dollar weakened by an annualized 3% against the U.S. dollar, annualized retirement asset growth of 12.24% in local currency terms became 8.88% in U.S. currency terms.

A good portion of the relative strength in asset growth for the Asia-Pacific region can be tied to the top-ranked retirement plan, Japan's Government Pension Investment Fund, Tokyo, which in late 2014 more than doubled its target allocation for equities and slashed its holdings of Japanese government bonds, said Ms. Hall, while adding that other factors — such as relatively high outflows for more demographically mature U.S. pension plans — could be at work as well.

At the broadest level, however, the Asia-Pacific region's vibrant growth clearly contributed to its recent momentum — and should continue to do so, she added.

For the latest rankings, GPIF remained king of the hill with a 13% gain to a survey-topping $1.56 trillion in assets — just less than half a trillion dollars ahead of the next biggest fund, Norway's Government Pension Fund Global, Oslo. GPIF's assets have grown 36.8% over the five-year period, according to P&I/TAI data.

Just behind those funds, an 11.2% gain for South Korea's National Pension Service, Jeonju, to $637.3 billion was enough to take third place in the rankings away from the Washington-based Federal Retirement Thrift fund, which rose 3.8% to $601 billion.

Four other big Asian funds edged up as well in the latest survey: Singapore's Central Provident Fund, with a 10% gain to $315.9 billion, nosed out CPPIB for eighth place; Malaysia's Employees Provident Fund, Kuala Lumpur, with a 12.1% increase to $226.1 billion, climbed one spot to 12th; the Tokyo-based Pension Fund Association for Local Government Officials, up 12.3% to $224 billion, rose two spots to 13th place and India's Employees' Provident Fund, New Dehli, up 15.6% to $168.1 billion, advanced one rank to 17th place.

Allocations at the asset class level for the top 20 were little changed from the year before, but that masked interesting stories within asset segments, including a greater focus on "more resilient and diversified credit portfolios, increased allocations to private markets ... and more targeted impact investments," Ms. Hall said.

A simple average for the top 20 funds showed a 40.2% equity weighting, down from 40.6% the year before, even as markets rebounded strongly from a fourth-quarter plunge in equity markets around the world in 2018.

Regional comparisons for those top 20 funds showed Asia-Pacific funds with the biggest allocations to bonds, at 51.7%, and the smallest to alternatives and cash, at 5.4%.

North American heavyweights, by contrast, had the biggest allocations to alternatives and cash, at 34.8%, and the smallest to bonds, at 21.3%.

The survey showed the biggest European funds with the heaviest allocations to equities, at 50.9%, followed by North American funds with 43.9% and Asia-Pacific funds with 42.9%.

For the latest year, defined benefit plans accounted for 64.2% of top 300 assets, down marginally from 64.7% the year before, while defined contribution plans saw their share moving in the other direction, edging up to 24.2% from 23.9%.

Assets in reserve funds, set aside by national governments to prepare for future retirement payments, likewise rose modestly to 10.9% of total top 300 assets from 10.6% the year before, while hybrid plans, which offer a combination of DB and DC features, held steady at 0.8%.

North America and the Asia-Pacific region continued to report a preponderance of DB assets, with 74% and 65.1% of total assets, respectively, with Europe reporting a 53.2% share.

Meanwhile, North America reported 26% of its assets in defined contribution plans, followed by the Asia-Pacific region with 25.9%. Europe, where Norway's huge fund contributed to just under a third of the continent's assets falling in the reserve fund category, reported only 12% of its assets in DC plans.

Public-sector pension funds accounted for the biggest share of the $19.5 trillion total for 2019, at 39% or $7.7 trillion, followed by sovereign wealth funds, at 29% or $5.6 trillion. Corporate pension funds came next with a 17% share, or $3.3 trillion. Private independent funds, such as multiemployer funds, rounded out the survey with a 15% share or $2.9 trillion.

Biggest funds increase 11.5% to hit $21.7 trillion in 2020
The P&I/Thinking Ahead Institute World 300: The largest retirement funds