In a year of strong returns in which equity markets and risk-on fixed income performed well, worldwide indexed assets under management rose 35.9% to $20.87 trillion as of June 30 for money managers that participated in Pensions & Investments’ annual survey.

That’s up from $15.35 trillion in passive strategies one year earlier.

Looking for the Perfect ETF for Your Portfolio?
Visit the P&I ETF Exchange

John Delaney, senior director, investments, and a portfolio manager at Willis Towers Watson PLC in Philadelphia, said when the U.S. Federal Reserve and central banks across the globe signaled their active support of markets following the onset of the COVID-19 crisis, investors went cautiously risk-on and that sentiment continued through the end of 2020.

“Whether it’s equity beta or credit beta exposures, whether that’s indexed or ETFs, it was a quick way to kind of rebound and take advantage of the supportive environment that was being created by central banks over the course of the second quarter, third quarter, fourth quarter (of 2020),” he said.

Mr. Delaney said many investors rebalanced into beta exposures, while S&P 500 index strategies, indexed ACWI, and risk-on fixed-income beta (such as high-yield and fallen angel indexes) performed well through the end of 2020.

Bloomberg
An investor checks their investments on a mobile device.
Passive equity up 55.1%

Growth of index assets
Assets managed internally, including passive and enhanced strategies, in trillions, as of June 30, 2021. 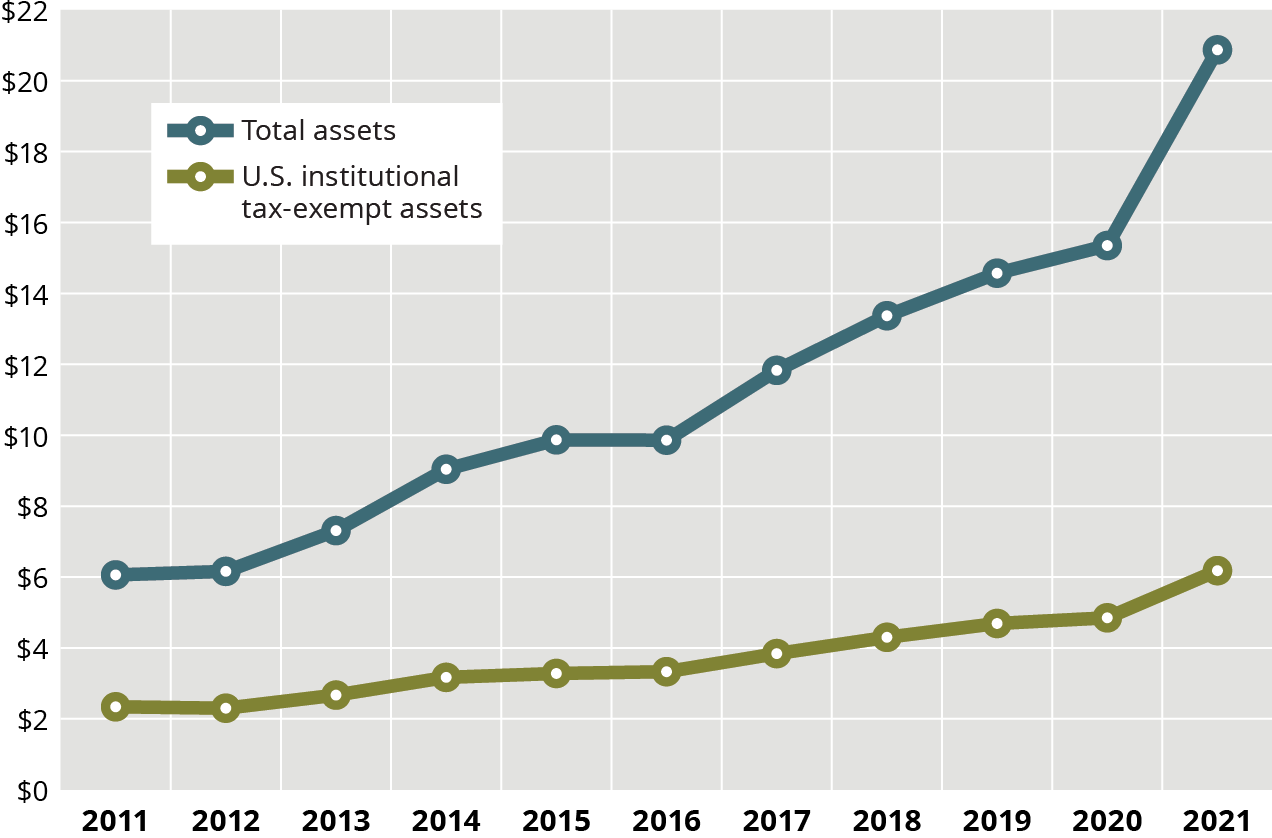 Beta products were “very important in terms of allowing institutional investors to get quick exposure that allowed them to recover quicker from the drawdown period we saw in March 2020 and allowed them to get their returns back on track in the recovery,” Mr. Delaney said.

He said investors continued to overweight on the passive side through the end of 2020 but the sentiment shifted, somewhat, in 2021.

“What we’ve done in our portfolios is rotate a bit from those beta exposures that we were overweight in 2020 and early 2021, and access a little bit more skill. So I think if you were looking at a chart of flows from 2020, you would have seen heavy flows into index and ETF products in the second and third quarter of 2020. Then, as the clock turned to 2021, (you would have) seen some rotation out of that into more active management or specialized exposures that investors are looking to get,” Mr. Delaney said.

But Vanguard sees room for the continued growth of passive investments.

Rich Powers, the Malvern, Pa.-based head of ETF and index product management at Vanguard said: “While the concept of indexing is now pretty well recognized as the appropriate starting place for most investors to build portfolios, we’re still optimistic that there’s more uptake to be had here. There’s still a large portion of client assets that are in expensive, active mutual funds that could benefit from being invested in a low-cost, broad market fund that gives them market exposure. I believe we’re still in the early days of adoption here, particularly on the fixed-income side.”

The adoption of fixed-income ETFs has been on an upswing since the crisis period in spring 2020, Mr. Powers said, when ETFs helped investors get the fixed-income exposure they wanted despite historically low liquidity in the bond market. He said about 60% of flows on the passive fixed-income side at Vanguard have gone into ETFs instead of mutual funds.

“We’re on pace for another record year for fixed-income ETFs, in terms of cash flows, but equity flows (into ETFs) have been much more significant. Not surprising given the upward sloping returns that we’re seeing in the equity markets,” Mr. Powers said.

Vanguard is seeing about 95% of cash flows in equities moving into ETFs rather than index mutual funds, he said, with broad market equity strategies, such as S&P 500 or total market ETFs, attracting the largest share of assets.

BlackRock remained the largest manager of worldwide indexed assets managed in ETFs and ETNs in 2021, its assets in those strategies rising 32.5% to $3.02 trillion as of June 30. Carolyn Weinberg, managing director and global head of product of the iShares and index investments business at BlackRock in New York, said that from an institutional perspective, the company continues to see an expansion of use cases.

“Our institutional clients who have traditionally not been ETF users have become ETF users, I would say for two main reasons. One was liquidity and two was transaction costs,” Ms. Weinberg said.

Investment managers and institutional investors bought fixed-income ETFs that reflected their areas of expertise and their needs during the bond market’s liquidity crisis in 2020, she said, but ETF use has expanded over the course of the past year.

“So while they may have only used one ETF in the past, or last year, some of them are using 10 or 20 of our ETFs this year, which is pretty exciting. In some cases they’re selling and they’re buying, which is great. That’s the whole point of liquidity and the whole point of transaction-cost alpha,” Ms. Weinberg said.

James Martielli, head of investment solutions at Vanguard in Malvern, Pa., said index-based ETF strategies are increasingly adopted by advisers and individuals, but defined contribution plans and large institutions are increasing their use of collective investment trusts and using a core lineup of index products within the trust.

The essential features of ETFs, such as tax advantages and continuous trading, are useful for many investors but are not equally attractive for the longer-term horizon of DC plans, he said.

He said the ability to structure a CIT with a “core tier” composed of index-based funds that give broad, low-cost exposure to U.S. equities, non-U.S. equities and U.S. bonds at a lower cost than mutual funds has attracted retirement plan sponsors. Mr. Martielli said 67% of the plans Vanguard record keeps now offer CITs with a core tier of index-based funds, up from 44% 10 years ago.

As a firm, Vanguard is expanding access to collective investment trusts, he said, noting that the firm lowered the minimum for investments in a target-date fund CIT to $100 million from $250 million.

“And we’ve been early supporters of some bipartisan legislation to expand (CIT) access to 403(b) plans, which are predominantly non-profits, and we’re encouraged to see that’s included in the SECURE Act 2.0 bill,” Mr. Martielli said.

CITs typically have lower costs and more flexibility than the types of annuity contracts and mutual funds in which 403(b) plans are currently limited to investing in.

Looking beyond the expense ratio, Mr. Martielli said other nuanced differences are leading some plan sponsors to CITs rather than mutual funds.

“International equity funds, particularly ones that are directly invested, can benefit from a more favorable withholding tax treatment that, many times, can be greater than the basis-point differences in fees. And then we’re getting a lot of questions from clients about transparency in securities lending and who’s actually benefiting from the securities lending revenue and what sort of risks you’re taking,” he said.

Vanguard is the largest U.S. defined contribution index manager in P&I’s universe, with $1.42 trillion in indexed DC assets as of June 30, a 32.71% increase over the previous year. Mutual funds, which account for 61% of Vanguard’s total worldwide indexed assets, rose 27.1% to $3.8 trillion as of the year ended June 30. Vanguard has been the largest manager of indexed mutual fund assets since P&I’s survey began in 2006