Money managers have installed new metrics and policies across their businesses as part of their continuing efforts to promote the importance of having women represented in senior roles.

The latest moves include the use of technology to track progress and increased education to help retain and promote women within money management firms.

A number of studies have shown that improved company performance can come with increased gender diversity in the workplace. A 2018 study by McKinsey & Co., for example, found that companies in the top-quartile for gender diversity in their executive teams were 21% more likely to outperform on profitability. These firms were also 27% more likely to have "superior value creation," the study said.

"At Goldman Sachs Asset Management, we believe that having a diverse team is as important as having a diverse mix of investments in portfolios," said Chairman Sheila H. Patel, London. "When people look at the world differently, they find more solutions to problems and have a better shot at generating strong returns. One area of importance for us is gender diversity."

The firm's fundamental equity investment group is co-headed by Katie Koch and more than half their assets are run by women, Ms. Patel said. GSAM has $1.8 trillion in total assets under supervision. The firm is also "playing an active role in improving the diversity of corporate boards by voting against nominating committees anywhere in the world that fail to include at least one woman," an initiative that came in very recently, Ms. Patel said.

Northern Trust also established new policies around diversity when it comes to interviews. "We have been informally working with partners in HR, talent and recruitment to make sure we are bringing in diverse candidates," Mr. Thomas said. "We also make sure the interview panel is diverse — that's often overlooked."

Increasing female representation at NTAM has been a global effort. The firm's Europe, Middle East and Africa team participates in the Women in Finance Charter — a U.K. organization aiming to build a balanced and fair financial services industry.

"I believe if you're serious about diversity, you have to start from the top down. One of my concerns has been that so many (firms) go from bottom up," Mr. Thomas said, indicating that a broad intake of employees at a junior level will probably bring a gender balance without focused efforts — but will not necessarily translate to higher female representation in more senior roles.

The firm has put in place a number of programs to promote gender diversity, and 44% of NTAM's hires last year were women, "higher than we have experienced historically — I'm proud of that," Mr. Thomas said. And 35% of promotions at the firm applied to women, up from 26% the year before.

"If you start at the top of asset management, we have 15 members of the executive management team. Six are women. Four have come onto that team in the last few years," Mr. Thomas said. He added that the managing team is also diverse in terms of ethnicity, with nine of the 15 either female and/or from ethnically diverse backgrounds. 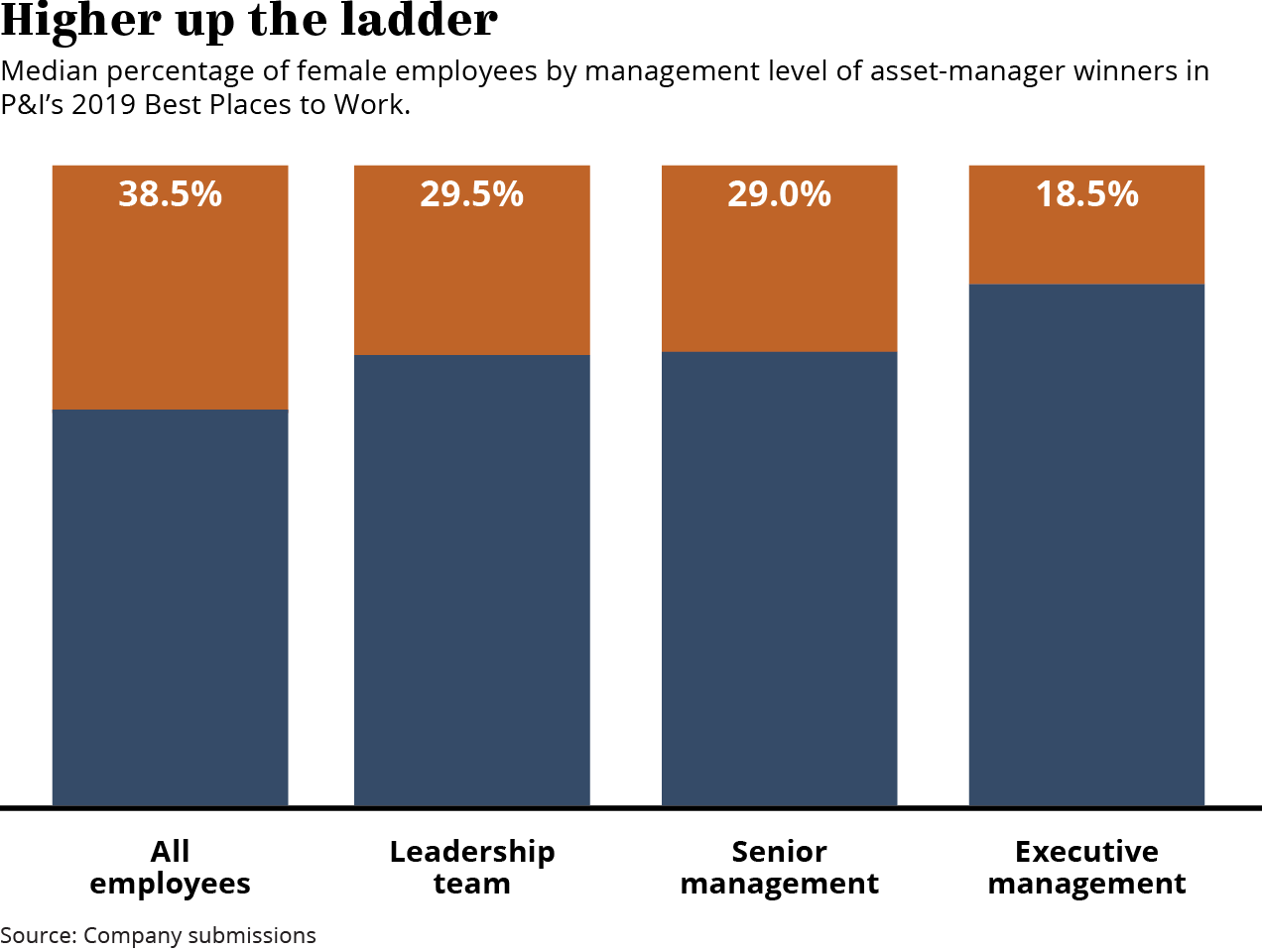 Money managers have also come to realize that gender diversity is not just about bringing women into any senior role, but ensuring they are working across a variety of functions.

What is also important is "the nature and caliber of the roles," Mr. Thomas said. While it's important to have women in "functional" roles, "we were focused on development opportunities where (women held) major (profit and loss) responsibilities. The head of our entire EMEA practice is a woman," referring to Marie E. Dzanis, appointed in July 2018; and the firm's head of product management, Sheri B. Hawkins, appointed in 2016.

"The nature of the role — not just promotional titles, but the quality and caliber — matters," Mr. Thomas said.

The McKinsey study supports this view: The highest-performing companies for profitability and diversity had more women in revenue-generating roles than in "staff" or functional roles on their executive teams.

The caliber and quality of a role is an important focus for Amundi Pioneer, said Lisa Jones, head of the Americas, president and CEO of Amundi Pioneer Asset Management USA Inc. in Boston.

"We're trying to better educate our employees on all aspects of diversity," she said, highlighting senior management's focus on "unconscious bias training programs."

"I look across the organization as an asset management group, and I'm proud of the diversity at key leadership positions," including Christine Todd, senior managing director, who was appointed head of U.S. fixed income last year; Joslyn Suriel, the co-head of IT, Americas; and Nancy Folan, chief human resources officer, Americas.

"In the U.S. organization that I oversee, about 40% of executives are women. And on my management committee about 40% are women. That's up over the last couple of years," Ms. Jones said.

Amundi Pioneer's independent mutual fund board of trustees is also made up of nine people — four of whom are female. Amundi Pioneer had $78 billion in assets under management as of Dec. 31, and Amundi had €1.53 trillion ($1.69 trillion) as of March 31. 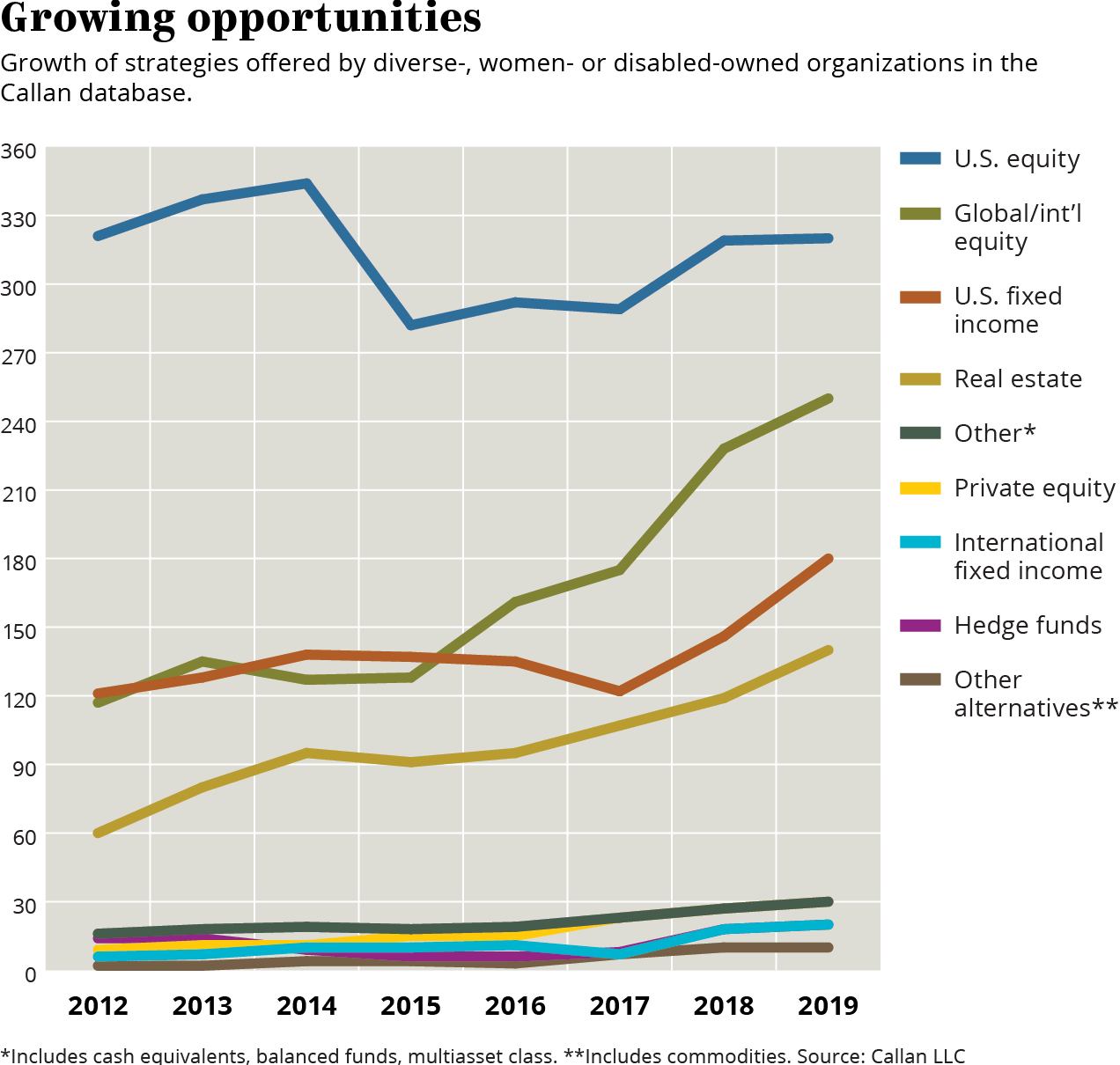 Nuveen LLC focuses on supporting women at different stages in their career. "I've got to a point where, after 25 years in the investing industry, I'm thinking about how can I give back and move women ahead," said Saira Malik, head of global equities in San Francisco for the $1 trillion money manager. In March, Ms. Malik was appointed co-head of LEAD — Leadership, Education, Advocacy and Development — a Nuveen-established industry organization promoting gender equality in money management.

Some 24% of portfolio managers are women, while 27% of the executive committee and 40% of the leadership team at Nuveen are female.

Among the highest-level titles at the firm, such as senior vice president and senior managing director, 22% are women.

Encouraging women into the industry and mentoring are personal to Ms. Malik. "My mentor was a woman," she said and they still talk now — even though she retired 12 years ago.

Another personal reason for encouraging gender equality relates to Ms. Malik's grandmother, who was one of the first women allowed into medical school in India. "I have her diploma in my house. It's from the 1930s, and they didn't have diplomas for women," she said. To make the diploma applicable to her grandmother, the medical school crossed out all references to 'him' and wrote by hand 'her' instead. "Women in my family are inspiring and I hope to not only serve as that role model for my daughters, but also for the company," Ms. Malik said. Nuveen partners with colleges to "make sure we have the conversation" about a career in money management early on with students.

PGIM Inc., the $1.3 trillion global money management business of Prudential Financial Inc., is working to improve confidence among its female and other employees that promotions to positions with greater responsibility are possible.

"We feel we need to provide evidence to our young people that they have a shot at becoming our CEO — that comes in the shape of promoting people from different backgrounds, (and) genders," said Kathryn Sayko, New York-based chief inclusion and diversity officer. It's also about PGIM's visibility in the market, "whether it's interviews or speaking engagements, that we are showing men and women; those with more and less experience; and of all and varied backgrounds."

In January, the firm launched a new media training program, a monthly session that aims "to train midlevel and senior women to be comfortable speaking to the press, presenting at conferences ... because there often is reticence by some of our women to take that prominent role and be visible," Ms. Sayko said.

There's also an emphasis on measuring and monitoring diversity efforts because there can be "good intentions ... but we believe pretty strongly that without data and accountability we are not going to change behaviors — this stuff is hard work and we are all really busy," she said. "But this is just like the investment process — what we all learned in portfolio management 101: Diversification drives better outcomes, but if we don't track it and we aren't really mindful and transparent about our diversity data, I think we risk a real backslide," Ms. Sayko added.

The firm has an aspirational goal to increase global diverse representation at the most senior levels in the firm by 5% by 2023 — known internally as "5 over 5." These roles include vice president and above in terms of title, accounting for 30% of overall employees.

The global goal is to have 44% diverse representation at these senior levels by 2023.

As of year-end 2019, gender diversity representation internationally for PGIM was 39%.

The firm also has an "inclusion council" made up of CEOs from affiliate businesses and chaired by Ms. Sayko. The idea is to bring accountability to the very top of each of the units, to support efforts throughout the firm and to share lessons learned and experiences.

But going forward, it may be that metrics and measurements are not suitable for achieving gender equality in money management.

"The simplest way people measure (gender diversity) is by statistics — they have an aspirational goal of having X% of woman in their firms," Amundi Pioneer's Ms. Jones said. "While those metrics are important, where I believe they have failed is that unless you develop your culture to be (one) of inclusion, which learns to embrace and celebrate people who bring different ideas to the table, your focus on metrics will always fail."

She said it will be easy to attract women or people of color to businesses, but "you won't keep them. The most important area to focus on is how to put those programs in place to evolve a culture that celebrates inclusion. If they continue to feel like an outsider, they will leave."

Pay gap in U.K. improving a bit, but execs admit more needed
Taking their message to heart, they're looking within as well
Trade organizations focus on paths to improve diversity
Recommended for You