Public funds taking the lead in spectacular boom of ESG

Double- and even triple-digit growth in the amount of U.S. institutional assets in ESG investments shows no sign of slowing down, and public pension funds are leading the way.

The lion's share — $8.6 trillion — is managed on behalf of U.S. institutional investors.

Public pension funds and other publicly pooled portfolios accounted for 54% of the $8.6 trillion, followed by insurance companies at 37%, education-related organizations at 6%, and foundations and labor organizations at 1% each.

Another noticeable jump was the tripling of ESG-related alternative investment assets, which reached $588 billion by the start of 2018. 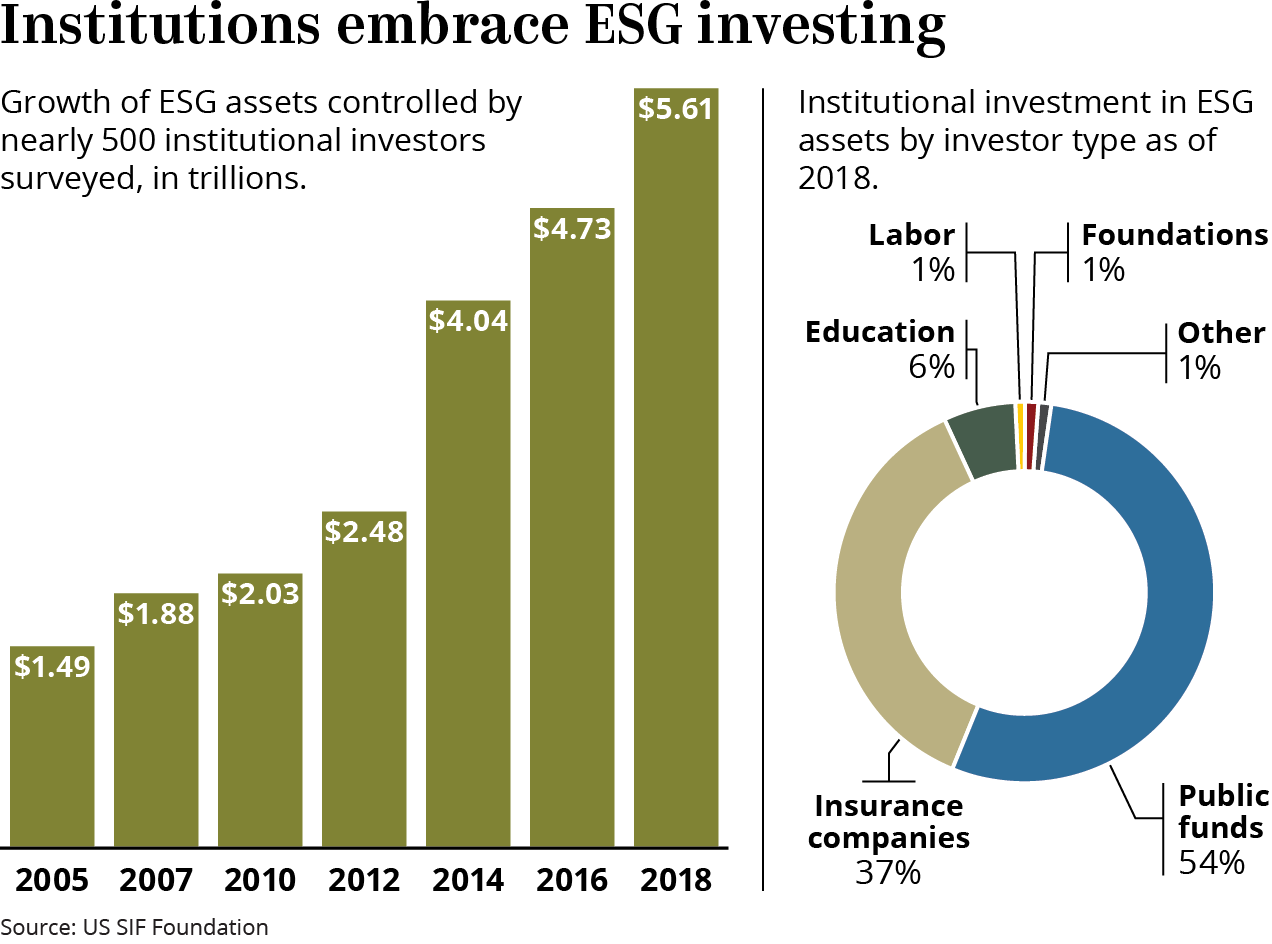 Equally telling is how large public pension funds are rethinking and reworking their approaches to ESG investing. The $236.9 billion California State Teachers' Retirement System, West Sacramento, rebranded its corporate governance unit as sustainable investment and stewardship strategies as a way to imply a more proactive action-oriented program focused on long-term sustainability across the entire portfolio, according to Chief Investment Officer Christopher J. Ailman.

As part of that $6 billion portfolio, CalSTRS in June selected three ESG-focused global equity managers to run a total of $750 million.

Much of the growth in ESG assets is driven by asset managers, who considered environmental, social or governance criteria in their analysis and decison-making for portfolios of $11.6 trillion by 2018, up from $8.1 trillion in 2016, according to U.S. SIF.

"What is tremendously exciting is that all large mainstream asset managers are building out their ESG value proposition to the market. Everyone is staking out their corner," said John Hoeppner, head of U.S. stewardship and sustainable investments at Legal & General Investment Management America Inc. in Chicago.

Emily Kreps, global director of investor initiatives with CDP, a non-profit formerly known as the Carbon Disclosure Project that runs a global disclosure system providing uniform data on environmental issues to investors and the market, sees asset managers as playing an important role in the growth of ESG investing. "They can proactively go out and educate their clients," she said.

Peer pressure also can help. "A lot of the big pension funds have been focused on this area for a long time, but one of the challenges for the smaller pension funds has been the process working with their board and trustees to really make incorporating ESG into their investment process a priority. Investing with an ESG lens is about understanding the environmental risks and opportunities within your portfolio," Ms. Kreps said.

Asset managers and their investors are getting more comfortable with the idea that integrating ESG considerations into investment decisions does not mean sacrificing returns and is an important part of risk management.

"It's a gradual knowledge that ESG considerations will drive better performance. True integration, not just negative screening, will lead to better risk-adjusted outcomes," said Jeff Masom, global head of institutional distribution at RBC Global Asset Management in Boston, which has $349 billion in AUM. The firm considers all assets ESG since it is integrated into all global portfolios.

Instead of sacrificing alpha, "it's actually turning the other way now. We are increasingly hearing that public pension funds are caring about ESG as well, sometimes just because of the belief that the performance will be better," Mr. Masom said.

A 2018 responsible investing survey conducted by RBC and BlueBay Asset Management LLP in partnership with Pensions & Investments found that 90% of institutional investors believe ESG-integrated portfolios are likely to perform as well or better than non-ESG-integrated portfolios. The percentage of respondents seeing it as helping to generate alpha grew to 38%, up from 24% a year earlier.

Another telling number: more than half of respondents who incorporate ESG factors into their investment approach — double the previous year's number — said it was because they consider it part of their fiduciary duty. The RBC/BlueBay/P&I survey also found equities are no longer the primary focus of ESG considerations, with 60% of respondents incorporating the factors into their fixed-income portfolios, 43% into real estate, 36% into infrastructure and 34% in alternative assets.

"It is certainly more standard practice," said Elizabeth Seeger, Washington-based director of sustainable investing at KKR & Co. Inc. "I have seen in the past 10 years a complete change in how the industry is thinking about ESG issues, both asset owners and asset managers."

Ms. Seeger's role was created while she worked at the Environmental Defense Fund managing the partnership between KKR and EDF, and she has seen similar roles created at other investment firms. Her mission is to help integrate ESG issues throughout KKR's investment process and to manage ESG-focused value-creation programs for portfolio companies.

Teresa Cutter, head of ESG and impact for White Oak Global Advisors LLC, a private credit manager in San Francisco that has originated $6 billion in capital for ESG and impact-oriented investments, said that ESG integration is not a marketing strategy, but part of the risk management process, that she sees as becoming "more and more important" to limited partners. They are also looking for diversification, said Ms. Cutter.

"As credit investors, we are looking to avoid risk — headline risk, litigation risk, environmental risk. Credit is one the areas that lends itself well" to ESG considerations, Ms. Cutter said. "We are seeing private investors step up in the U.S. at a rapid pace. Where endowments and foundations used to lead the charge, (public pension plans and corporate investors) are carrying the torch" now, she added.

One clue to the top ESG concerns for investors comes from the U.S. SIF Foundation report, which found that based on the number of ESG-related shareholder proposals filed between 2016 and the beginning of 2018, the top issues were proxy access, corporate political activity and climate change. 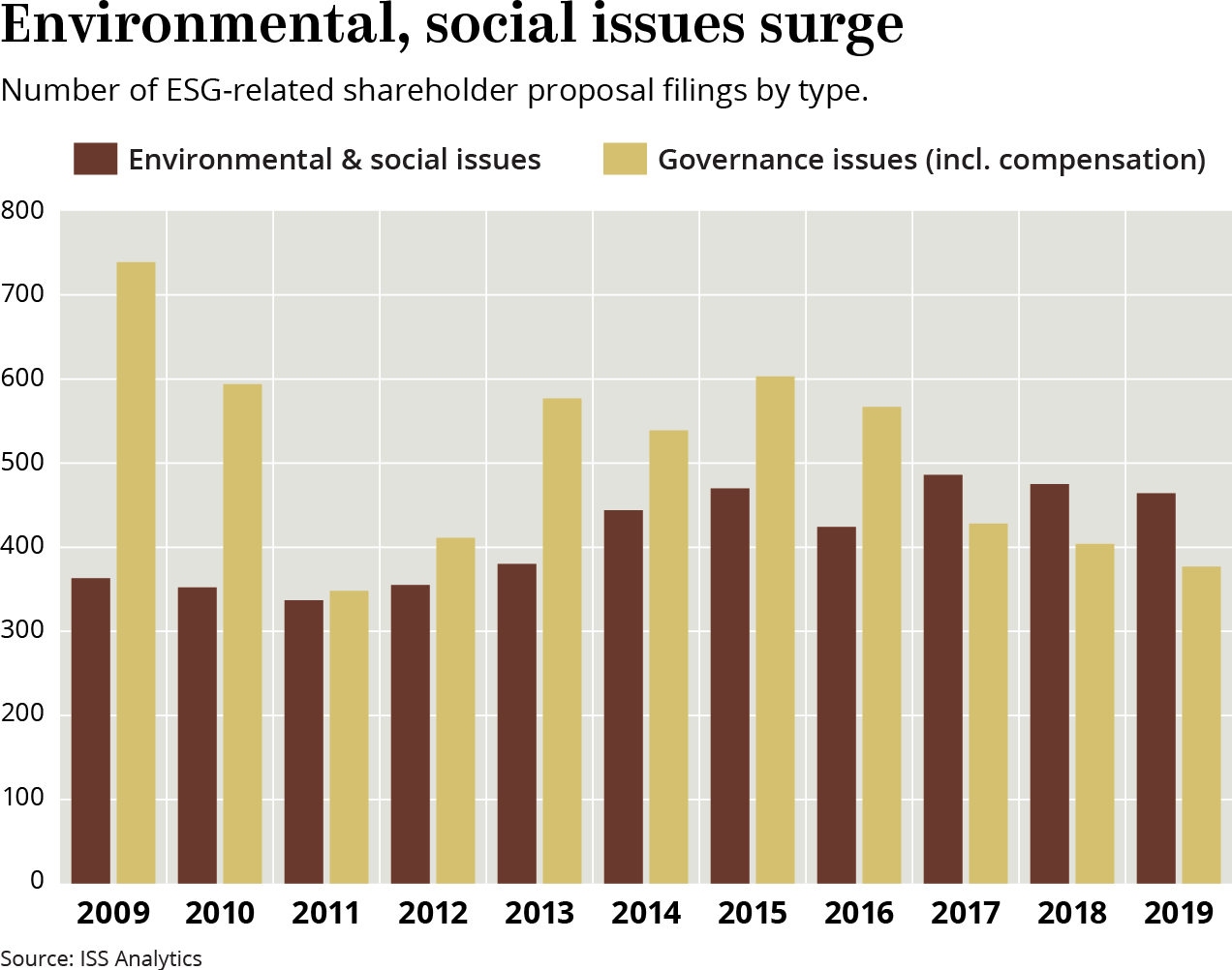 When U.S. SIF looked at data from ISS and the Sustainable Investments Institute on the shareholder proposals filed between 2016 and early 2018, the top environmental issue by far was climate change, with more than 250 proposals compared with less than 100 for sustainability reporting.

"There is definitely increasing focus on climate change and how asset owners are thinking about it in their portfolios. The number of inquiries is definitely on the rise and I do not think that is going away," said Ms. Seeger of KKR.

Beth Richtman, managing investment director of the sustainable investments program for the $376 billion California Public Employees' Retirement System, Sacramento, agreed. "Climate change matters a lot. The entire history of the financial markets has taken place in a time of relative climate stability. As an investor, you need to recalibrate to the new assumptions that a changing climate brings," she said.

"There is a vast canyon of ESG topics and not all of them are going to be as relevant to investors. Also, some topics will only matter to certain investments, whereas others are systemic. ESG topics really can't all be treated equally or as one monolithic factor," said Ms. Richtman.

That goes for how to integrate ESG into portfolios, she said.

"For each of the asset classes we have different strategies. In real assets — large assets that we hold long-term — we have a defined set of ESG considerations that we systematically factor in to underwriting," while in the global equity portfolio, there is more of a focus on company engagement, or if necessary, proxy voting.

From 2016 through the first half of 2018, 165 institutional investors and 54 investment managers controlling $1.8 trillion in assets under management filed or co-filed ESG shareholder resolutions, U.S. SIF found.

That is a decrease from the 225 institutional investors or money managers controlling $2.56 trillion in assets who filed or co-filed ESG shareholder resolutions from 2014 through 2016, a sign that more asset managers are engaging in direct dialogue with companies before, or instead of, filing a proposal. While 61 managers in 2016 said they took that route, by 2018, 88 money managers representing $9.6 trillion did so.

Investors are also getting creative.

CalPERS' Energy Optimization Initiative, which looks for economically attractive energy-related opportunities for its real estate portfolio, "is one of the ways we are working on reducing our risk to climate change, while also making money by seizing attractive investment opportunities within our existing portfolio," Ms. Richtman said.

"Mobilizing for the planet goes hand-in-hand with protecting our pensions," Mr. Stringer said.

Investors sift through tons of data to work at a consistent approach
Active management key in managers' pursuit of ESG goals – survey
Sponsors, participants' views differ on ESG options – study
Recommended for You

Industry sounds off against DOL proposal on ESG