A large drop in the discount rate for the 100 largest U.S. corporate defined benefit plans contributed to an 11.31% increase in liabilities in 2019, Pensions & Investments' annual analysis of Securities and Exchange Commission filings shows.

The discount rate fell 95 basis points to an aggregate average 3.3% among the 100 plans.

Michael Moran, senior pension strategist at Goldman Sachs Asset Management in New York, said the paradox of a high investment return on assets being mostly offset by higher liabilities, driven by falling discount rates, reinforced the importance for many plan sponsors to move their plans forward on a liability-matched fixed-income glidepath in 2019, and he sees the trend toward liability-driven investing continuing through volatile markets and continued low interest rates in early 2020.

Mr. Moran said the market impact of the COVID-19 pandemic "has not been a lot of fun but from our conversations with clients over the past few weeks, in particular corporate pension clients, the word I keep coming back to is 'measured.' These are professional investors. They have an asset allocation and an investment strategy they are comfortable with, and a long-term view."

In looking back on 2019, Mr. Moran said: "What was maybe surprising, to some, is that in a year where funded status, on a year-over-year basis, didn't change that much, in a year where rates fell and credit spreads tightened, a number of plans said, even though that may not be a great investing environment for fixed income, we're going to increase our target allocation to fixed income and continue down that path because that's part of our longer-term derisking strategy. Which, quite honestly, has served them well in 2020."

The LDI structure has been doing what it is designed to do in balancing the liabilities of corporate DB plans against volatile asset prices, as discount rates continued trending down and asset prices fell in early 2020, he said.

"Some plans are in pretty good shape. They moved to an LDI framework several years ago and they're very well hedged so as interest rates fell, it didn't impact them that much," he said. 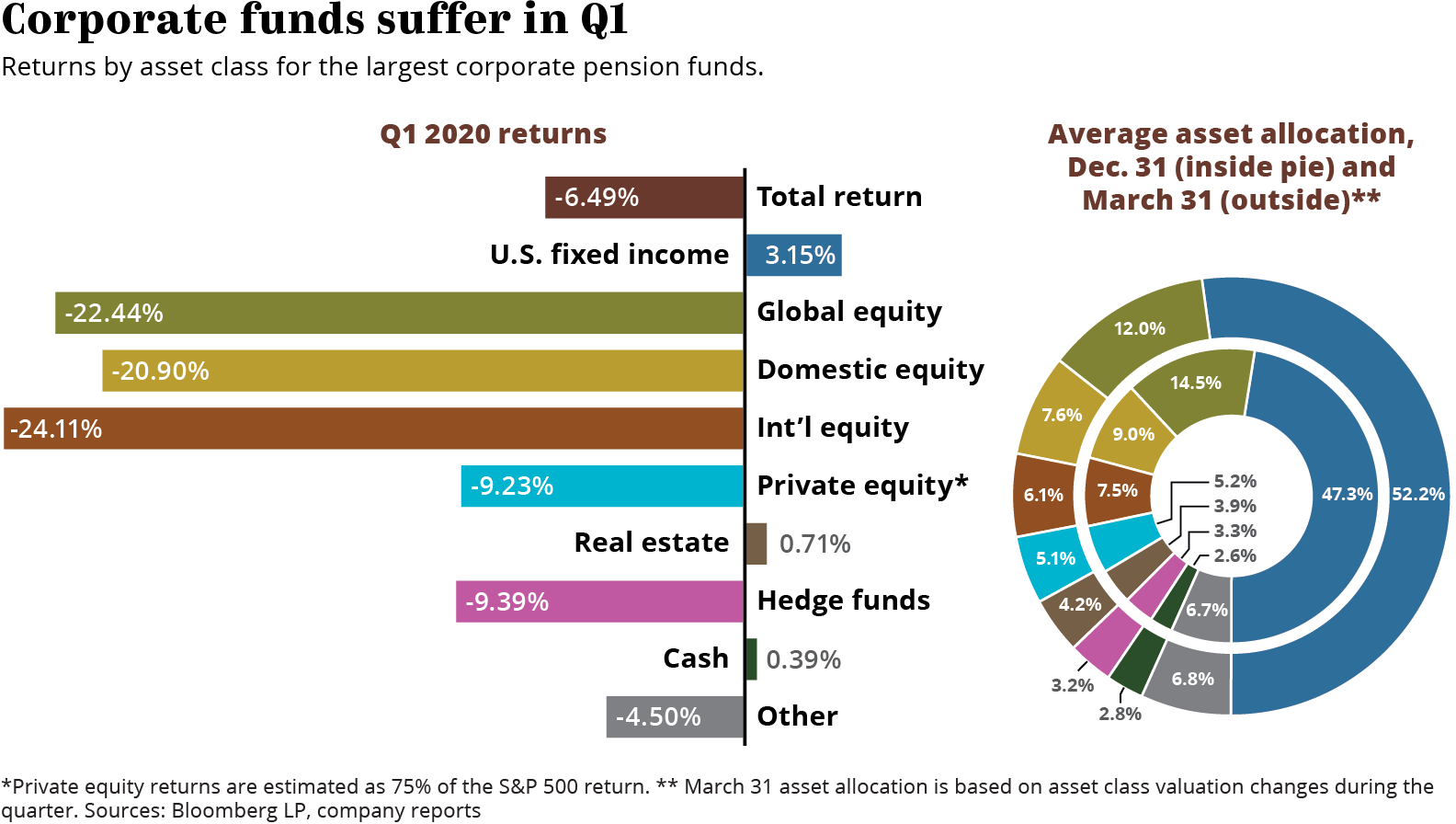 For plans that have not moved as far down their glidepaths, Mr. Moran said there is still a lot of time before calendar-year companies will report the results of 2020.

"No one has a crystal ball. If things bounce back later in the year, then a lot of this just becomes intrayear volatility. We have a long way to go," Mr. Moran said.

In data released April 27, corporate DB plans in the Northern Trust universe had a median return of only 2.5% for the year ended March 31 after an 18.2% return for the 2019 calendar year. Corporate plans saw a median -8.1% return in the first quarter.

The early months of 2020 had varying effects on plans, depending on their funded position and asset allocation​​​​, said Royce Kosoff, managing director of retirement at Willis Towers Watson PLC in Philadelphia.

"I think one of the big stories in the first quarter is the wide range of outcomes depending on the asset allocation difference across sponsors. In a lot of years, the range of outcomes has been tighter than what we've seen in just the first quarter. We've seen ranges as high as 10 to 15 percentage points of funded status difference depending on whether you're really far along that glidepath and are mostly derisked vs. those that are in the beginning steps of their glidepath, maybe because the funded status isn't as strong and they haven't been able to take those steps. I think the headline, or the main idea here, is the variation in outcomes and how that's affecting plan sponsors in very, very different ways," Mr. Kosoff said.

Long-duration U.S. government bonds, typically used in LDI strategies, outperformed in the first quarter of 2020, while corporate bonds and equities had negative returns.

Loaded up on bonds

The fixed-income allocation of Conagra Brands Inc., Chicago, had the largest increase on P&I's list, rising to 85% in 2019 from 58% one year earlier. After freezing benefit accruals effective January 2018, Conagra adopted a target allocation "of approximately 90% in fixed-income securities and approximately 10% in return seeking assets," according to the company's 10-K filing. Corporate bond holdings increased to $2.26 billion from $4.7 million and government bonds dropped to $748.3 million in 2019 from $1.85 billion a year earlier. Conagra had $3.6 billion in assets, liabilities of $3.73 billion, and a funding ratio of 96.5% as of May 26, 2019.

Seattle-based Weyerhaeuser Co.'s allocation to alternatives had the largest decrease in 2019, falling 18.5 percentage points to 40.1% as of Dec. 31. The hedge fund holdings dropped to $531 million from $1.8 billion a year earlier and private equity investments fell slightly to $1.03 billion from $1.08 billion in 2018. Weyerhauser's funding ratio slid to 87.3% in 2019 from 93.7%. Assets fell to $3.72 billion from $4.93 billion and liabilities dropped to $4.26 billion from $5.26 billion following the January 2019 purchase of a group annuity contract that transferred approximately $1.5 billion of U.S. qualified plan obligations.

Tom Meyers, executive director and head of Americas client solutions at Aviva Investors Americas LLC in Chicago, said the early months of 2020 have led to some discussions with clients about rebalancing.

"Typically, they have experienced a dislocation that has taken their asset allocation out of balance. For instance, they might have less equities than planned, just through the decrease in equity prices, and actually what happens is they rebalance back to target," Mr. Meyers said. "So clients at the height of the volatility were worried about their ability to access liquidity and effect the rebalancing that they typically would do. 'Do I rebalance? How much would it cost for me to rebalance?' Those things were on clients' minds."

"Another thing clients have been talking about to us, given the dislocation in credit spreads, is this an opportunity perhaps to do a greater amount of investing in LDI strategies. What you might expect in a reversal of this magnitude, of 10 full percentage points of funded status in the first quarter of this year, you would think, potentially, that pension plans would be investing less in LDI strategies because they've gone backward on the path to being fully funded. But we've observed more, not less, inquiries in LDI strategies and I think that's because people are viewing corporate bond yields as particularly attractive post the widening of spreads and decline in corporate bond prices that occurred at the first part of this COVID crisis," Mr. Meyers said.

Employer contributions fell almost 50% in 2019, to $26 billion from $51.2 billion, and the Coronavirus Aid, Relief and Economic Security Act, signed by President Donald Trump on March 27, could continue the trend of lower contributions into 2020. The CARES Act allows employers to defer minimum required 2020 contributions until Jan. 1, 2021.

Pittsburgh-based Alcoa Corp.'s minimum required contribution to its U.S. plans was $250 million in 2020, according to the company's 10-K filing on Feb. 21, but an 8-K filed on April 22 said Alcoa will defer its U.S. pension contribution in response to "economic uncertainty caused by the pandemic." Alcoa contributed $175 million in 2019 and ended the year with $5.02 billion assets, $6.53 billion in liabilities and a 76.8% funding ratio.

Despite having no minimum funding requirement in 2020, Delta Air Lines Inc., Atlanta, announced a voluntary $500 million contribution in its 10-K filing on Feb. 13. An April 22 10-Q filing indicated that decision was reversed due to "the impact of the COVID-19 pandemic on our liquidity."