The pension risk transfer market is poised for a potential record year as U.S. corporations take advantage of improved funding to pull the trigger on transferring their defined benefit plan liabilities to insurers.

HP Inc. and Lockheed Martin Corp. are two such corporations that have recently announced $5 billion transactions as the market gains steam during its traditionally busiest time of year.

Industry experts cited strong equity markets as a significant driver for the increased activity. The closer a plan is to being fully funded, the more cost-efficient a buyout transaction is since premiums are dependent on the ratio of assets to liabilities.

According to Mercer, the monthly estimated aggregate funding ratio of defined benefit plans sponsored by S&P 1500 companies totaled 95% as of Aug. 31.

The first half of 2021 saw a greater dollar volume despite fewer transactions, according to a midyear report from Aon. There were 128 buyout deals totaling $8.7 billion during the first six months of 2021, compared with 153 deals totaling $7.7 billion a year earlier.

This year's dollar total was higher primarily due to one large transaction. In March, J.C. Penney Corp. Inc. purchased a group annuity contract from Athene Holding Ltd. to transfer about $2.8 billion in pension liabilities, completing the termination of its U.S. defined benefit plan.

Matt McDaniel, Philadelphia-based U.S. leader of Mercer's financial strategy group, said in a phone interview that buyout activity began accelerating in the fourth quarter of 2020 after a pause in the second quarter as some plan sponsors shifted their attention to addressing the economic effects of the COVID-19 pandemic. 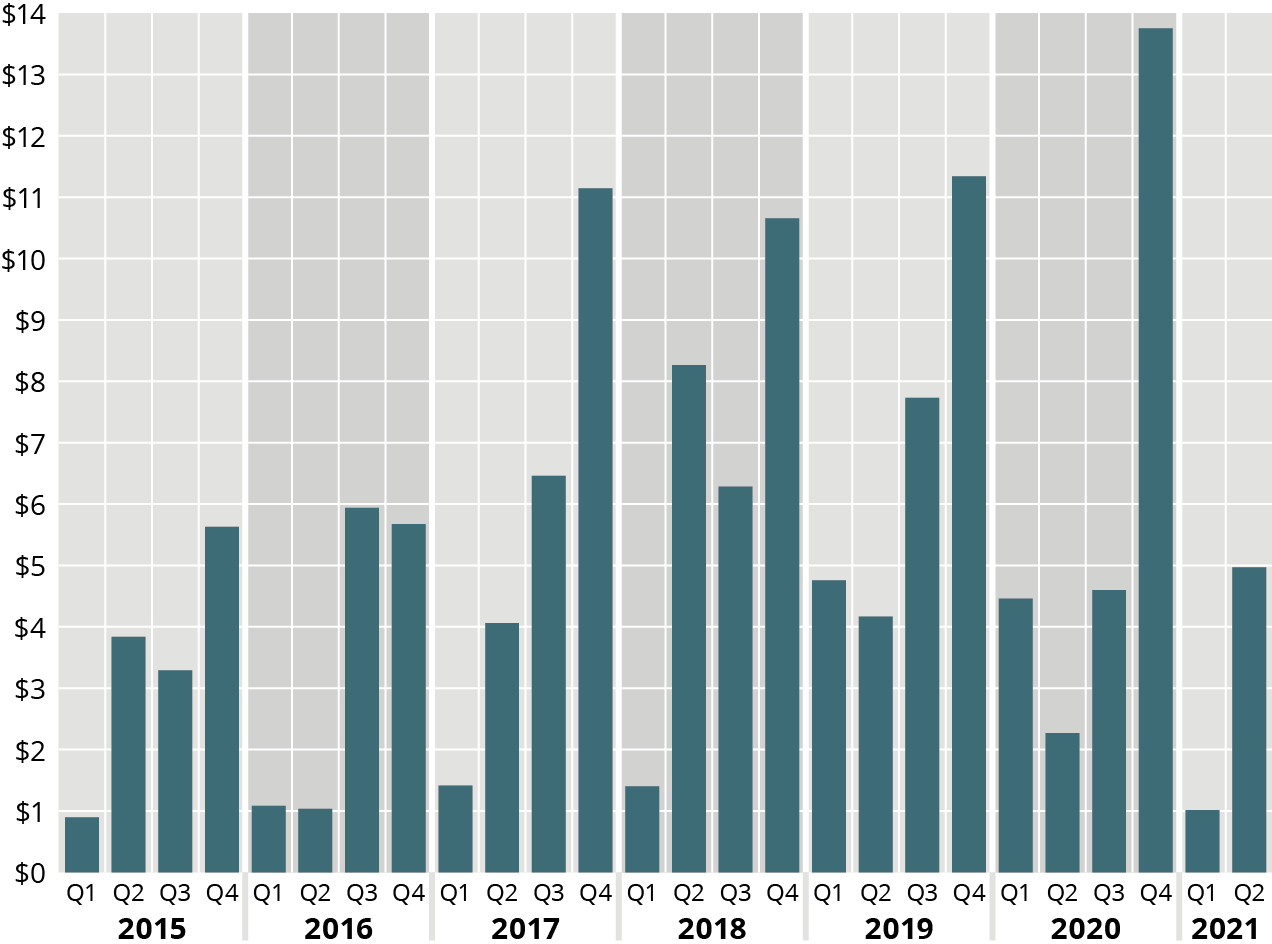 "The increase in the funded status that has come from strong equity markets has improved plan sponsor's abilities to pursue these goals," Mr. McDaniel said. "Clearly a lot of the drivers that we've seen grow this market for the past 10 years are still in play."

"In September, we've been incredibly busy," said Beth Ashmore, a St. Louis-based senior retirement consultant at Willis Towers Watson PLC. "You've seen much more announcing in the third quarter than you've probably seen (in the past). We anticipate that's probably going to continue, (with high) deal volume going into the first few weeks of the fourth quarter."

Two significant transactions have already been announced in the past month, the largest since 2018.

That liftout transaction, due to close by Oct. 31, will transfer the benefit-paying responsibility for about 41,000 retirees and beneficiaries in the HP Inc. Pension Plan, which had $10.9 billion in assets as of Oct. 31, 2020, according to its most recent Form 5500 filing. The population consists of the vast majority of plan participants who began receiving benefits prior to Nov. 1, an HP spokeswoman said.

The transfer affected about 18,000 retirees and beneficiaries in two pension plans. Lockheed Martin spokesman Trent J. Perrotto said in an email the population was "selected based on a number of factors, including the size of their monthly benefits and the start date of their payments."

It was the latest in a series of buyouts, most recently in December when the firm transferred $1.4 billion in liabilities via an annuity contract with MetLife subsidiary Metropolitan Tower Life Insurance Co.

"When plan sponsors go along the derisking journey, the final step is to terminate the plan, and that can be a 12- to 18-month process with regulatory filings," Mr. Palms said. "Last year, we benefited from those continuing, but what we didn't see (were) more initiations of plan terminations, so when you look at the business this year, it's going to be much more dominated by retiree liftouts."

Among those liftouts, the majority of transactions — like those of Lockheed Martin — target a specific set of retirees receiving below a certain threshold of monthly benefits, which represents a significant percentage of the overall participants.

The number of participants in a plan directly affects the fixed Pension Benefit Guaranty Corp. premium rate, which is measured per participant. It has steadily grown to $86 per participant in 2021 from $83 in 2020 and $80 in 2019.

"We've got a number of those that we're in the midst of implementing through the rest of the year," he said.

The desire to lower PBGC premiums by removing participants from the balance sheet also accounts for the lack of buy-in transactions in the U.S., but Lockheed Martin gained attention in December 2018 when it purchased an $810 million group annuity contract from Athene Annuity and Life Co., which reimburses Lockheed Martin for benefit payments the plan makes to its retirees and beneficiaries.

While Lockheed Martin is not terminating its plan, more corporations are investigating a buy-in transaction as a way to lock in costs on full plan terminations, experts say.

Because the plan termination process takes up to 18 months, locking in rates in advance can help remove the volatility from interest-rate fluctuations and equity markets.

"If I'm off by 1%, you're now at $1.01 billion (in liabilities), but that means my $50 million contribution goes to $60 million. My 1% difference in price estimate becomes a 20% difference in budgeted cash," Mr. Jacobs said. "The reason why these buy-ins have become and will become more popular is it eliminates that risk you've been sitting with so long."

HP and Lockeed Martin weren't the only significant transactions so far this year. Others include: