Among the 24 managers that reported third-quarter earnings by Nov. 5, 17 experienced gains in total assets under management compared with 25 of 26 managers in the prior quarter.

"The third quarter was a capital markets story. Given the lack of organic growth for many firms, market returns are important to maintain assets under management. Managers get battered around during turbulent markets," said Tyler Cloherty, senior manager and head of the knowledge center for Casey Quirk, a practice of Deloitte Consulting LLP.

"The third quarter was fairly benign for publicly traded managers. The actual impact of quarter-over-quarter changes was small, resulting in a relatively unspectacular period for managers," said Mr. Cloherty, who is based in Darien, Conn.

Market returns did not come to the rescue of some managers with enough to buoy their AUM; the S&P 500 index was up 1.19% over the quarter, the Bloomberg Barclays Aggregate Bond index rose 2.27% and the MSCI All-Country World index fell 0.53%.

Victory Capital Management's AUM rose 127.6% to $145.8 billion in the quarter ended Sept. 30, primarily due to reporting for the first time the approximately $83.1 billion it gained through the acquisition of USAA Asset Management Co. on July 1.

David Brown, the firm's chairman and CEO, said in the firm's Nov. 4 earnings release that partially due to the USAA acquisition, Victory Capital's "revenue and adjusted net income more than doubled sequentially, and adjusted EBITDA margin expanded to a record 44.8%."

Based on organic growth and investment returns, Goldman Sachs Group Inc., New York, experienced the largest increase in AUM in the third quarter, up 6.1% to $1.76 trillion and a 13.7% increase compared to a year earlier.

Goldman Sachs' net inflows in the third quarter were topped by the $84.2 billion in net inflows for New York-based BlackRock Inc., which increased the firm's AUM 1.8% in the quarter and 8.1% for the year ended Sept. 30 to $6.96 trillion. BlackRock's net flows totaled $125.4 billion in the prior quarter.

Among the 24 publicly traded managers tracked by P&I, Boston-based BrightSphere Investment Group Inc. saw the largest decline in AUM in the third quarter, down 3.6% to $216.8 billion and down 8.8% from Sept. 30, 2018.

Brett Perryman, BrightSphere's head of corporate communications, clarified in an email that "a BrightSphere affiliate had a subadvisory relationship with USAA (Asset Management). As part of its acquisition of USAA funds … Victory Capital Holdings moved management of USAA funds to its in-house managers. The decision was not related to performance."

Casey Quirk's Mr. Cloherty singled out alternative asset managers as one pocket of the investment management industry that continues to steadily attract assets under management regardless of market conditions.

"Alternative managers have been beneficiaries of asset owners rebalancing their portfolios into illiquid strategies," Mr. Cloherty said, adding that the intensity of fee pressure exerted on traditional managers by investors is generally not being applied to the same extent for private equity, real estate, private credit and other non-traditional managers. 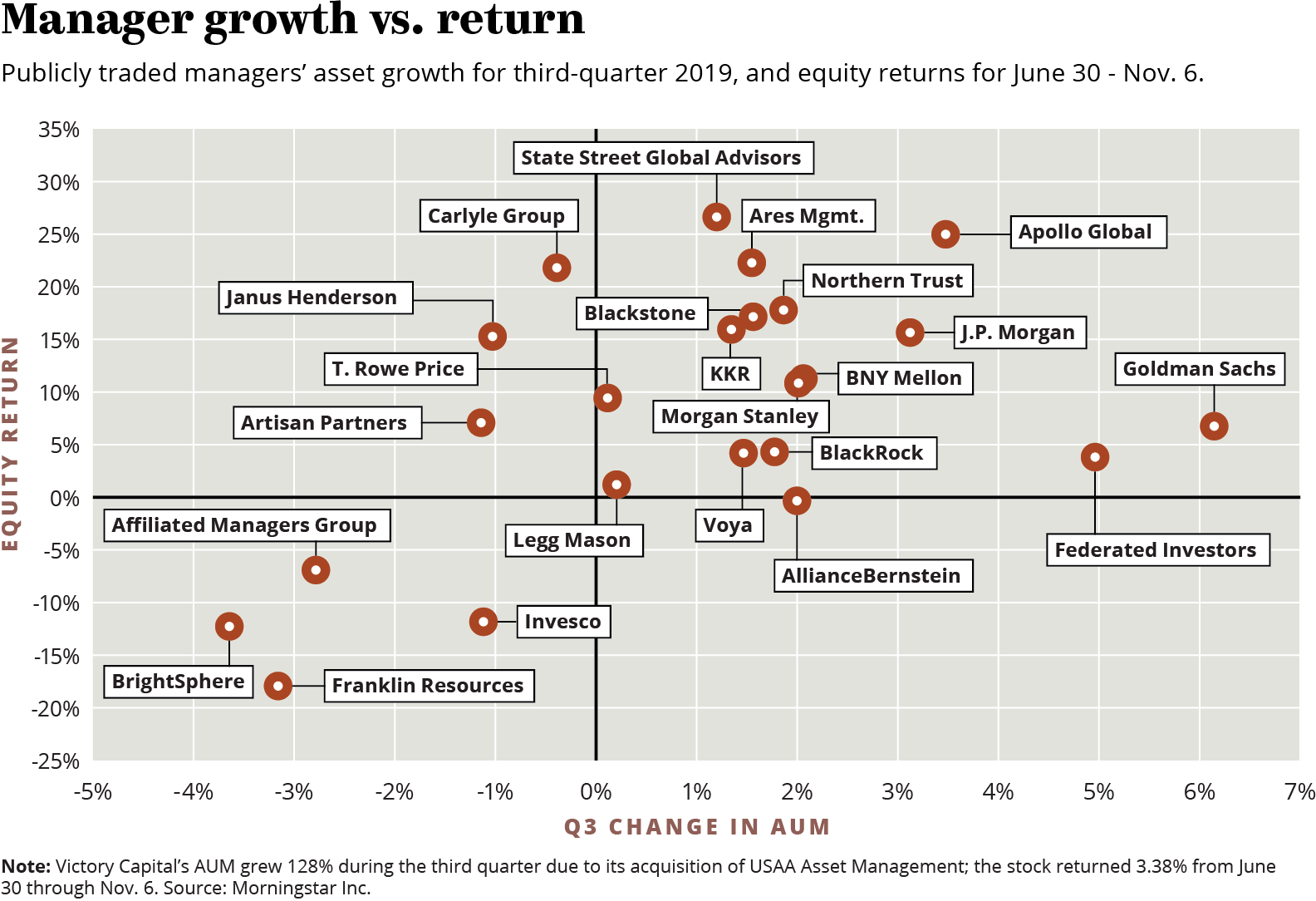 Four of the five publicly traded alternative investment firms tracked by P&I experienced positive AUM growth in both the quarter and the year ended Sept. 30:

More traditional money managers also struggled to keep their revenue up in the third quarter than in the previous quarter.

Of the 19 traditional managers in P&I's universe of publicly traded firms, 12 produced revenue increases in the third quarter, six saw revenue decline from the prior quarter and one firm's revenue was flat. In the second quarter, 17 asset managers had positive revenue growth, revenue declined for one firm and one manager's revenue was flat compared to the previous three-month period.

In the institutional investor marketplace, Mr. Powers said increasing intermediation in manager selection by consultants and outsourced CIO providers is putting even more pressure on managers.

Invesco Ltd., Atlanta, like Victory Capital, also profited from an acquisition, namely of OppenheimerFunds in May 2019.

In its Oct. 23 earnings release, Invesco attributed increases in operating revenue of 19.5% in the third quarter and 28.2% in the year ended Sept. 30 to $1.7 billion to higher average AUM primarily due to the acquisition of OppenheimerFunds, which increased the firm's AUM by about $250 billion.

Long/short strategies are no longer working