BlackRock Inc., the world's largest money manager, is nearing the extraordinary milestone of $10 trillion in assets under management, a figure boosted by an extended bull market run and a rapid increase in its massive exchange-traded fund business.

BlackRock reported $9.46 trillion in AUM as of Sept. 30. According to an estimate by Pensions & Investments based on market returns and averaging recent inflows, BlackRock's AUM is around $9.9 trillion as of mid-November. And if those trends hold, BlackRock could cross the $10 trillion mark before the end of the year, according to P&I estimates.

BlackRock declined to comment on these estimates or its current AUM.

To put that number in perspective, consider that only two countries — the U.S. and China — boast higher GDP than $10 trillion as of 2020, according to World Bank data.

Vanguard Group is the next closest manager with $8 trillion as of Sept. 30, followed by Fidelity Investments at $4.2 trillion. 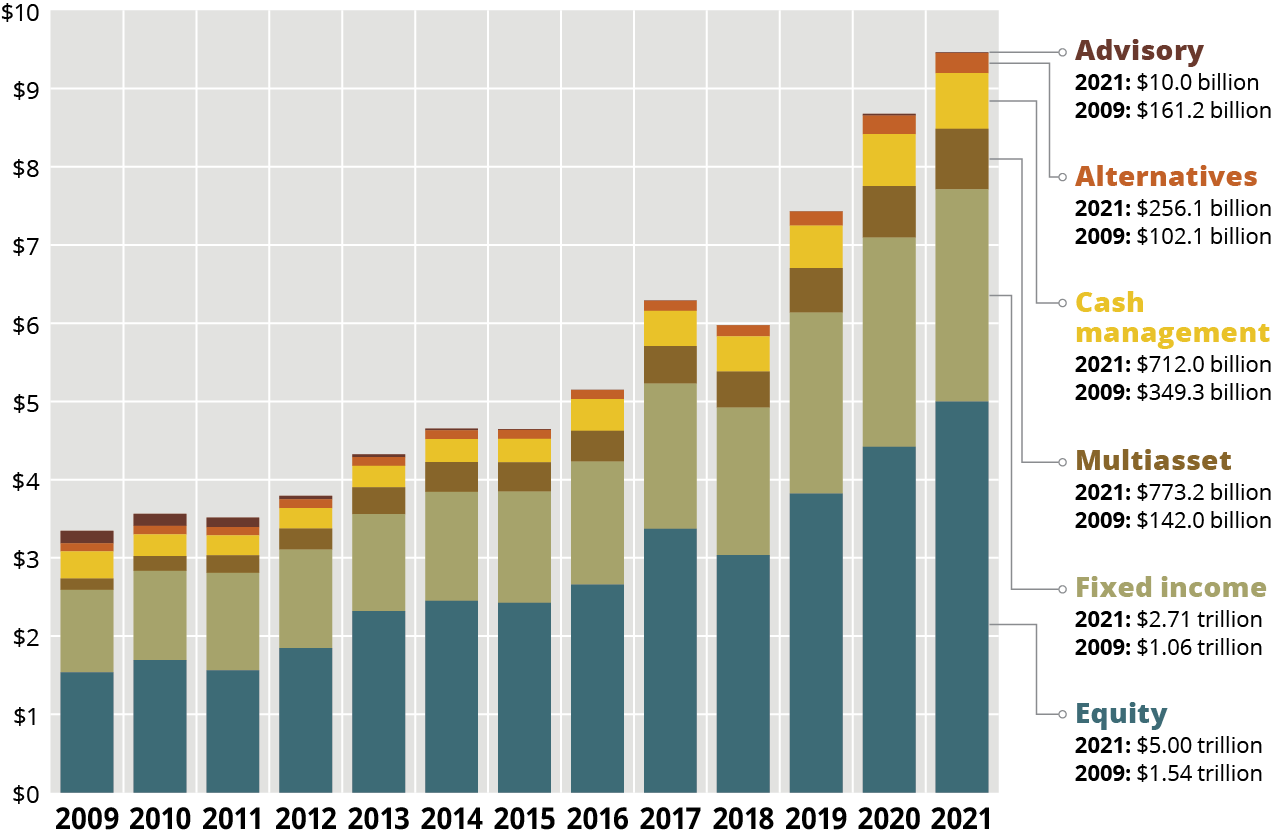 Christopher Ailman, chief investment officer of the $312.9 billion California State Teachers' Retirement System, West Sacramento, said in an email that the compound growth of all asset managers is relative to the capital markets, so in many ways, the sheer size of index managers is inevitable.

"We look at them relative to the competition," he added. "The size brings complexity and weight, but the key is great management and compliance and risk systems."

Mr. Ailman further stated that without question, BlackRock has "demonstrated an ability to use their scale to a strong competitive advantage. We invest with BlackRock because they are leaders in many of their respective products."CalSTRS has about $1 billion invested in two BlackRock low-carbon transition readiness ETFs and another $775 million in alternatives with the firm.

Neal Epstein, vice president-senior credit officer and the lead analyst on BlackRock at Moody's Investors Services Inc. in New York, said BlackRock has proven itself capable of delivering a wide array of products that benefit investors.

The $10 trillion figure is a rather "arbitrary" number and is actually dwarfed by the size of the investing universe, Mr. Epstein said.

Mr. Epstein also said he doesn't think concentration risk is an issue, considering that two-thirds of BlackRock's assets are passive, and therefore "reflect no greater risk than the markets in which it invests, and that fund investors, not BlackRock, hold that risk."

Dimitri Kyser, a spokesman for the Indiana Public Retirement System, Indianapolis, said in an email that INPRS has been a client of BlackRock for about 20 years. "INPRS has historically entrusted the management of assets to BlackRock due to the firm's breadth of investment capabilities, robust operations, and alignment of interests," Mr Kyser said. "As (BlackRock) continues to grow in size, it must continue to exercise responsibility consistent with the firm's fiduciary obligation to manage INPRS's assets in the sole and exclusive interest of INPRS' members and beneficiaries. As such, INPRS will continue to insist on rigorous analysis, grounded in evidence, when it comes to BlackRock's proxy voting practices and policies."

Mr. Kyser added that as of Sept. 30, INPRS had about $4.6 billion in assets invested with BlackRock, across both its defined benefit and defined contribution plans, which have $46.7 billion in total assets.

Bloomberg
On an upward swing

BlackRock began as a fixed-income institutional manager in 1988 and steadily acquired assets until it landed its biggest prize, the iShares ETF business of Barclays Global Investors in December 2009 — a deal that doubled its assets to $3.29 trillion from $1.49 trillion. Since that transaction, BlackRock has reigned as the world's largest asset manager.

But during an investor presentation in June, BlackRock noted that its revenue accounts for only a 3% share of the global asset management industry as of 2020 — and that the top five asset managers had an 11% share of total global revenues, a figure smaller than what the top firms in such sectors as cloud computing and sales and trading control, according to Bloomberg.

But that has not stopped voices such as Sen. Elizabeth Warren, D.-Mass., who has called for stricter government regulation of the asset manager as a systemically important financial institution.

Since the end of 2009 after the BGI acquisition, the equity portion of BlackRock's portfolio has soared by 225% while the fixed-income segment has jumped by 157%. However, multiasset strategies have surged by 444% over that period, making it the fastest-growing product type.

By client type, institutional assets dominate, but BlackRock's ETF business has outpaced growth in its retail and institutional segments by a wide margin. Between the end of 2012 and the end of the third quarter of 2021, ETF assets at BlackRock have quadrupled to $3.04 trillion; while institutional assets have about doubled to $4.7 trillion and retail assets climbed by 148% to $1 trillion over that period.
Changes in market value have played the most dominant role in pushing up BlackRock's overall AUM. Since the end of 2009 through Sept. 30, 2021 — a period that saw BlackRock's AUM expand by more than $6 trillion — market growth accounted for 65% ($3.98 trillion) of that increase, according to Pensions & Investments' calculations based on SEC filings.

Benjamin Phillips, head of asset management global advisory services at Broadridge Financial Solutions, a corporate services and financial technology company based in Lake Success, N.Y., said by email that BlackRock's AUM growth reflects the "evolution of the asset management industry over the past quarter century — fueled by shifts into multiasset, passive investing, globalization, private markets, sustainability and most recently technology and a growing focus on the individual investor — and all encouraged by mergers and acquisitions."

Cathy Seifert, senior equity analyst at CFRA Research in New York, said that while $10 trillion is "just a number, it's a very big number" that highlights the need for scale in the marketplace in a climate where fee revenues are facing downward pressure.

John Coyne, chairman of asset manager Spouting Rock Asset Management, Bryn Mawr, Pa., with $3.5 billion in AUM, noted that BlackRock CEO Laurence D. Fink understands the parameters of risk and return better than any executive in the industry. Mr. Coyne said iShares "allowed BlackRock to hit from both sides of the plate, active and passive, and therefore, able to focus on raising assets."

"Unlike some other money managers, BlackRock has consistently generated strong organic growth," she said. "And given their strong internal culture, I think they will maintain this capability and keep expanding."