Vanguard is edging closer to BlackRock in institutional

Ten years of relentless asset gathering later, mostly in low-fee fund offerings, Vanguard has rapidly closed the gap,  with $5.41 trillion in assets under management as of Dec. 31.

Vanguard’s pace to catch BlackRock has been blistering. Vanguard’s worldwide institutional AUM grew 13.6% in the year ended Dec. 31 and 126% for the five-year period, according to Pensions & Investments’ annual money manager survey.

In contrast, BlackRock saw its worldwide institutional AUM rise 10.6% for the year to $5.69 trillion, up 73% over the past five years. BlackRock also trailed Vanguard’s growth in several of the firms’ largest areas in U.S. institutional tax-exempt investing, but the firm has recorded huge growth in its retail channels. 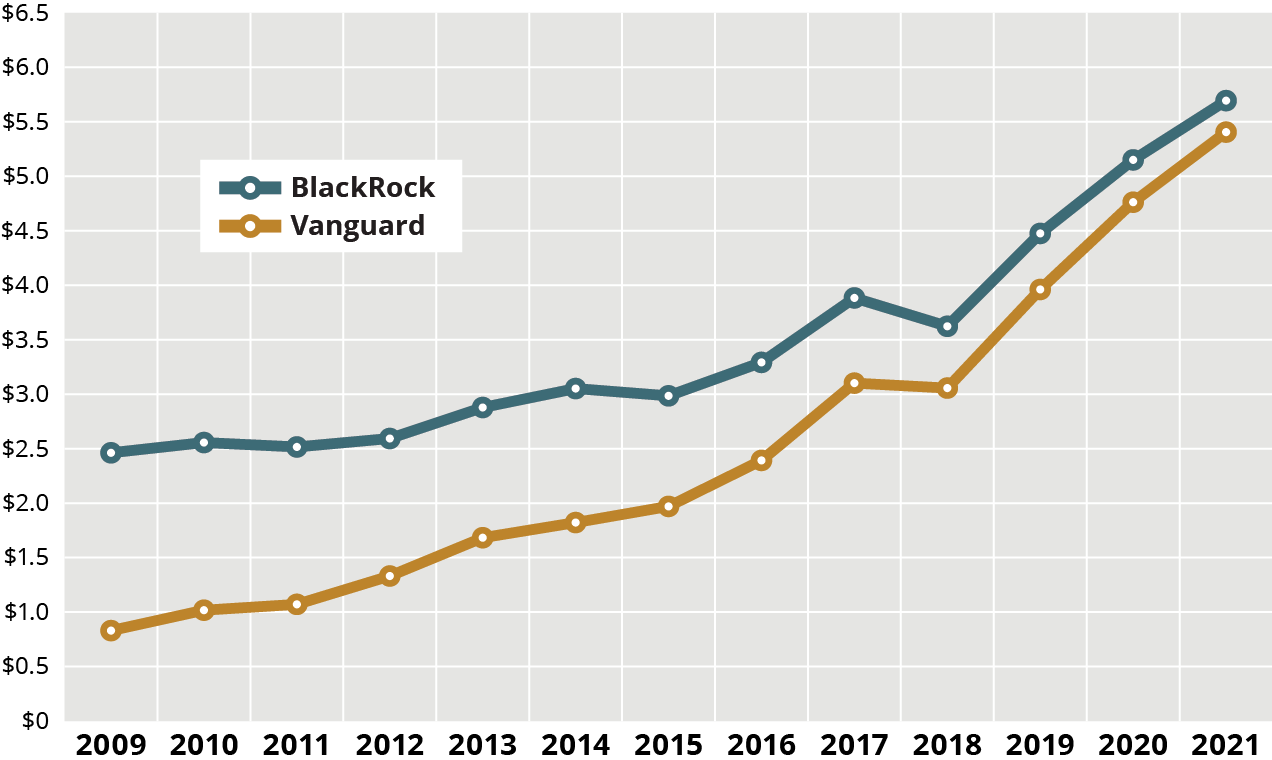 Source: Pensions & Investments; data are as of Dec. 31.

“In the money management industry, only one firm — now BlackRock — can be the largest and only one can be the cheapest — now Vanguard,” said Amanda Tepper, founder and CEO of money manager consultant Chestnut Advisory Group LLC, Westport, Conn., in an interview.

The success of both managers in comparison to their rivals is “the way they position themselves as valued partners with clients and how each firm built their businesses specifically to do everything they can help clients. Part of the success for each firm is the way they provide solutions to investors’ as opposed to thrusting funds at them. It helps that both firms also have excellent customer service,” Ms. Tepper said.

Both firms also benefit from cross-selling new strategies to existing investors, Ms. Tepper said, noting “once an investor has an investment relationship with BlackRock or Vanguard, it’s easier to sell them something else.”

BlackRock attracted $540 billion of net inflows in 2021, the strongest annual organic growth in its history, said Zach Buchwald, managing director and head of institutional business for the U.S. and Canada, in an interview.

He added that BlackRock saw a fair amount of outflows in 2021 from indexed strategies as institutional investors systematically shifted money into the firm’s active strategies in reaction to market conditions.

Last June, the Federal Retirement Thrift Investment Board, Washington, hired State Street Global Advisors as an additional manager for three index funds and transferred about $57 billion in assets to the Boston-based firm from the $739.9 billion Thrift Savings Plan.

BlackRock had been the sole manager of the three TSP index funds.

Passive investing has long made up a big portion of each manager’s business, but Vanguard has been the dominant force the past five years for U.S. institutional tax-exempt investors. Passive U.S. equity was up nearly 20% for the year ended Dec. 31 and 166% over the past five years for Vanguard to $1.57 trillion, while BlackRock has seen growth rates of only 2.9% and 76%, respectively, to $948.4 billion.

He noted that BlackRock is heavily investing in these areas, especially in alternatives, in response to client demand.

BlackRock had a big win when British Airways, Harmondsworth, England, selected the firm for an OCIO assignment totaling £26.8 billion ($33.5 billion).

Managers look back with nostalgia at 2021

In contrast, sources stressed that Vanguard is far more focused on the defined contribution plan market with a total of $2.045 trillion under management, a $655 billion and growing gap on second-ranked BlackRock as of Dec. 31, P&I data showed. Vanguard’s DC assets were up 126.4% over the past five years, compared with 100.9% for BlackRock.

“Vanguard has been pushing much harder in its defined contribution plan business, especially its target-date funds, than BlackRock and is very focused on its ETF franchise,” said Greggory Warren, financial services sector strategist for Morningstar Inc., Chicago, in an interview.

“Both Vanguard and BlackRock are seeing significant ETF growth. But when it comes to defined contribution plans, Vanguard is hitting the ground a little bit harder than BlackRock,” Mr. Warren said.

He added that Morningstar data showed that both firms had strong annualized organic growth in its exchange-traded funds over the past five years with 17% for Vanguard and about 12% for BlackRock, Mr. Warren said, adding that Vanguard’s lower ETF pricing caters to retail investors.

He noted that as a privately held company, Vanguard has worked on driving down costs as much as it can since there aren’t shareholders to appease.

“It’s easy to beat up on BlackRock vs. Vanguard. Although BlackRock has stumbled here and there over the years, BlackRock likes to be seen as the guys in the white hats in the industry and it does have a pretty good reputation,” Mr. Warren said.

As for the very public persona of Laurence D. “Larry” Fink, BlackRock’s chairman and CEO, as of late he has been opining on ESG and other issues, Mr. Warren said “Larry is more of a lightning rod. He’s being more vocal about issues like ESG and other issues in an effort to be transparent.”

Retail assets under management was one area where BlackRock has had higher growth in the year; it was up 22.4% for the year ended Dec. 31  and increased 132.5% for the five-year period compared with Vanguard’s 10.3% increase for the year and growth of 67.4% over five years, P&I survey data showed.

“BlackRock is one of the industry’s very durable investment franchises and is differentiated from other money managers because of the advantages that Aladdin, its risk-management system, provides for internal use as well as by clients and other external users,” said Catherine A. Seifert, vice president and equity analyst, CFRA Inc., New York, in an interview.

Another advantage is the revenue Aladdin generates, an asset that Vanguard doesn’t have, Ms. Seifert said.

But Ms. Seifert warned that “BlackRock is at some risk because it doesn’t have a large alternative investment capability, an area that’s in high demand especially from institutional investors” and speculated that at “some point, it would not be surprising to see BlackRock make a significant acquisition to broaden its alternative investment offerings.”

In contrast to what BlackRock’s Mr. Buchwald said about investor preferences in 2021, investors still are very interested in investing in passive strategies, said Jeffrey DeMaso, New York-based director of research for Adviser Investments LLC, in an interview.

“The recent surge in assets at Vanguard is the result of the shift from active managers to index funds, not just in 2021 but over the past decade. The trend has been the same whether we are talking about retail or institutional investors. Index funds have become the default choice,” Mr. DeMaso said.

He cautioned that at some point — and at some asset level — those growth rates will have to come down for Vanguard, noting “Vanguard is no longer always the cheapest option around, but they have the reputation and brand power that others don’t,” Mr. DeMaso said.

Adviser Investments manages about $6 billion in diversified portfolios for investors.

Even as BlackRock has lagged behind Vanguard in recent asset percentage gains, Mr. Schmidt said “BlackRock tends to be utilized more in the larger market rather than across all market segments.”

“It’s not clear how 2022 will impact these firms. I expect both firms to continue to gain market share. When or if Vanguard will overtake BlackRock (in total assets) is something to watch for in the future,” Mr. Schmidt said.

How P&I compiled the managers data