Energy assets down 35.2% while MLP assets experience a whopping decline of 89.7%

Assets in energy and master limited partnerships for top money management firms continue to fall, continuing a five-year shift out of the sector that has long been in transition.

Investor interest these days has shifted to renewable energy strategies. What's more, while fewer managers are interested in investing in portfolios of MLPs, private equity firms see them as deal targets, buying the companies and taking them private.

Energy investments have been hit by a double whammy this year of dropping oil prices, with domestic crude prices falling to below zero in April, and a worsening economic outlook due to the global pandemic. The Alerian MLP index has posted a -32.96% return year-to-date through May 27. 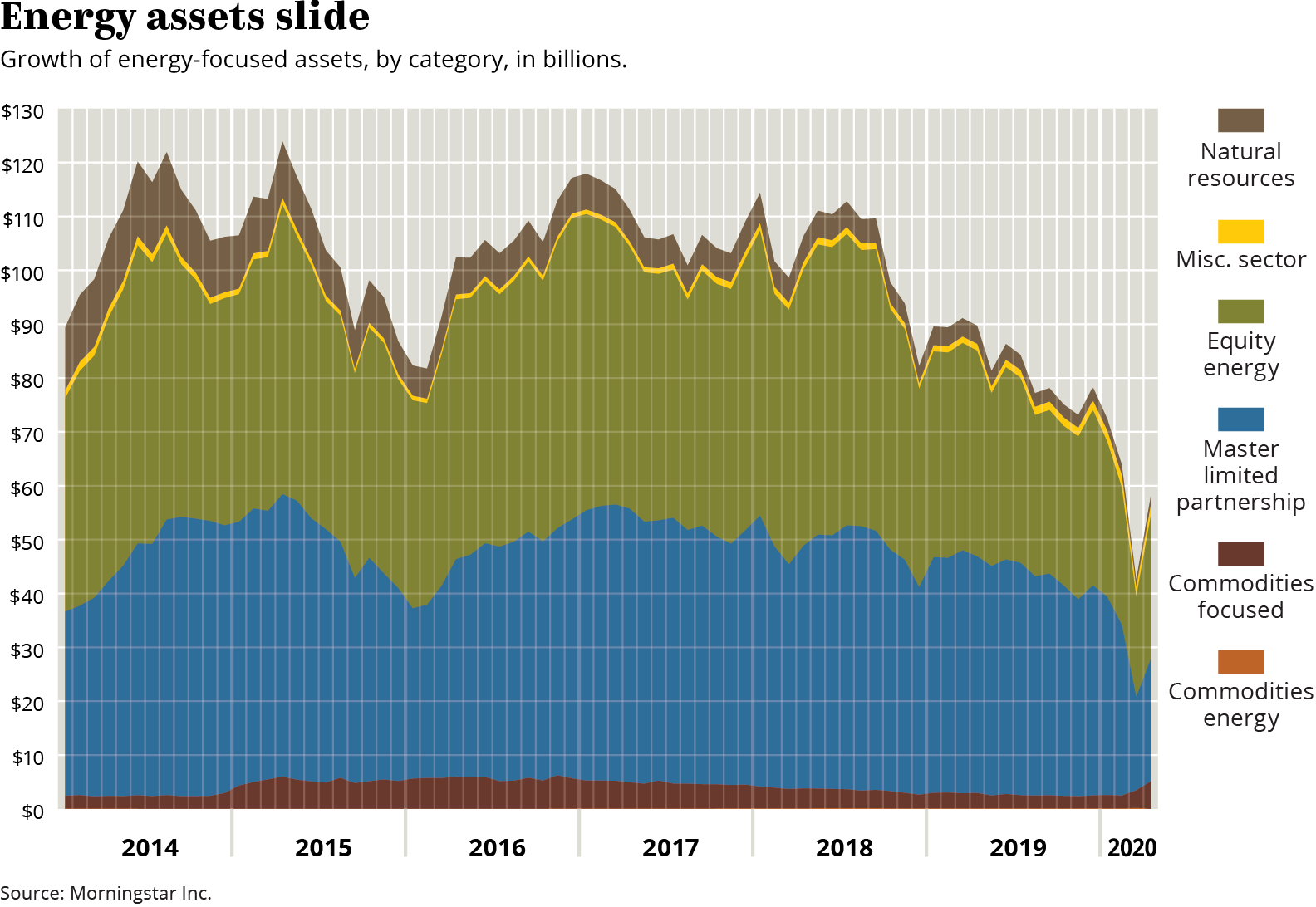 Los Angeles-based alternative investment manager Ares Management Corp. tops the small list of energy managers with $928 million in energy assets, down 24.3% as of year-end 2018 and 53% from $1.97 billion at the end of 2015.

Indeed, all of the top four energy managers had assets fall in the year ended Dec. 31. Second place Nuveen saw its energy assets fall 37.9% to $765 million.

Energy amounted to roughly 3% of Ares' $148.6 billion in total assets under management as of March 31, said Michael J. Arougheti, co-founder, CEO and president during the Ares May 6 earnings call. About 1% of Ares' energy assets are in oil and gas exploration with the remainder in renewable energy and midstream infrastructure. "If you were to look at those exposures relative to public indices, they're meaningfully underweight," Mr. Arougheti said.

Ares executives declined to comment beyond statements made in the firm's earnings call.

Ares is not the only publicly traded alternative investment firm to tout its modest exposure to the energy sector. Apollo Global Management Inc.'s Martin Kelly, chief financial officer and co-chief operating officer, said during the firm's April 30 earnings call said that its private equity portfolio fell 21.6% in line with the equity market downturn but that just 4% of its private equity portfolio was invested in energy as of March 31.

Carlyle Group Inc. CEO Kewsong Lee noted during the firm's May 1 earnings call that the energy sector is undergoing "a significant structural dislocation on both the supply and demand side that is likely to take more than a few quarters to play out." As of March 31, Carlyle's energy exposure is mostly in separately managed funds. Carlyle had about $13 billion in energy, or 9% of the fair value of its $216.9 billion in assets under management as of March 31. About 2% of the fair value of its private equity portfolio was in energy, he said.

However, Carlyle executives expect to see investment opportunities in the energy sector, Mr. Lee said. "Over the long term, we have more than $4 billion in dry powder to invest into new opportunities across our energy-related funds and what could be attractive valuations," he said during the call.

Jonathan Gray, Blackstone Group LP's president and COO, also said firm executives anticipated future investment opportunities in energy. There is opportunity to lend to midsize companies, including energy companies that are facing challenges because they do not have access to the public markets for liquidity and banks are more constrained in the current environment, Mr. Gray said during Blackstone's April 18 earnings call.

Many investors have exposure to energy in their infrastructure and real asset portfolios. This year's P&I manager survey results show U.S. institutional tax-exempt infrastructure assets were $42.3 billion as of Dec. 31, up 38.8% from the prior year and 165% from Dec. 31, 2014. In 2019, natural resources assets under management worldwide hit a record of more than $760 billion, with the majority in energy investments, according to Preqin. Also last year, natural resources funds raised $109 billion, and were boosted by the closing of mega infrastructure funds that also invest in energy, Preqin data show.

So far, oil and gas have been hit the hardest of all infrastructure assets, especially in the U.S., said Gordon Bajnai, London-based partner and global head of infrastructure at advisory firm Campbell Lutyens & Co.

Oil and gas has been hit by both the coronavirus pandemic and infighting between Saudi Arabia and Russia on oil prices, said Mr. Bajnai, who was prime minister of Hungary in 2009-2010.

Aside from oil and gas, midstream assets also are now perceived by investors as a high-risk sector now, he said. "As the dust settles, some investors will look cautiously at midstream," Mr. Bajnai said.

At the same time, energy managers are expected to invest more capital in the renewables sector. Most investors expect that the rollout of renewable energy will continue and perhaps accelerate, he said. "Globally, people expect governments will use sustainability and 'green' as a major element of stimulus," Mr. Bajnai said.

Pension funds and other asset owners will continue to be pressured to get greener, he said. "People have experienced living in cities where the smog levels are disappearing" as a result of global stay-at-home orders, he added.

And managers are raising capital to take advantage of the shift toward renewable energy, Preqin data show. In 2019, renewables made up 68% of energy-focused funds and 44% of aggregate capital raised, according to Preqin.

Meanwhile, the time in the spotlight has passed for MLPs, which were once a popular and growing vehicle for accessing the energy sector.

Six or 10 years ago, the imperative was to invest in MLPs, he said. "The MLP structure is great. … Companies that use it well and are well governed will be successful," Mr. Rosenlicht said. But now there is a greater focus on the underlying assets, he said.

"How good is the company's balance sheet and liquidity profile? How good is the governance and alignment of management with investors?" Mr. Rosenlicht asked, adding that these are questions Cohen & Steers considers.

While the number of deals has slowed this year, private equity firms have continued to acquire MLPs, according to index sponsor and research firm Alerian.

This year, a Blackstone-led consortium that included Singapore sovereign wealth fund GIC Private Ltd. completed its acquisition and privatization of MLP Tallgrass Energy Partners for $3.5 billion, according to a recent Securities and Exchange Commission filing.

How P&I compiled the managers data