Commentary: Relativity and volatility – a special relationship
Skip to main content
April 22, 2020 09:00 AM

Why hedging and asset allocation are equally important ingredients in an uncertain world.

It is too early to define this decade, but it seems unlikely that we'll see a repeat of last century's "roaring '20s." From tariffs and trade wars, to climate change and the coronavirus, economists worldwide are watching indicators carefully.

Following a period of strong performance in equity markets, particularly in the U.S., and a bond rally in the U.S. and the U.K., stocks recently plunged on fears of a global pandemic and investors now seek safer havens as the U.S. Federal Reserve has cut interest rates to zero. For a pension plan, any volatility on the journey to the ultimate funding level matters.

Over the last two years, the funding levels of pension plans in the U.K. have fared slightly better than those in the U.S. on average.

Of course, statistics are never that simple. The regions' regulatory agencies require different outcomes based on their attitudes toward risk and — importantly — valuation. 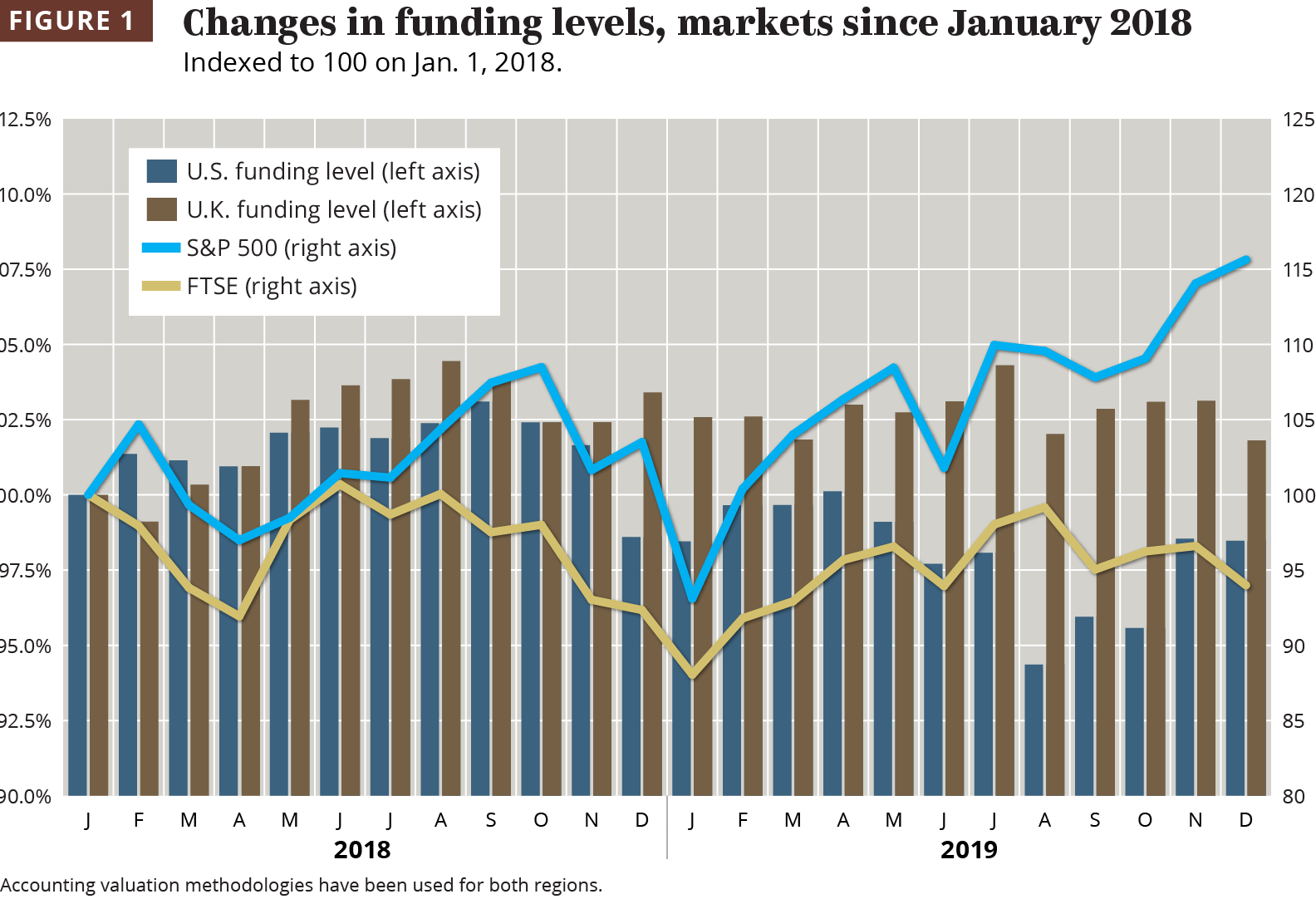 Factoring this into our analysis, Figure 1 shows that a gap of almost 3 percentage points of funding levels in the regions opened up.One contributing factor could be that the valuation methodologies in both jurisdictions are driven by high-quality bond yields in the respective markets. While we have seen some deviation in relative corporate bond yields on either side of the Atlantic, this deviation alone does not explain the disparate outcomes.

Deficit contributions also have an impact, but even when combined with any variation in bond yields they don't account for the full difference. Further analysis suggests that a material contributor has been variation in both asset allocation and interest rate hedging strategies. Is one investment strategy, then, more important than the other for a less volatile journey?

A look at asset allocation

When it comes to asset allocation, the picture is as you'd expect. 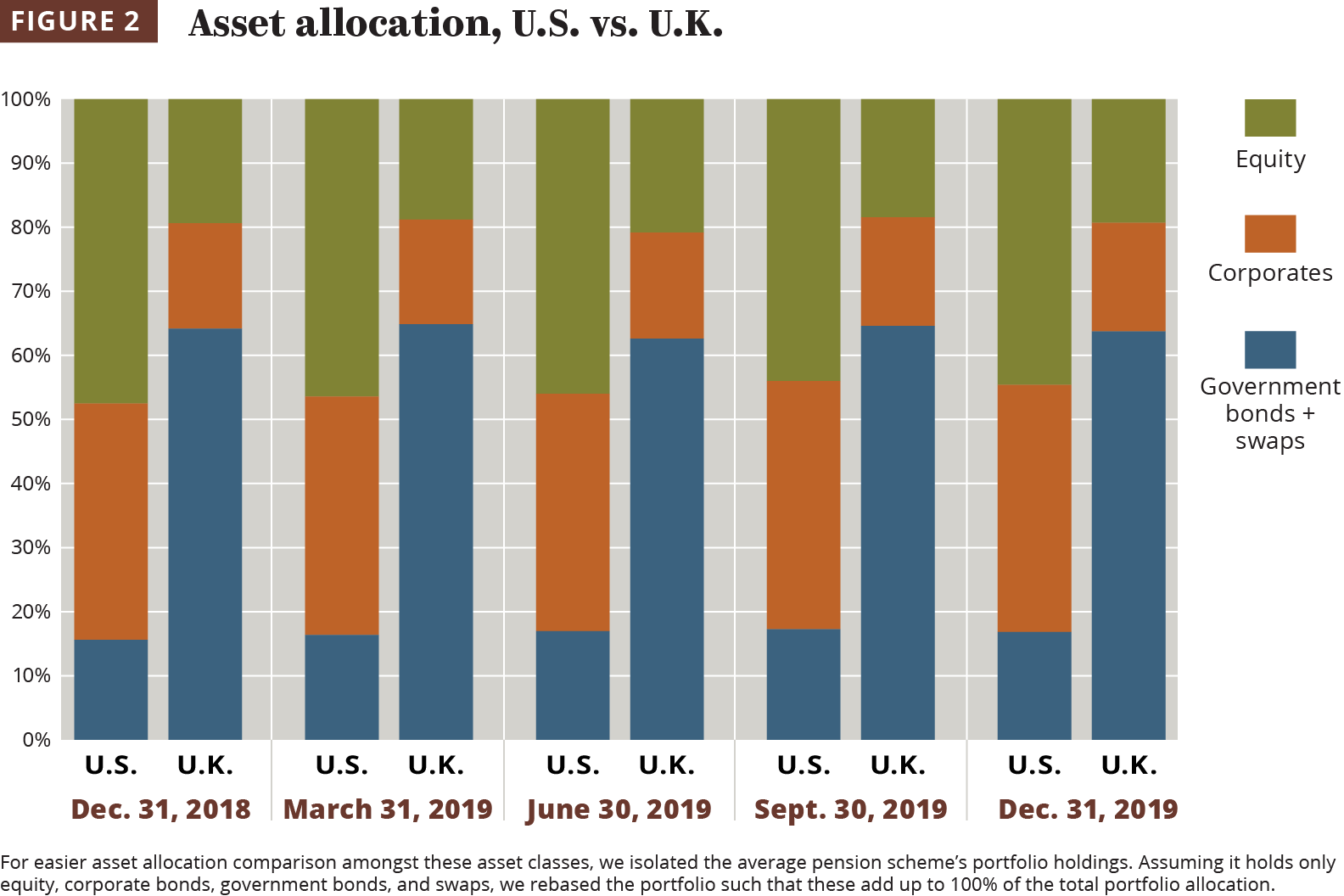 U.S. DB plans hold, on average, more than double the amount of equities and corporate bonds than U.K. plans. When it comes to Treasuries and government bonds, however, U.S. plans typically hold just under a third of what their U.K. counterparts do in government issuances.Still, volatilities in both asset and liability values often contribute equally to relative performance, especially during unstable periods.

U.S. equities substantially outperformed U.K. equities over 2019. Yet, despite the double exposure to equities within U.S. pension plans, the average U.S. funding level has dropped almost 3 percentage points against the U.K.'s. Why?

The steady increase in corporate (and government) bond returns over 2019 has meant a material rise in liability values over this period, which have outpaced the increase in asset values — especially for those that are less well hedged against rate movements.

Hedging levels in the mix

Having uncovered that differences in funding levels emerged principally over 2019, and having established that asset allocation alone doesn't fully explain the divergence, we turned our attention to interest rate hedging. In Figure 3, we extract average hedge ratios using interest rate sensitivity. 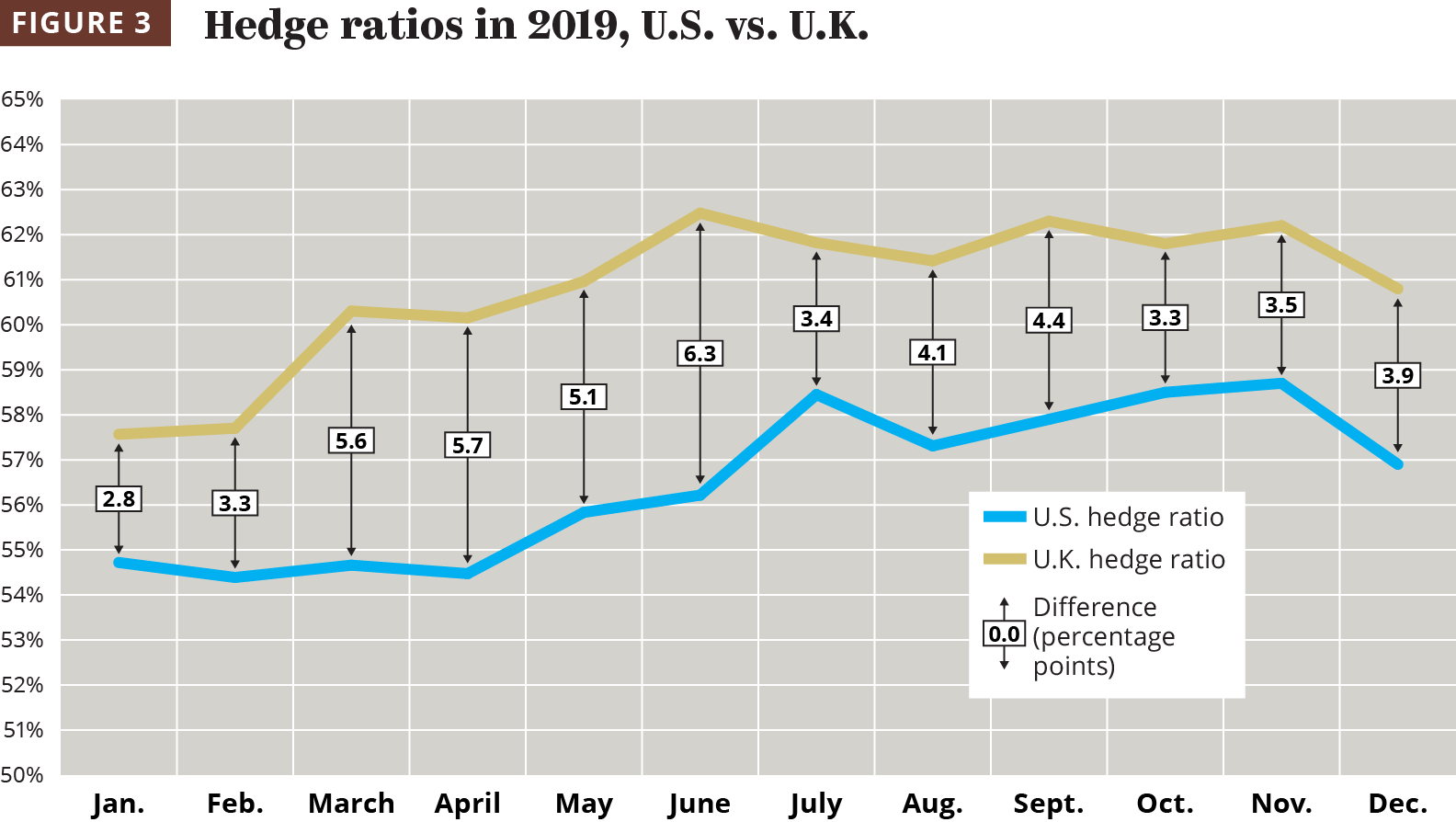 Although U.S. plans have seen a slight increase in hedging against interest rates since the beginning of 2019, hedging has played a more central role for the average U.K. pension plan over the same period. This is true even after considering relative market moves; hedging levels have been typically 2.5 to 7 percentage points higher among U.K. pension plans over the last two calendar years.

It therefore seems clear that both asset allocation and hedging levels play an equal part in managing the balance between risk and return. Any plan or sponsor concerned about funding-level volatility would be wise to have a clear hedging strategy within its overall asset allocation approach.

Key to any meaningful analysis is the understanding that it's all relative.

Pension plans in the U.K. and the U.S. are governed by different rules, and the incentives to hold one asset over another vary. There's no right or wrong answer as to whether pension funds should focus on return-seeking vs. matching asset types to improve the funding ratio, or whether they should instead focus on hedge ratios as a means to a less volatile funding-level improvement. But one thing is certain: neither strategy should be overlooked nor considered in isolation.

What does all this mean?

If the same drivers were observed but in the opposite direction, particularly with rising interest rates, the outcome would have been correspondingly different. U.S. plans would have most likely outperformed their U.K. counterparts during the period, assuming equity markets in the U.S. continued to outperform equity markets in the U.K.. Nevertheless, even when markets dropped by more than 20% in recent weeks, they tended to drop simultaneously across the two regions due to positive correlations, on average. U.S. and U.K. retirees, however, must be protected regardless of what happens to equity markets, implied asset classes correlations or interest rates. Although volatility and asset allocation during the journey of a pension plan matter, asset allocation combined with the right level of hedging matters most of all.

Forward-thinking pension plans test their strategy against multiple alternatives in several markets using both stochastic modeling and scenario analysis. Doing so helps uncover the optimal balance of risk and return that suits both the jurisdiction and the plan sponsor's business environment.

Asset allocation strategies will always vary; the challenge is to determine the right strategy in the long run.

Christian Hristov is product owner at RiskFirst, a Moody's Analytics company, London. This content represents the views of the author. It was submitted and edited under Pensions & Investments guidelines, but is not a product of P&I's editorial team.

Pension funds sink billions into whole new world of risk
Hedge fund managers are warming up to custom funds
Commentary: For plan sponsors, derivatives shouldn’t be a dirty word
Recommended for You

Commentary: Why should investors care about treasury management?

Commentary: Without a national retirement policy, Americans face a future of pension crises