Hedge fund investment down in 2019, but redemptions are too

Christine Williamson
Reprints Print
Luba Nikulina said it isn’t surprising redemptions are down as investors focused on renegotiating terms and strategies in 2019.

Institutional investment in hedge funds and hedge funds of funds slowed to $9.2 billion in 2019, down 8.5% compared to the prior year, even as full and partial redemptions dropped 25%.

The decline in 2019 inflows is in sharp contrast to 2018 when investments in hedge funds and hedge funds of funds increased 10.7% to $10.1 billion over the previous year, Pensions & Investments' analysis of reported investment activity showed.

In a longer-term comparison, asset owners invested 20.5% fewer assets in hedge funds and hedge funds of funds last year than in 2015, when assets peaked at $11.6 billion over the five years ended Dec. 31 analyzed by P&I.

A bright spot in P&I's analysis was the aggregate full and partial redemptions from hedge funds, which were down 8.3% to $1.3 billion. Hedge funds-of-funds redemptions also dropped 37.1% to $559 million in 2019. 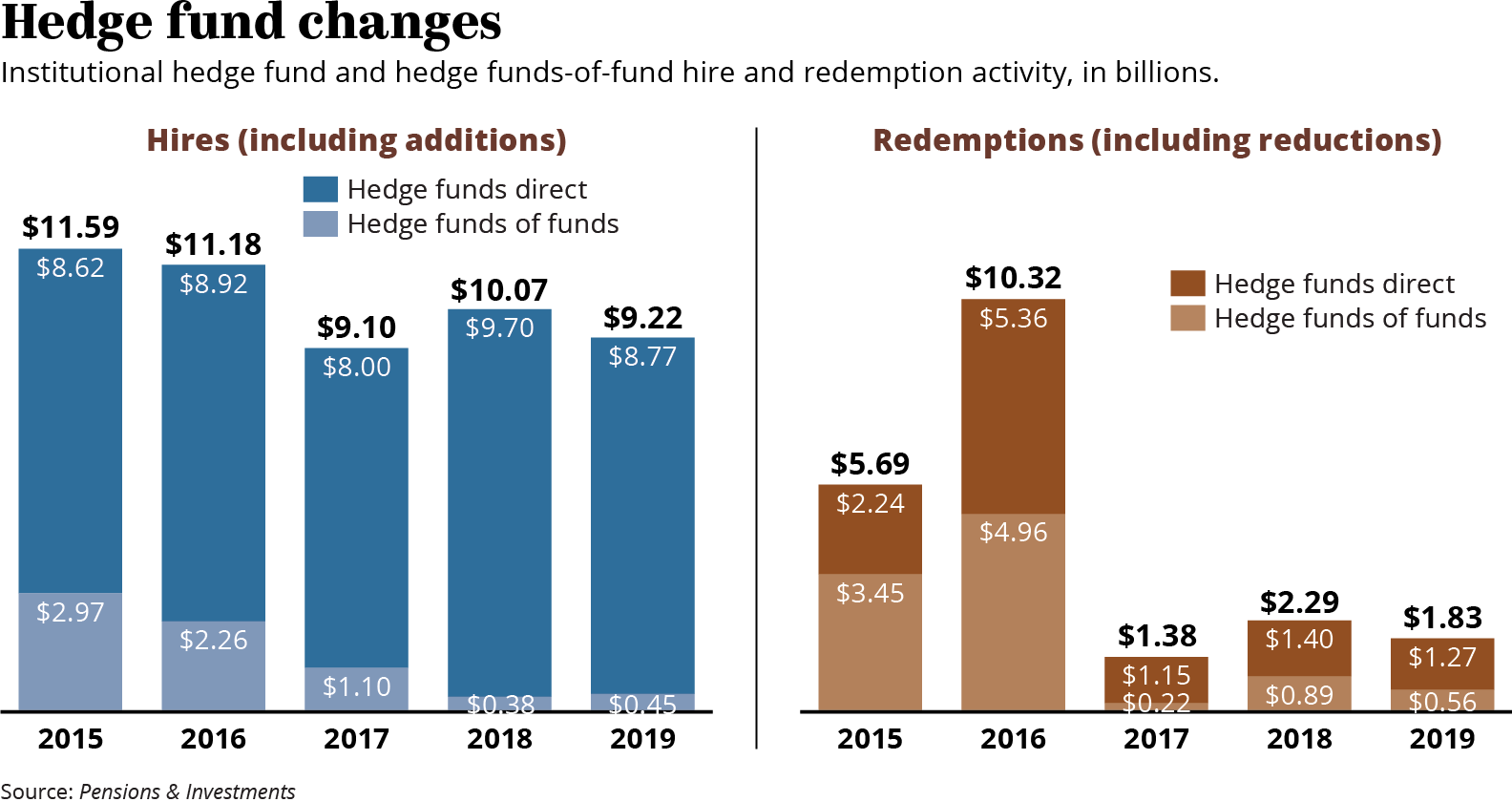 "Inflows into hedge funds slowed between 2018 and 2019," said Luba Nikulina, global head of research at Willis Towers Watson PLC, London, in an interview. "A year ago, many investors were questioning their hedge fund allocations. But now, many are rethinking their hedge fund portfolio construction and renegotiating terms and strategies with their managers. It's not surprising that redemptions are down," Ms. Nikulina said.

Ms. Nikulina said Willis Towers Watson consultants are advising clients to maintain their hedge fund allocations "because they are a very good diversifier to equity and fixed-income asset classes in anticipation of markets moving to a lower-return environment."

Sources said institutional investors might also be more comfortable remaining in hedge funds given that the industry produced its best aggregate return in a decade.

The HFRI Fund Weighted Composite index returned 10.4% in 2019, according to index provider Hedge Fund Research Inc. That's the best single-year return since year-end 2009, when the index was up 19.98%.

"While the core U.S. economy and employment remains strong, the 2020 outlook reflects positive but tempered expectations as a result of rising geopolitical risks and increasing conflict in the Middle East, continuation of trade tariff negotiations and the uncertainty of the U.S. (presidential) election," said Kenneth J. Heinz, president of Chicago-based HFR, in a news release accompanying the firm's year-end hedge fund performance report.

While the total invested in hedge funds and hedge funds of funds in 2019 was lower than the prior year, several pension funds continued to build out or reconfigure their hedge fund portfolios.

The investors with the largest allocations to hedge funds in 2019 from P&I's universe were:

SURS has a long-term target allocation of 20% to the crisis risk offset portfolio, according to the system's 2020 investment plan. SURS did not respond to requests for additional information.

The $16.8 billion Orange County Employees Retirement System, Santa Ana, Calif., invested $150 million with a managed futures firm as an addition to the trend-following portion of its $1.7 billion risk-mitigation portfolio.

The system also invested $150 million in a systematic trend-following manager outside the risk mitigation portfolio.

There also were a few large terminations in 2019, including the $52.3 billion Teachers' Retirement System of the State of Illinois, Springfield, which had the highest level of hedge fund terminations — $904 million from seven managers — in 2019.

The fund also invested a total of $30 million in 2019, with $200 million going to a new manager and $50 million in an additional allocation to an existing manager.

"The TRS board of trustees closely monitors all of its asset classes on a routine basis and develops annual plans based on the positioning of those portfolios in light of current market activities," said spokesman David Urbanek in an email.

"The commitments and terminations TRS initiated during fiscal year 2019 reflect the desire of the board to maintain the diversifying strategies portfolio as an important part of the system's overall investment plan," Mr. Urbanek said.

As part its mass termination of 19 managers among several asset classes in July, the Alaska Retirement Management Board, Juneau, terminated one hedge fund manager and one hedge fund-of-funds manager that ran a total of $555 million.

Board documents said the reason was underperformance.

Citadel, Point72 back Melvin with $2.75 billion after losses