Emerging Market Debt: Into the Wild

It's been a volatile year for emerging market debt, but conditions have settled down over the last month or two. That said, institutional investors looking to take advantage of the diversification and return possibilities that the asset class can offer need to fully understand the potential risks from fiscal, monetary and political perspectives — and they need to be patient.

“The sell-off that we've seen in the last five months has been a combination of macro and idiosyncratic events, and because of the differences among emerging market countries, it's been more on the idiosyncratic side,” Matthew Murphy, institutional portfolio manager at Eaton Vance, told a P&I webinar audience recently. “The macro-environment has stabilized, and some of the problem countries — Argentina and Turkey in particular — are attempting to adopt and implement traditional economic policy. We think that is a good thing.”

The macro-economic factors that spurred the sell-off included a rising U.S. dollar; rising U.S. interest rates along with fears that the 10-year U.S. Treasury bill would reach 4% quickly; and concerns over fading economic prospects in Europe. On the idiosyncratic side, Murphy said, a new round of U.S. economic sanctions on Russian assets and missteps in Argentina and Turkey drove down emerging market debt prices.

The sell-off eased in July, but in August increased tension between the U.S. and China led to weakness in the Chinese yuan, and additional missteps from Turkey and Argentina resulted in increased selling. In September, markets again stabilized as Argentina and Turkey moved toward adopting and implementing more orthodox and traditional fiscal policy.

“But it's been a very long six months,” Murphy said.

In Argentina, President Mauricio Macri had been moving the country in the right direction from a monetary and fiscal policy standpoint, with the country's central bank exhibiting much needed independence. But in May, the central bank adjusted its inflation target higher without raising interest rates, which is what investors expected. That move — or lack thereof — led to a quick 30% drop in the currency, led mainly by local investors selling Argentine pesos for U.S. dollars.

In August, Macri said the government had reached an agreement with the International Monetary Fund regarding its aid program. Initially, investors cheered. The problem was, however, that he had not actually sealed such an agreement. In the ensuing sell-off, credit spreads widened to roughly 1,000 basis points before coming back in.

Turkey's issues are more political than economic, according to Murphy. To begin with, comments from President Recep Tayyip Erdogan in an interview earlier this year doused investors' hopes that the Turkish central bank would exhibit any independence. Then, in August, he refused a U.S. request to return a U.S. pastor held on charges of espionage, which led U.S. President Donald Trump to say the U.S. would double tariffs on Turkey. (On Oct. 12, the pastor was released and returned to the U.S.)

“He pulled the trade-card weapon, and the currency weakened substantially,” Murphy said, adding that, as in Argentina, credit spreads widened to a maximum of around 1,000 basis points.

Spreads in both countries have tightened a bit, and Murphy said he and his team think there is “significant” value in Turkish credit, mainly because with a debt-to-GDP level of 28%, the country has the ability to service its debt.

He added, however, that the mismatch of Turkish companies earning revenue in Turkish lira while paying down debt in U.S. dollars will hit the country's banking sector in terms of nonperforming loans.

“We made a fairly draconian assumption that half of the banking sector is sitting on nonperforming loans, which would require a sovereign bailout package,” Murphy said. “That would bring Turkey's debt-to-GDP from approximately 28% to 48%. But even with the increase, we think the country will be able to service that debt going forward, and we do not expect Turkey to lose market access.”

Putting the recent sell-off in historical context, Murphy pointed out that since 2009, there have been four times in which the JPM GBI-EM Global Diversified index fell more than 11% in a three-month period. Each time, the market enjoyed a sharp snapback rally, posting double-digit returns one year after the asset classes bottomed out.

That doesn't mean, however, that opportunity is completely absent. Indeed, Murphy noted that not every emerging market country suffered a currency meltdown this year.

“Our view on currency has been neutral for approximately the last five months, and we reasonably expect to be upgrading our view fairly soon,” he said. “The reason is that we expect central banks to hike rates to maintain their credibility from an inflation-fighting standpoint. Those higher rates and that higher carry should make the risk/return profile much more attractive.”

But the upgrade isn't likely to happen until those central banks actually raise rates, he added.

In addition, when those same central banks increase interest rates, that will open up opportunity in fixed income.

“We expect that at some point, as long as the [emerging market] countries follow through in hiking rates to fight inflation, it should be a fairly attractive opportunity to take long-duration risk in these markets. Today, however, we don't feel comfortable doing that.”

In the areas of sovereign and corporate credit, Murphy said, today those asset classes do not offer enough value for investors.

“While spreads are widening and look fairly attractive,” he said, referring to sovereign credits, “the credit quality of the constituents, from our perspective, has significantly deteriorated, and there's not a compelling reason to own credit on the sovereign side.”

Similarly, corporate credits do not offer adequate compensation for the risk, he added.

“We are emerging market managers who want to find some opportunities and pockets of value,” he said. “But broadly speaking, in the corporate space we think things can get much worse before they get better.”

The key actions to monitor across the asset class are how individual central banks perform and whether the countries continue to follow traditional fiscal and monetary policies. So patience and long-term thinking by investors are critical.

“Across all these countries and assets, there are some pockets of value and some individual countries or corporates that we find attractive,” Murphy said. “But from a very broad perspective, while valuations are compelling, we don't feel it's prudent at this point to take significant long risk in the asset class.” ■ 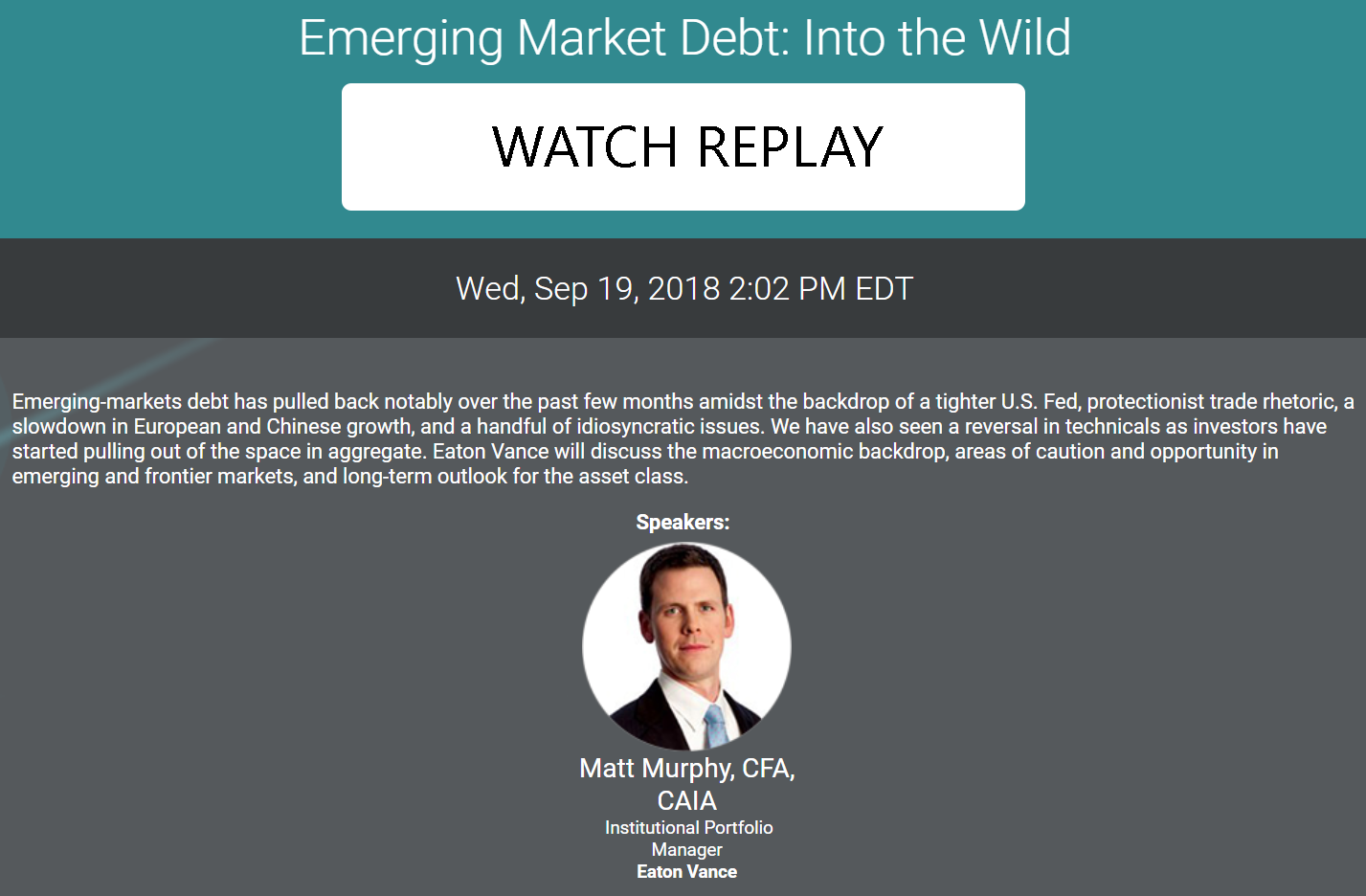 The views expressed are those of the Strategy's investment team and are current only through the date stated on the cover of this presentation. These views are subject to change at any time without notice based upon market or other conditions, and Eaton Vance disclaims any responsibility to update such views. Different views and opinions may be expressed by others. These views may not be relied upon as investment advice and, because investment decisions are based on many factors, may not be relied upon as an indication of trading intent on behalf of any Eaton Vance strategy.