Active vs. passive: the age-old debate

Many active managers have disappointed in recent years. As a result, some investors now believe that “going passive” provides a safe harbor from underperformance and perceived risks of active management. Hence, passive investing continues to gain market share at a rapid pace.

However, this might not be the right time to make an active decision to go passive.

The late '90s was a challenging period for active managers. Conversely, from 2000 through 2010, more than 50% of active managers in the eVestment U.S. large cap universe outperformed the Russell 1000 index, on a rolling three-year basis.

More recently, since 2011, more than half of the active U.S. large-cap managers in this same eVestment universe have underperformed the Russell 1000 on a rolling three-year basis — a striking resemblance to the late '90s.

In addition to cyclicality, performance by active managers often tends to be influenced by the direction and magnitude of market performance. History shows that active managers tend to do better in moderately up or down markets and underperform in strongly up markets.

Should we rethink active management?

Not being subjected to all the downside is particularly important when you consider that a portfolio drawdown of 50%, such as what many investors experienced as a result of the global financial crisis — requires a rebound of 100% just to get back to even (see the exhibit below). Limiting losses during a market downturn, coupled with the effects of compounding, has the potential to increase a portfolio's return over the long term. 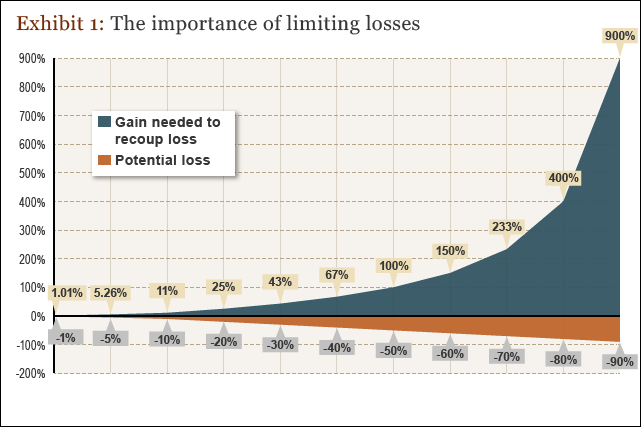 Ideally, investors would like to benefit in all market environments.

Identifying a strategy that has the potential to outperform in down and modestly rising markets is essential for investors seeking to meet their long-term goals. Absolute-risk strategies provide exposure to the equity market with a lower level of volatility, regardless of the market environment. In periods of crisis, the greater the volatility reduction a portfolio can provide, the better. However, in a sustained bull market, too much volatility reduction may not be needed and is likely to sacrifice returns.

Dynamically adjusting the level of risk reduction in a portfolio to become more defensive during crisis periods, and more active during normal market conditions is the preferred scenario. Constructing a portfolio that adapts to the level of market volatility as a result of dynamic risk reduction offers the potential for a proper balance between capital appreciation and capital preservation. Investing in managed-volatility portfolios that aim to achieve this dynamic volatility reduction based on volatility estimates means not having to rely on forecasting market or stock returns — a very imperfect science!

As long as confidence in a manager's investment process and team, and alpha source remains strong, a shift to passive could impede any recovery once the manager's investment process is back in favor. A skilled active manager can add significant value over time, particularly during down markets. Passive management is only as safe as the asset class it seeks to replicate, and market risk can be significant at times (think 2008). Investors who choose to go passive will feel the full force of market risk, while an active manager has the ability to mitigate some of that risk.