Investors get that sinking feeling about investment-grade bonds

Institutional investors are staring down potential massive downgrades in their investment-grade corporate bond portfolios that could force selling at losses and cause further damage to portfolio returns.

As the coronavirus lockdown continues to impact corporations' bottom lines on both sides of the pond, about $215 billion U.S. and €100 billion ($108 billion) European investment-grade debt is expected to be downgraded to high yield this year, according to J.P. Morgan Ltd.'s research published March 23.

Despite the Federal Reserve's support for bond prices announced March 23 and extended April 9, investors could still see fundamental losses, sources said. The Fed, through a secondary purchase program, could scoop up to $250 billion worth of investment-grade bonds including those downgraded to junk — known as fallen angels — as well as exchange-traded funds that track U.S. investment-grade corpo- rate bonds and U.S. high-yield bonds. And when more index providers reconfigure investment-grade bond benchmarks at the end of April, additional investment-grade investors could become forced sellers of bonds that may no longer fit the rules of their portfolios.

"The Fed's announcement is helping. But even if the spreads on investment-grade and high-yield corporate bonds will be controlled by the Fed's purchases and guarantees, the credit quality will deteriorate for investment-grade and high-yield companies," said Olivier Rousseau, executive director of the €33.6 billion Fonds de Reserve pour les Retraites, Paris, in a telephone interview.

Fallen angels are an issue as a large portion of companies with BBB- ratings have increased their leverage, he said, adding that a large proportion of these credits will move into the high-yield space. 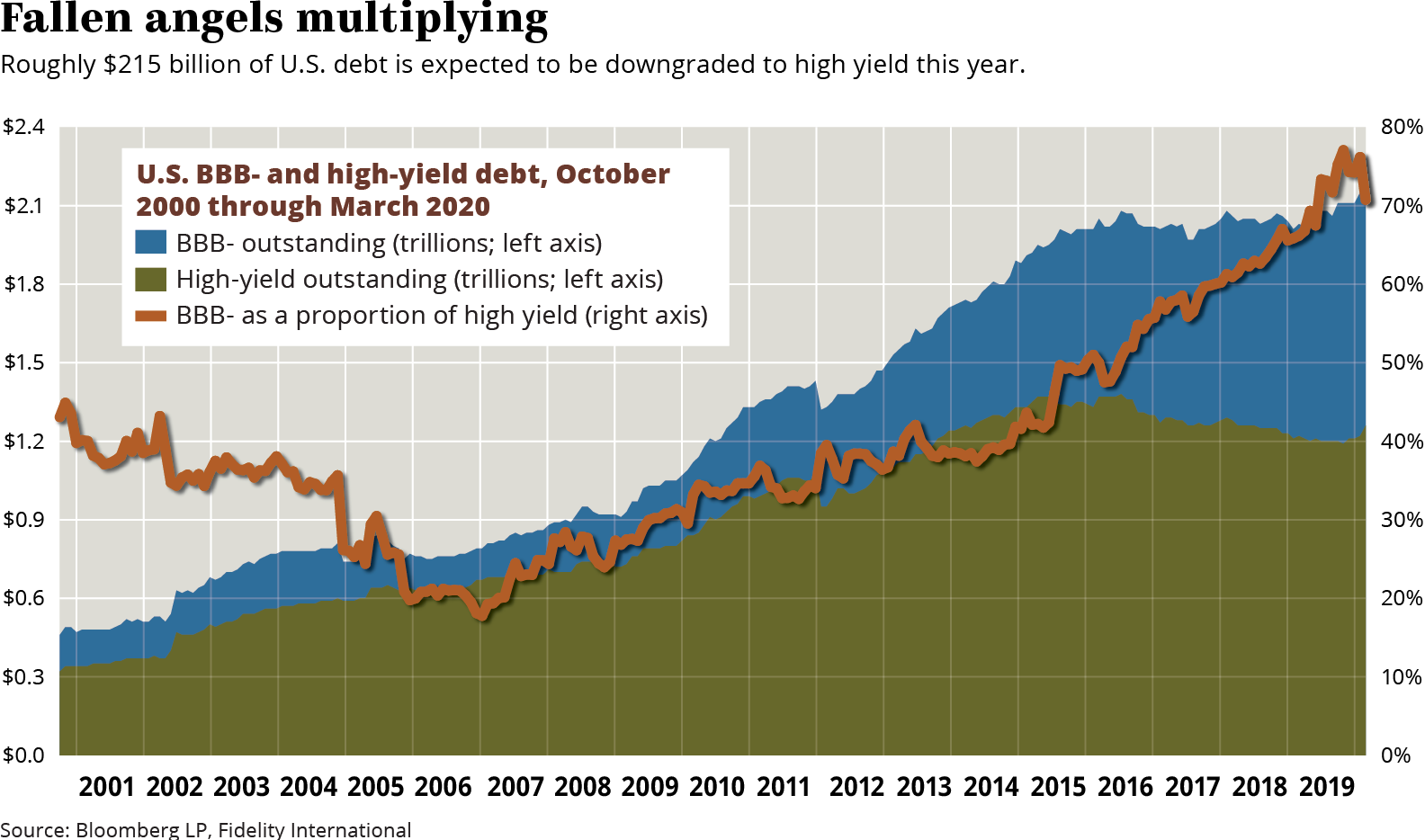 Christine Farquhar, global head of the credit investment group at Cambridge Associates Ltd. in London, added in a separate telephone interview: "There will be companies that will struggle to pay the coupons and that are having difficulties raising the money to repay the maturing bonds."

"There will be some actual defaults and some of the borrowers will not repay all of the money," she added.

Sources said the risk of investors becoming compelled to sell fallen angels in the coming months will become more acute when downgrades of BBB- bonds — which are only one level above junk bonds — cause BB-rated bonds to swell as a proportion in broad fixed-income indexes.

Managers of both passive and active strategies will be forced to reallocate to maintain portfolios within benchmark constraints, wrote Martin Dropkin, global head of research, fixed income at Fidelity International in London, in a white paper on April 9.

The average exposures of active investment-grade credit managers to BBB-rated debt in 2019 was 51%, in comparison with benchmark allocations that had a 40% to 50% exposure, according to consultant bfinance International Ltd. Bfinance said in a report that anecdotally, managers expect 25% to 50% of BBB bonds to be downgraded or have a negative credit watch.

S&P Global Ratings, a market intelligence and research division of New York-based S&P Global Inc., said in a report April 16 that the number of fallen angels has risen to 23 this year from two at the end of January. As of the same date, there were 96 companies with bonds rated BBB- by S&P Global Ratings with negative outlooks that could become fallen angels.

Passive portfolios benchmarked against Bloomberg LP's indexes have already had to remove newly downgraded bonds — estimated to be worth $79 billion by J.P. Morgan — from investment-grade benchmarks because the firm has already reconfigured its indexes. Other providers decided to wait until the end of April.

In active portfolios, unless investors permitted their managers to hold a proportion of high-yield bonds in investment-grade mandates, the managers running portfolios benchmarked against Bloomberg Barclays indexes would have already taken action to sell fallen angels.

Catherine Matthews, product specialist in the fixed-income team at Western Asset Management Co. Ltd. in London, said the manager has some clients that had to sell these bonds because of investment guidelines within its $100 billion investment-grade corporate bond business.

Ms. Matthews said a small proportion of Western's pension fund clients have a 30-day rule to dispose of assets that do not match benchmarks. These clients probably represent 1.5% of all of assets invested in investment-grade corporate bond strategies, Ms. Matthews said.

Some of the other clients have the flexibility to include up to about 10% of high-yield bonds under the existing mandates, she added.

Corporate bond managers agreed that clients that have that flexibility to hold off selling their downgraded investment-grade bonds should not be selling immediately following the downgrades.

Ed Farley, London-based managing director and head of the European corporate bond team at PGIM Fixed Income, which has more than $320 billion in investment-grade corporate bond strategies, added: "We are loath to recommend selling fallen angels at where they trade now. We have spoken to clients and are working toward different solutions with each of them."

Mr. Farley said some of the firm's clients are prepared to be holders of fallen angels for longer and gave permission to increase high-yield buckets within investment-grade mandates.

Mr. Farley added as an example that clients that did not want to hold high-yield corporate bonds were prepared to extend the holding period to 90 days from 30 days. "There is currently much more willingness to hold select high-yield bonds among investment-grade investors than in the last 10 years," he said.

Also, FRR's Mr. Rousseau said the pension fund is yet to require its managers to sell fallen angels as it allows them to hold up to 15% of high-yield bonds to accommodate downgrades. "We are making sure that portfolios in investment-grade mandates are not becoming too aggressive in terms of the duration and the spread doesn't exceed 150% vs. its benchmark," he said. FRR utilizes U.S. and European Bloomberg Barclays indexes as benchmarks for its portfolios.

But Mr. Rousseau added that if there are downgrades "all the way to single B," FRR's managers will become forced sellers. FRR invests about 50% of its assets in euro-denominated and dollar-denominated investment-grade corporate bonds.

"We recommend that people buy and maintain portfolios but give the manager the freedom not to be a forced seller," she said. "Forced sellers lose out nearly every time."

"It's very difficult in times of stress to change a passive mandate that has already been selected," she said.

Jens Vanbrabant, senior portfolio manager and head of high yield for Wells Fargo Asset Management's credit European team in London, said there could be more risks with further downgrades. Investment-grade clients can hold on to BB-rated bonds if they have flexibility, he said, but when the bonds become single B it is harder to explain the investment to these clients.

"We have been through downgrade cycles before in the previous financial crises and when entire sectors get downgraded into high yield there are opportunities to get hold of good investment-grade names at high-yield multiples," said Tina Ronnholm, portfolio manager at the external partnerships and innovation unit of AP1, Stockholm. AP1 had 365.8 billion Swedish kronor ($39.2 billion) in assets as of Dec. 31.

But she said: "It is very important to do a fundamental credit underwriting as not all companies will come through on the other side. You do want to buy into the fallen angels and not the falling knives."

"We are looking at the fallen angels as an opportunity in our high-yield portfolio and we have been able to benefit from these already," she said, declining to provide further details. AP1 has invested 33% of its assets in investment-grade bonds and 3% in high-yield debt. The proportion of corporate bonds was not disclosed.

Ms. Ronnholm noted that the coronavirus crisis is different from the global financial crisis a decade ago because companies are protecting cash flows to be able to meet obligations. "There is a more widespread willingness to take protective measures from the companies in the form of cutting dividends or slashing capex," she said.

However, Ms. Farquhar thinks the Fed has taken away the big opportunity to hold the fallen angels; historically, downgraded names outperform the high-yield market by between 5% and 10% in the following 12 months.