Eurozone long-dated government bonds are currently showing more promise to fixed-income investors and money managers than U.S. Treasuries even though the European Central Bank is dialing down its pandemic emergency purchase program.

That's because investors with global bond portfolios are expecting that U.S. growth will return to pre-pandemic levels sooner than in Europe, resulting in the Federal Reserve ending its quantitative easing program as early as next year and hiking interest rates. Conversely, the ECB's governing council's decision on Sept. 9 to "moderately" reduce its pandemic asset purchases is foreshadowing that any rate increases in Europe would not materialize for a few years.

Due to this prospect, investors and managers are favoring long-dated eurozone bonds in their fixed-income portfolios and are underweight long-dated U.S. Treasuries. They anticipate eurozone bond yields, which have been trending higher this year, will grow less sharply than their U.S. counterparts in the next months.

"There is still a divergence between the ECB and the U.S. Fed, which is close to starting to normalize its policy," said Ann-Katrin Petersen, Frankfurt-based vice president and investment strategist at Allianz Global Investors, in a telephone interview. "And this divergence will become even more pronounced in the months to come," she added.

Following the latest ECB meeting, sources agreed that the central bank is likely to continue to carry out its asset purchases because the inflation outlook in Europe is subdued. The fact that the ECB is expected to decrease the weekly purchases of the pandemic emergency purchase program, known as PEPP, to about €15 billion ($17.8 billion) from €18 billion is providing reassurance about accommodative conditions remaining in place for the longer in Europe, sources added.

Reacting to this divergence in the policies of the two central banks, executives at money management firms and investors are currently preferring eurozone government bonds over U.S. Treasuries.

Iain Stealey, managing director and international CIO for fixed income at J.P. Morgan Asset Management in London, said in a telephone interview that when it comes to sovereign bonds, the firm's preference is to be underweight the U.S. and the U.K. relative to Germany.

"While we expect to see a reduction in the European Central Bank's purchase program, we don't expect the ECB to tighten policy just yet. Unlike the U.S. and U.K., where inflation has been generated, the ECB doesn't yet have an environment suited to tightening," he said.

Bond yields on the move
Investors are increasingly favoring the yield prospects on European 10-year bonds over U.S. Treasuries. 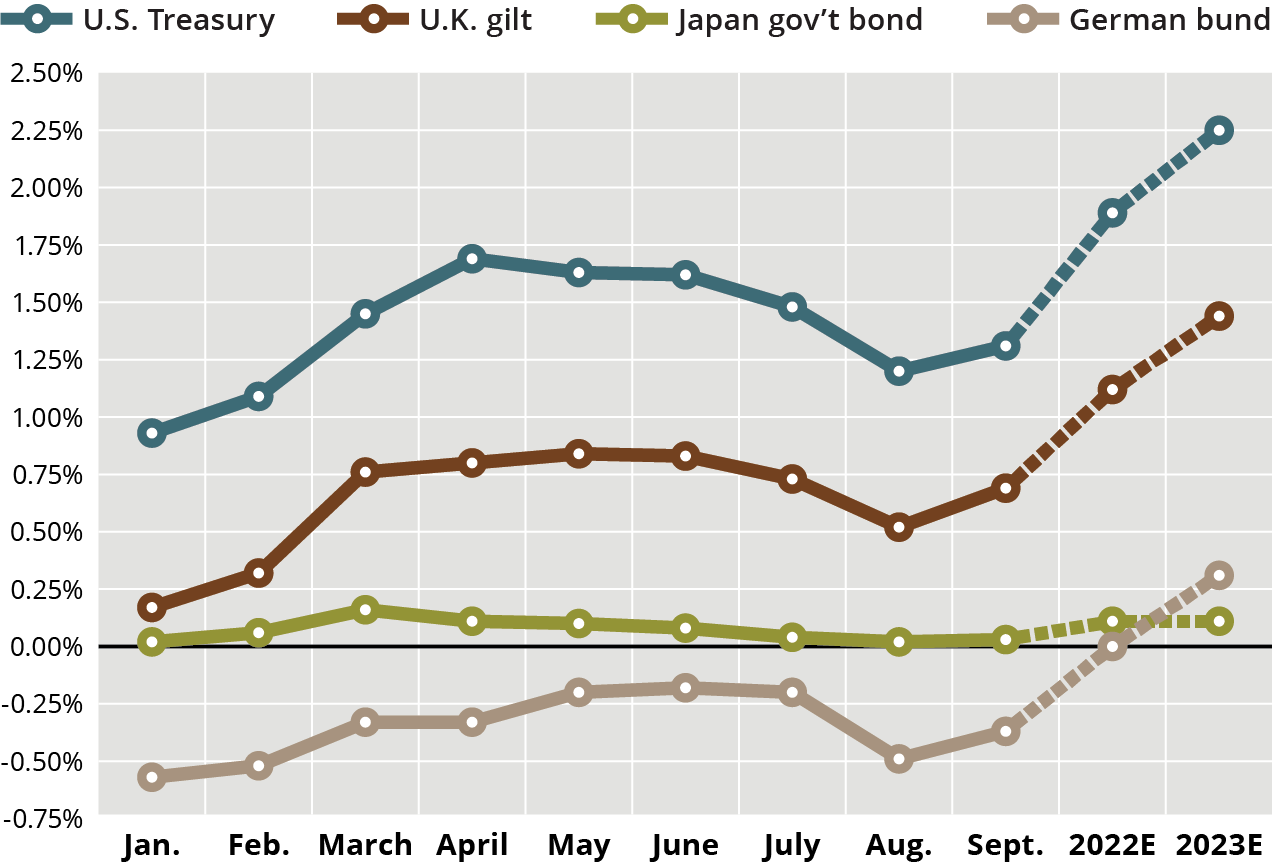 The firm maintains this position for the bulk of its strategies with assets under management of $742 billion across the global fixed-income, currency and commodity group.

"Our rationale for being underweight core bonds is that we think the Fed and Bank of England will stop QE sooner, then move onto hiking rates," he added, noting that the U.S. was better able to generate inflation than Europe in the years that followed the global financial crisis. That, he said, will allow U.S. central bankers to tighten monetary policy.

Allianz's Ms. Petersen added that it is more difficult for the ECB to justify more months of significantly higher bond buying compared to the first quarter of 2021. "It could be the first signal that the PEPP won't be extended beyond March 2022," she said.

But because the ECB is expected to continue its other asset purchases programs, Ms. Petersen added that even if ECB stops bond buying under PEPP at the end of the first quarter, a rate hike is not in the cards for a few years.

"We currently have a preference of bunds over U.S. Treasuries because we expect U.S. Treasury yields to increase more sharply compared to bunds," she said.

Due to the potential for U.S. Treasury yields to grow in the next months, some firms are also shorting U.S. Treasuries relative to eurozone bonds.

"We have been positioned to benefit from short-duration portfolio, but we also have a relative value position on the rates side, which are long euro and also short the U.S.," said Sabrina Jacobs, senior investment specialist at Insight Investment Management in London.

Other sources added that the ECB will not drop its asset purchase program entirely because of the diminishing bond supply in the eurozone.

Sandor Steverink, Amsterdam-based head of treasuries and inflation-linked debt at APG Asset Management, the in-house manager of the €523 billion ABP, Heerlen, Netherlands, said: "If we look forward … in the last quarter of this year, we are expecting a lot less bond supply, especially from governments. The numbers are showing higher inflation and better growth numbers but also COVID infection rate is still going up, so the ECB is cautious."

"On government bonds, we take a supply into account," he said adding that the economy needed less support than expected in the beginning of the year.

Mr. Steverink also thinks that government bonds are a more "positive story" than corporate bonds because of lower supply.

"Also, we think that bonds in Europe will give better protection than U.S. Treasuries, when considering tapering in the U.S.," he added. That is because of various stimulus programs introduced by U.S. President Joe Biden. "It will lead to more expenditure and continuation of more supply on the long-end (of the curve). Therefore, if we have to be at the long end, it is European government bonds," he added. ABP has 10.3% of its assets invested in long-dated government bonds and 9.2% in other government bonds.

"Chances that interest rates are going to rise (in Europe) are limited, whereas in the U.S. chances are that rates can rise next year," he said. The near-term inflation outlook in the U.S. is uncertain, which could lead to a risk of faster moves from the Fed, he added.

J.P. Morgan warns boom for bitcoin futures ETFs may come at a cost