The power of portfolio flexibility and why it’s so important today
Skip to main content
February 24, 2020 01:00 AM

The equity opportunity set for emerging markets has changed dramatically over the past three decades, but institutional investors have generally not put those changes to good use in their portfolios.

Whether seeking to increase funded status, meet return targets or improve portfolio diversification, institutional investors need to be risk aware when investing in international and emerging market strategies. Yet traditional approaches to risk management can be limiting.

Jeff Feng, senior portfolio manager and co-lead portfolio manager of the Invesco International Select Equity Strategy, used the example of a retail consumer to illustrate the point about the trouble with constraints.

Feng said a consumer who is free to purchase from any retailer without restriction can make more informed choices — and likely better purchases in terms of price, quality and overall value — than one who must spread purchases across, for example, 50 retailers, must restrict purchases from retailers headquartered in certain countries or make purchases only from retailers with a minimum of $1 billion in annual sales. “Applying the same logic to investment management suggests that greater selection choice combined with effective security research can offer a more favorable position to generate excess returns,” he explained.

Limitations of a constrained approach
What’s more, institutional investors can develop a false sense of security with a portfolio that has conventional constraints. Country constraints, for example, usually categorize companies based on the location of their senior managements or the exchanges they are listed on. But Feng said that where a business derives its underlying revenue is much more indicative of its risk profile.

Similarly, sector limitations can be problematic given the somewhat blurred nature of industry classifications. Feng said that beyond energy, materials and financials, few businesses fit neatly into a sector in which constituents are consistently more highly correlated within than outside the segment. He also noted challenges such as when S&P Dow Jones Indices and MSCI shifted several prominent companies from the technology sector to a newly renamed communications services sector, which had been called telecommunications services.

“Are Netflix, Facebook, TripAdvisor and Google more closely correlated with traditional communication stalwarts like AT&T and Verizon?” he asked. Truly understanding how a company generates revenues and its underlying business prospects are much more insightful into risk exposures then what may be an arbitrary, and at times even potentially misleading, classification.

That’s why Feng and his fellow portfolio manager on the Invesco International Select Equity Strategy focus on businesses and their fundamentals and pay less attention to sectors, regions and size.

“In our view, having the discipline to focus on buying great businesses at a discount to intrinsic value, even if the market seems to be moving against you short term, is how you put the odds of consistent investment success in your favor,” he said. “Factor macro events into your analysis, but don’t let any potential noise distract you from investing in great businesses. No one can really predict the outcome of volatile issues such as trade wars or Brexit.”

The International Select Equity Strategy has no limitations on geographic, sector or market capitalization allocations except for a 30% cap on emerging market exposure.

“We try to avoid constraints that limit alpha generation but do not create the diversity that is intended,” Feng said. “A good example is country constraints. We focus on where the revenue is being generated rather than the domicile of a business. We believe that by truly understanding the business drivers and geographic distribution of revenues, even a concentrated portfolio can be diverse.” 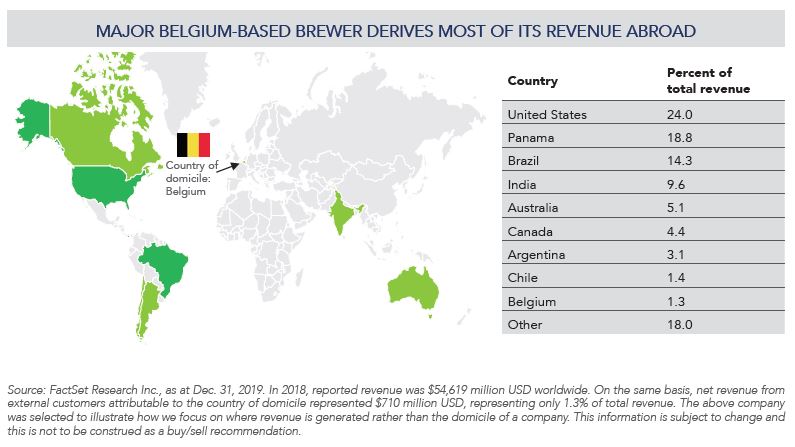 The strategy typically holds between 30 and 45 positions, with the belief that a concentrated portfolio allows the team to make fewer, better investment decisions.

“Owning fewer names allows us to intimately understand each company and maintain our conviction throughout periods of volatility,” Feng explained. “We are disciplined about selling positions when we identify a more attractive opportunity, there is downside risk from valuation, or our thesis is no longer intact.”

“We conduct thorough independent research, relying on proprietary information rather than Wall Street research,” Peden said. “We believe that significant outperformance comes from independent ideas rather than following the crowd.

“In addition to regular dialogue with the management teams that we invest in, we also speak to customers, competitors, suppliers and industry experts,” he said. “Our preference is to conduct on-the-ground research that includes one-on-one meetings with management, or on-site visits where we can assess a company’s operations firsthand.”

That research effort also includes combing through publicly available source documentation and publications covering competitors, customers, suppliers and other pertinent industry participants, Peden said, adding that the team’s ability to generate repeatable, long-term alpha is in no small part due to the fact that the team’s research leads it to different conclusions than the broader market.

The unconstrained approach can produce what Feng called “meaningful” portfolio shifts in sector, country and market capitalization over time, based on where the team’s research uncovers the greatest relative business and underlying growth value. The one real constraint is a limit of 30% in emerging markets. Without that restriction, the portfolio could, at times, become an emerging markets mandate.

First, a surge of assets into large-cap passive strategies has likely helped fuel recent growing performance divergence between large- and small-cap stocks. Feng pointed to an increase in sales flows to the top international exchange-traded funds, which are predominantly composed of large- and mid-cap stocks. Because smaller-cap companies comprise a small percentage of most international stock indexes, these flows have had a much greater impact on the valuations of larger-cap company share prices.

In addition, some strategies might not own small-cap companies that are index constituents because full index replication is often inefficient and uneconomical, particularly for smaller, less liquid stocks.

Second, larger companies typically have greater Wall Street brokerage analyst coverage, which leads to greater interest in those company stocks. Feng said that more brokers are producing frequent and extensive research on larger, more actively traded companies and that research garners greater commission revenues. They thus produce sparse, if any, coverage on smaller and more illiquid companies that may be less profitable for them to cover.

Once again, Feng has an illustration to make the point. After examining the number of analysts covering each company in the Invesco International Select Equity Strategy, Feng and his team found, not surprisingly, that larger-cap companies received significantly greater — just over double, on average — analyst coverage than small companies. The three smallest companies in the portfolio were covered by a mere four analysts, on average, most of whom were employed by small regional brokerages.

Bias Working
Peden explained how this bias has worked in the portfolio’s favor.

“We’ve been finding opportunities in less widely followed businesses that are off-benchmark or aren’t major components of the index,” he said. “Regionally, we have found several businesses in the U.K. that were indiscriminately sold off because of Brexit concerns. Although these businesses are domiciled in the U.K., they obtain most of their revenues globally.”

He added that the team has identified investment opportunities in Chinese domestic consumer-related industries as a result of tariff disputes depressing valuations. While the trade agreement signed in January between China and the U.S. eased investors’ concerns, it could still prove difficult to enforce and be potentially problematic.

“We believe the businesses we own will have strong demand for their products and services over the long term,” Peden said. “Any short-term weaknesses provide opportunities to buy more of the high-quality companies we own or new businesses trading at significant discounts to intrinsic value.”

“Over the past two years, our highly flexible portfolio approach combined with our independent research led us to double small-cap exposure in our international strategy, exploiting extensive broker coverage of larger, more liquid companies and strong flows into passive vehicles,” he said. “We have already begun to see the benefits of this positioning, as the market has begun to recognize the merits of many of our small-cap company holdings. Without the burden of excessive constraints, we are often able to buy into investment ideas at earlier stages and at more reasonable valuations, while passive vehicles and investors reliant on broker research and/or operating under constraints may be forced to buy at much higher valuations and at a later stage in the growth trajectory.”

The Invesco International Select Equity Strategy is tracked against the MSCI ACWI Ex USA index, which includes large and mid-cap companies across 22 developed markets, excluding the United States, and 26 emerging market countries. It captures about 85% of the global public equity universe outside the U.S.

This document is intended only for Institutional Investors in the US. It is not intended for and should not be distributed to, or relied upon, by the public.
This is for informational purposes only, is not to be construed as an offer to buy or sell any financial instruments, and should not be relied upon as the sole factor in an investment-making decision. This document contains general information only and does not take into account individual objectives, taxation position or financial needs. This does not constitute a recommendation of any investment strategy for a particular investor. As with all investments, there are associated inherent risks. Investors should consult a financial professional before making any investment decisions if they are uncertain whether an investment is suitable for them. The opinions expressed herein are based on current market conditions and are subject to change without notice. These opinions may differ from those of other Invesco investment professionals. All data as of February 1, 2020 unless stated otherwise.
Invesco Advisers, Inc. is an investment adviser that provides investment advisory services and does not sell securities. NA1727