Commentary: The time is ripe for public pension obligation bonds

It's finally now time for public pension funds and their sponsoring employers to make lemonade from lemons. The market value of public pension stock portfolios has shrunk dramatically in the shadows of the COVID-19 crisis, coupled with the recessionary impact of the Saudi-Russian oil price war. Stock indexes are down 35% or more from their peaks just earlier this year, in a dramatic sell-off.

As trustees and chief investment officers scramble to quell fears of stakeholders, and public finance officers watch their sales and income tax revenues plummet, liquidity and even solvency fears are resurfacing in some places. The potential inability of state and local governments to sustain their pension promises is once again making the news.

Before we start ringing the alarm about pension funding and pension deficits, it's now the time to revisit a worthwhile public finance strategy and instrument that may be able to come to the rescue of public employers. It works for both their underfunded pension funds as well as their often unfunded retiree medical benefits, known as other post-employment benefits, or OPEB. The pension obligation bond, and its more appropriate "benefits bond" cousin for OPEB plans, could never be more timely — and more vital to the future health of states and municipalities.

The basic pension obligation bond concept is relatively simple, and has been used for 45 years, albeit with sketchy results because of ill-advised timing. A state or municipality issues taxable POBs at low interest rates (now about 3% plus for a 30-year AA credit) and puts the money in trust to invest in capital markets at low, distressed levels. It's essentially an arbitrage strategy, to reduce the employer's cost of the pension fund by converting "soft debt" into "harder debt." In the long run, a stock index portfolio purchased at distressed low market levels can reasonably be expected to earn far more than the employer's POB interest rate. If done properly and timely, the net cost to taxpayers for funding the public pension plan will be dramatically lower. (Because it's sheerly capital markets arbitrage, Congress requires that the POB bonds be taxable, so that lower-cost tax-exempt bonds are used only for public purposes like infrastructure.)

In the last recession, both Milwaukee County and Contra Costa County issued POBs in a timely way, and showed us all how it is possible to underwrite a successful deal. Even with the latest market slump, they are both well "in the money" because even now stock indexes trade at three times what they did in late 2008.

The challenge, of course, is managing this clearly leveraged strategy. It's arguably like borrowing on a second mortgage to fund your IRA, which nobody in their right minds would do as individuals. But state and local governments are not individuals and they have the ability to be long-term, deep-pocket investors just like Warren Buffet of Berkshire Hathaway. They can buy straw hats in winter and hold them, if they act quickly.

I've done historical research on stock market and business cycles, economic recessions and expansions, for all bull and bear markets since World War II, and can attest that there is no business cycle in that history when the S&P index was off by more than 35% and it wasn't higher in two years, and returned high double digits over the following decade. The worst such period followed the 1973-74 bear market and ensuing stagflation period, but even then, equity investments acquired during what have been the "POB window" did admirably over a decade. 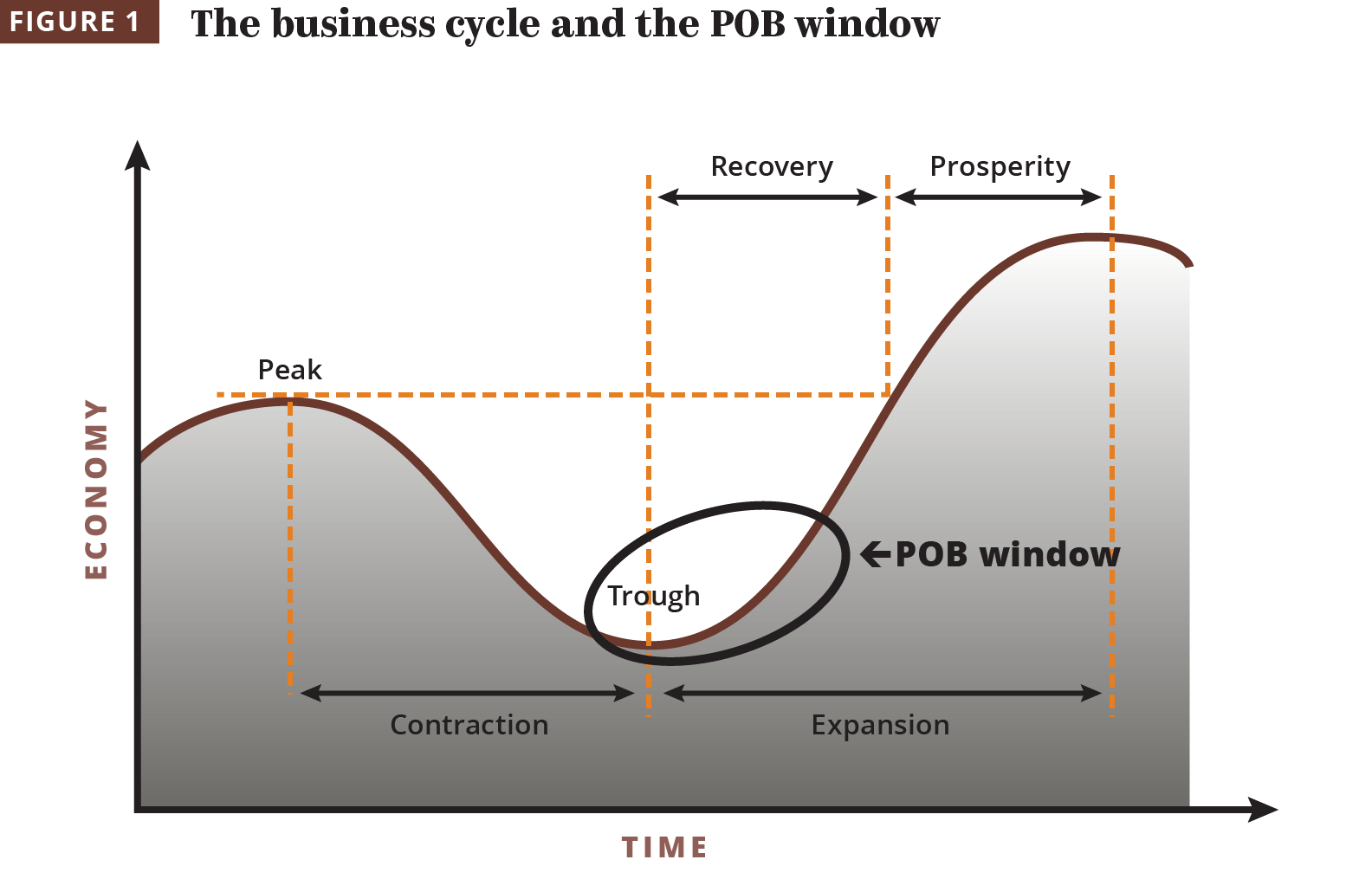 For years, the governmental finance community has seen poor judgment practiced by many of the previous issuers of POBs, who were typically finance officers lured by what they thought were attractively low interest rates without regard to the stage of the business cycle. Their professional association, the Government Finance Officers Association, has historically urged "extreme caution" in the use of this financial tool, and for good reason. POBs issued when the economy is going full steam invariably suffer huge market losses when the next recession hits. They bought too high. POBs only work well over market cycles if they are invested during the POB window.

I first urged issuance of POBs and benefits bonds back in 2008 during the global financial crisis, but then reported that the window had closed in the latter half of 2009. Since then, I have urged finance officers being pitched on this device by investment bankers to NOT issue POBs until the next recession. And that would be now.

POBs should not be invested like other employer contributions. It makes absolutely no sense to issue municipal bonds and invest 30% in other bonds, as most pension fund advisers would normally recommend. That completely misses the concept of pension obligation bonds' long-term capital markets arbitrage. So when sizing a deal, the borrowing should not exceed one-half or at most two-thirds of the pension system's unfunded liability on a current market value basis. Over time, the equity component should be reasonably expected to fill in the remaining gap without resulting in a later overfunding, which historically has invited bad actors to seek retroactive benefits increases and employer contribution holidays.

Last year, I proposed that Congress should authorize access to the U.S. Treasury's Federal Financing Bank borrowing window. Back then, my focus was on funding public infrastructure at the lowest possible cost to taxpayers. But in today's market and economic meltdown, it makes even more sense for the FFB window to be opened immediately to states to provide quick source of capital to make POBs and benefits bonds workable, at the very lowest interest costs.

A federal FFB window could easily cut the cost of borrowing for public employers by a full percentage point. The state and local government finance lobby — and the public pension community — should make themselves heard quickly in Congress, and at the White House and the Treasury, to open that window. Let's not let this crisis go to waste.

Girard Miller is a retired investment and public finance professional. He is the former CIO of the Orange County Employees Retirement System, Santa Ana, Calif., a former senior strategist for Public Financial Management and author of "Enlightened Public Finance." This content represents the views of the author. It was submitted and edited under Pensions & Investments guidelines, but is not a product of P&I's editorial team.