Commentary: A tale of two recoveries

The global recovery is underway, but it promises to become increasingly uneven across regions and countries, which holds important investment implications. The divergence between fiscal stimulus packages in the U.S. and Europe and the more decisive, supportive stance of the U.S. Federal Reserve compared to the European Central Bank stand out as especially significant.

U.S. President Joe Biden's administration has agreed in principle with Republican Senators on a $1.2 trillion infrastructure investment bill and is still pushing for an additional and similarly substantial spending plan on "human infrastructure." These plans come on the heels of the $1.9 trillion stimulus approved in March, which in turn followed approximately $3 trillion in 2020. This represents an extraordinary amount of stimulus for an economy which has already begun to roar back, compounded by an extremely loose monetary policy. The U.S. stimulus looks like overkill and might well have a bigger and more durable impact on inflation than the U.S. Federal Reserve hopes for.

There is no doubt, however, that it will give a strong short-term boost to growth.The European policy response pales by comparison and remains bedeviled by internal divisions. The European recovery package represents an important step toward regionwide fiscal stimulus, with €750 billion ($914 billion) almost equally split between loans and grants. But it is much smaller than its U.S. counterpart, and was only agreed upon after very contentious negotiations among eurozone member states. 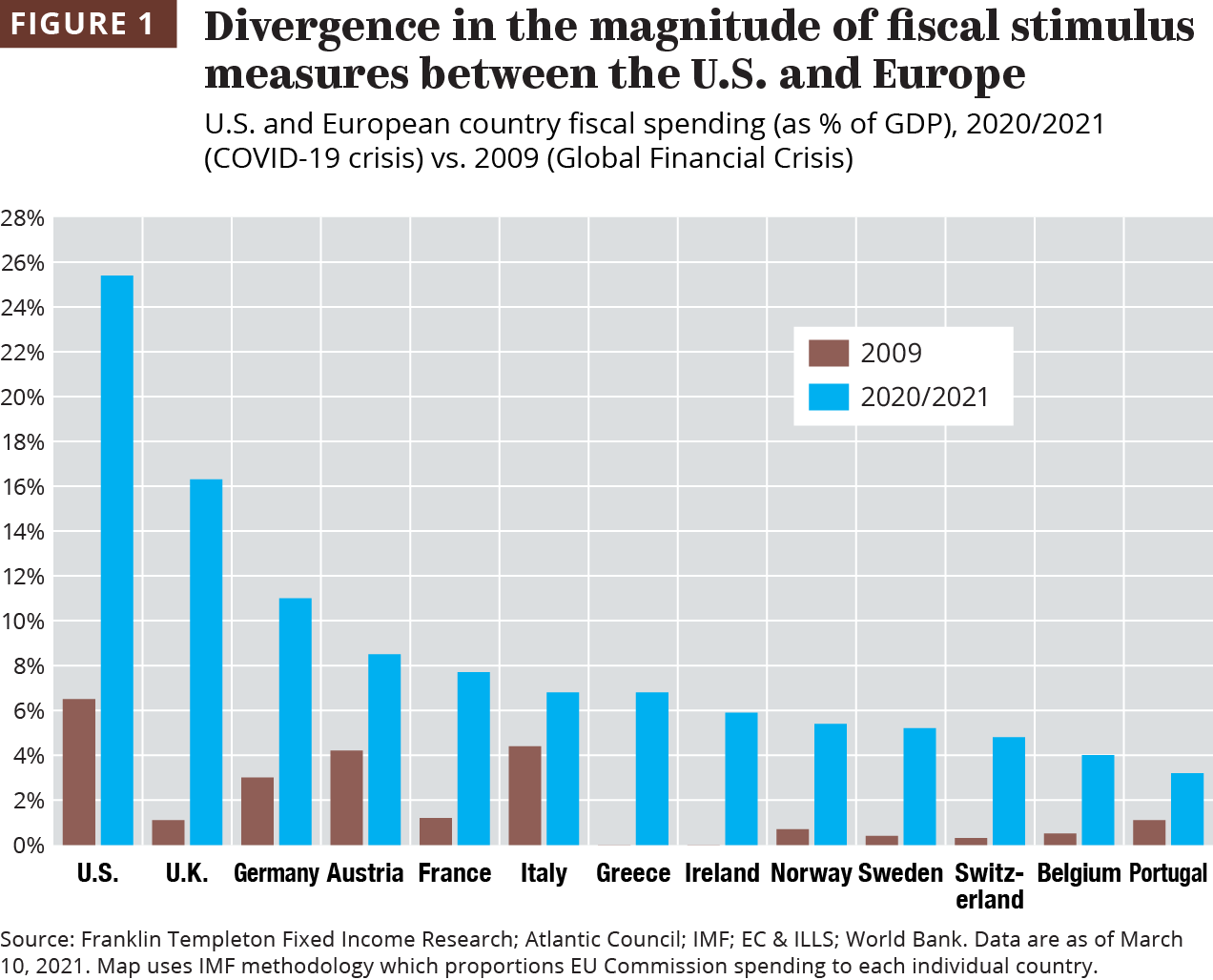 The U.S. Fed recently acknowledged that inflation risks are now tilted to the upside, but it has made it clear that it wants to see much more progress toward full employment, as well as evidence that inflation is set to run above its 2% target for some time before it considers unwinding its extraordinary stimulus.

ECB President Christine Lagarde has also insisted that withdrawing monetary stimulus would be premature at this stage, but internal divisions within the ECB's governing council play an important role and could undermine market confidence. Jens Weidmann, head of Germany's Bundesbank and a member of the ECB's governing council, warned publicly at the end of June that there are upside risks to inflation and that the central bank should stand ready to reduce stimulus as soon as the pandemic emergency has been overcome.

Much like the economic policy response, U.S. vaccination efforts have been faster and more decisive and effective than Europe's. By early May, 44% of the U.S. population had received at least one dose, compared to only 23% in Europe.

As of early July, the U.S. share had risen to 54% and Europe was still lagging behind at 42% (though Germany and Italy had caught up with the U.S.).

As a consequence, U.S. states were able to start reopening their economies this spring, while EU countries were tightening their lockdowns yet again to bring another wave of contagion under control. EU countries have more recently begun to ease restrictions, but this delay in normalization together with the smaller fiscal support will inevitably result in a later and weaker EU recovery. The surge in cases of the COVID-19 Delta variant, meanwhile, has caused a delay in the U.K.'s reopening plans and triggered some new travel restrictions in Europe; while several EU countries have been reluctant to hinder the summer tourist season, there is a risk that some activity restrictions might be imposed anew in the fall when the traditional flu season will also raise the baseline pressure on health-care systems. 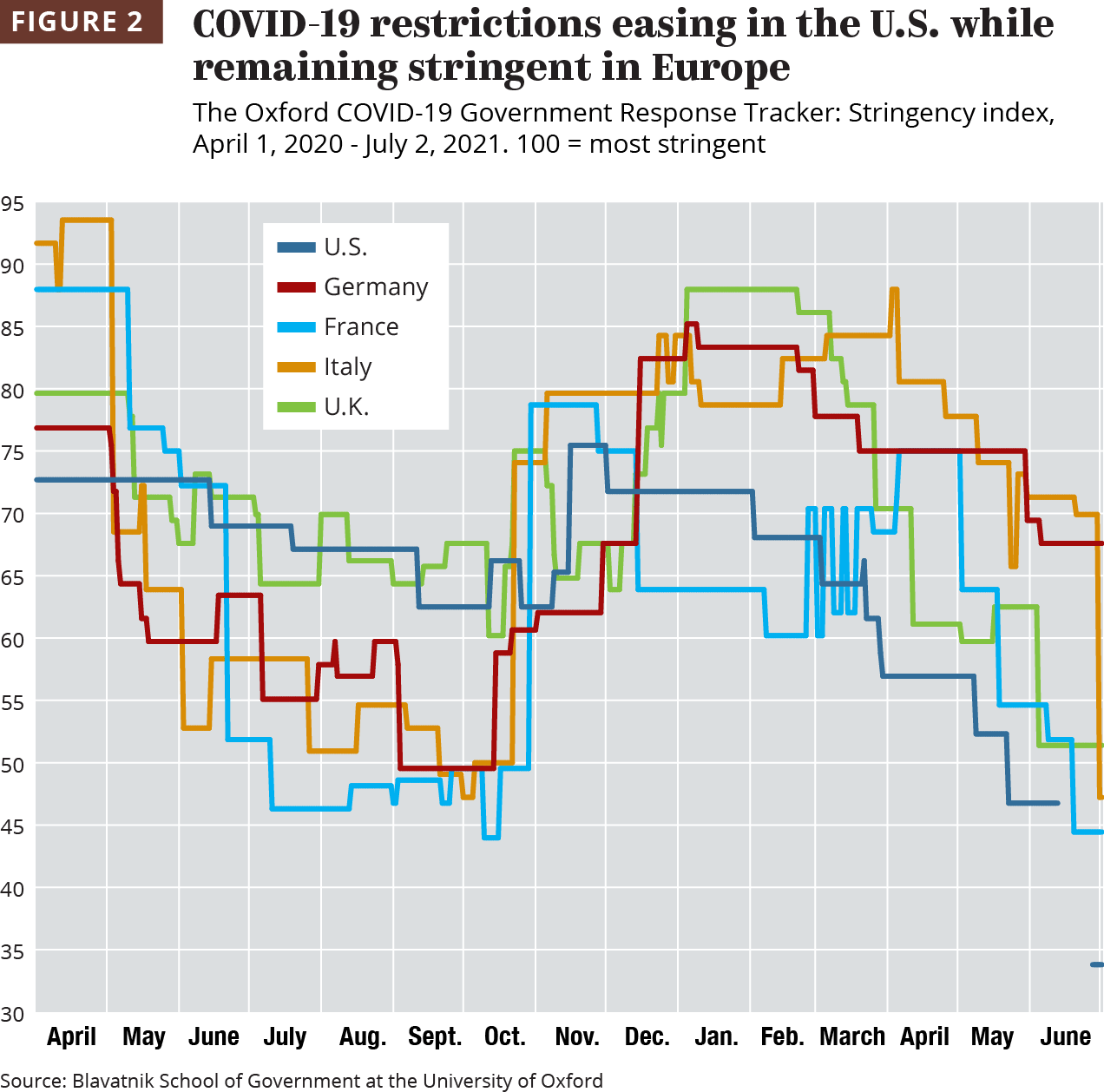 Overall, therefore, while the European economy has recently picked up faster than expected, it remains exposed to significant downside risks; moreover, much stronger fiscal stimulus, earlier vaccination progress and a more reliable supportive stance by the Fed imply that the U.S. recovery is likely to significantly outpace Europe's.

These divergences have important implications for investment strategies and risk assessments. In the short term, there is less scope for inflation to pick up in the eurozone, given the delayed and less dynamic recovery — as confirmed by the recent inflation releases in the U.S. and the eurozone. The homegrown uplift to bond yields will be correspondingly weaker. This combination makes European fixed income less exposed to duration risk than U.S. fixed income, and more attractive at the margin; the slower normalization also suggests a cautious approach to the European corporate high-yield sectors more directly exposed to COVID-19 restrictions.

The ECB's less-convincing stance, meanwhile, flags an important tail risk. Eurozone yields will feel the pull of U.S. Treasury yields, particularly if the latter surprise to the upside on the back of a stronger-than-anticipated U.S. recovery. This might reawaken concerns on higher-debt periphery countries like Italy. Should government bond yields turn on an upward trajectory, these countries would face higher debt-servicing costs given their elevated debt levels; this fiscal pressure could raise their sovereign risk and cause the spreads of their government bonds to German bunds to widen. During the time of the eurozone debt crisis, then-ECB President Mario Draghi turned out to be the perfect person to meet the challenge head on. Mr. Draghi had both the domain expertise and the decisiveness to push the ECB to a very forceful stance, crystallized in the famous "whatever it takes" speech.

Current ECB President Lagarde, by contrast, has appeared much more concerned about building consensus and lacks the economics background of her predecessor. Both of these differences have been apparent in recent press conferences. A less-convincing, more divided ECB could find it a lot harder to allay market concerns. While we do not expect things to get as nerve-racking as in 2012, a bout of serious turbulence in eurozone government debt spreads is a tail risk worth monitoring.

A stronger U.S. rebound bodes well for emerging markets, especially when combined with the ongoing recovery in China and the fact that Asia overall has made significant progress in bringing COVID-19 infections under control and creating the conditions for normalization — with the unfortunate and notable exception of India.

The upswing in commodity prices shows that the global economic outlook is brightening, although supply constraints triggered by the COVID-19 crisis have also played a role. From an investment perspective, however, we have to weigh the improved macroeconomic outlook for emerging markets against the potential stress from higher U.S. Treasury yields. Higher U.S. bond yields would increase debt servicing costs for those emerging markets countries and corporates that have significant U.S. dollar-denominated debt; and it would make emerging markets bonds at the margin less attractive to foreign investors compared to U.S. bonds. Indeed, both hard currency and local currency emerging markets bonds have had a challenging start to 2021 as the reflation narrative pushed up benchmark U.S. yields. While U.S. bonds have taken a breather and stabilized in recent weeks, a strong U.S. recovery and highish inflation numbers have the potential to push them up again in coming months. Here, differentiation and security selection will be the name of the game. Emerging markets countries and companies that are better positioned to benefit from a pickup in global trade and less exposed to currency risk on the funding side should prove to be better bets. As ever, security selection will be key, and a successful investment strategy will require even more hard work than usual.

Another important factor to pay greater attention to is China's role as a direct investor and funding provider across emerging markets. As China balances economic and geopolitical considerations in its investment decisions, and in handling distress situation for its borrowers, understanding China's shifting priorities has become crucial for emerging markets investors.

Overall, we expect that the coming months and quarters will see a consolidation of a robust recovery in the U.S. and in the global economy at large, with Europe catching up as it proceeds with normalization. Together with vaccination programs, fiscal policy plays a key role in this recovery, notably in the U.S. Going forward, we believe markets will increasingly focus on whether this can be too much of a good thing — whether the massive fiscal stimulus, enabled by an extremely stimulative monetary stance, will cause the U.S. economy to overheat and inflation pressure to build beyond the central bank's expectations and desires. We do not expect inflation to get out of hand, but given that policymakers have now pulled out all stops, we suspect that managing their desired inflation rise will prove harder than they think and claim. This could easily bring heightened stress and volatility to financial markets where prolonged massive monetary easing has already contributed to stretched valuations across asset classes.

This content represents the views of the author. It was submitted and edited under Pensions & Investments guidelines but is not a product of P&I's editorial team.