Commentary: Is it time for an emerging markets rally?

For those investing globally, one recurring tendency has surfaced over the last few decades: During periods of U.S. dollar strength, American stocks significantly outperform those in emerging markets. But in a U.S. dollar bear cycle, the pattern reverses.

A typical U.S. dollar trend lasts around six to seven years — with the broad real dollar index posting an average change of more than 30% a cycle. As Figure 1 illustrates, we may be at the end of a long U.S. dollar 35% bull run that started in August 2011. Some suggest the greenback peaked in the summer of 2020 amid the COVID-19 spread and the world seeking safe havens. When examining cyclical and structural macro conditions that have underpinned U.S. dollar weakness since the 1970s, we may be amid an emerging markets rally not seen in nearly a decade. 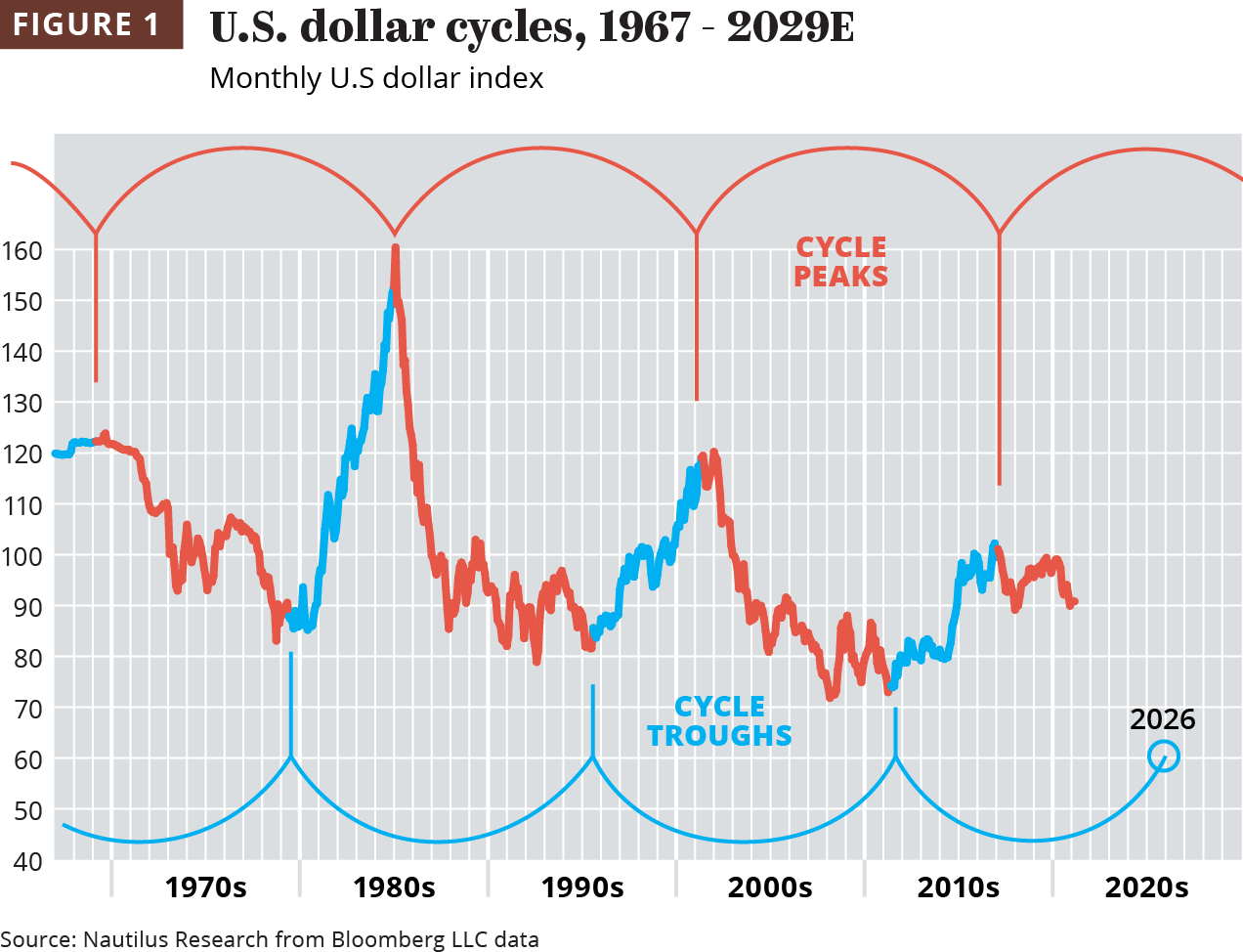 The EM-commodity-dollar connection and COVID-19 recovery

As Figure 2 outlines, this may be further accelerated as vaccines are rolled out and global trade recovers — largely driven by China, the world's fastest-growing large economy. 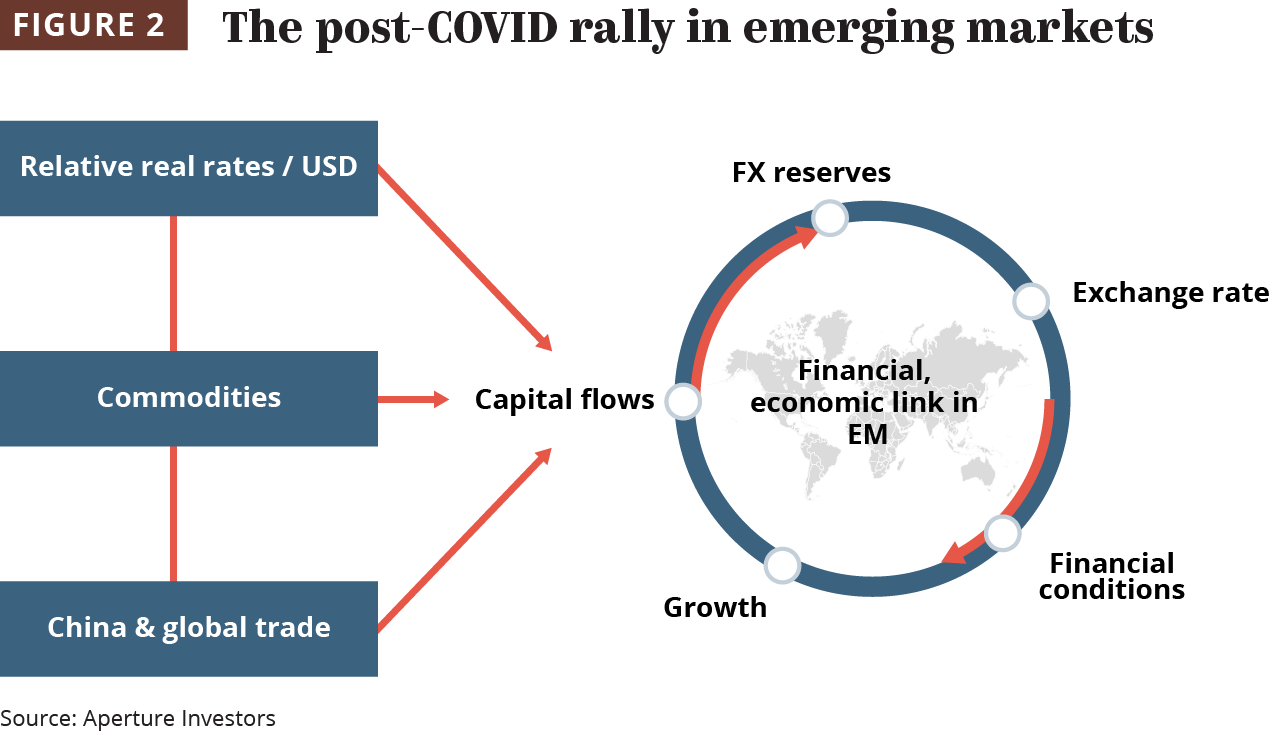 According to the IMF, several related factors help fuel the virtuous cycle and subsequent rallies, a combination of fundamental and technical factors.

Often, a sharp fall in U.S. interest rates relative to other currencies makes the U.S. dollar less attractive and creates "carry trade" opportunities around the world, allowing investors to go long (or switch to) a higher yielding currency and short (or sell) a lower yielding currency. Indeed, the Federal Reserve's ultra-low interest rate policy may continue through 2022. This creates a pendulum shift for investors: after years of U.S. equity outperformance, capital flows reverse back to Asia, Africa, Latin America, Middle East and former Soviet Union markets.

What happens to stock prices during these long cycles? Interestingly, the S&P 500 rose 236% vs. only 30.5% for MSCI Emerging Markets index from 2010-2020, setting up for a possible tilt back to emerging markets. Not surprisingly, this latest S&P outperformance came during a U.S. dollar strength cycle. But the previous decade differed — after numerous EM currency crises subsided by 1998, the MSCI Emerging Markets index crushed the S&P 500, rising 230% while the S&P 500 fell 9.28% from 1999 until 2010 — almost a complete flip.

J.P. Morgan's private bank recently noted that as the U.S. dollar falls it favors Northeast Asian markets like China, South Korea and Taiwan, which are leveraged to global trade, but also value/cyclical economies such as Hong Kong, Singapore, India, Brazil and Russia. For those that play foreign-exchange markets, a weaker U.S. dollar tends to draw carry traders to high-yielding emerging markets currencies, and J.P. Morgan suggests the Mexican peso, Chinese yuan and Russian ruble in the current environment.

Will history repeat itself?

Though the preconditions do seem similar, there are many unknowns in the current pandemic environment. One is the ability of emerging market economies to recover quickly. Though Asia recorded lower levels of COVID-19 sickness and fatalities, the region has been hit hard economically. With the exception of China, most other EM countries saw GDP contract in 2020. But as vaccines gain momentum in late 2021 and 2022, pent-up global demand and trade should recover. There's already evidence: December 2020 data showed the Chinese monthly trade surplus hitting a record $80 billion globally, nearly half of that with America — even as the 2018 Trump trade tariffs remain in place.

Another wild card may be U.S. interest rates relative to other markets worldwide. Though the Fed is expected to keep short-term rates near zero through 2022, dozens of emerging markets central banks have also dropped rates to record lows. Just in the last few weeks bond hawks have demanded higher longer-term U.S. rates, thereby steepening the yield curve and making the greenback more attractive. A good sign of the dollar weakness cycle would be seeing EM rate hikes with a steady U.S. yield curve. Both of these will depend on how fast economies recover which, again, is tied to vaccine rollouts and the end of the pandemic.

In terms of a new resurgence in commodities, oil's influence in this cycle may be different. For much of the last 50 years, America's persistent crude imports resulted in U.S. dollars flooding the world. But things have changed a lot since the global financial crisis. According to the Energy Information Agency, the U.S. has boosted domestic oil production to nearly 11 million barrels a day at year-end 2020 from about 5 million a day in 2007. Moreover, there have been peak months of more than 13 million barrels produced when the U.S. was actually a net exporter. American oil exports in a global recovery could actually reduce the U.S. trade deficit.

Finally, geopolitics and unforeseen crises could spark a flight to safety. Flare-ups in Iran, North Korea, the Taiwan Strait or South Seas all could create a run to the U.S. dollar.

Fundamentals suggest this multiyear U.S. bear cycle might have begun, ending the long bear cycle in emerging markets. Though investors may not have caught the COVID-19 lows of last March, it might not be too late to jump in if the multiyear cycle repeats itself.

Peter Marber, New York, is portfolio manager, CIO of New World Opportunities Fund and head of emerging markets at Aperture Investors LLC. This content represents the views of the author. It was submitted and edited under Pensions & Investments guidelines but is not a product of P&I's editorial team.