Trustees of public employee pension funds in the U.S. have their work cut out for them. The funds they oversee spend an average of 1.3% of asset value annually on active investment management, by my estimate. Costs have risen steadily and dramatically in recent decades. Collectively, the funds have underperformed passive investment over the last 12 years by an average of 1.55% a year (the passive benchmark comprises 72% globally diversified stocks — 59% Russell 3000 and 13% MSCI ACWI ex-U.S. — and 28% Bloomberg Barclays U.S. Aggregate bonds). On $4.5 trillion of public fund assets in the U.S., that shortfall amounts to a waste of nearly $70 billion a year that taxpayers will have to make up in the years ahead. Most public fund trustees will find these facts discomfiting. They should.

Yale University and other large endowments achieved spectacular gains from the early 1990s through the late 2000s, establishing the precedent for the so-called endowment model of investing. The gains came primarily from the addition of alternative investments (e.g., private equity, hedge funds and real estate) to their portfolios. Public pension funds began adopting the endowment model in earnest about 20 years ago. Central to the endowment model is a multiasset-class framework for diversification. It is based on the theory that "uncorrelated" asset class returns will improve risk-adjusted performance through more efficient diversification than might be achieved via stocks and bonds alone. Alternative investments, or alts, came to feature prominently among the asset classes. For large endowments, the allocation to alts is now 60% of total assets. The figure for public pension funds exceeds 30%. As the number of asset classes expanded, so did the number of actively managed investment portfolios. Large endowments use more than 100 active managers, on average. Large public pension funds use more than 150 active managers, on average. This is the look of public fund investing today: many asset classes, 30% or more of assets in alts and scores of active managers.

Endowment-model gains dried up about the time of the global financial crisis of 2008. Why? Alternative investment markets began to evolve dramatically in the 1990s. The impetus was the flood of money pouring into private markets and hedge funds then. For example, between 1995 and 2018, the value of publicly traded real estate investment trusts in the U.S. grew twenty-fivefold, from $50 billion to $1.25 trillion, with private market real estate investing giving way to public. Hedge fund assets under management increased twenty-sevenfold between 1997 and 2018. Private equity assets under management increased thirty-sevenfold between 1994 and 2019. As a result, pricing in all three markets became better aligned with public market pricing. An indication of this is the elevated correlation of alts and public equities. The correlation coefficient between the alts mentioned above and U.S. stocks now averages nearly 0.9, a very high figure.

Exhibit 1 Relationship of public fund returns and those of a stock-bond benchmark
12 years ended June 30, 2020 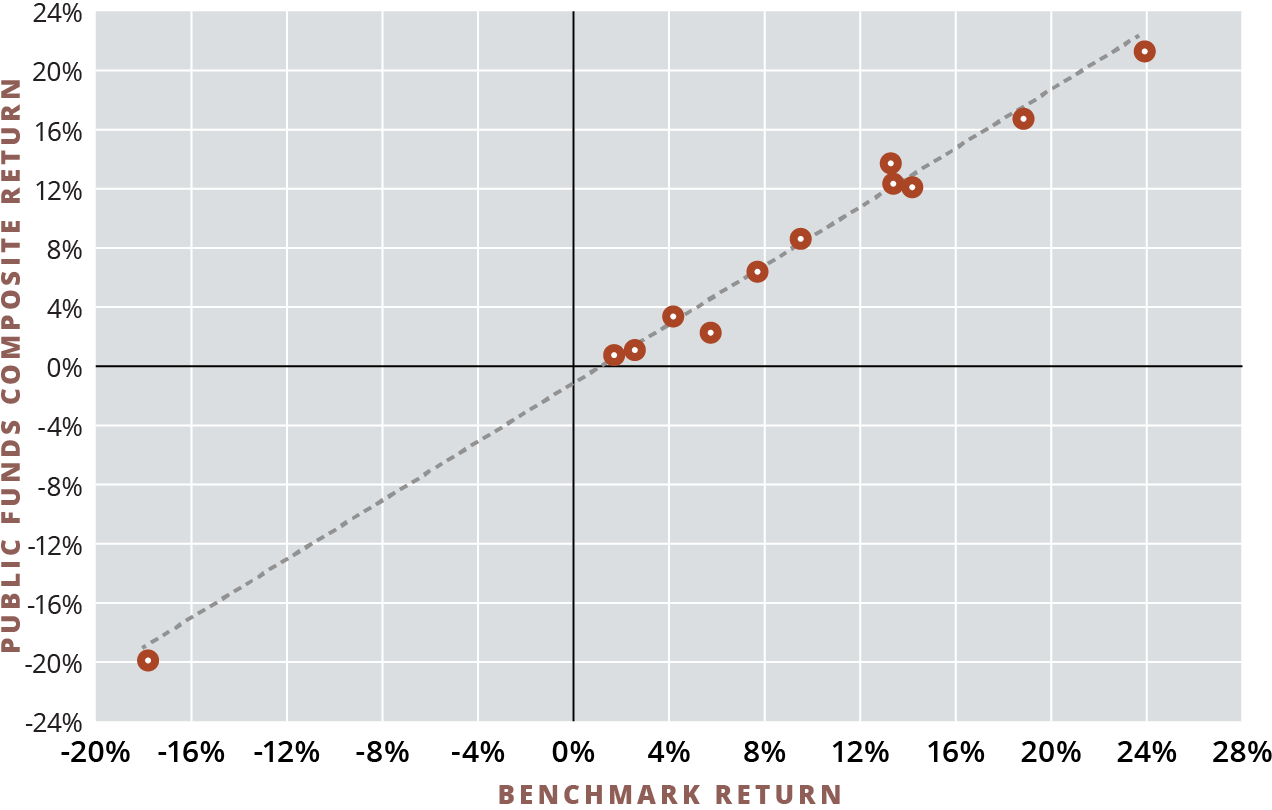 Market evolution has had important implications for institutional investors. First, alternative asset classes ceased to be the diversifiers they had been perceived to be. The regression diagram above (Exhibit 1) shows the relationship of returns for a composite of 46 large public funds with the benchmark described above (72% globally diversified stocks and 28% Bloomberg Barclays U.S. Aggregate bonds). Nearly 99% of the return variability of the fund composite is explained statistically by a benchmark comprising just stocks and bonds. This tells us that the diversification pattern resulting from allocating to numerous asset classes, including in large measure to alternative assets, is no better than that which can be obtained with a few stock and bond index funds alone. In other words, alts have become superfluous as diversifiers.

Second, in the wake of the global financial crisis, alternatives ceased to be a source of risk-adjusted return, sometimes called alpha. They became instead a drag on performance. Exhibit 2 shows the alpha for three types of alternative investments beginning in 2009. The return series for each asset class is regressed on a passive benchmark, as described in the table. (The methodology is the same as employed in the diagram above.) The alpha, which is the intercept of the regression, is the margin of observed underperformance, and R2 is a measure of goodness of fit between the asset class returns and those of its benchmark. There is no combination of market indexes that provides a better statistical fit than the one indicated for each benchmark.

One result of the market evolution described above is that the performance of public pension funds, with their heavy commitment to alts, has suffered. The 46-fund composite underperformed the passive benchmark mentioned above by an average of 1.55% per year for the 12 years ended June 30, 2020. The margin of underperformance exceeds slightly the funds' expenditures for investment management, which I estimate at 1.3% of asset value annually. Given the extensive diversification of public funds, this level of cost makes them very expensive closet index funds, virtually assured of underperforming passive investment in the future unless things change.

Public funds should explore simpler, more flexible approaches to asset allocation. This means gravitating away from asset class silos that impose rigidity with no assurance of benefit. As a result we can expect to see fewer, more comprehensive asset classes being employed as time goes by. As this happens, funds will cease to maintain de facto quotas for various types of expensive active investments, such as 15% in private equity or 10% in hedge funds. Alternative investing should and will become more selective, less wholesale. Large public funds now use an average of more than 150 actively managed portfolios, which is way too many for cost-effective diversification. Costs must come down. Passive investing will grow. This is the look of the future.

How trustees can help

Trustees of public pension funds are generally laypersons. They know institutional investing is complicated, so they rely on their investment staff and consultants for guidance. And yet the trustees are the ones ultimately responsible for the integrity and efficiency of the institutions they serve. So, given the complementary roles of trustees and staff, how can trustees help bring about constructive change? By asking the right questions. Here are a few:

Public pension funds in the U.S. can and should do better. Much is at stake. Their trustees can catalyze the change required to make it happen. But they have to know what they are looking for — and ask the right questions.

Richard M. Ennis is the co-founder of Ennis Knupp & Associates. Mr. Ennis and his wife, Sally, retired to Sanibel Island, Fla., upon the sale of his firm to Aon Corp. in 2010. This content represents the views of the author. It was submitted and edited under P&I guidelines but is not a product of P&I's editorial team.