Commentary: History can help when predicting the path for property

The outbreak of COVID-19 has quickly turned into a severe shock. The decline in economic output recorded in the first half of 2020 makes the fallout from the 2008 global financial crisis seem mild in comparison, while in real estate markets, transaction volume has slowed sharply and values are under pressure — notably in retail and hotels.

The highly uncertain nature of the current crisis — in which public health concerns and policy measures are intertwined with unprecedented economic and financial stresses — makes predicting its path a particularly difficult task.

There have been two major financial crises since the early 1990s — one contained in Asia in 1998 and one truly global and systemwide in the form of the global financial crisis — a long, drawn-out correction exacerbated by oversupply in the early 1990s and a temporary global demand shock in the aftermath of the dot-com-related financial market turmoil and U.S. recession in the early 2000s.

Despite obvious differences between the current situation and circumstances that influenced previous downturns, lessons can be drawn from history and certain observations can help make sense of events as they unfold.

Impact on markets can vary significantly

The global financial crisis led to a sharp correction and affected almost every market. A relatively swift recovery in values was led by both Asia-Pacific countries — which benefited from a strong structural growth story — and the U.S., where policymakers rapidly provided economic stimulus and real estate lenders quickly regrouped after the banking crisis in 2008. 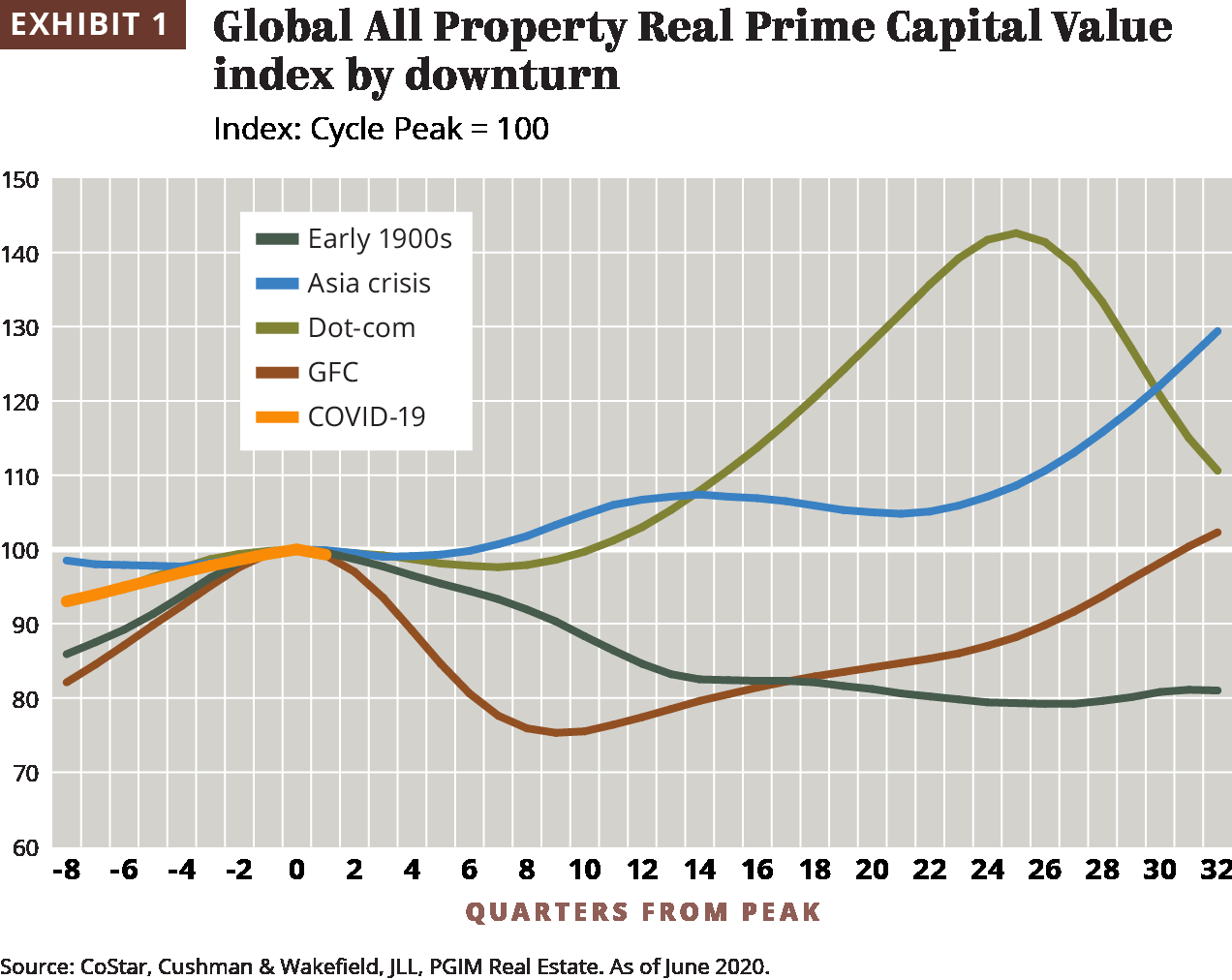 In contrast, the overhang from supply meant markets in Europe and the U.S. were stuck in the doldrums for much of the 1990s. The dot-com and Asia crises were ultimately contained events with limited contagion, affecting a much lower proportion of markets and sectors.

Clearly, the aggregate impact of a downturn is milder when contained to a limited set of markets — and also when correlations are low. A more diverse range of performance leading up to a crisis is consistent with a less widespread impact because markets are not simultaneously vulnerable to the same factors.

During both the early 1990s and the GFC, on a peak-to-trough basis, major regions and sectors were all similarly affected. However, even if correlations are elevated, market performance will vary, at least in such factors as magnitude of impact and timing. 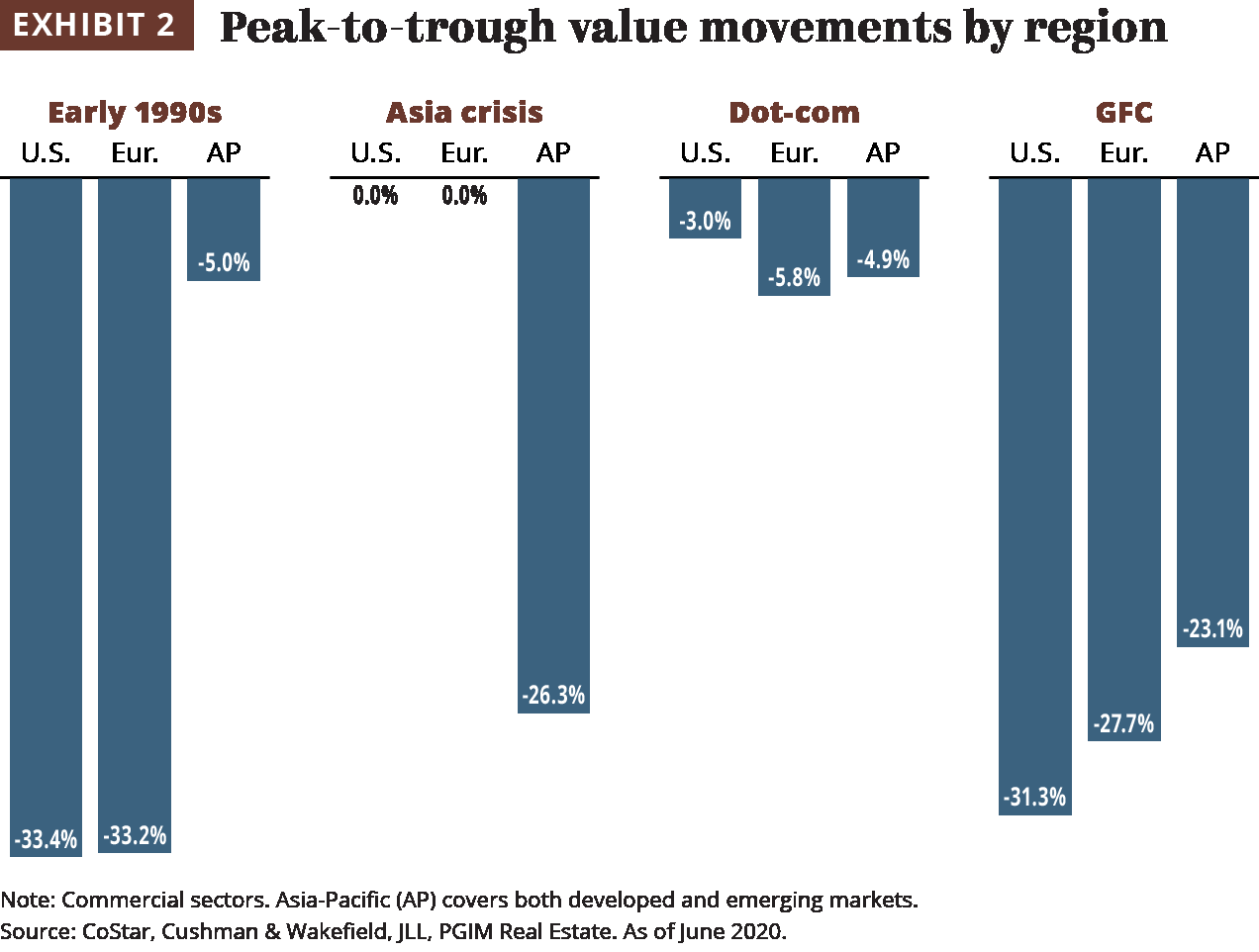 By looking more closely at individual markets, it is clear the key aspects of variation relate to the magnitude of the initial decline and how long it takes for a recovery to get underway.

A simple historical analysis shows most markets will report declining values, in real terms, for an average of about three years following a peak. However, while some markets are already reporting a strong bounce in values at that point, the bottom quartile are still reporting modestly declining real values five years later.

The most likely cause of a prolonged downturn is either sustained financial distress, as suffered in the eurozone periphery after the GFC, or an overhang of supply, which weighed on most major markets in Europe and the U.S. in the early 1990s.

After three years, more than 50% of markets are likely to still be recording negative quarterly real value growth, so building exposure to recovering sectors and markets can generate significant outperformance.

The severity of the economic impact of COVID-19 — and its knock-on effects on real estate tenants and owners — point toward the sharp correction during the GFC being a more appropriate historical comparison than are the milder examples.

One notable feature of the aftermath of the GFC was a lag in the recorded performance of real estate assets compared with wider equity markets. Equities fell by about a third in the second half of 2008 before staging a strong rebound in 2009. In contrast, the initial impact of the crisis on private real estate assets was modest but became much more severe in 2009.

This pattern reflects several factors, including natural lags in the valuation process, a lack of evidence for appraisers to accurately determine values when transaction volume slows and the time it takes for real estate cash flow — much of which is based on fixed-lease contracts — to adjust to weaker economic conditions.

All of those factors are present today. It is important to be alert to the fact real estate values can come under pressure — especially if the current severe recession starts to weigh on operating fundamentals, vacancy and income receipts.

Some causes for optimism?

The COVID-19-induced downturn looks set to be different again. The key variant is that as a health crisis, its cause is truly exogenous. In addition, several factors provide support for real estate performance that had seldom featured in past downturns — particularly at the start.

First, COVID-19 hit when interest rates were already low, meaning there was no lag between a drop in sentiment and policy reaction. Policy action has already been swifter, more sizable and better coordinated than during 2008-'09.

Second, use of leverage through the past cycle was low, meaning investors in general have a better capital buffer now than in the early stages of the GFC. Lenders have more breathing room on covenants for the time being, and there is still plenty of capital looking to find a home. 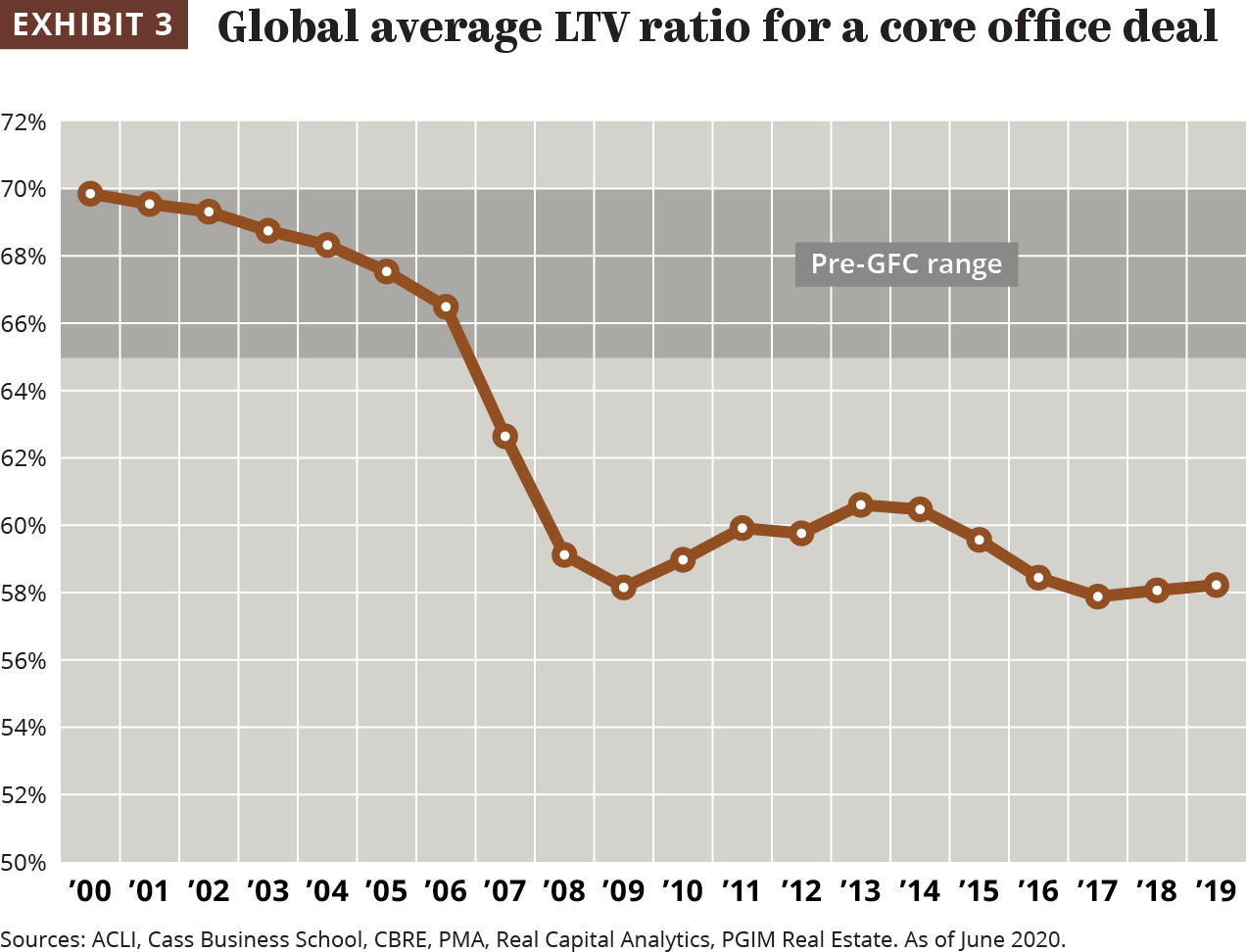 Third, supply growth is much more contained. Even in the top quartile of markets ranked by growth in stock, only 2% of stock is expected to be added each year compared with an average of 6% per year recorded ahead of previous downturns.

In the near term, vacancy looks certain to increase due to rising unemployment and the inevitable stress of recession, but it is reassuring the effects are not set to be exacerbated by a wave of new space.

The severity of the impact of COVID-19 on the global economy points to a widespread and significant effect on real estate. There is still much uncertainty as to how the current crisis will play out. However, analysis of past downturns facilitates assessment of the parameters for what comes next, helping investors navigate through today's challenging conditions.

Peter Hayes is global head of investment research at PGIM Real Estate, located in London. This content represents the views of the author. It was submitted and edited under Pensions & Investments guidelines, but is not a product of P&I's editorial team.

Commentary: The case for using real assets to hedge inflation