Many foreign investors for years have been discouraged from investing in the South Korean stock market despite its valuation discount vs. other equity markets. Significant changes, however, are underway in the country, that might help create attractive long-term investment returns for active managers.

The market's valuation discount, commonly referred to as the "Korea discount," has been widening, with the Korea Composite Stock Price index now trading at a price-to-book ratio of about 0.78 times, close to a 20-year low, as shown in Figure 1. These low valuations mask positive trends, including South Korea's strong businesses and corporate governance improvements, making it a potentially ideal time to buy into the market. 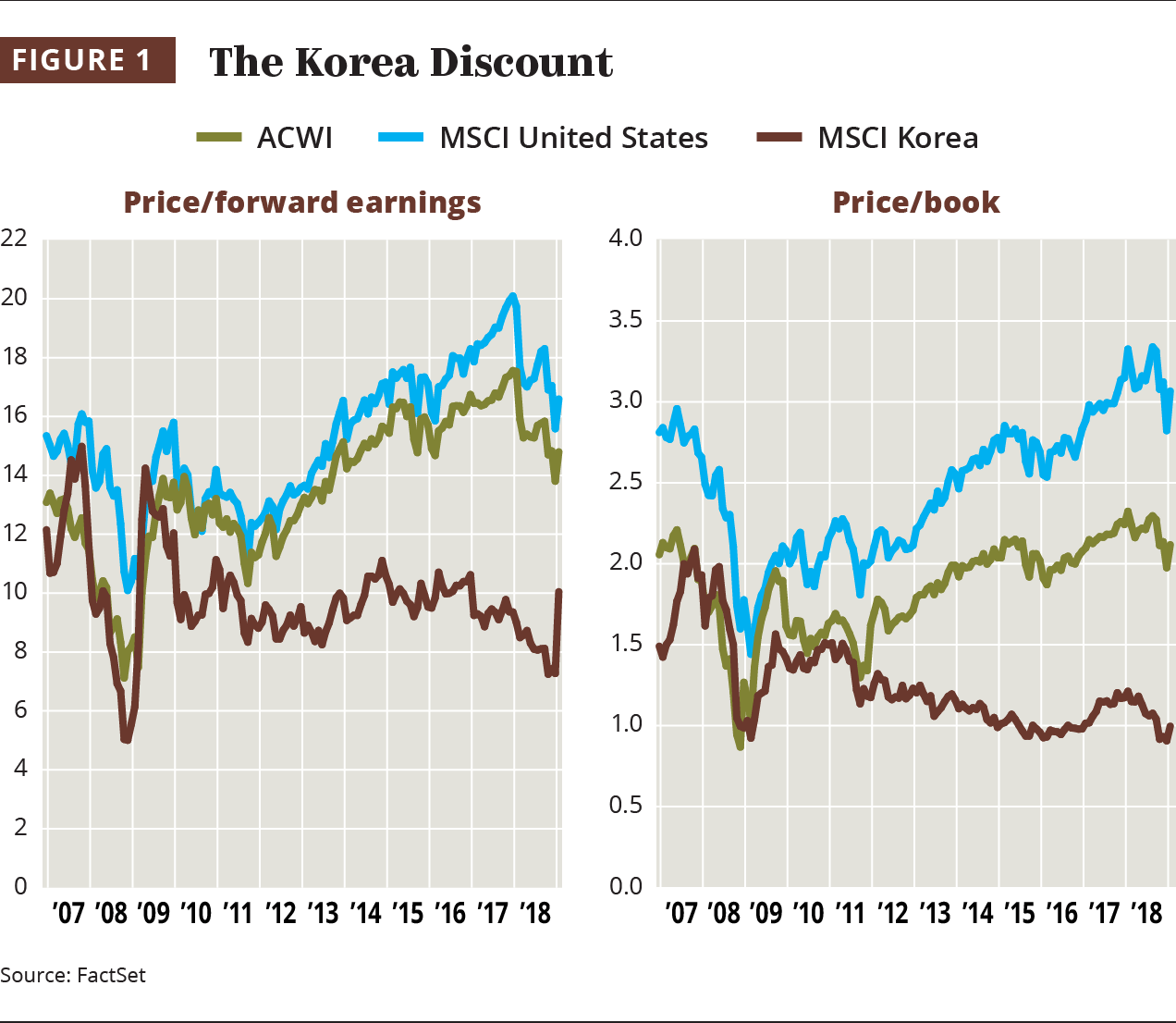 Recently, the South Korean economy has been relatively steady, and South Korean businesses have been performing well. The operating profit of large South Korean companies has increased cumulatively by 80% in the seven years ending 2018. South Korea's annual gross domestic product growth rate has been about 2% to 3%, and is projected to stay around that level. South Korea also boasts twin (fiscal and current account) surpluses and large foreign exchange reserves. It enjoys one of the lowest government-debt-to-GDP ratios globally, and its sovereign credit rating ranks 14 out of 35 in the Organization for Economic Cooperation and Development countries. While there likely will be some trade war impact, South Korea has the capacity to defend its economic health. On the innovation front, South Korea has been ranked first consecutively for the past six years by the Bloomberg Innovation index. South Korea boasts leading and competitive positions in diverse industries, such as semiconductors, display, internet and mobile services, automotive, shipbuilding and health care.

Why is there such a large valuation discount?

Despite these achievements, the South Korean stock market might be one of the cheapest in the world. We believe that the main reasons for this discount are historically weak corporate governance policies employed by South Korean companies and the inefficient capital allocation by management teams.

Historically, majority shareholders and the management of South Korean companies have employed strategies that work against the benefit of all shareholders. Through circular holdings and pyramid-like structures, majority shareholders of certain business groups, known as "chaebols," were able to control networks of public companies despite owning relatively low personal stakes. These controlling shareholders often siphoned off company assets for their own benefit through related-party transactions or unfair mergers.

Compounding the issue, capital return to shareholders has been extremely low as majority shareholders tended to view company money as their own (Figure 2). Moreover, South Korean managements' understanding of efficient capital allocation has been rudimentary, as they grapple with the current low-growth environment after a few decades of high growth. Many South Korean companies sit on large piles of cash and idle assets, further lowering their return on equity. 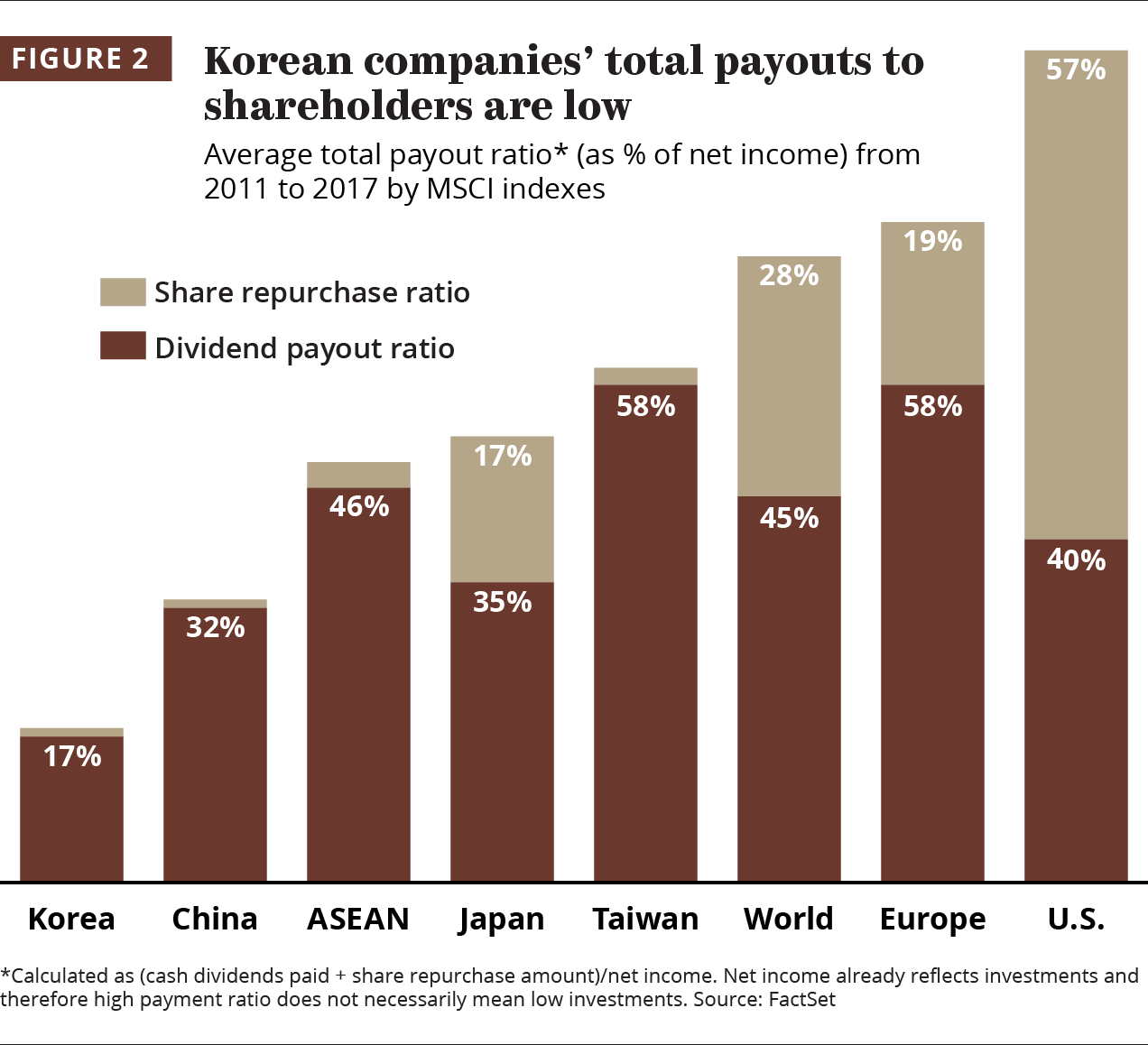 Poor corporate governance and minority shareholder abuse came into the spotlight with Samsung Group's merger of two of its affiliates, which was not beneficial for minority shareholders and which might have had ties to the impeachment of former President Park Geun-Hye.

Since then, the new administration has set its focus on a "fair economy." It appointed former shareholder activists to important regulatory positions to focus on monitoring and blocking any unfair transactions for the exclusive benefit of majority shareholders. So far, these efforts have led to a notable decrease in circular holding structures, as shown in Figure 3.

The new administration also started to fully embrace the Korea Stewardship Code, implemented in 2016 to improve corporate governance, so that institutional investors have greater recourse to monitor and engage with management and board members. Last year, the Korea National Pension Service, South Korea's largest public pension fund with about $600 billion in assets, adopted the code. 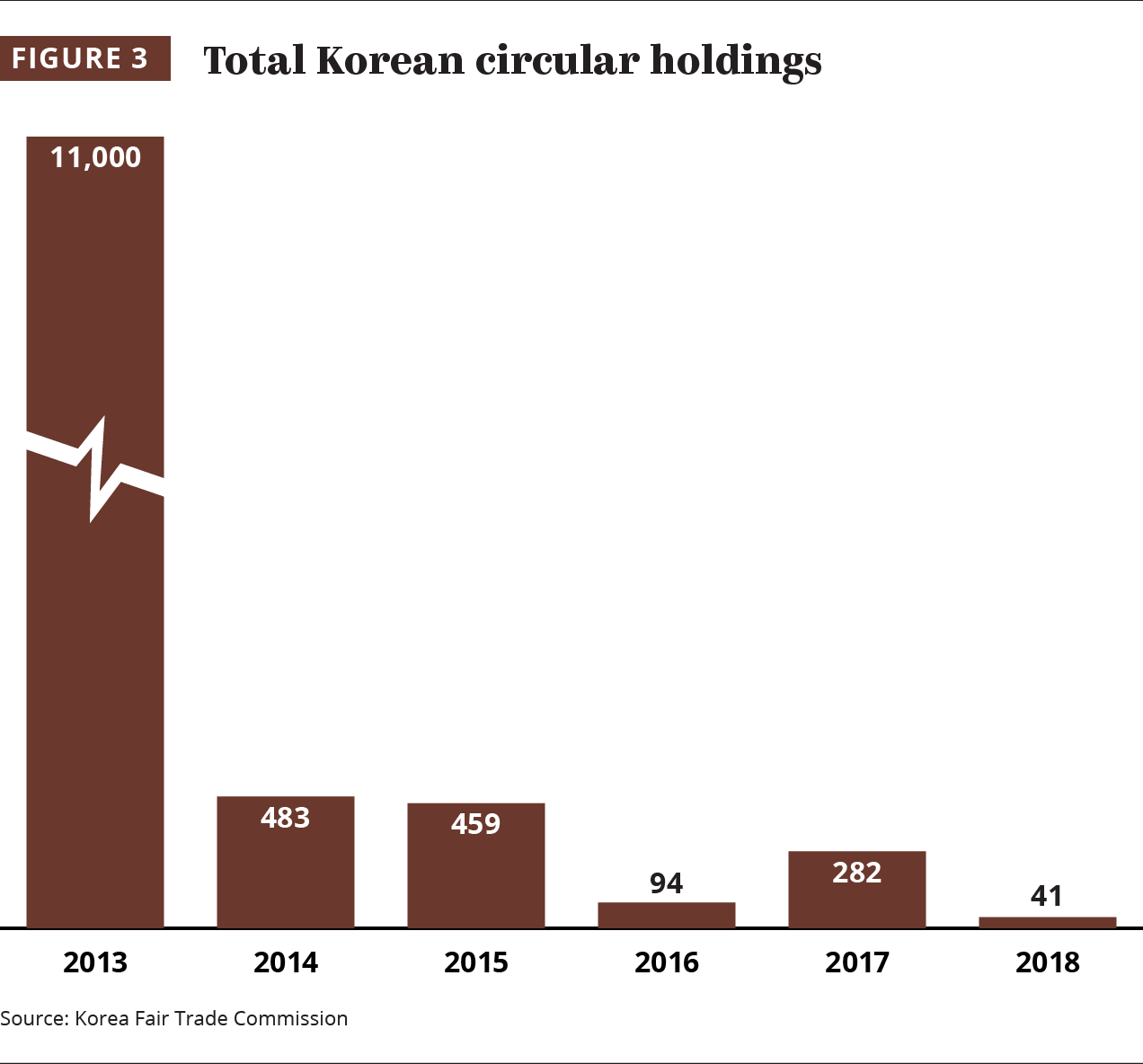 These movements also have encouraged shareholder activism to emerge in South Korea from both foreign and local firms. As a result, companies have begun to improve capital allocation strategies, including paying out more money to investors, as shown in Figure 4. For example, Samsung Electronics Co. implemented an unprecedented share repurchase of 9% of its outstanding shares and announced a 50% payout of its free cash flow going forward. Hyundai Motor Co. announced it will increase its payout ratio to 50% of free cash flow, a significant increase from less than 10% a few years ago. 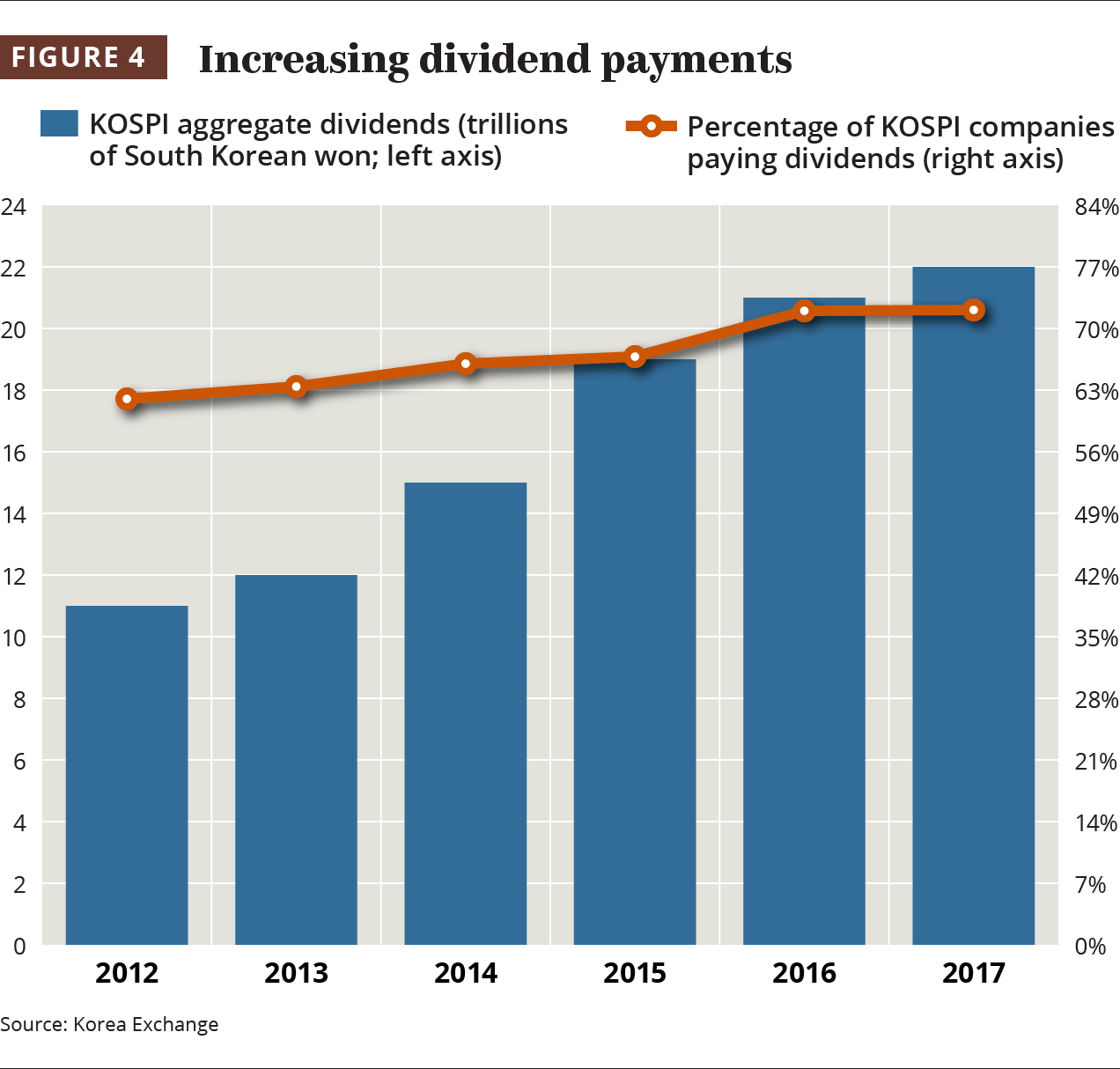 Because of increasing government and public scrutiny as well as social discontent, some management teams have started to change their behavior and respond proactively. For example, these management teams and majority shareholders are working to align their interests with minority shareholders by providing larger stock options to key executives and evaluating performance based on long-term share price appreciation. They also are starting to concentrate their wealth in certain holding or core companies, as opposed to spreading it over multiple affiliates and/or subsidiaries, which allows minority shareholders to identify opportunities to align their interests with those of the majority shareholders or management. Despite these steps, the market has been slow to take notice.

Because of the high inefficiency and extremely short-term nature of the South Korean stock market, we believe the South Korean market provides opportunities to purchase growing world-class assets at attractive absolute and relative valuations, in what looks to be the late stages of the current long-term debt and economic cycle. The key is to identify quality businesses run by families and/or management teams who are placing increased importance on the need to align themselves with minority shareholders. By identifying and investing in these opportunities, we believe investors could generate attractive risk-adjusted idiosyncratic returns in a turbulent market.

James Lim is senior research analyst for Asian equities at Dalton Investments LLC, Santa Monica, Calif. This content represents the views of the author. It was submitted and edited under Pensions & Investments guidelines, but is not a product of P&I's editorial team.

Commentary: ‘Do no harm' is not nearly enough