Governmental monetary and fiscal policy are well-known as the foremost concerns of fixed-income investors. One of the secondary considerations of fixed-income investors is understanding the role of the government in an issuer's ability and willingness to pay bond investors, the credit risk of a bond. This concern applies to U.S. Treasuries, as well as to the corporate debt of Argentine corporations. Investors examine both the country in which the issuer is domiciled and of the countries in which it operates.

Government involvement in payments on bonds is related to how close the financial markets are to a crisis. In the U.S. during 2008, the role and actions of the U.S. government were a major credit concern for investors in U.S. bank bonds. In the current market environment, fixed-income investors in developed markets are barely concerned with the role of governments in credit risk.

However, the fixed-income markets of emerging market countries are usually just a few missteps away from crisis, so the role of governments in credit risk is always an important consideration. Recent events have shone a bright light on the role of the Chinese government with both Chinese corporations and foreign corporations that operate in China. The bright light highlights issues that were an existing concern of emerging markets bond investors, particularly since issuers domiciled in China account for 20% of the issues in the Bloomberg Barclays Emerging Markets USD Aggregate index.

The breakdown of the China weighting of 20.06% in the index by sector shows that about 11% are classified as agency, as an arm of the government. Many of the high-yield industrials in the table below are property development firms that are particularly sensitive to government policy. Looking at the individual issues in the 20.06% weighting, and in light of the government's dominating role in the economy, it is clear that they exist at the will of the government. In addition, many of the higher-yielding bonds are actually issued by legal entities from the Cayman Islands and the British Virgin Islands. In the case of a default, the legal status may make it even more difficult to pursue payment. 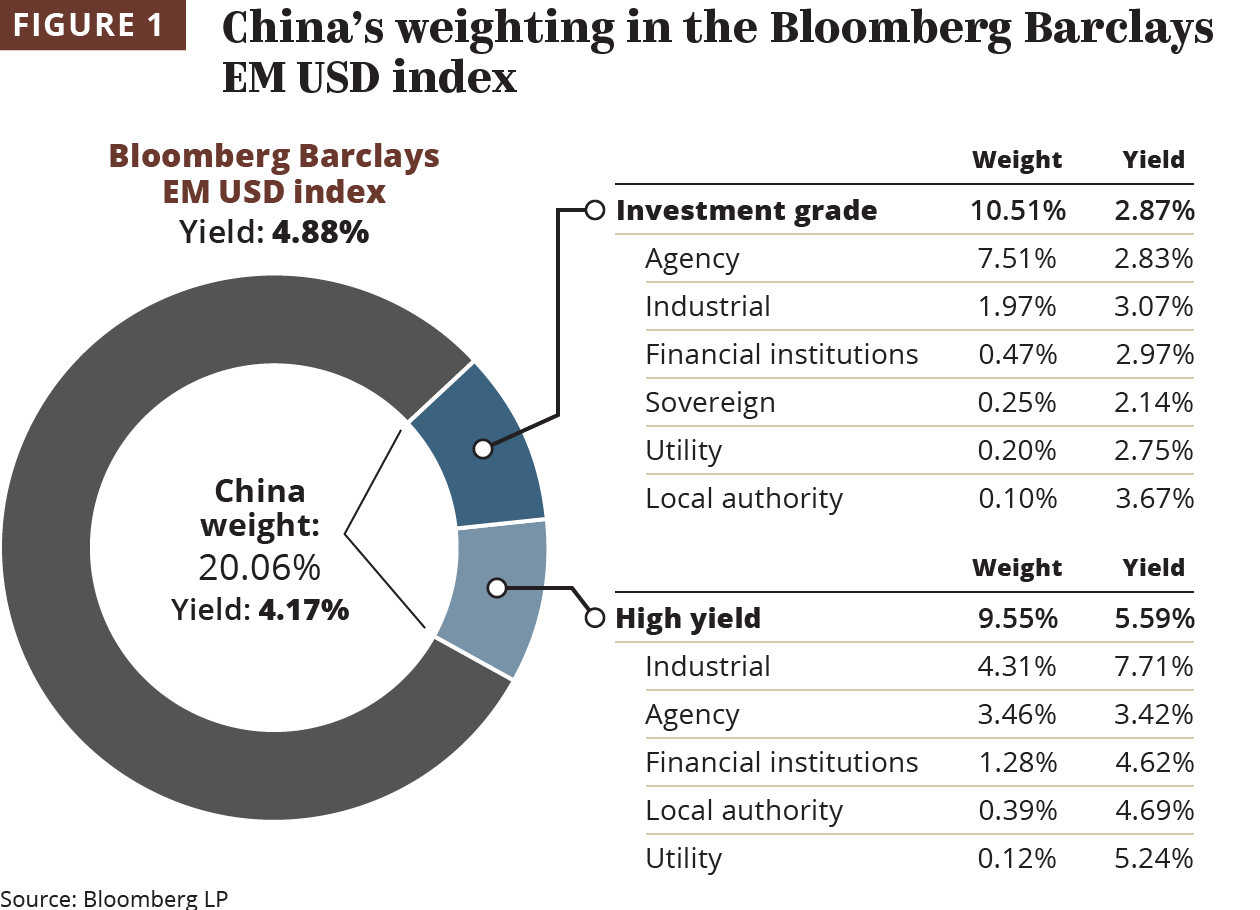 Government ownership of corporations that are central to the functioning of the economy are not at all unique to China. It is not at all unusual for large emerging market debt issuers to be corporations that are 100% owned by the government, like the Chilean copper company CODELCO, or partially, like Petrobras, the Brazilian national oil company. What is unusual is the degree of government control over the economy.

One avenue by which the government maintains control over both private- and public-sector corporations is through a banking system that is largely owned by the government. The four largest banks in the world are Chinese banks, and even though their "preference" stock is publicly listed, they are referred to as state-owned banks, with the state controlling the ordinary shares. The banks act as an arm of the government. The government can, and does, withhold bank funding to companies to implement public policy.

When a Chinese issuer is unable to make an interest payment that is due, the question for an investor is whether the Chinese government, acting through its banks, wants to send a message to the markets. In 2010 and 2011, when Chinese entities were just beginning to issue bonds in the U.S. market, there was a question of how defaults would be handled by the courts since there was no history to consider. The conventional wisdom was that the government had to support any issuer because it wanted to maintain access to international capital markets. As the market has grown, that perceived support has dissipated in part.

The Chinese government also sent another message concerning credit risk. In 2016 and 2017, there were a flurry of newspaper stories along the lines of "Scores of Chinese billionaires and CEOs have disappeared in 'state-sanctioned abductions.' " Even though the stories may have diminished, the message has not.

According to the Climate Bond Initiative, China issued more than $30 billion in green bonds in 2018 to finance climate change solutions, mostly issued through financial institutions controlled by the government and local government entities. How does an investor view these bonds in light of the human rights abuses by the government? Is a green bond issued by a state-owned bank "better" than a plain vanilla bond issued by the same bank?

The iron hand that was recently on display in China is usually gloved in velvet, but the news stories have brought this aspect of emerging markets to a wider audience. Governments in many emerging markets rule by arbitrary decree when it suits their whims. Investors should re-examine their country exposure and make sure that the risks they are taking are in line with the expectations of their stakeholders.

Patrick Faul is director of research at LM Capital Group LLC, San Diego, Calif. This content represents the views of the author. It was submitted and edited under Pensions & Investments guidelines, but is not a product of P&I's editorial team.