Segantii Capital profits by seeing through noise of a volatile landscape

A little-known $3.5 billion Asian-Pacific fund based out of Hong Kong thrives on volatility has proved its ability to generate healthy gains in most markets.

Betting on the gradual liberalization of regulatory and corporate standards of the Eastern world appears on first glance to be an unusual and risky thesis on which to base a hedge fund strategy. One only needs to think what just happened to fund managers who were believing in Argentine reforms.

But that strategy is exactly what Simon Sadler was focused on when he set up his Hong Kong-based firm Segantii Capital Management Ltd. — and his $3.5 billion Segantii Asia-Pacific Equity Multi-Strategy Fund — a dozen years ago in the eye of the financial crisis.

It took several years for many managers to make up for what they had lost during the Great Recession. Mr. Sadler, Segantii's founder and chief investment officer, suffered no such drawdown, according to data from Eurekahedge Pte. Ltd., gaining instead 24% over his first 13 months through 2008, then adding 18% in 2009.

It raises the question: How did a fund geared to a long-term vision outsmart the short-term punch of the global financial crisis?

Mr. Sadler said he also was keenly aware of the short-term pricing inefficiencies across much of the Asian-Pacific region because local markets are often dominated by mercurial retail investors, fluctuating liquidity and restricted capital flows. And he has repeatedly taken advantage of such mispricing opportunities, especially during sharp bouts of turbulence.

In 2011, when the eurozone sovereign debt and banking crisis reverberated globally and the Fukushima Daiichi nuclear power plant was melting down, the fund generated its largest annual gains — up nearly 41%, according to Eurekahedge. And when the bottom fell out of the markets in the fourth quarter of 2018, the fund realized more than half its 11.34% gain for the year.

One clear rub is if rising tensions and fears dries up trading activity.

Segantii struggles when active markets and volatility dissipate. Simply put, it's harder to make money when markets stall. That occurred in the second half of 2013 through the first quarter of 2014 as foreign institutional investors withdrew money from the region.

Fortunately for Segantii, there have been few such extended periods of such passivity. The fund's overall results have impressed Dan Parker, deputy chief investment officer of the Texas Tech University System's endowment, which has a chunk of its $1.3 billion portfolio with Segantii. Mr. Parker declined to disclose the size of Texas Tech's investment in the fund.

Mr. Parker regards the fund "as a rare find — a true absolute-return fund that has delivered positive returns through multiple significant market drawdowns, while also producing positive returns when markets are rallying."

That echoes the sentiment of a venerable Zurich-based institutional investor, which has been invested in Segantii since the fund's launch. Wishing to remain anonymous, the Swiss asset manager's global head of hedge fund investment due diligence said: "Segantii offers us unique, idiosyncratic exposure that's been consistently producing an impressive risk-return profile we've seen no place else."

Overall, about 60% of Segantii's investors are institutional. About 74% of those investors are based in North America, with 20% in Europe and 6% in Asia-Pacific. 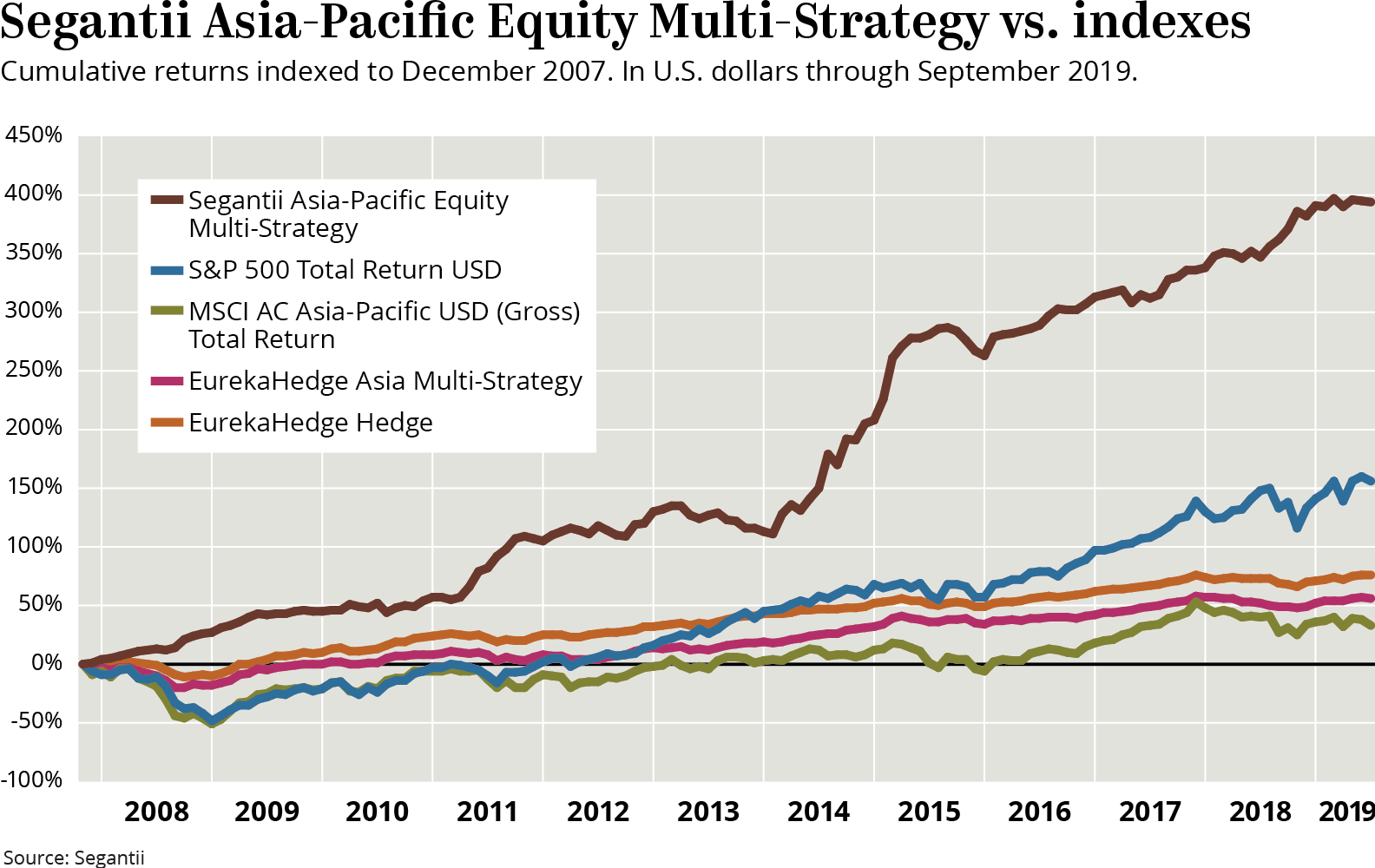 While working in Moscow in 1998 at the investment bank Brunswick Warburg trading Russian shares, Mr. Sadler learned how an emerging debt and currency crisis can devastate a local economy. He witnessed contagion and how quickly things could head south.

"Liquidity dries up, markets freeze up, and suddenly a hot market turns very cold," he said.

That experience informed his defensive mindset.

His cautious, opportunistic, low-net beta approach has paid off. Since inception, his fund has recorded annualized gains of more than 14.5% with volatility of less than 9%.

In a little more than two years, allocators took note of the fund's performance, which pushed up assets from their original launch level of $26 million to $266 million by the end of 2009. As of October, the fund was running $3.5 billion.

In 2010, having temporarily closed the fund to consolidate assets, Mr. Sadler hired a new partner. A colleague from his early training days in 1991 at Nikko Europe PLC in London, Mr. Ersoy was brought on as CEO to institutionalize the fund — to solidify the business by improving risk management, finance and operations, and securing large investors.

One thing the new partnership achieved early on was a more clear branding of the fund's multistrategy focus to its core expertise in relative value and event-driven trading.

Two examples: Segantii had been pursuing a relative value play, which was given a boost by a 2014 change in China's policy that opened up trading of homeland A shares to foreign institutional investors; and a series of event-driven investments created by Japanese Prime Minister Shinzo Abe's efforts to improve Japanese corporate efficiencies.

China's decision to increase foreign access to homeland shares was designed to close the substantial valuation gap between the price of shares of the same companies that trade in Hong Kong as well as in Shanghai and Shenzhen.

Abenomics created opportunities for local and foreign investors to purchase shares of desirable corporate subsidiaries, which had been trading on their own. They were likely to see a spike in price if targeted for acquisition by the parent company or an external interest. (See related story for more details on both strategies.)

A lack of active markets and volatility are the fund's Achilles' heel. The only time this struck Segantii was during a nine-month period starting in July 2013. Major allocators pulled out of the region, leaving trading activity lethargic and the fund's main strategies anemic.

During this period, the fund experienced its worst drawdown of 10.2%.

Segantii was able to contain the fallout by reducing exposure to struggling strategies and to less liquid trades that were in the red, and by increasing hedges to counter losses. This helped limit the fund's 2013 net decline to 1.68% — its only negative year. And China's efforts to close the price gap between mainland and Hong Kong shares helped revitalize investor interest in the region and propelled Segantii's 35% gain in 2014.

In the fourth quarter of 2018, when markets were tumbling across the board, especially in December, Mr. Ersoy recalled being busier during that Christmas time than ever before over his 30-year career. In addition to buying put options and shorting U.S. and Asian market indexes, the fund increased core trades and established positions in a series of Asian and U.S. corporate events that much of the market was staying clear of.

While most funds saw healthy full-year gains turn into losses, Segantii, at this time, realized half of its full-year gain of 11.34%.

Texas Tech's Mr. Parker said he is concerned about future asset growth of the fund. Since the endowment's initial investment in early 2017, Segantii's assets have increased by 50%.

Mr. Parker said he fears too many dollars could eventually be seeking too few quality investments.

While the fund doesn't specify a capacity limit, Mr. Ersoy says the issue of growth is addressed through a phased increase of investment specialists, which currently totals 47. They help identify new opportunities within existing strategies and into different markets. The fund also has no problem temporarily closing to pause growth to help ensure effective asset-opportunity mix. It's done so five times before.

Mr. Ersoy also contends the expanding number of these specialists help address investor concerns about key-man risk — an issue with which most small to midsize funds contend. Investors also like the partners having a substantial stake in the fund, which currently stands near 8%, according to Mr. Ersoy.

Unrest in Hong Kong is currently an elephant in the room.

Mr. Parker said he worries that if matters spin out of control, it could affect all locally based operations. Worst-case business scenarios might include temporary shutdown of the internet and access to offices.

While the fund won't venture a guess about where the current protests will lead, Mr. Ersoy said its 20-person office in London, composed of portfolio managers and traders, should enable Segantii to weather most investment and operational risks caused by temporary business disruptions.

With its recent decision to scrap a $300 billion lid on qualified foreign institutional investments, China may be seeking to assuage foreign investor concerns, especially as U.S. trade sanctions bite deeper.

This move could ratchet down near-term worries. Then again, it might not.