Investor demand for companies to commit to diversity, equity and inclusion was a highlight of the latest proxy season.

"Some of the biggest votes that we have seen" were for shareholder proposals on DEI, said John Wilson, vice president and director of corporate engagement for Calvert Research and Management in New York, with $31.8 billion in assets under management.

According to proxy firm Institutional Shareholder Services Inc., activism for DEI in the form of shareholder proposals nearly doubled in just one year, with 143 proposals in 2021 compared with 74 in 2020. It also found record levels of support for those proposals, averaging 61.6% for ones addressing diversity and inclusion at the workforce level, and ones targeting board diversity averaging 62.6% shareholder support.

One new category this season was proposals asking companies to undergo independent racial equity audits. Of the 20 filed, 12 wound up on ballots and they averaged 30.4% support, "which for a new proposal is quite significant," said Fassil Michael, head of thought leadership for ISS governance solutions in Rockville, Md. None of the proposals received majority support.

Many shareholders also pressed companies for demographic data and more transparency about how diverse they are. "Transparency is always very helpful moving the needle," Mr. Michael said, and a continued focus by institutional investors on the diversity of company boards "did wind up playing a big role this proxy season."

There were lots of majority votes, said Mr. Wilson of Calvert. "The reason is, you are seeing some of the largest investors start to support these proposals. You are starting to see a norm emerging, and that's great." His firm has been advocating for more diverse corporate boards for years. This year, Calvert changed its proxy voting guidelines so that any board with less than 40% diverse members, by gender or race, does not get its support.

It helps that Calvert has internal research on the economic benefits of a diverse company to back up that stance, an argument more investors are making. "Our fiduciary interest is to have diverse boards. It is primarily about how we deliver long-term results to investors," he said.

"Diversity is clearly an important part of human capital management. We are seeing progress accelerate on this issue," Mr. Wilson said.

The EEO-1 report provides details about the company's workforce, broken down by several racial and ethnic categories and by gender at each of 10 professional levels.

This proxy season, many of the top 100 companies Calvert engages with also saw many shareholder proposals withdrawn after the companies agreed to improve diversity measures, including more transparency.

Asked by Calvert to release EEO-1 reports, which are not currently made public, many of those 100 companies responded. In addition to the 15 already releasing the report, by January, 27 more had agreed to release theirs. For others that refused or ignored the request, Calvert filed 16 resolutions, and will consider more, Mr. Wilson said.

Companies are also responding to investor interest in board diversity. In just the past year, the percentage of S&P 500 companies that. a had at least one racially or ethnically diverse board member rose to 95% from 88%, while the share of Russell 3000 companies rose to 73% from 54%, ISS found. Gender diversity is still a concern but less a focus of this year's proxy policies.

Looking ahead to the next proxy season, "My expectation is that this trend will continue. There is definitely movement," Mr. Michael said.

A new study by JUST Capital also found companies getting the diversity message when it comes to their boards, with rising percentages of the largest U.S. publicly traded companies disclosing racial or ethnic data on board members or director nominees. The independent research non-profit organization's Corporate Racial Equity Tracker gathers DEI data disclosed by the 100 largest employers in the Russell 1000, to help investors check how companies are fulfilling their commitments on diversity, equity and inclusion. While only 45% of those 100 companies disclosed the data in 2019, that swelled to 80% just two years later, even among companies with low rates of board diversity. The most common range of board racial or ethnic diversity was between 20% and 30%.

Another indicator of how much companies are listening to investors is when it comes to paying executives. An analysis by Farient Advisors LLC of S&P 500 companies' compensation disclosures shows corporate boards paying closer attention to DEI when making decisions and setting targets for executive compensation.

DEI a growing factor in exec pay
Percentage of S&P 500 companies using DEI measures/considerations in their incentive systems, by sector. 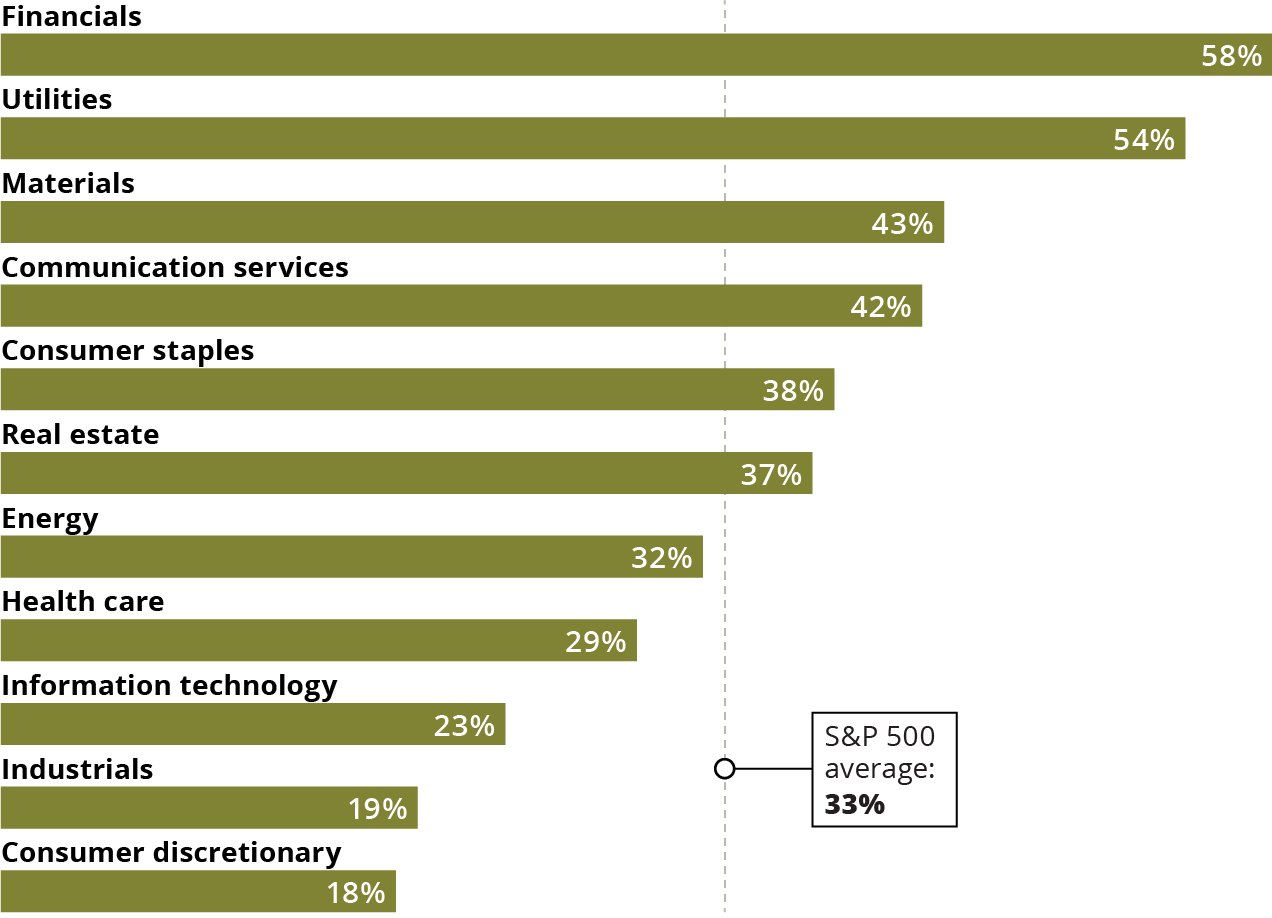 Financial firms did the most to connect diversity with executive pay, with 58% referring to DEI when determining incentive plans and awards. Companies offering discretionary consumer goods like cars, leisure activities and high-end apparel, showed up on the opposite end, at 18%.

Companies are trying to find their DEI bearings and as they gain experience measuring DEI performance, it is expected that more companies will quantify and disclose how they measure and set DEI goals when making compensation decisions, according to Farient.

Companies are also preparing for the possibility that the Securities and Exchange Commission will get them there faster. As part of broader efforts to update the agency's disclosure regime, information on human capital including diversity and climate risk will be addressed first, said Chairman Gary Gensler, who has asked SEC staff to work out specific proposals.

At a recent financial regulators conference, Mr. Gensler addressed head-on the expected resistance to more disclosure demands. "Experience has shown that disclosure requirements can strengthen economic activity over the generations," helping investors, capital formation and the cost of capital, he said. Objections have been raised since the SEC began regulating disclosure in the 1930s "that it could spell the end of capitalism" but that hasn't borne out, Mr. Gensler said.

The recommendations are now in the hands of SEC officials. Mr. Gensler signaled his interest in taking them on, telling committee members that his agency will be looking at ways to improve. "The asset management industry has a lot of work to do to increase racial and gender diversity," he said.

To help companies, asset owners and asset managers make progress on DEI, the Institutional Leadership Network representing 14 institutions with $8 trillion in assets under management is working on an inclusive finance platform that investors and companies can use to integrate equity, diversity and inclusion into their organizations.

It should also spur collaborative progress on DEI at proxy season and throughout the year. "Our organizations have shown that they can have a meaningful impact when they join forces towards a shared goal," said Francois Cremet, co-leader of ILN's Diversity in Investment Initiative and senior director of stewardship investing at the C$365.5 billion ($297.2 billion) Caisse de Depot et Placement du Quebec, Montreal, in a statement on the platform.