Record year will be tough act to follow in 2022

Ari I. Weinberg
Reprints Print
Rich Lee said with so much ‘money in the system,’ capital is flowing ‘everywhere.’

For exchange-traded funds, 2021 will be hard to top.

"This is the story of money in the system," said Rich Lee, head of program trading for Robert W. Baird & Co. in New York. "Look at ETF volumes, the surge of assets into crypto, even online betting. It's going everywhere."

Everywhere except traditional mutual funds. Traditional funds brought in just $10 billion in net new assets through Dec. 8, recovering from full-year net outflows of $486 billion in 2020, according to the latest data from the Investment Company Institute.

For ETPs, market leader BlackRock Inc. now manages $3.2 trillion in assets globally, according to research firm ETFGI, taking in $268 billion in net new assets through November. Vanguard Group Inc., the world's second-largest issuer, took in $325 billion (mostly in the U.S.) to close November with $2.2 trillion in ETF assets under management. The world's third- and fourth-largest ETF issuers, State Street Global Advisors ($1.1 trillion) and Invesco Ltd. ($469 billion), had reportedly been engaged in merger talks throughout the year. 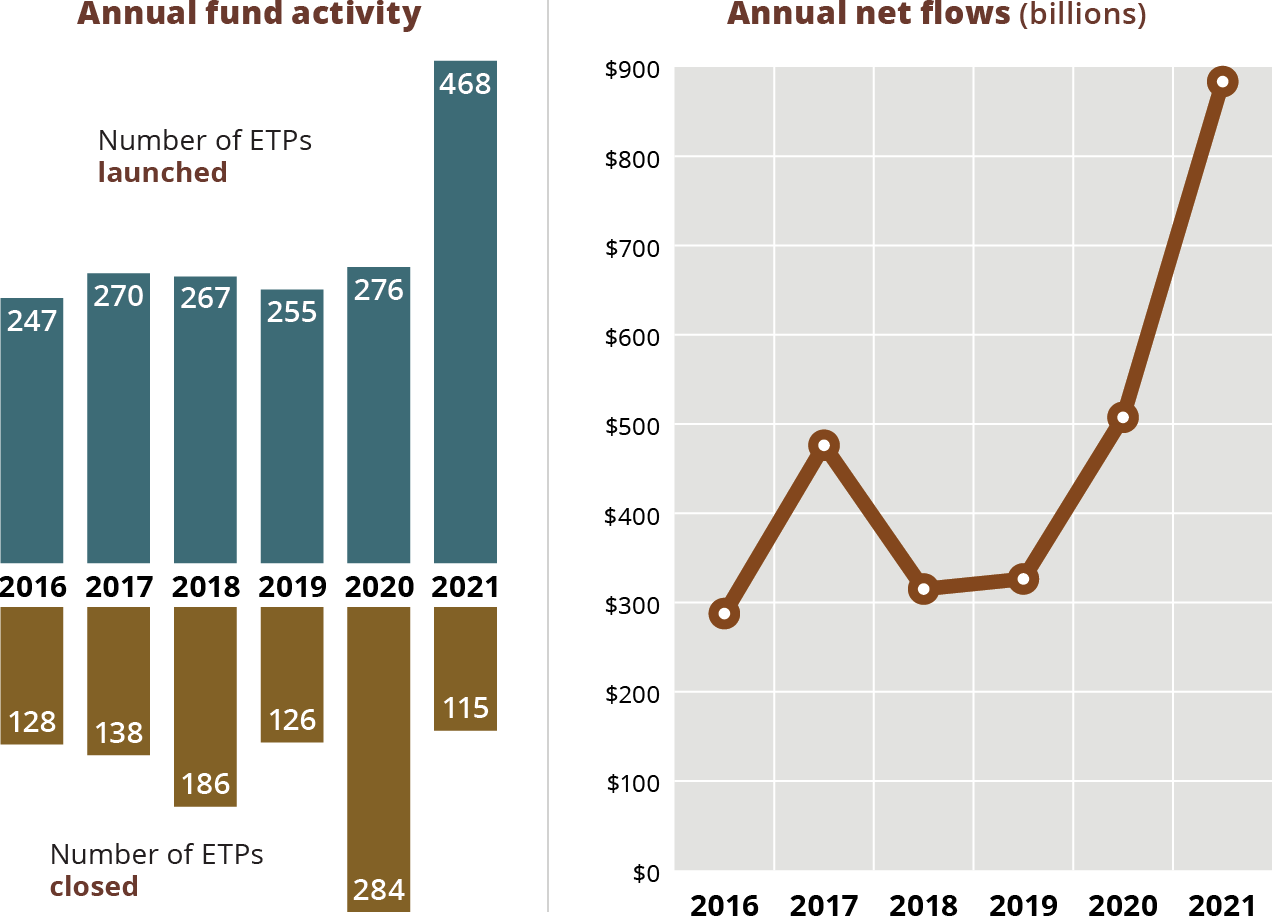 ETP asset growth is not just a U.S. phenomenon. According to ETFGI, net inflows to ETPs in Europe, Canada, Asia-Pacific (ex-Japan) and Latin American are all on track to pull in nearly double the assets of 2020.

U.S.-listed products are where global investors often turn for liquidity, but Deborah Fuhr, managing partner and founder of ETFGI in London, sees greater opportunity for European-listed products in light of the European Union Sustainable Finance Disclosure Regulation that requires funds marketed in European to declare their level of ESG integration in the investment process.

"Institutional investors want more clarity and assurance around ESG-based products," Ms. Fuhr said. "They're becoming very wary of greenwashing and pinkwashing," the practice of saying a product is more environmentally or socially aware than it really is.

This past year also marked a capitulation of sorts for a swath of traditional mutual fund issuers. Dimensional Fund Advisors LP, which had tiptoed into the market with three launches late in 2020, converted six tax-managed mutual funds to ETFs, helping to bring its U.S. ETF assets under management to more than $40 billion. Another holdout, Federated Hermes Inc., launched its first U.S. ETFs in December and Neuberger Berman Group LLC announced plans for three products, while Capital Group Cos. Inc. is set to launch six actively managed products early in 2022.

In the current ETF market, however, these fund issuers will be just another face in the crowd. According to FactSet, 468 new exchange-traded products had launched through Dec. 15, compared to 276 for all of 2020, while only 115 products had been shelved.

The pace of launches, spurred by investor interest in thematic equity and ESG-integrated offerings, comes in the second full year of the SEC's ETF rule. The rule expedites the approval and listing process for active and indexed products that disclose their portfolios daily. In fact, the adoption of the rule may have helped to quell offerings in a variety of less-than-daily disclosed ETFs. Currently, only a handful of actively managed ETFs shield their portfolios.

While the BlackRock U.S. Carbon Transition Readiness ETF, now at $1.6 billion in assets under management, was the largest non-conversion launch of the year thanks to anchor investments from the $321.9 billion California State Teachers' Retirement System and Finland's Varma Mutual Pension Insurance Co., most of the new product attention was focused on the "will they or won't they" discussion regarding the SEC's approval of bitcoin and other crypto-based ETPs.

The SEC scuttled every spot bitcoin product it considered — highlighting concerns around investor protection in the cryptocurrency market. Ultimately, the ProShares Bitcoin Strategy ETF — an actively managed product holding front-month CME bitcoin futures — made it through the gauntlet and launched on Oct. 19. The fund now holds $1.2 billion in assets. (ETFs holding crypto assets directly are available in Canada, Brazil and several exchange in Europe.)

Dave Nadig, chief investment officer and director of research for ETF Database and ETF Trends, sees the hype around cryptocurrency ETPs as a bit of a red herring.

"Where crypto gets really interesting is in the tokenization of asset management and intellectual property to build the next generation of financial services," he said.

Another index and ETP adjacent innovation that caught wind in its sales in 2021 was "direct indexing," essentially programmatic portfolio management akin to separately managed accounts.

Over the course of the year, a handful of companies offering direct and customized indexing were acquired by large asset managers and financial institutions including BlackRock, Morgan Stanley and Vanguard (making its first ever acquisition). These platforms offer broader, and eventually more customized, direct equity holdings for smaller accounts and better tax management compared to a mutual fund or ETF.