On the heels of a record year for net inflows at $487 billion, the ETF market could surpass that amount in just a few weeks — with half a year to spare. According to FactSet Research Systems Inc., through June 21, U.S.-listed ETFs had captured $434 billion in net inflows and, unlike prior periods of intense asset growth for ETFs, this flow rally is remarkably broad.

"A majority of the flows is coming from ETF models, which have grown significantly in the past year," said Reginald M. Browne, New York-based principal at electronic market maker Global Trading Systems LLC. "While the risk-on rally began last year with a large-cap bias, there has been a shift to value this year. Many sector funds are reinflating, as well as commodities and raw materials ETFs, rolling all the way down to short-duration fixed income."

But Mr. Browne said that self-directed retail investors (even those who rally behind meme stocks) can't be overlooked as drivers of recent ETF activity. "They are a little bit less brand-driven and show no allegiance to any one issuer," he said. AT GTS, according to Mr. Browne, the ticket count from retail brokerage apps has doubled in the past year. Moreover, retail money market fund assets have been steadily declining, down $100 billion to $1.43 trillion since early February, according to Investment Company Institute data through June 16.

In an recent research note, Matthew Bartolini, head of SPDR Americas research at State Street Global Advisors in Boston, wrote that 66% of products had experienced net flows through April 30, the highest "hit rate" for the first four months since 2014 when the industry product count was 40% less.

ETFs on a roll
Total net yearly ETF flows, in billions. Data for 2021 are through June 21. 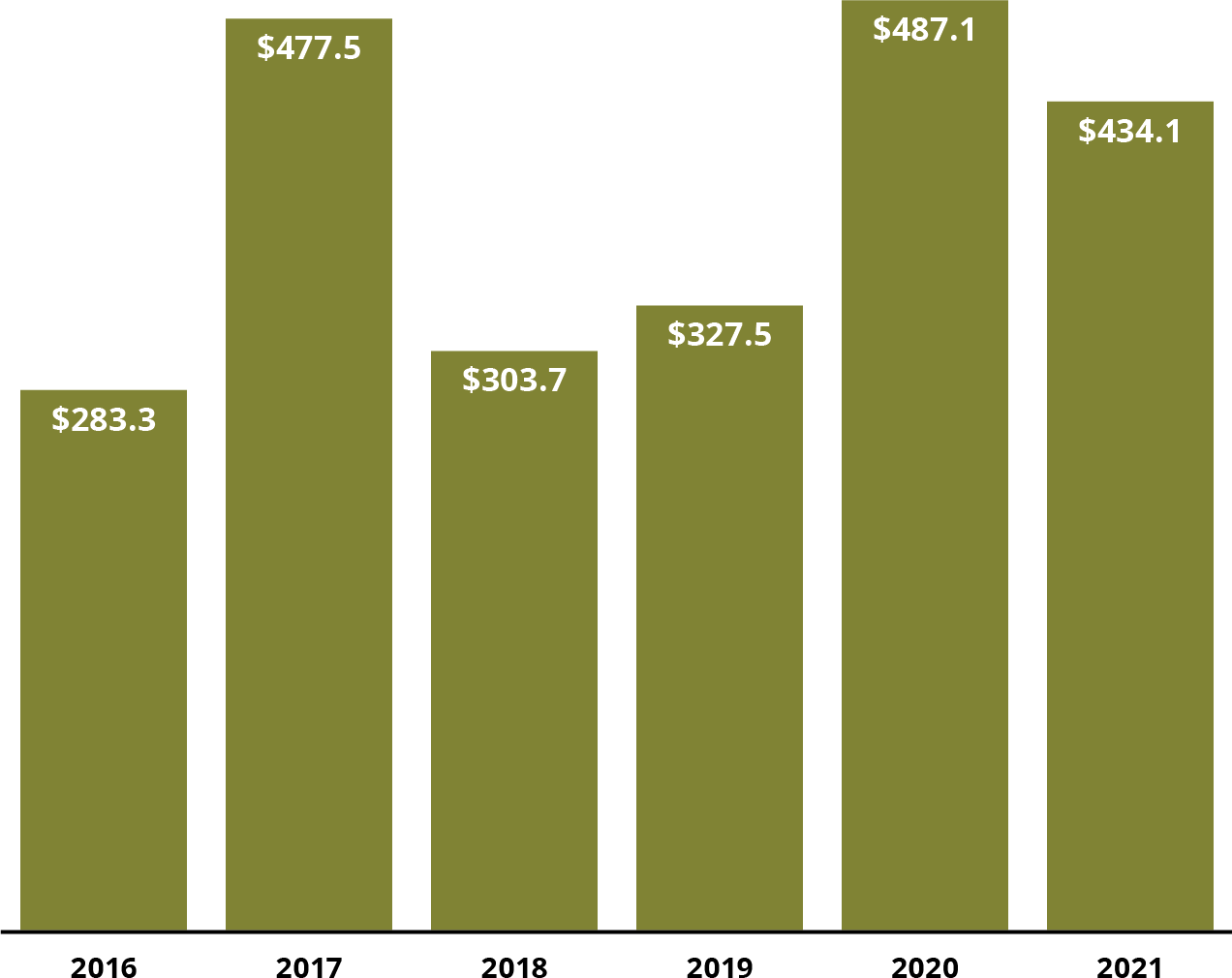 Among the ETFs punching above their weight in flows this year include the $48 billion Financial Select Sector SPDR Fund, the $14.8 billion iShares MSCI EAFE Value ETF, and the $9.6 billion Vanguard FTSE All-World ex-US Small Cap ETF. Each of these ETFs — among nearly 500 others — experienced net inflows at roughly 50% or more than their 2020 year-ending assets through June 10, according to FactSet Research Systems.

Moreover, 67 issuers are now managing between $100 million and $1 billion, up from 53 at the end of last year. "They have just enough assets for a good business without a major breakthrough fund," said Mr. Browne of GTS.

This breadth of activity is building what Bloomberg Intelligence senior ETF analyst Eric Balchunas has called the ETF "middle class," where investors are lifting products and providers into long-term efficacy. While the hot hands at ARK Investment Management LLC attracted billions in assets earlier in the year, other thematic and specialty product providers have been able to draw investor assets. Examples here include the $198 million Direxion Moonshot Innovators ETF, the $170 million First Trust TCW Securitized Plus ETF, and the $389 million North Shore Global Uranium Mining ETF, each adding more than 500% of their year-end assets in net flows through June 10, according to FactSet. The strength in flows has been accompanied by a near stemming of ETF closures, with only 20 products being pulled from the market as of June 17, compared with 138 over the same period last year. And new products and entrants to the market over the next few years could look more like old faces. While the conversion of two Guinness Atkinson Asset Management mutual funds to ETFs in March was a groundbreaking move, Dimensional Fund Advisors LP's shift of four mutual funds to ETFs on June 14 provided a road map for large-scale conversions, boosting Dimensional's ETF assets under management to $30 billion from $2 billion in a day.

"A similar decision by a firm like Capital Group could change that conversation completely," said Daniil Shapiro, associate director of product development at research and consulting firm Cerulli Associates Inc. This wraps into the "other big flow story," according to Mr. Shapiro, as the fund industry looks to find any form of kryptonite to beat back the relentless rise of Vanguard Group Inc.

According to FactSet, Vanguard has pulled in $152 billion in net flows this year, nearly double the assets gathered by BlackRock Inc. at $80 billion, giving Vanguard $1.83 trillion in U.S. ETF assets compared with BlackRock's $2.28 trillion.