Through Oct. 9, banks and asset managers had shuttered a record 225 exchange-traded funds and exchange-traded notes this year, according to FactSet Research Systems Inc. While some of the products had been on the market since 2002, 53 of the shuttered ETFs and ETNs had been trading for less than two years.

Investor preference, issuer consolidation and market conditions are each partly to blame for the heightened closures, but so is the brutally competitive market where BlackRock Inc. and Vanguard Group manage nearly two-thirds of the $4.7 trillion in ETP assets and capture nearly two-thirds of net inflows as well. There has been some light for new launches with 215 products introduced this year, ahead of last year's total of 188 at this point, according to FactSet. The regulatory burden for launching index and fully transparent active products was lifted following the adoption of the ETF rule by the Securities and Exchange Commission last fall. 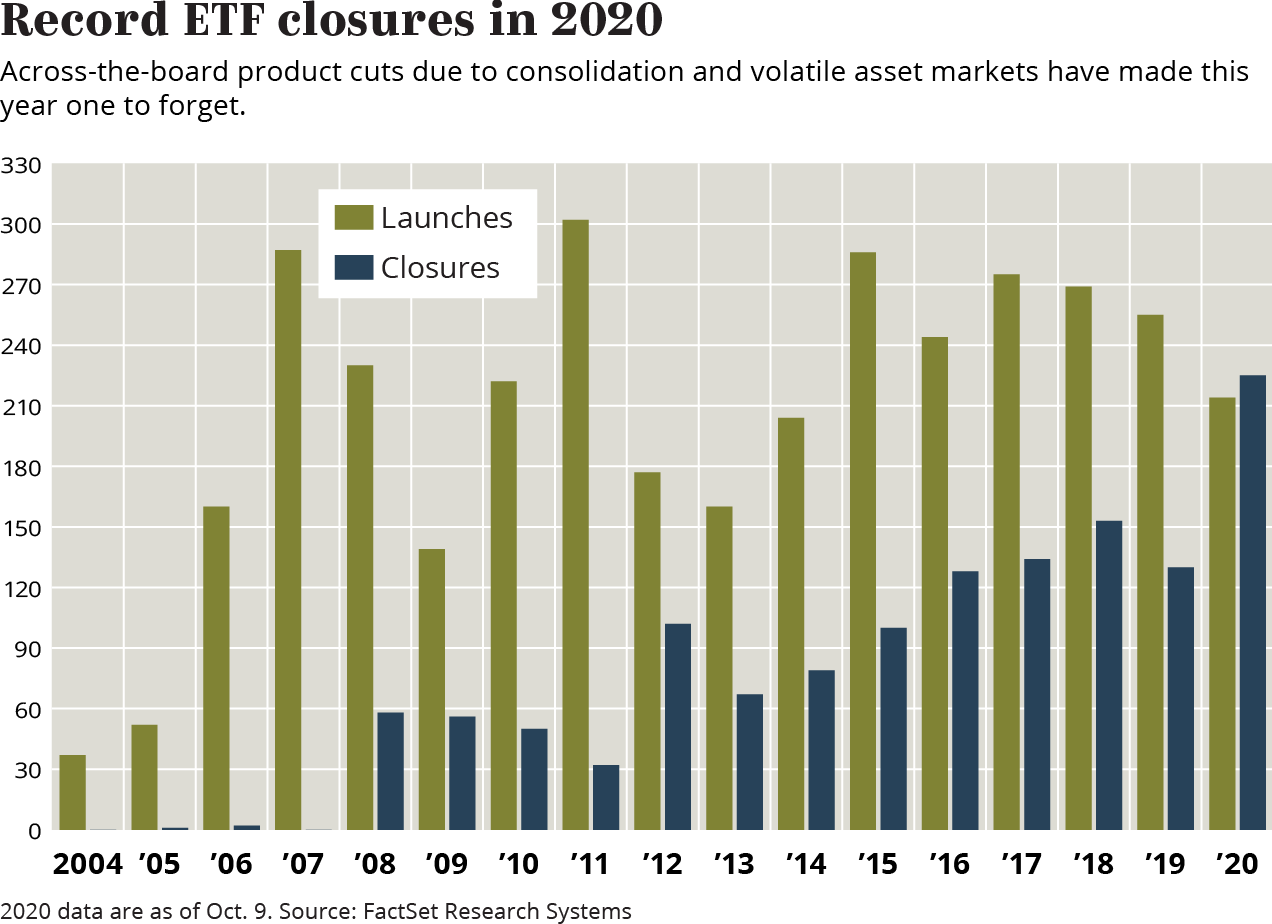 "Volatility in March took out some of the exotics (leveraged funds, ETNs) as the market swings made daily rebalancing a challenge," said Eric Balchunas, senior ETF analyst at Bloomberg Intelligence in Princeton, N.J. "And for new launches, unless you already know where the assets are going to come from, issuers are going to be gnashing their teeth through the process."

While many issuers are bringing out actively managed ETFs, both with daily transparency or utilizing one of several new structures that offer the more limited transparency of mutual funds, demand is still scarce.

"Our clients continue to drive toward products that are lower cost and tax efficient," said Ross Mayfield, investment strategy analyst at Robert W. Baird & Co. Inc. in Louisville, Ky., "but they're not necessarily calling out for active ETFs."

Carolyn Weinberg, managing director and global head of product, ETF and index investments at BlackRock in New York, sees active products as effective complements to a core index portfolio. "Investors can get intraday execution on actionable prices, but ultimately active is all about performance."

More than half of this year's launches have been active products, according to FactSet data, including "buffered" ETFs from several issuers that embed option strategies to limit drawdowns. While not yet launched, Fidelity Investments recently filed regulatory paperwork for an ETF version of former active stalwart Magellan Fund, and Dimensional Fund Advisors LP revealed plans for ETFs of its core exposures.

But Bloomberg's Mr. Balchunas even sees these efforts as too little too late for some storied brands. "It hasn't really sunk in how much the world has changed. Nineties-style diversified core strategies just won't drive investors to new products anymore."

While active ETFs are dominating launches, Baird's Mr. Mayfield says that he is seeing "increased demand for ESG products and portfolios" from clients and advisers. So it should be no surprise that BlackRock and Vanguard have been rounding out their ESG offerings in the last few years, with Vanguard launching an ESG-screened U.S. corporate bond ETF in September and BlackRock offering ESG versions of S&P indexes to complement its extensive offerings of ESG strategies tracking MSCI indexes. Nearly one-third of BlackRock's 38 new products launched this year follow up on the company's commitment to building out a fuller suite of ESG strategies.

"Most areas of indexing are covered by high-quality, low-cost products," said Rich Powers, head of ETF product management for Vanguard in Malvern, Pa., which has only launched four new products in the last two years, three of which are ESG trackers. "But we're watching the active ETF market really closely. Is there investor demand? Does the ETF structure change the dynamic? How are they trading? Might wider spreads eliminate some of the cost advantage?"

Of Vanguard's $6.4 trillion in total global assets under management across traditional funds, ETFs and trusts, 25% are in active strategies.

Invesco Ltd., which manages $256 billion, closed 43 ETFs this year following the completion of its acquisition of OppenheimerFunds from MassMutual in mid-2019. Other 2020 closures include 54 ETNs issued by banks UBS, Credit Suisse and Barclays, primarily, as well as a handful of one-off products from asset managers. And 40 of the closures came from both ProShares and Rafferty Asset Management (Direxion), known for offering leveraged and inverse-leveraged ETFs.

Wisconsin Investment Board adds a third ARK ETF to its portfolio