During the depths of the coronavirus pandemic, many near-retirees learned the hard way that the target-date funds in which many of them were invested weren't nearly as conservative as they thought.

Investors in 2020 target-date funds saw their balances shrink anywhere from 13% to 23% during the coronavirus sell-off from Feb. 20 to March 20, with the average 2020 target-date investor losing more than 17%, according to data from Morningstar Inc.

For investors expecting to retire this year, the declines proved too much to bear. Some committed the classic Investing 101 mistake, withdrawing assets from the funds and fleeing to safer money market-type accounts, a move that essentially locked in their losses.

Money rushed out of 2020 funds at a furious pace, losing a net of more than $4 billion in March, almost three times the previous month's outflows and significantly more than the assets pouring out of 2025, 2030, and 2035 target-date vintages, Morningstar data showed. 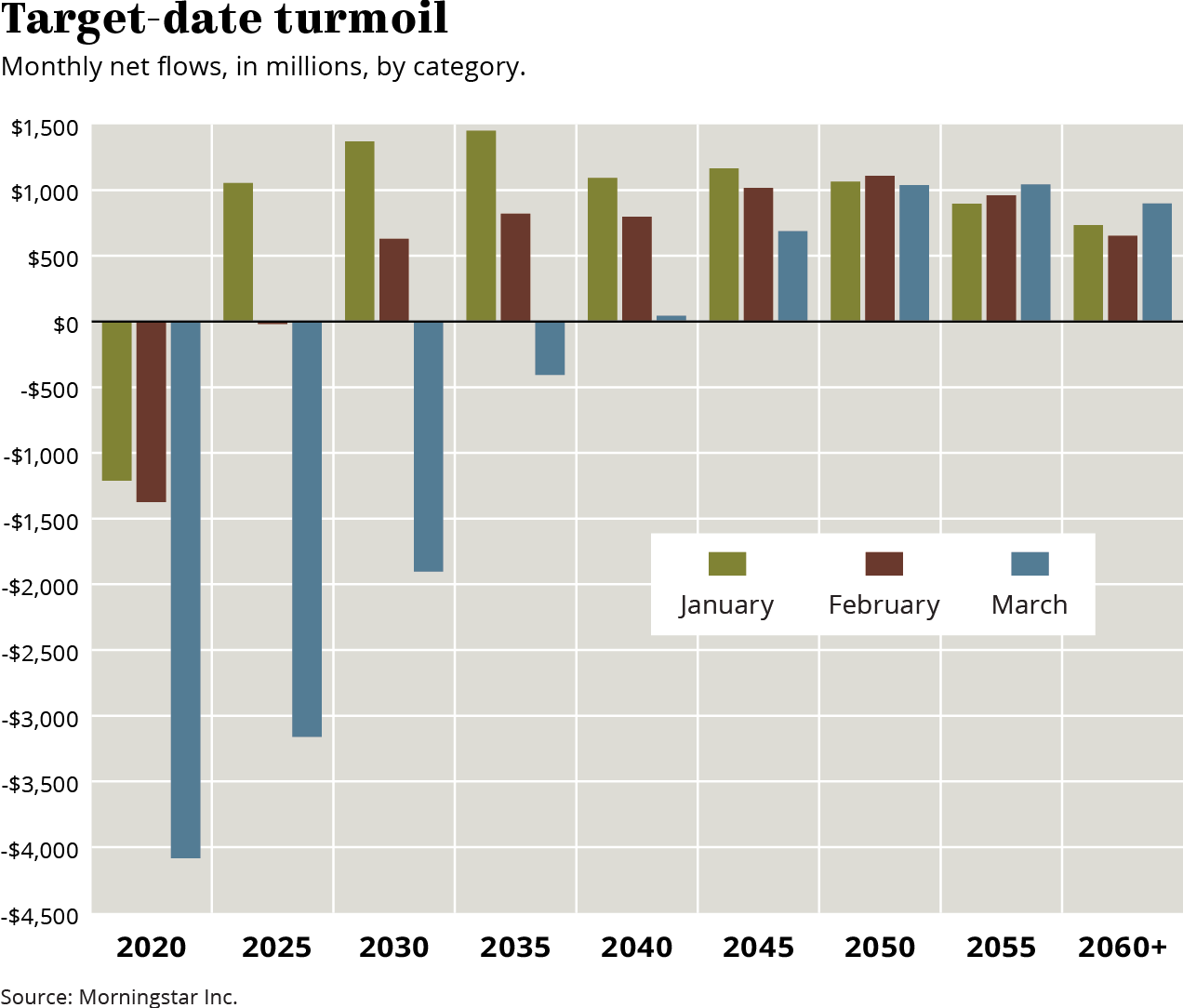 As plan sponsors look back on the wreckage from the sell-off, they're focusing on their target-date funds and taking an especially hard look at 2020 funds given how much is at stake for employees about to retire. While the funds have bounced back with the subsequent market rebound, plan sponsors are nonetheless asking questions about their target-date suites and how well they withstood March's unexpected stress test.

"These are conversations that our clients are having," said Jason Shapiro, director of investments at Willis Towers Watson PLC in New York, referring to target-date funds. "They're looking at their exposures; they're reassessing whether they are appropriate."

The increased scrutiny is due in large part to the dominance of target-date funds in plan lineups, with 97% of plan sponsors that use qualified default investment alternatives selecting them as their QDIA, according to Vanguard. The funds are also drawing plan sponsor attention due to recent lawsuits brought against employers over target-date investment risk issues.

Employers no doubt will have quite a bit to sort through, particularly as it relates to 2020 funds, which had the greatest level of what analysts call "dispersion," meaning outcomes varied significantly depending on the fund's risk profile. An investor in T. Rowe Price Group Inc.'s relatively aggressive 2020 fund, which allocates 55% to equities at retirement, lost 22.8% during the sell-off, while someone in the more conservative John Hancock Financial's multi-index preservation 2020 fund, which targets 8% in equities at retirement, lost 13.4%, according to Morningstar data.

"Just because you own a 2020 fund, it doesn't mean it's just like every other 2020 fund," said Leo Acheson, Morningstar's Chicago-based director of multiasset ratings who analyzed the performance of 55 target-date series during the coronavirus market meltdown.

While unexpected drops in retirement balances in the year one expects to retire will rattle most near-retirees, it is far "spookier" when the drops are more severe, leading to a greater likelihood that investors might pull money from the funds, Mr. Acheson said.

Indeed, many plan sponsors saw large movements out of target-date and core equity funds into money market funds, with some seeing a 50% increase in assets moving to cash-type holdings, according to Mr. Shapiro. For most of Willis Towers Watson's affected plan sponsor clients, the money did not flow back with assets in cash funds remaining flat and even increasing, he said. "What happened was participants reacted to the volatility in the first quarter. Some moved into cash at higher levels than you'd see in a typical quarter, and once they made that move, they were comfortable."

While outflows are expected from target-date funds at retirement, investors withdrew money at a much faster pace than they have in the past, according to Morningstar researchers. In March, investors pulled a net $4.1 billion from 2020 target-date funds, up from $1.4 billion in February and $1.2 billion in January. Investors as far as 15 years from retirement also withdrew assets in March, with 2025, 2030 and 2035 vintages seeing $3.2 billion, $1.9 billion and $405 million in net outflows, respectively. Target-date funds further away from retirement, in contrast, posted inflows beginning with the 2040 target retirement year. Morningstar's analysis of the net asset flows is based on 60 target-date series, which had $1.4 trillion in assets as of July 31.

The outflows are consistent with data from Prudential Retirement and Alight Solutions LLC. Prudential found that more than twice as many participants in its retirement plans made transfers out of 2020 target-date funds from March through May than they did from December to February. The record keeper also found that pre-retirees accounted for the lion's share of the equity assets, including those coming out of target-date funds, that moved to stable value and bond funds from March to May.

Individuals age 45 to 64 drove 75% of the assets transferred into stable value and fixed income, of which 47% was from individuals between the ages of 55 and 64, according to Prudential data.

Alight Solutions also saw similar trends with target-date funds across all vintages accounting for 48% of net flows within 401(k) plans in March, the single largest source of trading outflows that month. Most of the assets went into stable value funds, which captured 64% of the inflows in March, and money market funds, which captured 24%, according to the Alight Solutions 401(k) index.

Michael Volo, senior partner at Cammack Retirement Group Inc. in Wellesley, Mass., has seen stronger interest among plan sponsors in examining the performance of their target-date funds. "With the volatility that we have experienced in the first half of the year, there's been increased scrutiny, particularly in 2020 funds whose participants are at or near retirement," he said.

Mr. Volo said plan sponsor clients are allocating more time to target-date fund analysis in committee meetings with an eye to possibly replacing funds that did not perform as expected. "If the fund was a more conservative target-date series that had promised downside protection for folks close to retirement and did not provide that, there's absolutely greater scrutiny on those target-date suites," he said.

The extra time spent on target-date analysis is also due in part to fear of litigation. A number of recent lawsuits against plan sponsors over the hidden risks of target-date funds has gotten plan sponsors' attention, said Carol Buckmann, founder and managing partner at Cohen & Buckmann PC in New York. "I find that there are many sponsors who just don't understand these funds, and I'm urging my clients to review them at this point," she said.

"Plan sponsors who aren't concerned, should be," she warned. "They're the ticking time bombs of litigation."