As target-date funds continue to gain popularity and assets, those based on collective investment trusts are growing much faster than their mutual fund-based brethren, more than doubling their market share in six years.

"It's money," said Jason Kephart, a strategist on the multiasset and alternative strategies team at Chicago-based Morningstar Inc., describing a key attraction for choosing a CIT-based target-date fund vs. a comparable mutual fund-based target-date series.

"The performance tends to be similar" between comparable target-date series, but the CIT fees are less than the fees for mutual fund series, he said.

Mutual funds must charge a stated expense ratio listed in the prospectus for each share class; but CITs have more leeway. "This makes CITs more attractive to larger sponsors," he said.

CITs gaining favor
Target-date funds based on collective investment trusts have grown from 18% of the market in 2014 to 43% in 2020.
Growth of target-date assets by fund type (billions) 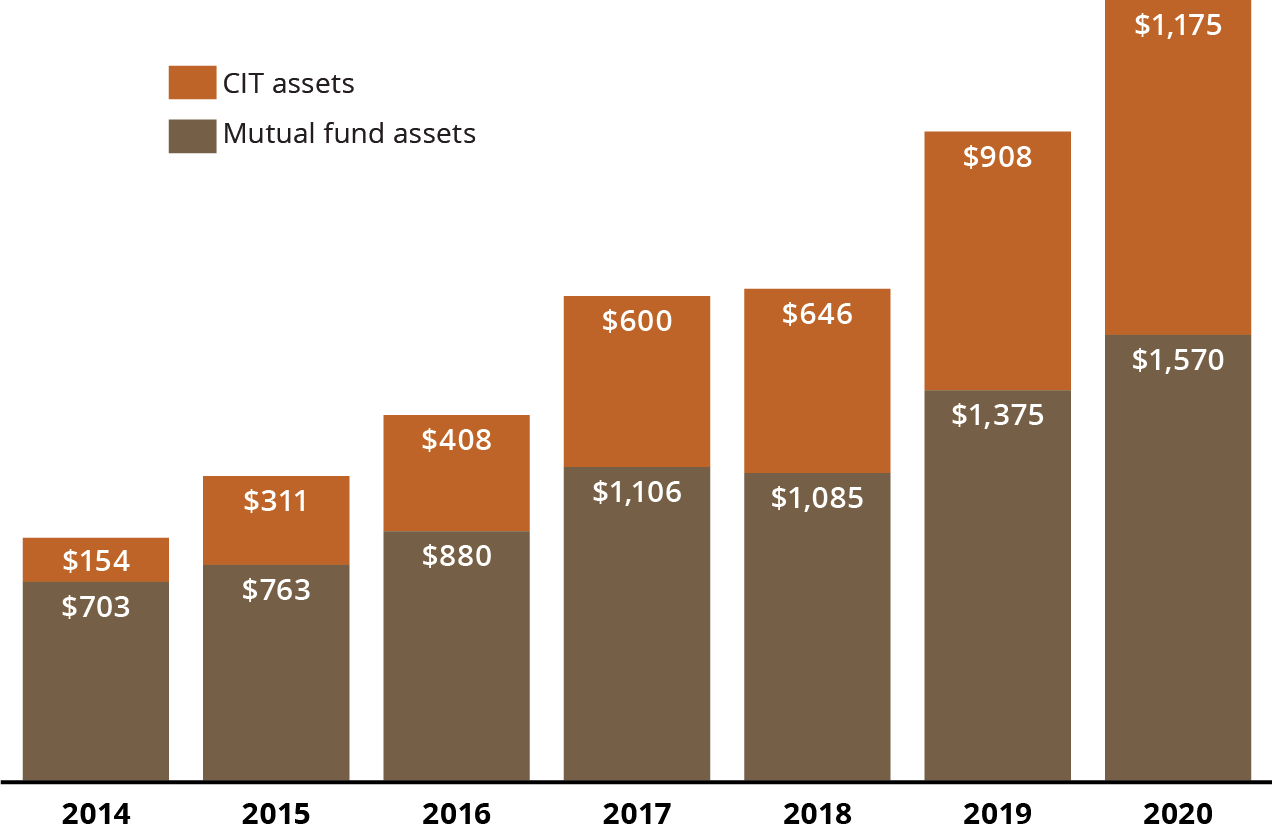 Because CIT data is less precise than mutual fund data — the former is provided by firms voluntarily to Morningstar — the CIT market share and asset size are likely larger than what Morningstar Direct is measuring, Mr. Kephart said.

He added that CIT-based target-date series could get a boost if Congress passes — and President Joe Biden signs — legislation, proposed in both the House and Senate, that would enable 403(b) plans to offer CITs.

The CIT advance also was underscored in an annual sponsor survey recently published by Callan LLC, San Francisco. Mutual fund-based target-date funds were used by 68% of respondents in 2010 while 22% used CIT-based series (the other respondents cited custom target-date funds or they didn't know). By 2020, the mutual fund target-date series offerings were down to 42% of sponsors while the CIT group was up to 41%.

The latest survey covered 93 sponsors, including clients and non-clients. About 61% had total assets of $1 billion or more.

There were 134 CIT strategies last year vs. 58 in 2015, according to Morningstar Direct. The number of mutual fund strategies rose to 57 from 54 during this period.

Mr. Kephart noted the overall yearly numbers reflect some ebb and flow in each category as some series are liquidated and others merge.

However, the recent rise in new CIT target-date series has been dramatic — 22 last year, 23 in 2019 and 12 in 2018, according to Morningstar Direct. Among mutual fund target-date series, there were four over this period.

Another target-date series has an approximately 60% passive/40% active ratio and still another has a 20%/80% ratio of passive management to a combination of active management and enhanced index.

"The No. 1 driver is sponsors unbundling their expense structure" by moving away from revenue-sharing, said Joseph Martel, a Baltimore-based target-date portfolio specialist at T. Rowe. "They want to separate investment expenses from administrative expenses."

CITs also provide fee flexibility. The more target-date fund assets in a plan, the more a sponsor can negotiate fees.

"In most plans, target-date funds are the largest assets," said Mr. Martel, referring to their prominent role as a qualified default investment alternative.

The glidepaths for all of the target-date series are the same — a "through" approach in which the ratio of equity to fixed income changes past the standard landing point retirement age of 65. Target-date funds using the "to" approach freeze the equity-fixed income ratio at the landing point.

Nuveen, the investment management arm of TIAA-CREF, entered the CIT target-date field in October 2019, with a series featuring a mixture of active and passive management, and again in December 2020, with an index-based target-date series. Both use the Nuveen TIAA Lifecycle brand and both use SEI Trust Co. as the trustee. CIT-based asset data wasn't available.

"There was strong demand," said Brendan McCarthy, the Boston-based managing director and head of DCIO.

"A lot of drivers for CITs are cost, but there are other factors — transparency, flexibility and regulatory oversight," Mr. McCarthy said.

Although he said Nuveen's mutual fund-based index series is low-cost at 10 basis points, the CIT index series is even lower at 8. The latter requires a sponsor to have $100 million in target-date fund assets; the former has no minimum.

Underlying investments in the two index-based target-date series are the same, and so is the glidepath — a "through" approach that goes 30 years past retirement. The actively managed mutual fund series and the CIT blend series have the same glidepaths as the index-based series.

PIMCO added a CIT-based target-date series in May 2020 because "ultimately, the market demands and expects target-date funds to be in a CIT format," said Bransby Whitton, executive vice president and target-date fund strategist, based in Newport Beach, Calif.

The underlying investments in the CIT series and in a mutual fund-based series, launched in December 2014, are "nearly identical," combining active and passive management, he said. The glidepaths, which use a "to" approach, are the same.

For CITs, his company is "primarily focused on market segmentation, rewarding the larger plans for their (asset) scale," he said.

For the mutual fund series, "the minimum initial investment for institutional and administrative class shares is $1 million," a spokeswoman wrote in an email. "However, it may be modified for certain financial intermediaries who submit trades on behalf of eligible investors."

Target-date funds see assets climb in 2020 despite pandemic – Morningstar
Equity gains propel 457 plans, but future growth is hampered
Annuities coming to target-date funds, but not right away
Recommended for You