Douglas Appell
Reprints Print
Frederic Blanc-Brude said EDHEC Infrastructure staffers worked for four years to gather two decades of data on 600 private companies, and that information will be a 'quantum leap' for investors who want to measure the risk-adjusted returns of infrastructure assets.

The first performance data for unlisted infrastructure equity EDHECinfra released showed returns for the year through March 31, including leverage, of 11.6%, slipping from annualized three-year returns of 12.6% and five-year returns of 14.1%.

The indexes, built on 20 years of data on 600 private companies collected by EDHECinfra's staff over the past four years, will position investors for a "quantum leap" when it comes to measuring risk-adjusted returns in infrastructure, said Frederic Blanc-Brude, director of both the institute and EDHEC Asia-Pacific.

EDHECinfra's database, which Mr. Blanc-Brude figures is as least four or five times deeper than its nearest rival, will allow investors to model cash flows, calibrate discount rates and measure the volatility of returns as well as gauge the impact of factors such as size, leverage and sector on outcomes, he said.

Current benchmarks, focused mostly on internal rates of return, have proven wanting, Mr. Blanc-Brude said in a May 30 interview. An EDHECinfra survey of roughly 130 asset owners, released in April, showed most using target return hurdles or listed infrastructure indexes as proxies for a benchmark, even as 90% expressed dissatisfaction with their choices.

Global infrastructure assets under management totaled $491 billion as of June 2018, up 9.8% from the prior year, according to Preqin data. Seventy-four funds raised $93 billion in infrastructure funds worldwide in 2018, up from 82 funds that closed on $47 billion in 2014. 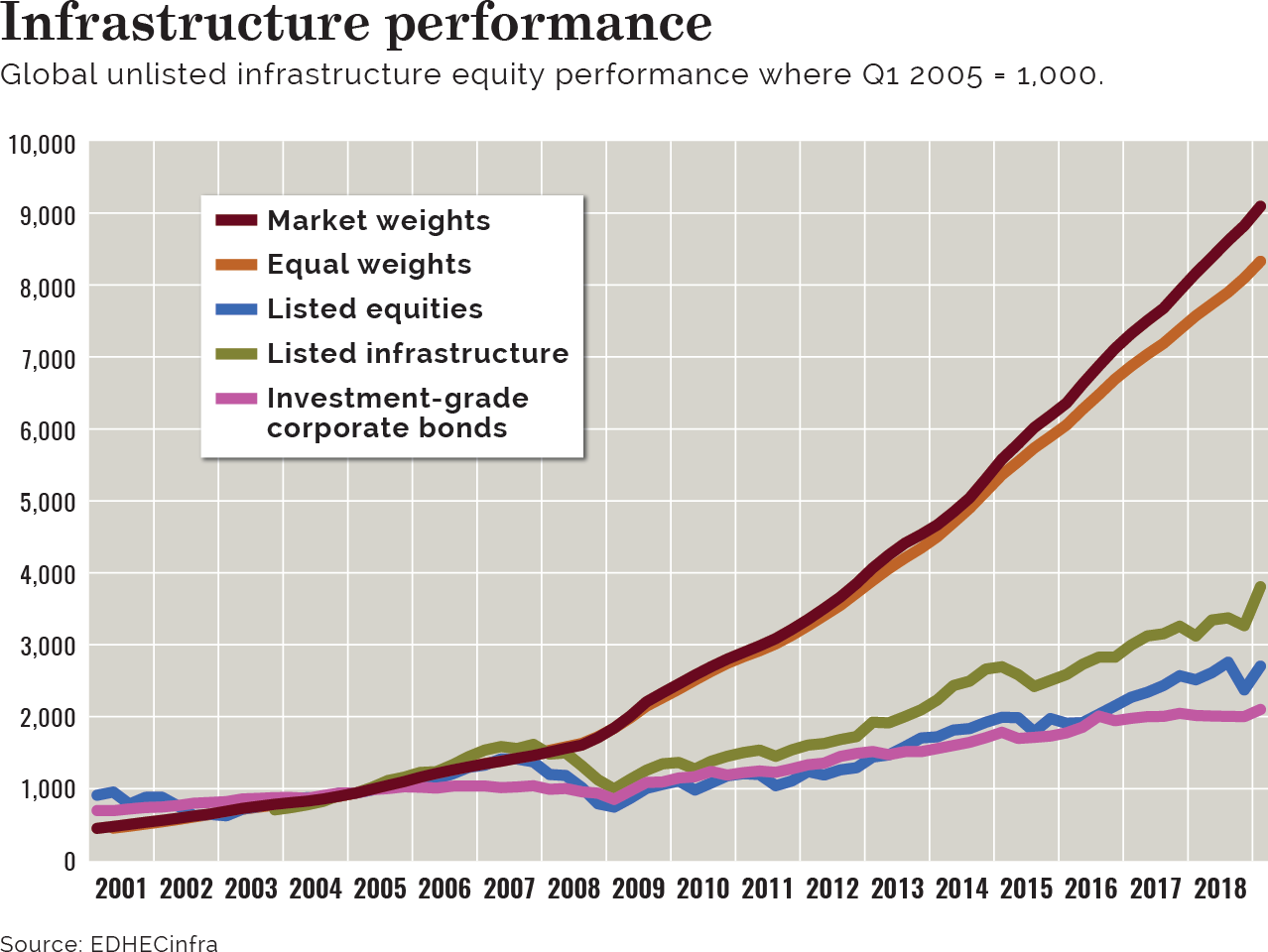 Coming up with a benchmark that would allow investors to assess relative outcomes has been "a challenge for a long time," so it will be interesting to see what EDHECinfra's dataset looks like, said Kyle Mangini, the Sydney-based head of IFM Investors Pty. Ltd.'s A$55 billion ($38.1 billion) unlisted infrastructure equity business.

The lack of a benchmark is "definitely not helpful," said Isabelle Demir, head of infrastructure with Melbourne-based investment consultant Frontier Advisors Pty. Ltd. Frontier has come up with its own benchmark index, based on the firm's surveys of roughly 50 infrastructure managers globally with about 60 funds, which "we guard very carefully," she said.

Spokesmen at IPD and Cambridge Associates didn't respond to request for comment.

A number of managers and asset owners see reason to hope EDHEC's indexes will provide them with needed tools in making and managing infrastructure allocations.

Pension fund investment committees are seeking appropriate benchmarks with attribution analysis, and EDHEC's indexes should prove "a helpful addition to the armory of things we all need to be getting more enduring and positive outcomes from allocations in infrastructure," said Ross Israel, head of Brisbane-based Queensland Investment Corp.'s A$11.3 billion global infrastructure business.

Today, a lot of public pension funds are using "consumer price index-plus" or absolute benchmark targets for their infrastructure allocations, which provide no indication of how investments are faring relative to peers, said Mr. Israel. "This is where the aggregation of data by EDHEC probably advances a more granular perspective on the asset class," and its performance, he said.

CDPQ's infrastructure holdings stood at C$23 billion, or 7.5% of the total portfolio, at the close of 2018, with plans to grow to 12% within five years.

Michael Weaver, the Sydney-based head of private markets with Sunsuper, a Brisbane-based superannuation fund with A$66 billion in retirement assets, said vetting EDHEC's benchmarks and database will take considerable time and effort on the part of his team — if things proceed to the point of getting the fund's executives and board to sign off on using them — but it could be worth the effort.

"It will be interesting to see what EDHEC ends up coming out with," but as a general proposition, "something like this is a step in the right direction — another sign of maturation of the asset class," Mr. Weaver said.

As of June 30, 2018, Sunsuper's infrastructure exposure — a combination of direct investments and investments through funds — amounted to A$3.54 billion, or 6.2% of its portfolio, an increase of 35% from the year before.

In the future, EDHEC is planning to offer an online tool allowing managers or investors to just key in their information to get a customized benchmark — since the broader index won't be investible. But for now, "you give me your weights, and I'll give you a custom benchmark," said Mr. Blanc-Brude. "Even if you have one asset, you're still exposed to systematic risk — to aspects of the rate of return which apply across the board to all assets, and to assets that are like that one," he said. Whether an investor has one or 10 assets, "you need to compare yourself to something that is representative of the kind of risks that you're exposed to," he said.

Infrastructure facing an era of risk

Concerns over environment a big priority with investors

Concerns over environment a big priority with investors