Commentary: The end of interest rate relief is coming

Low interest rates and the sunsetting of favorable funding rules will create significant increases in contribution requirements in the next few years. Congressional action early this decade protected plan sponsors from feeling the full effect of the current low-interest-rate environment, but that protection is set to phase out starting in 2021. It is critical that defined benefit sponsors understand future expected cash contributions so they can make plans now and avoid unpleasant surprises later.

Single-employer private-sector pension plans are required to determine minimum funding liabilities using yields on high-quality (A or better) corporate bonds. These rates are published by the IRS in a few different forms, but most plan sponsors use the three-segment yield-curve option that averages these corporate bond yields over a two-year time horizon.

The market collapse in 2008, combined with the plummeting of corporate bond yields starting in 2011, created significant contribution pressure for plan sponsors. Congress reacted by enacting a number of funding relief measures. One of these measures was so-called "interest rate stabilization." Sponsors using the two-year average yield curve would now additionally reflect the average of the last 25 years of corporate bond yields when valuing their minimum funding liabilities.

The practical implication of the relief was to limit interest rates to be close to their 25-year averages initially, with this limitation set to phase out over a few years. The first year the law was in effect — 2012 — a 10% corridor around the long-term average was used and was set to widen by 5% each year thereafter until it reached 30% in 2016. However, Congress extended the initial 10% corridor twice — first to 2017 and then again to 2020. The impact of this action has been "temporary" relief that has lasted seven years already and will only begin to phase out in 2021 (unless future legislation pushes it out even further). 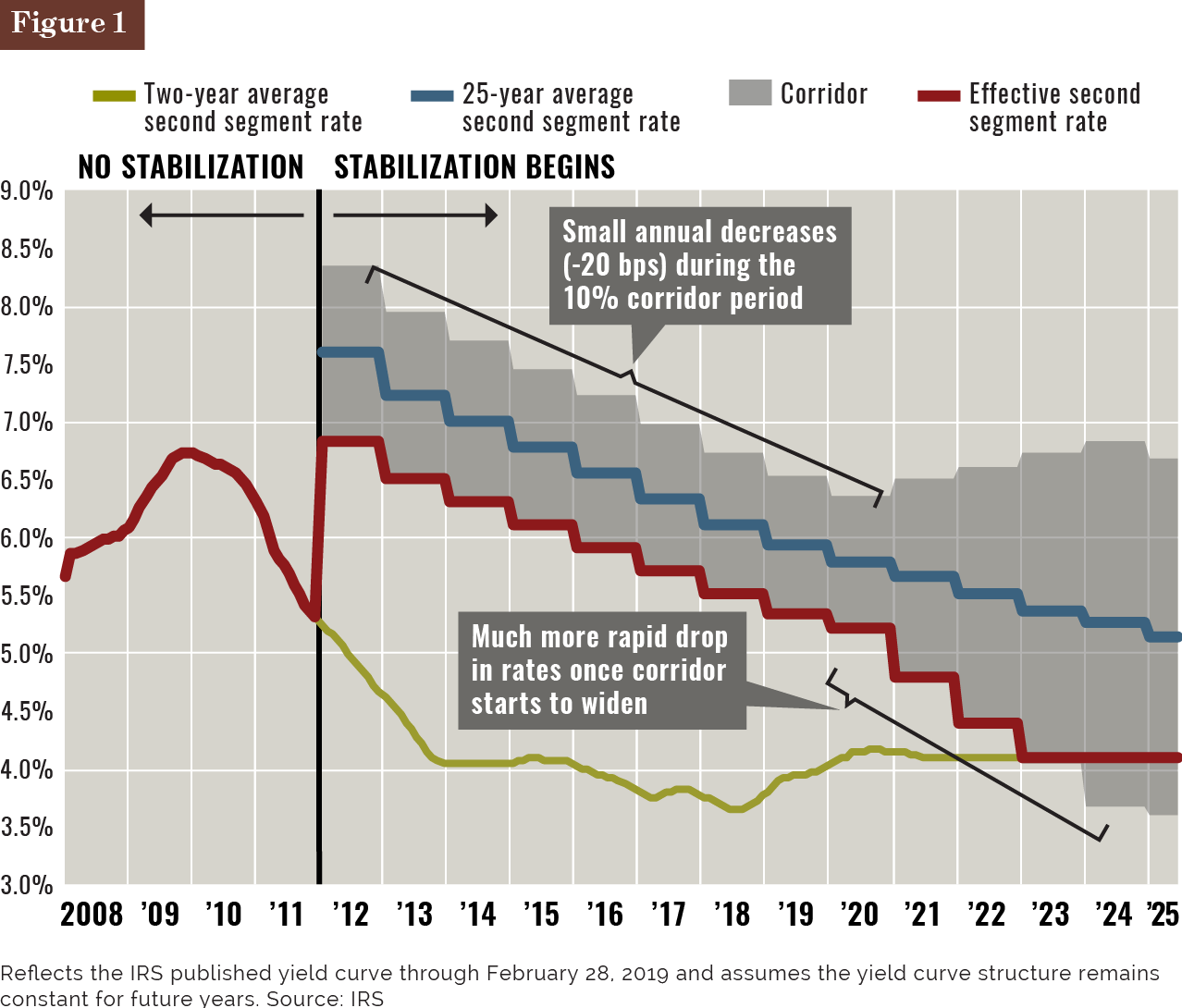 The bold red line shows the estimated effective rate sponsors actually used for determining their minimum funding liabilities. From 2008 through 2011, this rate was simply based on the two-year average rate, but in 2012 the effective rate jumped up to be 90% of the 25-year average — an increase of almost 2 percentage points. Since then, there have been small annual decreases of about 20 basis points in the effective rate as the relatively high interest rates of the 1990s are replaced by recent lower rates. These decreases in rates led to an increase in liabilities of 2% to 4% each year. While the increase is not desirable, it has been manageable, predictable and relatively consistent for much of the past decade.

Starting in 2021, when the corridor is set to widen and the 25-year average continues to drop, the pace of change will pick up significantly. Assuming rates remain at February levels, there will be a decrease in the effective rate of about 1.1 percentage points over the next three years. This magnitude of a rate drop during the period will lead to liability increases of 15% to 25%.

Interest-rate stabilization has affected pension plans in two key areas: contributions and plan administration. Pension plan sponsors are required to contribute a seven-year amortization of any unfunded liabilities plus the annual cost of benefit accrual and plan expenses. Therefore, any big increases in unfunded liabilities will lead to a big increase in required contributions. Plans that have had relatively stable minimum required contributions using stabilized interest rates will likely see their contributions increase significantly once stabilization ends. Depending on the characteristics of a plan's funded status today, it could result in contribution levels more than doubling in the coming years. Even plans that have become accustomed to being overfunded using stabilized rates may find that they suddenly have shortfalls and required contributions.

The second area that could affect pension plans is funded-status-related benefit restrictions. Pension plans whose adjusted funding target attainment percentage falls below 80% are restricted from paying certain types of benefits, the most common of these being lump-sum payments. Many plan sponsors find these benefit restrictions unacceptable and would rather contribute the necessary amount to avoid falling below the 80% threshold. With stabilized interest rates in effect, many sponsors have avoided the need to make these additional contributions, but that may change starting in 2021 when the stabilization starts to phase out.

When the Pension Protection Act was first passed in 2006, the intention was to get pension plans fully funded on a mark-to-market basis within seven years. Almost immediately, the financial crisis made this goal unattainable in the short term, and extremely low interest rates caused Congress to kick the can down the road even further via interest rate stabilization. However, barring further legislation, we will finally enter a seven-year full-funding regime, and sponsors that don't plan for it may find themselves with surprising cash requirements in the very near future. It is imperative for plan sponsors to understand the magnitude and timing of potential pension cash calls and to devise a strategy for dealing with them now.

Joe Anzalone and Michael Clark are directors and consulting actuaries at River and Mercantile Solutions, New York and Denver, respectively. This content represents the views of the authors. It was submitted and edited under Pensions & Investments guidelines, but is not a product of P&I's editorial team.

Cash is back in the fold as returns rise

Fed to keep rates steady for 'some time' – FOMC minutes