As target-date funds become more popular, prospective managers as well as existing managers are facing profit pressure from both peers and lower fee demands by sponsors.

"As the industry continues to mature, certain providers will say, 'Can we compete?'" said Jeff Holt, a Morningstar Inc. director and co-author of the firm's recently published analysis,"2019 Target-Date Fund Landscape."

Adding the next three managers — Capital Group Cos., J.P. Morgan Asset Management and TIAA-CREF — brings the combined market share to 87.4%. That means more than 30 other managers are fighting for the rest of the market. At year-end 2018, Morningstar reported the mutual fund target-date market had $1.09 trillion in assets.

So it's not surprising to Mr. Holt that some managers have acted accordingly. Between September 2018 and March 2019, five managers announced they were liquidating, merging or mapping their target-date strategies into other investment options. Three others eliminated target-date series in 2017.

Adding more target-date funds by existing managers contributed to the target-date series growth, according to Morningstar. "The providers appear less concerned about cannibalizing their own solutions compared to wanting to participate in the market," Mr. Holt said. In this case, participation often means offering a lower-cost target-date series. 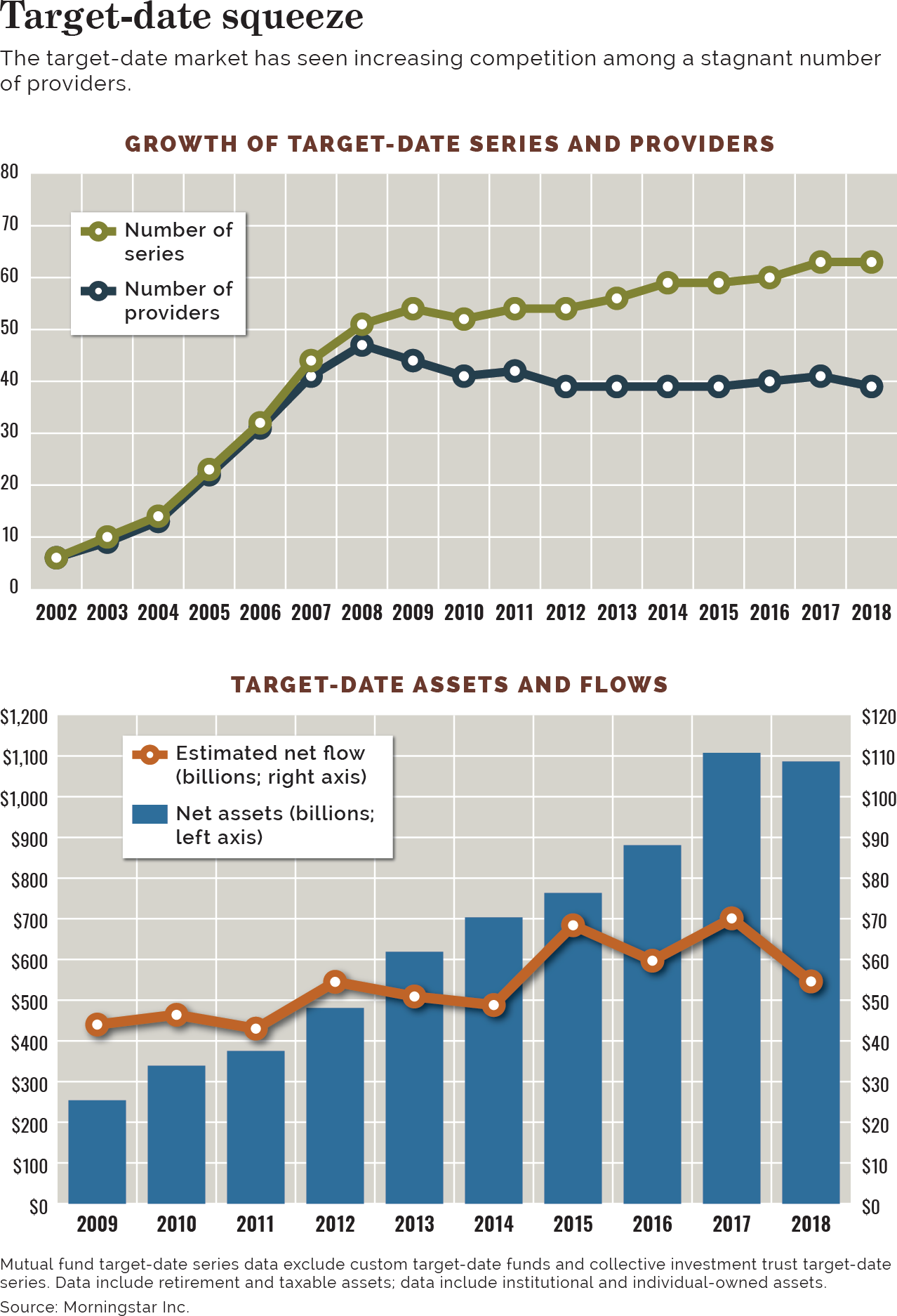 DC experts said the target-date market, especially in the retirement arena, can be challenging to enter and difficult to sustain. Because target-date funds play such a big role in qualified default investment alternatives, sponsors want managers with long track records because their QDIA assets are substantial.

When clients consider offering a target-date series, Callan LLC consultants generally look for a three-year track record for managers, said James Veneruso, a Summit, N.J.-based senior vice president and defined contribution consultant for Callan. "We don't want to put a client into something that would shut down in two years," he said.

To illustrate the role of target-date funds in DC plans, Mr. Veneruso pointed to the Callan DC index, which tracks 90 large sponsors with a total of $150 billion in assets. When offered, target-date finds account for 35% of a plan's assets on average.

"It's very difficult to break into this industry," said Winfield Evens, vice president for investments, solutions and strategies at Alight Solutions, Lincolnshire, Ill. The keys to a manager's initial success is at least a three-year track record and a client's willingness to offer the target-date series as a QDIA, he said.

New managers might have more success if they can convince sponsors that their target-date strategies differ from the rest of the pack. "It's tougher if you are offering me-too target-date funds," Mr. Evens said.

Recent dropouts from the target-date marketplace cited strategic evaluations as reasons for their decisions, or they offered no comment.

A March 29 prospectus filed with the SEC noted that the 10 funds within the BMO Target Retirement series would be liquidated on June 28. Amanda Robinson, a BMO Financial Group spokeswoman, declined to comment. The BMO target-date family had assets of $332 million last year vs. $352 million in 2017, according to Morningstar.

A Feb. 28 prospectus from MainStay Funds Trust, a New York Life Insurance Co. unit, reported to the SEC that the six components of the MainStay Retirement series would be mapped into four MainStay asset allocation funds in mid-June.

"We believe our asset allocation funds align with the goals and our commitment to meeting our shareholders' needs," a New York Life spokeswoman wrote in an email. The target-date family had assets of $640 million last year vs. $763 million in 2017, according to the Morningstar report.

When Pacific Investment Management Co. LLC announced in November it would liquidate its actively managed RealPath target-date series, a spokeswoman said PIMCO "regularly evaluates all of our funds to ensure they meet the evolving needs of our clients." Cutting this target-series, which was liquidated Feb. 22, was based on a "rigorous evaluation," she said. The series had assets of $107 million at year-end 2018, according to Morningstar.

PIMCO's RealPath Blend target-date series was unaffected. It had $410 million in assets at year-end 2018, according to Morningstar.

In November, BlackRock took over a target-date series offered by State Farm Mutual Automobile Insurance Co., in a merger of funds. BlackRock had been the subadviser to the State Farm LifePath series, which used the same strategy as the BlackRock LifePath Index series, said Nick Nefouse, managing director, head of defined contribution investment and product strategy and co-head of BlackRock's LifePath target-date business.

According to Morningstar, the State Farm target-date series had approximately $7.3 billion in assets in October, three weeks before the merger. The 2018 year-end total for the BlackRock LifePath Index series was $26.9 billion.

"The merger of our former State Farm LifePath Funds with similar BlackRock versions was part of moving our entire fund complex to BlackRock by shareholder proxy, so it wasn't specific to our target-date offering," said State Farm spokeswoman Anna Bryant in an email. "This activity resulted in existing customers realizing lower costs in the form of decreased fund expenses, and was joined by a significant expansion of the number of mutual funds in which customers can invest."

In October and December, the Virtus Retirement Trust liquidated all of the funds in its Virtus DFA Target Date Retirement Income series. "We carefully evaluated multiple factors, including an assessment of each product's asset levels and market demand," Joe Fazzino, a spokesman for Virtus Investment Partners Inc., wrote in an email. Virtus "determined it would be in the best interest of fund shareholders to liquidate the funds. None were mapped to other funds."

According to Morningstar, the Virtus target-date series had of $17 million in assets in September.

The biggest players aren't immune from target-fund marketplace struggles. In December 2017, Fidelity liquidated its multimanager target-date series. The company's SEC filing gave no reason and a spokesman declined to comment. However, also in 2017, the company introduced the new Fidelity Flex Freedom target-date series.

Industry aims to build on things that already work

Tackling the issue of lifetime income

WakeMed settles with 403(b) plan participants over alleged fiduciary violations