Managers bashed by worst decline in the past 10 years

Money managers experienced the worst aggregate decline in worldwide institutional assets under management in a decade during the year ended Dec. 31.

All but one of the 10 largest firms in P&I's ranking of the largest institutional managers worldwide produced AUM declines ranging from 1.46% to 10.65% in the year ended Dec. 31.

Prudential Financial Inc., Newark, N.J., was the lone company within the top 10 to produce a gain in worldwide institutional assets in 2018. Assets managed by PGIM, the firm's investment management unit, rose 0.74% to $1.04 trillion. The gain propelled Prudential to seventh place from 10th the prior year.

"The bulk of the exposure of the largest money managers to market declines was from equities," she said, adding that continued inflows to passively managed strategies, especially to equities, also sapped assets away from active strategies. 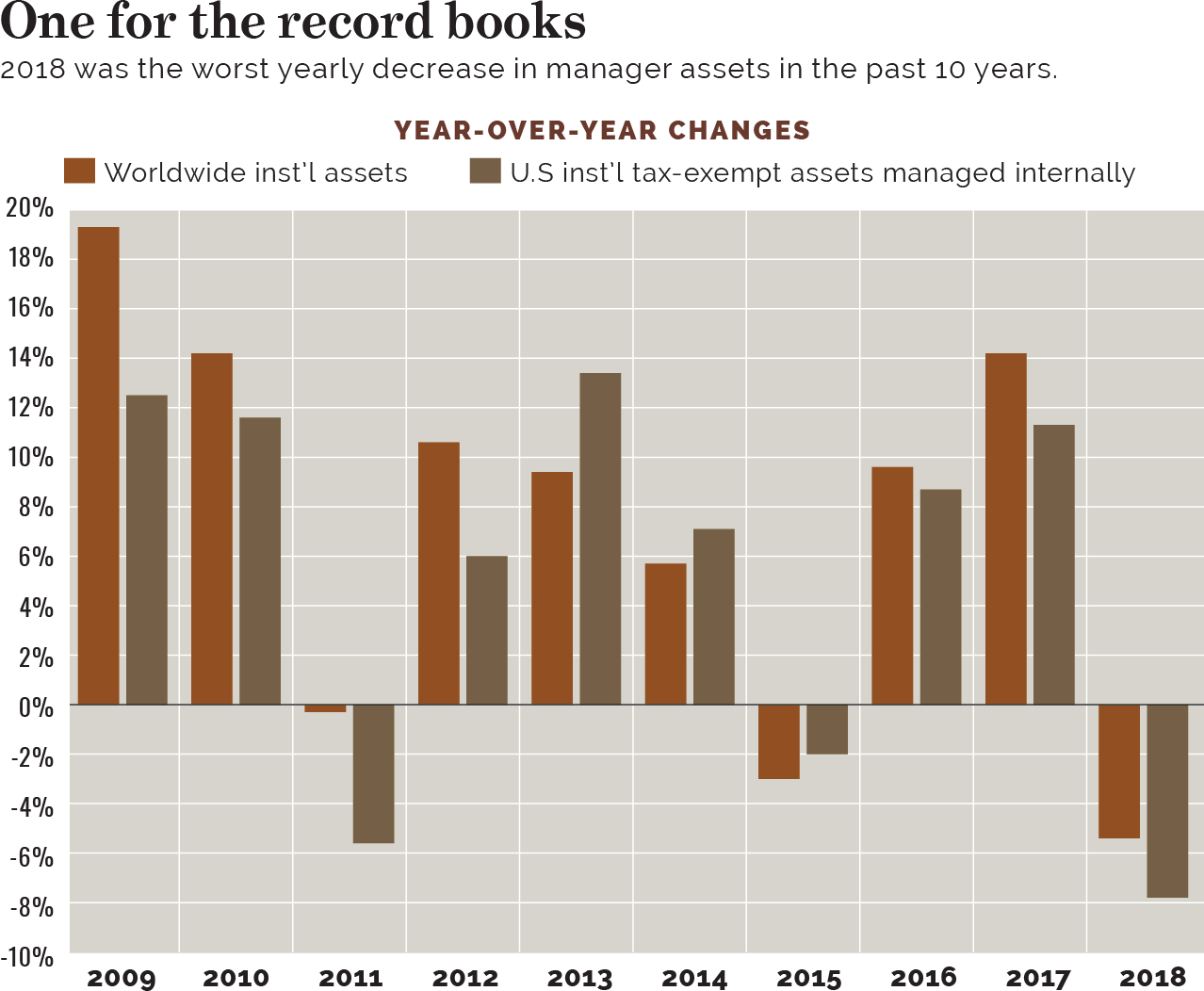 The same three megamanagers remained at the top of P&I's list of the largest managers of worldwide institutional AUM as of Dec. 31, despite each experiencing asset losses.

BlackRock Inc., New York, kept a firm but shrinking position as the world's largest manager of institutional assets with $3.62 trillion as of Dec. 31, down 6.7% from the prior year.

Assets managed for worldwide institutional investors by Vanguard Group Inc., Malvern, Pa., declined 1.46% to $3.06 trillion, with the firm keeping its second-place position. Vanguard further eroded the gap between its worldwide institutional AUM and BlackRock's, shrinking the difference to $567 billion in the year ended Dec. 31, from $781.8 billion at the end of 2017 and $899.7 billion in 2016.

Sources attributed much of the AUM decline of managers with high exposure to non-U.S. markets to market depreciation and the impact of currency movements in the year ended Dec. 31.

"The decline in assets under management in 2018 is understandable, driven as it was by returns," said Davis Walmsley, managing director-investment management at Greenwich Associates LLC, Stamford, Conn., a financial industry research firm.

Mr. Walmsley added: "We haven't seen much new money coming into the industry except from performance. As corporations continue to derisk their pension funds, AUM is declining."

Among the strategies with the highest growth in worldwide assets under management in the year ended Dec. 31:

The growth in assets managed in LDI approaches is "quite significant on top of market moves last year, and there also was a fair amount of growth in other fixed-income strategies," said Willis Towers Watson's Ms. Nikulina

NISA Investment Advisors LLC, St. Louis, not only had the highest AUM growth — 16.8% to $170.5 billion — among the 25 largest managers of internally managed U.S. institutional tax-exempt assets as of Dec. 31, it also experienced strong growth in worldwide LDI assets of 14.69% to $143.1 billion.

NISA was "in a position to profit" from an ideal environment for growth in its LDI strategies in 2018 as corporate plan sponsors derisked their plans by harvesting equity gains from strong markets through the third quarter and moving them into LDI strategies, said David G. Eichhorn, president and head of investment strategies.

Another source of net inflows into LDI strategies in 2018 was the big wave of pension contributions as corporations raced to take a 35% tax deduction by Sept. 15 in advance of the lower deduction rate decreed by the Tax Cuts and Jobs Act, Mr. Eichhorn said.

Drilling down into data from money managers about their U.S. institutional clients exposed the same pattern of AUM declines in each of P&I's primary client categories in the year ended Dec. 31.

U.S. institutional tax-exempt assets managed internally were down 7.8% to $14.19 trillion, compared to an increase of 11.3% in the prior year.

As with worldwide institutional assets under management, the aggregate decline in AUM managed internally for U.S. institutional tax-exempt investors in 2018 was the worst in the 10 years ended Dec. 31 and the third drop in that span — AUM fell 5.6% in 2011 and 2% in 2015. 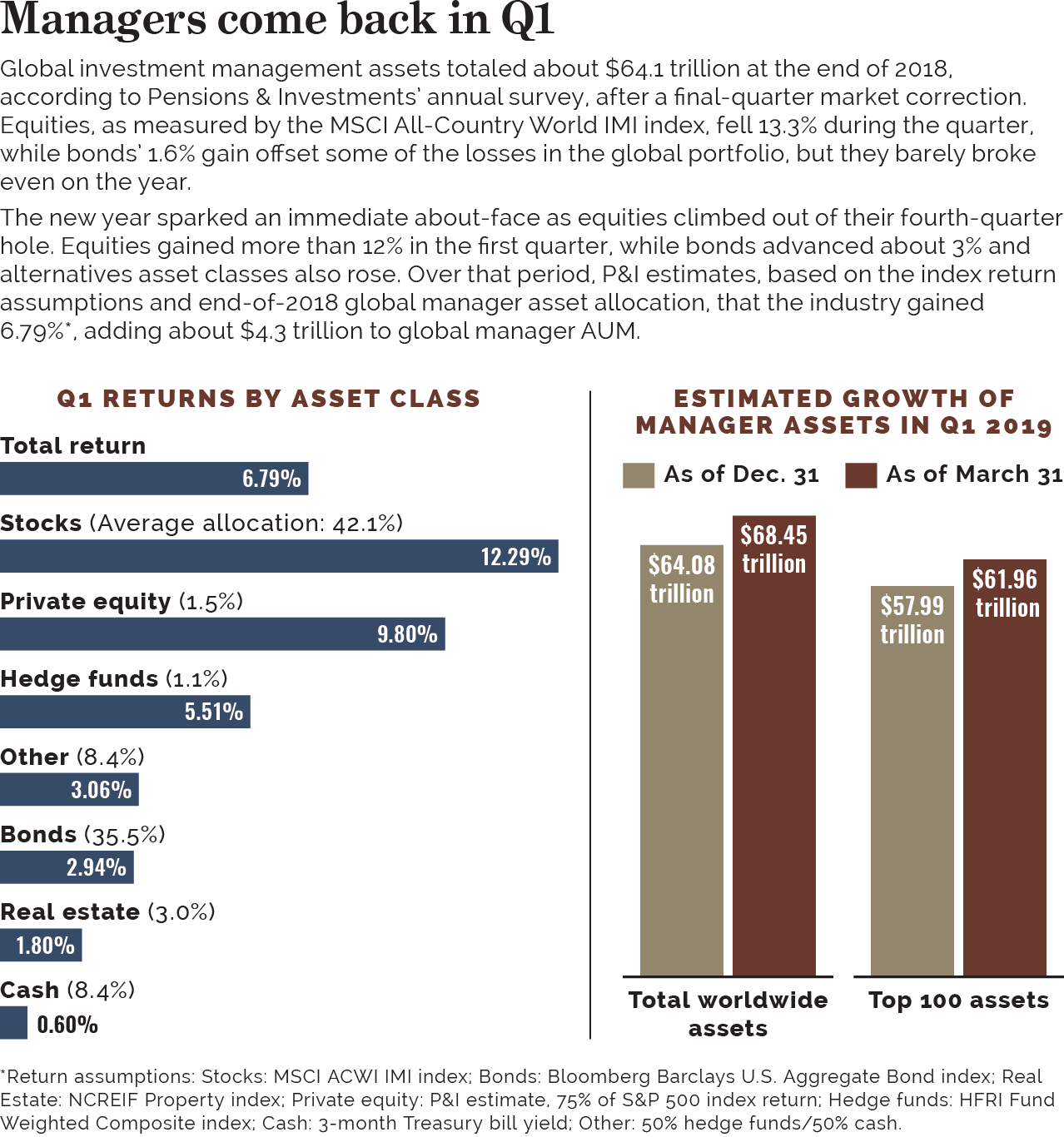 No changes at the top

The triad at the top of P&I's worldwide institutional AUM ranking retained their positions for internal management of U.S. institutional tax-exempt assets, with BlackRock at $1.41 trillion, down 8.1% compared to the prior year; Vanguard Group, up 0.64% to $1.21 trillion; and SSGA, down 10.99% to $857.7 billion. Vanguard was one of four managers in the top 10 to record an increase in AUM in 2018.

Aggregate assets of every traditional equity strategy internally managed for U.S. institutional tax-exempt investors in P&I's universe, both passive and active, declined in the year ended 2018.

Fixed-income strategies, on the other hand, experienced modest growth in most internally managed subasset classes, with active international fixed income up 4.8% to $371.2 billion; indexed U.S. bond strategies up 3.9% to $774.5 billion; enhanced indexed U.S. bonds up 3.6% to $81.8 billion; and inflation-protected securities up 2.7% to $126.3 billion.

Mr. Hyat credited the firm's 0.74% growth in assets managed worldwide for institutions to a net inflow of $13.7 billion — the firm's 16th consecutive year of net inflows — driven by strong interest diversifying strategies such as fixed-income relative value, real estate debt and all forms of private credit.

"The backbone of our success is the performance of our strategies, which is our primary objective," Mr. Hyat said, noting that 92% of PGIM's benchmarked strategies outperformed over the five-year period ended Dec. 31.

One reason for that hesitation may be the chronically underfunded status of many U.S. public defined benefit plans, he said.

Fourth-quarter market plunge pulls most firms down for year

How to find the Money Managers data online