U.S. public pension plans continue to reduce their return assumptions. With the 10-year economic expansion slowing across the globe, this makes sense. But since lower return assumptions mean higher valuations for liabilities, the downward revisions tend to be incremental, raising the question of whether even these new, lower numbers will be achieved. And if it looks like the current asset mix is unlikely to hit the target, are there any adjustments that might bring the plans closer without adding unnecessary risk?

To explore these questions, we recently analyzed a representative group of public pension portfolios. We found that the gap between assumed and expected median returns is narrowing but still significant. At the same time, our work also points to practical steps many plans could take to close the gap in a prudent way — building resilient portfolios that are positioned for potential growth while mitigating downside risk.

For our study, we analyzed the portfolios of 55 state and local funds representing $2 trillion in assets and ranging in size from $3 billion to $224 billion. (See Figure 1 for details.) Working with data gathered by Pensions & Investments, we used BlackRock's Aladdin platform to map the portfolios to our most recent capital market assumptions and estimate their expected risk and return characteristics. We then organized the results according to different plan characteristics, to see what trends we could uncover and identify lessons that plans could learn from their peers.

It wasn't a huge surprise that a majority of these plans have a gap between their own assumed returns and the expected return for their portfolios based on BlackRock's capital market assumptions. Comparing the two for each plan, we found that about 70% of the plans may miss their mark over the next 10 years. If this came to pass, however, it would actually be an improvement on the record of the prior 10 years, when realized returns fell short of the 2017 assumptions for all but one of the plans, and half the group missed by 200 basis points or more.

Some caveats: Our dataset gave us the plans' allocations as of 2018 but assumed returns as of 2017, so we missed the effects of any recent reductions in return assumptions. Also, BlackRock's assumptions are median or beta estimates and don't take account of any potential alpha the plans may capture. Still, we think our findings are illuminating.

As Figure 2 illustrates, the projected gaps are not uniform; nor are the return assumptions. While the average assumed rate of return is 7.25%, the range (excluding an outlier) runs from 6.5% to 8%. Note, however, that a higher assumed rate of return need not imply a projected shortfall. Plans can elevate their expected returns by increasing the growth assets allocation or changing its composition. The difficulty, of course, lies in targeting those additional returns without breaking the risk budget — because as risk rises, so does the possibility that those higher "expected" returns won't be achieved.

We can clearly see this challenge in our sample group. Fifteen of the plans have expected returns of 7.25% or higher. For this cohort, the average level of risk (defined as standard deviation) is 12.5% — more than 110 basis points higher than the 11.4% average risk for the group as a whole. The key question for these plans is whether they are being adequately compensated for the additional risk. 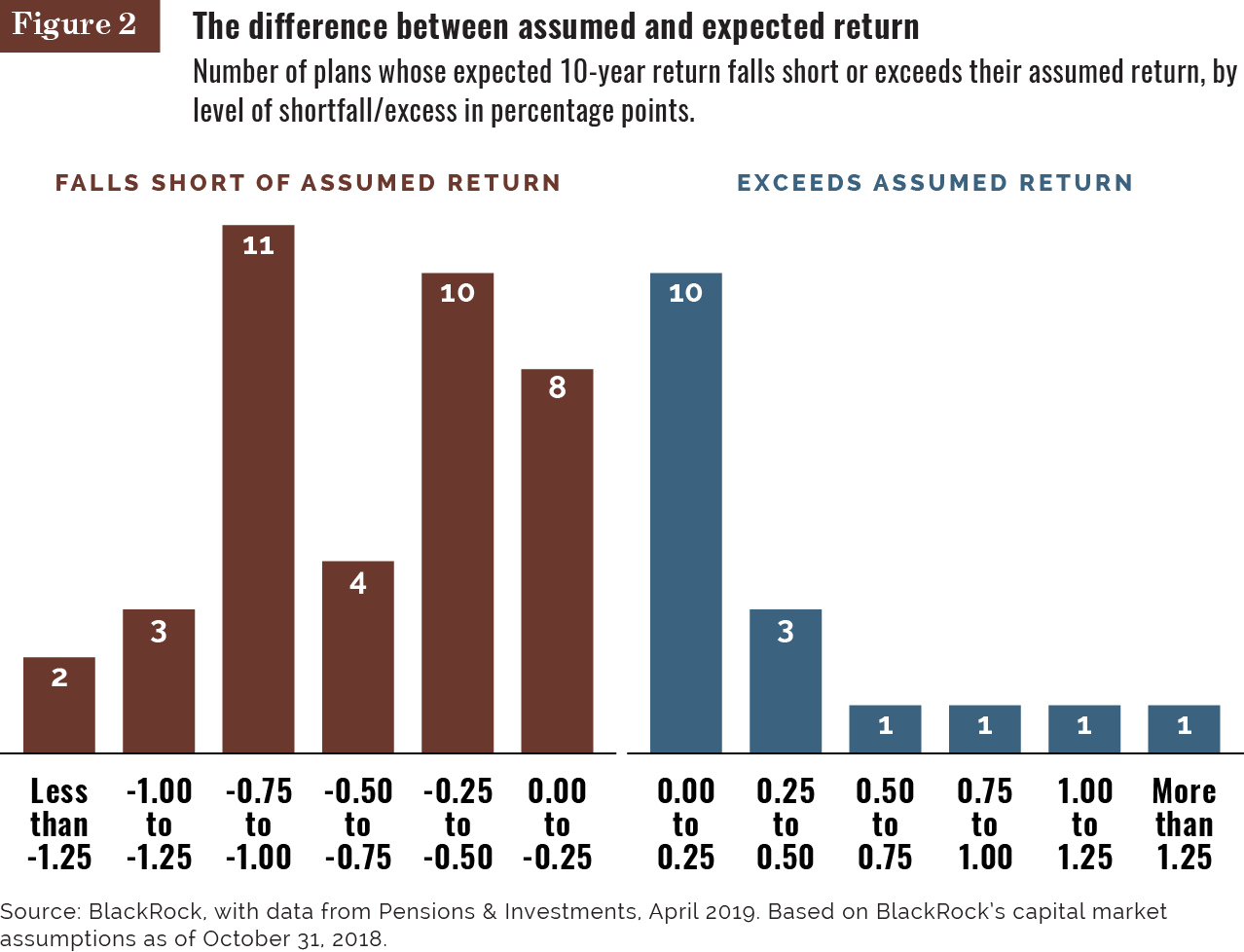 Regardless of size or funded status, most of the plans in our study have about three-quarters of their portfolios invested in equities and alternatives, which we group together as growth assets. Where they differ is in the composition of those growth allocations, as reflected in Figure 3.

Is the strong performance of U.S. equities over the past decade partly responsible for the higher funded status of the latter group? Did underperforming non-U.S. equities and hedge funds play a role in the lower funded status of the former group? Separating cause and effect requires historical data on individual plans. But the most important question is about the future.

Based on these allocations, BlackRock's capital market assumptions indicate that both cohorts are likely to fall short of their average assumed rates of return, and by similar margins of about 45 basis points, again excluding an outlier. The highest-funded cohort, moreover, has an expected return of 6.68%, below the 6.92% average for the study group as a whole, and is taking slightly more risk than average to target that return. The driver here is our modest outlook for U.S. equities. If plans in this cohort haven't done so already, they should rethink their positioning. 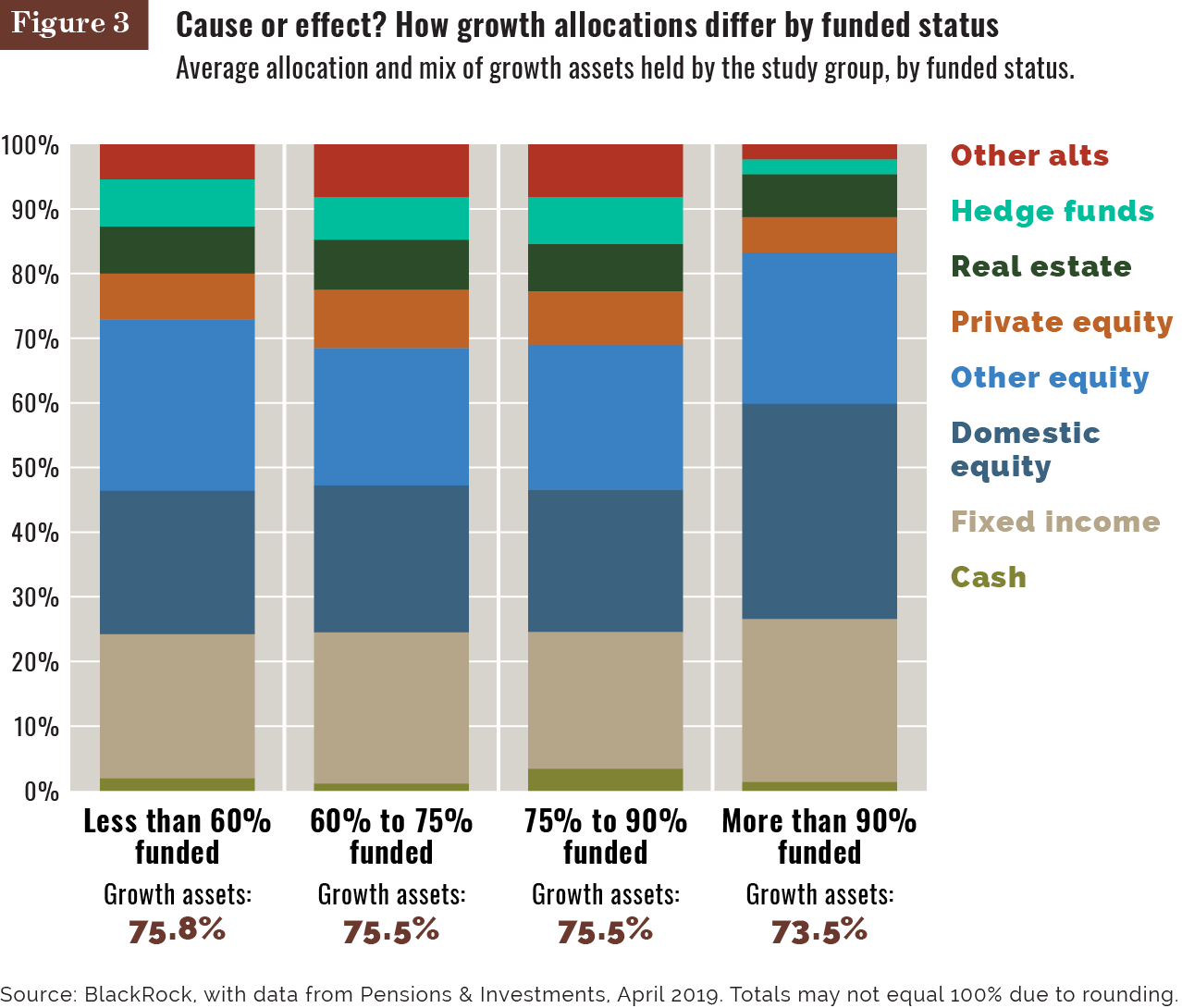 With growth assets in particular, risk is a key input in allocation decisions. Plans need to know not only how much risk they are taking, but also its factor composition and whether they are being adequately compensated for accepting it. The average 75% allocation to growth assets for our study group implies that these plans are, on average, heavily exposed to the economic growth risk factor.

As Figure 4 shows, exposure to the economic growth risk factor accounts for more than 70% of the total risk the plans are shouldering. The potential downside is significant. Our modeling indicates that a 15% drop in the S&P 500 could result in an average 11.8% drawdown — a major setback for these plans.

But here, too, the average doesn't tell the whole story. When comparing individual plans in our study group, we note one pair with the same amount of total risk, but the expected return for one of them is almost 60 basis points higher than the other. A more diversified portfolio is the reason. Looking at the group as a whole, we have identified several other opportunities to improve diversification, either to reduce risk with little sacrifice in expected returns, or to improve expected returns without adding significantly to risk.

With the 10-year economic expansion slowing across the globe, building a more resilient portfolio to generate returns while buffering against volatile markets is critical. Many of the plans have relatively light allocations to traditional fixed income, which (thanks to interest rate normalization) appears to be regaining its role as a diversifier of equity risk. Additionally, factor-based strategies have the potential to diversify economic growth risk while still generating returns. 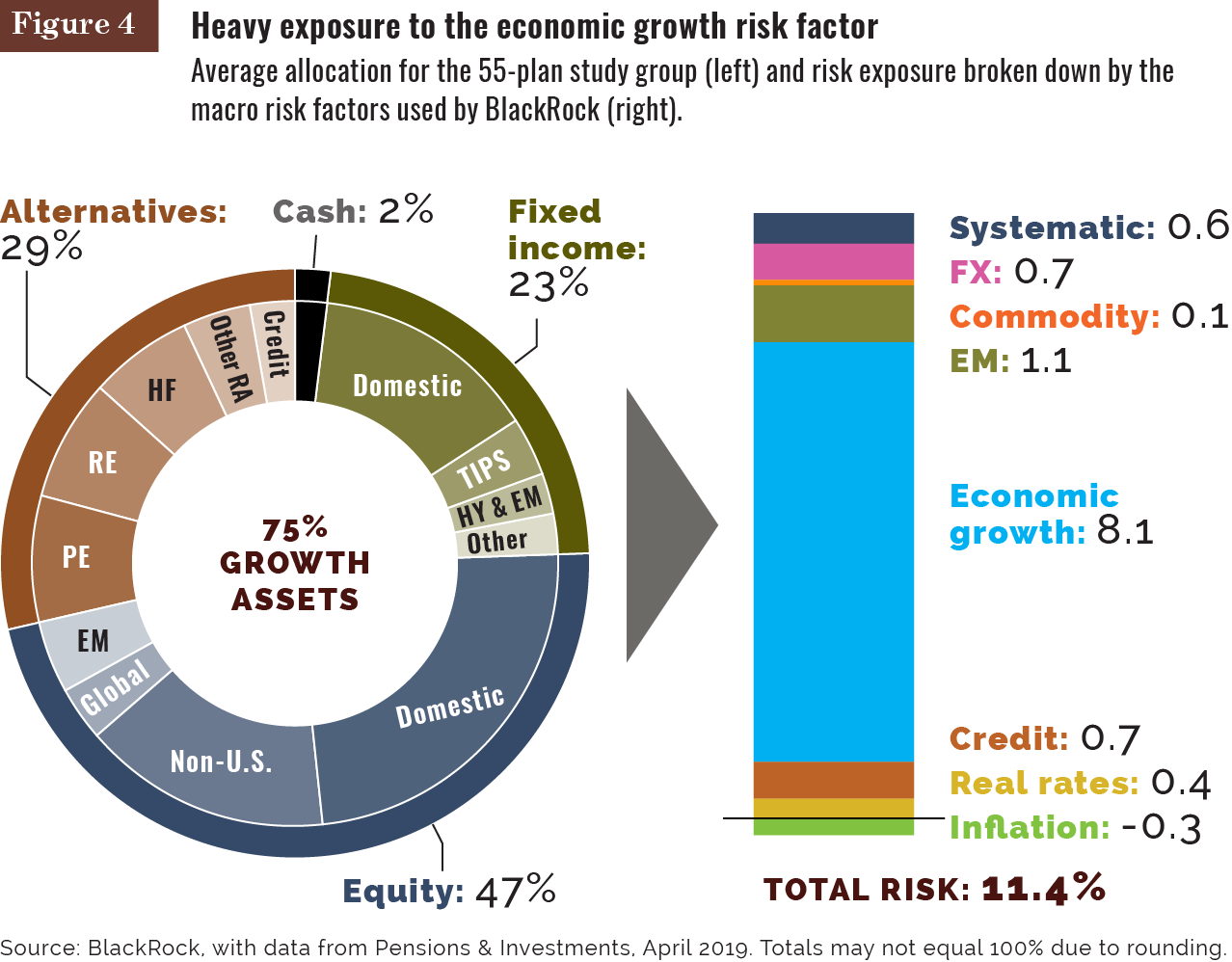 There is, of course, no single solution for these plans, much less for public pension plans in general. But incremental improvements in different areas can add up, bringing plans closer to their goals as they compound over time. And we know of no better way for plans to discover what levers they might want to pull than by learning from their peers and viewing their portfolio through a risk and factor lens.

Sunil B. Shah is head of the client insight unit at BlackRock Inc., based in San Francisco. Jonathan Cogan is a vice president and Ben Ho is an associate, based in New York and San Francisco, respectively. This content represents the views of the authors. It was submitted and edited under Pensions & Investments guidelines, but is not a product of P&I's editorial team.