When it comes to defined contribution plan design and management, money isn't everything, says a new survey of DC consultants by Pacific Investment Management Co. LLC.

Costs and fees rank high among the concerns of the consultants and their clients, but other issues such as target-date fund glidepaths have emerged as topping to-do lists, especially in areas that focus on decumulation, said the annual survey, released April 15.

"It is fair to ask if we have seen the high-water mark related to the focus on fees — with plan sponsors now having appropriate governance mechanisms in place," said the report, describing the comments of 32 consulting and advisory firms. Together, the firms serve more than 3,750 DC clients with ag- gregate assets of more than $4 trillion.

"Consultants indicate client focus has shifted, with reviews of the target-date fund now the highest priority, followed by evaluation of plan cost and simplification of investment menus," the report said.

For example, one question asked: What are the most important factors in evaluating and selecting investment default strategies? Glidepath structure placed first (82% of responses), followed by fees (56%) and probability of meeting retirement income objectives (47%). Multiple answers were permitted. 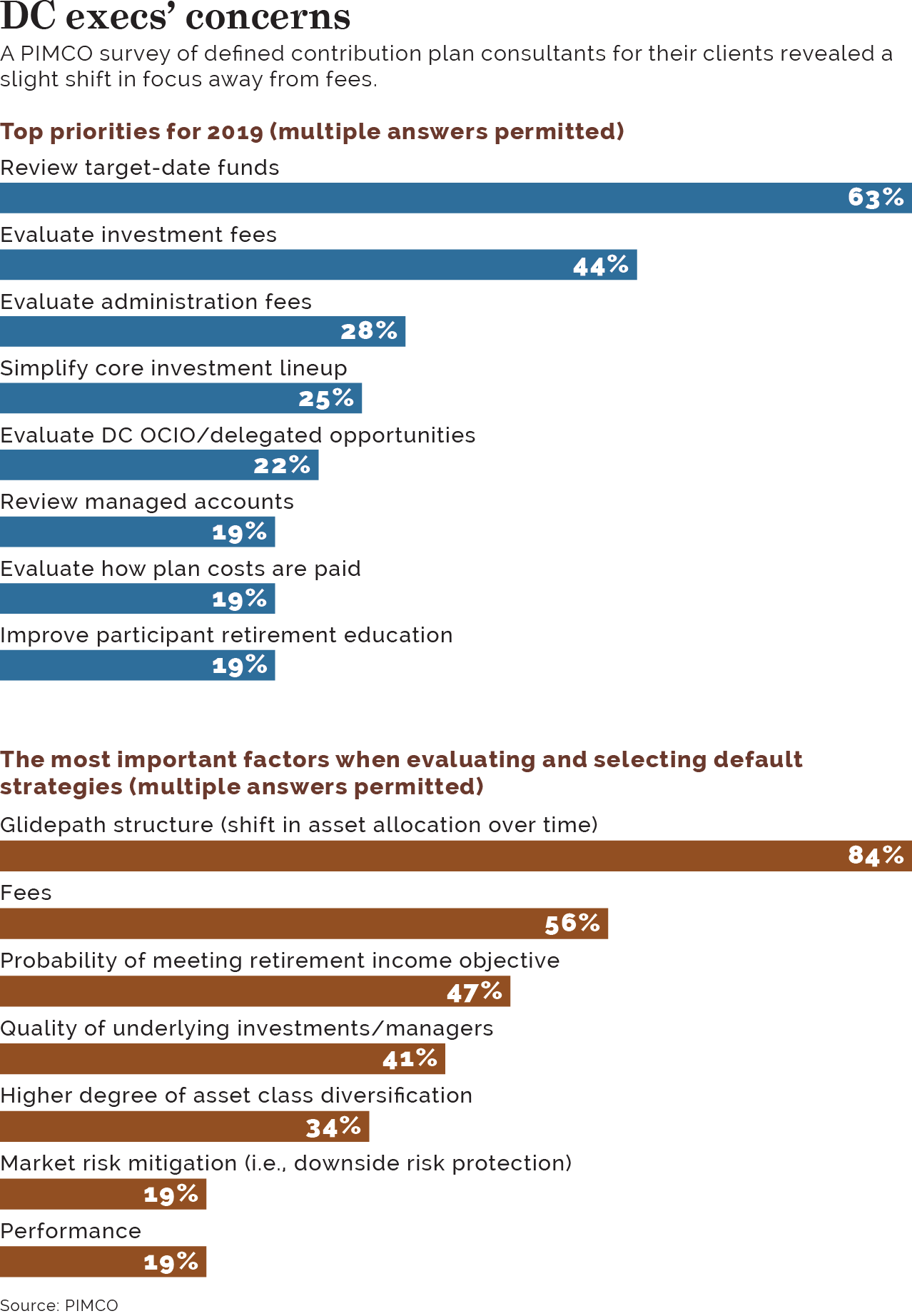 "It all comes back to the focus on retirees," Mr. Fulford said, adding that a lot of the work has already been done in fee reductions.

He pointed to another survey result to augment his comments. When consultants were asked what were their clients' top three priorities, reviewing target-date funds was the clear leader (63%), followed by evaluating investment fees (44%) and evaluating administration fees (28%). The question offered 21 choices.

"There's greater scrutiny (among sponsors) as to whether their target-date funds are appropriate for retirees from a risk perspective," Mr. Fulford said. "Do they serve the needs of retirees?"

Mr. Fulford also noted that DC consultants reported a greater interest among clients in encouraging departing participants to keep their retirement accounts in their plans.

Based on anecdotal information, Mr. Fulford said the desire for asset retention "is even higher when you ask sponsors themselves."

To further encourage retirees' asset retention in the plan, consultants told PIMCO that 84% of clients offer some form of distribution flexibility, such as partial and installment payments.

Offering such flexibility combats the all-or-nothing approach that plans offered their retirees in the past, Mr. Fulford said. The survey also found that 41% of sponsors offer retirement education or retirement tools to help retirees manage their accounts. And 38% have offered retiree-focused investment options, also known in industry-speak as a retirement tier.

For example, the PIMCO survey asked consultants which investment options they would most likely recommend to clients as retirement income options. Among a dozen choices, at-retirement target-date funds and at-retirement target-date funds with a distribution/payout focus were the most recommended. A multiasset payout strategy, managed accounts and capital preservation options — such as stable value, money market funds and short-duration bonds — also were popular.

Ironically, consultants expressed skepticism about managed accounts. In a series of survey questions:

Only 6% "strongly agreed" that participants provide the necessary information so that managed accounts could provide a personalized assessment, 31% said they somewhat agreed. Forty-seven percent strongly or somewhat disagreed.

Six percent strongly agreed that the cost of managed accounts was justified based on their more personalized portfolios and anticipated risk-adjusted performance, while 25% said they somewhat agreed. Fifty-three percent strongly or somewhat disagreed.