Stock buybacks must not be strangled

Stock buybacks are on a tear. But they're not without controversy. Share repurchases are a valuable corporate finance tool for companies. They also provide flexibility for asset managers acting on behalf of the asset owners and for individual shareholders, both of whom can tender their shares to build cash positions or reallocate their assets later at a time that suits them.

That said, the practice has long drawn scrutiny given some fears that stock buybacks increasingly are being used by executives to cash out, rather than to increase long-term shareholder value or for corporate investments. In the most recent move to legislate a fix for this perceived problem, Sens. Charles Schumer and Bernie Sanders have said they plan to introduce a bill to put restrictions on companies' ability to buy back shares.

They argue that repurchases take corporate cash that should be invested in productive assets by the companies or given to employees in higher wages, and give it instead to top management and shareholders.

Research on the merits or drawbacks of the practice can be found to support both views, but in any case, action on this bill should not be rushed.

A 2017 paper by Clifford Asness, Todd Hazelkorn and Scott Richardson, all of AQR Capital Management LLC, examined evidence for the prevailing negative beliefs about share repurchases, and found evidence for them lacking.

"Aggregate share repurchase activity has not been at historical highs when measured properly, and when netted against debt issuance is almost a non-event, does not mechanically create earnings (per share) growth, does not stifle aggregate investment activity, and has not been the primary cause for recent stock market strength. These myths should be discarded."

A more recent study by Professor Craig M. Lewis of Vanderbilt University made the case that a share repurchase "is a highly efficient way to distribute cash to shareholders."

Mr. Lewis noted that cash paid to shareholders does not disappear but is either spent on goods and services or reinvested elsewhere.

Mr. Lewis also found that, on average, firms have been able to invest in new projects, pay dividends and repurchase shares without constraint.

He disputed that share repurchases disproportionately benefit the wealthy, noting that given the importance of equity in retirement planning, almost all investors benefit from rising share prices.

It's fair to say that even with such research at hand, institutional investors still have concerns. Regulators, too, are paying attention.

Last year, Securities and Exchange Commissioner Robert Jackson Jr. called for the agency to pay greater attention to the growing number of corporate stock buybacks, a move that was being watched closely by institutional investors, including those who have been calling for at least more disclosure about companies' motives and methods.

Mr. Jackson's staff studied 385 buybacks over the past 15 months and matched those actions to executive stock sales available in SEC filings. They found a jump in stock price of more than 2.5% in the 30 days after the buyback announcements.

In December testimony before the Senate Banking Committee, Mr. Clayton called for more disclosure by companies to explain in financial reports how they're going to spend money on plants, property and equipment. "In this economy, we should be driving disclosure toward human capital, intellectual property, supply chain management and relationships with vendors," Mr. Clayton said.

He also said that whether the SEC would press for more disclosure on buybacks depends on their relation to executive compensation. If so, companies should be responsible for determining whether they have appropriate compensation guidelines.

"If the motivation is driven by a compensation scheme, I think that's something compensation committees ought to be looking at," Mr. Clayton said.

If Messrs. Schumer and Sanders persist in their efforts to restrict the ability of companies to repurchase shares, institutional investors should resist with all their power and influence. Determining the merits of a buyback ought to reside with the board of directors, which has a fiduciary duty to protect interests of shareholders. If that duty is violated, existing law should be used to address it.

A blanket rule restricting the flexibility of all companies to correct the misbehavior of a few is foolish and likely would result in painful unintended consequences. 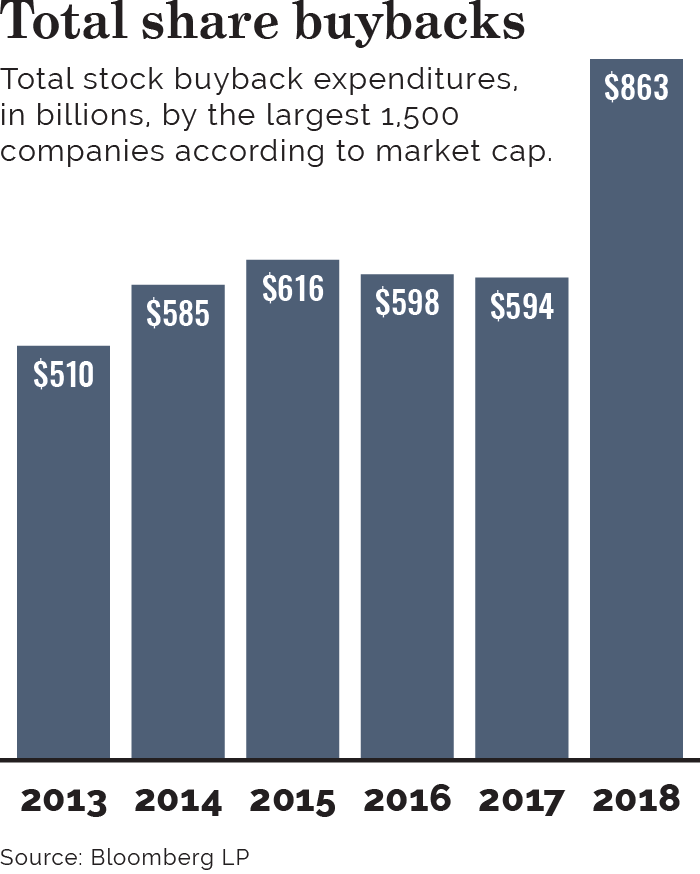 Bipartisanship to be key to change in Washington

Stock crowding risk is back with everyone buying the same thing