Some of the biggest names in revenue growth, profit progress and market cap gains are also moving up in another financial category — defined contribution assets.

The DC plans of these companies — the famous, and sometimes infamous, FAANG stocks — won't be challenging their largest peers any time soon because the Federal Thrift Retirement Plan, Washington, has $578.8 billion in DC assets, according to the latest Pensions & Investments survey of the 1,000 largest retirement plans. Long-established DC plans of AT&T Corp., Dallas, ranked second with $65.5 billion, and Boeing, Chicago, ranked third with $64 billion, seem far away in the asset horizon — for now.

However, some of these youngsters are advancing quickly in the P&I ranking of DC assets among the largest retirement plans.

The reasons are varied but a common theme is booming employment. Facebook Inc., for example, doubled its full-time workforce between 2016 and 2018. So did Netflix Inc. Amazon.com Inc. nearly doubled its combined full- and part-time workforce during this period. Alphabet Inc., parent of Google, recorded a 38% increase in full-time employees. Apple Inc. added 14%.

Beyond raw numbers, however, the FAANGs take different approaches to managing their DC plans, including some with an aggressive approach to auto-enrollment. The plans of Alphabet and Facebook, for example, set initial auto-enrollment deferral rates at 10%, well above the more common rage of 3% to 6% at many DC plans. Participants may opt out.

Alphabet, Mountain View, Calif., achieved its DC asset growth without providing a company stock fund in its 401(k) plan, although it offered a self-directed brokerage account for its 98,771 full-time employees as of Dec. 31.

There is immediate vesting for participants' and company contributions.

(When compared with the P&I universe of total retirement assets — defined benefit and DC — Alphabet placed 194th in this year's survey, up from 293rd in the previous survey.)

For all its growth, Amazon.com Inc., Seattle, has a comparatively small — but surging — amount of DC assets.

The estimated total of $4.8 billion for the current P&I survey represented a 51.3% jump from the previous survey, as Amazon moved to 207th place from 287th for the most DC assets. (Among all retirement plans, DC-only Amazon placed 414th, up from 544th).

Full-time workers can contribute to their 401(k) plan immediately. Part-timers who work less than 30 hours per week can contribute once they have completed 1,000 hours or more, according to the company's latest Form 5500.

The company match is 50% for each dollar up to 4% of a person's annual pay. Vesting is immediate for participants' contributions but three years for company contributions. 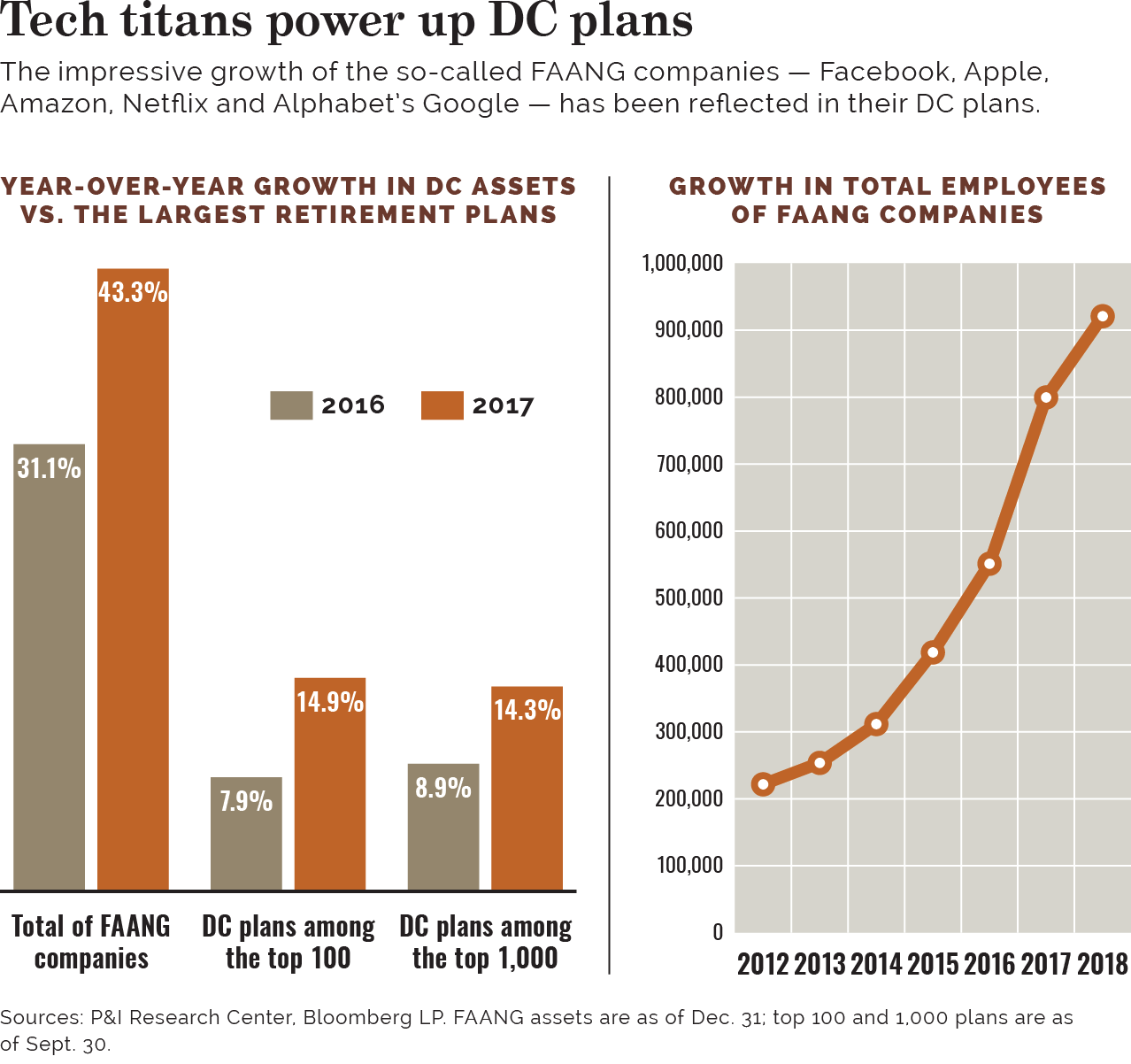 Apple doesn't have a stock fund in its 401(k) plan, although it does have a self-directed brokerage account.

The company auto-enrolls people at 3% of annual salary and offers automatic escalation of 1% of salary per year up to a combined total of 6%. Employees may opt out.

Apple uses the corporate match to reward tenure. For someone who has worked for less than two years, the company match is 50% on the dollar up to 6% of annual salary. For someone who has worked two to five years, the match is 75%, and an employee who has been with Apple for five or more years is eligible for 100% match. Vesting is immediate for the 132,000 employees as of Sept. 30.

The defined contribution plans of Facebook Inc., Menlo Park, Calif., and Netflix Inc., Los Gatos, Calif., were too small for the latest P&I survey of the largest 1,000 retirement plans; the cutoff was $1.31 billion.

Facebook doesn't have a stock fund in its 401(k) plan, although it offers a self-directed brokerage. The company raised its auto-enrollment initial deferral on Jan. 1, 2017, to 10% of annual salary, up from a still aggressive 7%. Employees can opt out.

The company also encourages saving via a corporate match — 50 cents on the dollar up to 7% of annual pay. Vesting is immediate for individual contributions and for the company match for the 35,587 employees as of Dec. 31, 2018.

One tech old-timer, in computer speak, is Microsoft Inc., Redmond, Wash., which isn't a member of the FAANGs.

It went public in 1986, six years after Apple's initial public offering, and it has been surging in recent years to the point where it has a higher market capitalization than Apple and the other FAANGs.

The Microsoft 401(k) plan has a self-directed brokerage account. Since Jan. 1, 2016, it froze the company stock fund in the 401(k) plan, preventing new contributions and transfers from coming into the stock fund. Participants with 401(k) money already in the stock fund can maintain this investment, which represented 7.6% of plan assets in 2017 and 7.8% in 2016, according to the latest Form 5500 filings.

Managed accounts are coming up short, some say