Asset owners are clamoring for private equity co-investments in hopes of seeing lower costs and increased control over their portfolios.

But industry experts say such transactions could lead to more portfolio risk without proper diversity or scale. And growing competition from other investors could further boost investment prices, which could cut returns.

Co-investments have been steadily gaining in popularity since the financial crisis, when general partners traded in club deals with competitors for co-investments with limited partners that preferred to invest alongside their general partners with no or lower fees rather than exposure to a single company in multiple private equity funds.

After several years of no co-investing, executives of the California Public Employees' Retirement System are making it part of its new private equity investment plan. Other investors, including Oregon Public Employees Retirement Fund and California State Teachers' Retirement System are expanding or relaunching co-investment activity to include more sophisticated transactions such as getting in on deals at the start of the acquisition process or identifying transactions in a target sector or strategy.

Co-investments are becoming a significant force in the industry, amounting to 25% of the private equity transactions in the U.S. in 2017, Cambridge Associates data show. Capital invested in co-investments doubled to $60 billion in 2018 from a year earlier.

And investors are well aware of the increased competition. The $223.8 billion West Sacramento-based CalSTRS expects to increase private equity co-investments as it implements its collaborative investment model. That model for alternative investments could include everything from direct investing and joint ventures to syndicates of institutional investors joining together on a direct investment.

"LPs are having the same idea at the same time," said Margot Wirth, CalSTRS' director of private equity, at the pension fund's Jan. 30 investment committee meeting.

Some 10% of CalSTRS' private equity commitments have been to co-investments, Ms. Wirth noted during a discussion of the new collaborative model. Over the past four years, CalSTRS has committed $1.1 billion to 22 private equity co-investment transactions. "In two to five years we would like to at least double it," she said.

CalSTRS' co-investment returns have been mixed, topping its private equity portfolio for all periods except the 10 years ended March 31, when co-investments earned a 6.6% internal rate of return vs. 8.1% for its fund investments.

"Staff believes that increasing the private equity's co-investing activities presents the greatest opportunity for improving performance" and reducing total fees and incentives paid to outside parties," a January report to the investment committee on the private equity collaborative model stated.

But CalSTRS is not interested in only the potential for higher returns. Plan officials think the experience gained could serve as a bridge to direct investing, including leading or co-leading deals in the future, the report noted.

"We do more co-investing and we'll do more of what we are already doing, but we are also doing more advanced co-investing," Ms. Wirth said.

The $354.7 billion Sacramento-based CalPERS also is looking at co-investments, restarting a program that has been dormant for the past few years. While CalPERS officials have been stingy with details regarding its new private equity model, CIO Yu Ben Meng in February highlighted its plan to expand its co-investment capabilities. 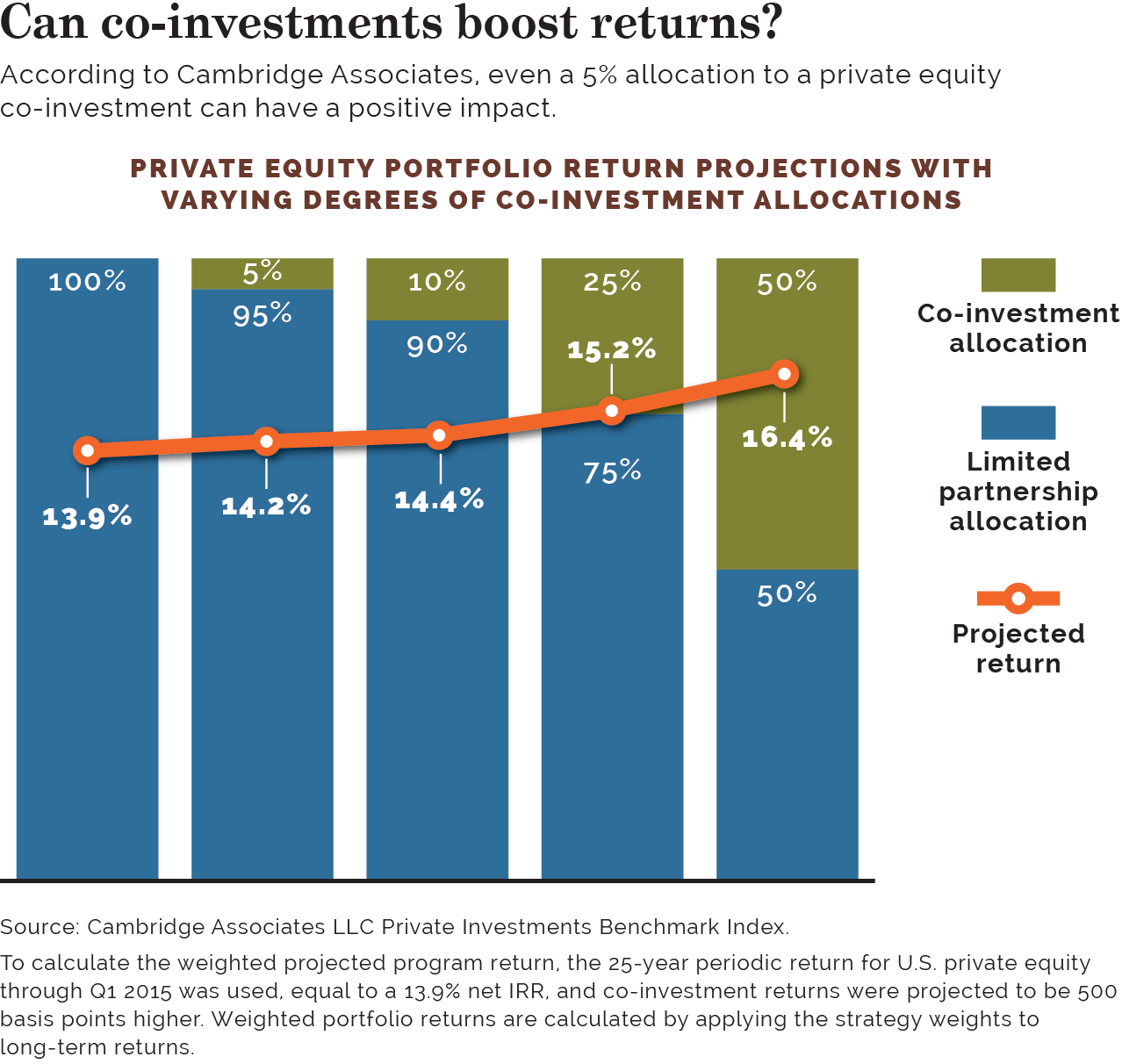 Like CalPERS, the Oregon Investment Council, which runs the Tigard-based $75 billion Oregon Public Employees Retirement Fund, is also rebooting its private equity co-investment program. Rather than make co-investments in-house, Oregon outsourced its program in 2018, committing $250 million to Pathway Capital Management LP for a customized co-investment fund to invest alongside the pension plan's private equity managers. The plan will use a systematic approach, assembling a global portfolio of co-investments in buyouts. Oregon's pension fund has a $16 billion private equity portfolio.

While investor have different reasons for making co-investments, increasing investment in the strategy, even allocating 5% of an investor's private equity portfolio, can have a positive impact on the asset owner's returns, Ms. Auerbach said, referring to Cambridge data.

Even so, investors need to enter a program with their eyes wide open, knowing their co-investments could suffer if the current economic upcycle ends, she said. "Everyone expects that we are in an extended boom cycle. What does that mean for co-investors? When you buy high, the odds are that you will have to sell low."

Over the past couple of years, private equity managers have been able to buy high and seller higher, she said.

The question Cambridge executives have been wrestling with whether the private equity industry has hit a new higher level of pricing. "Are we all just accepting things will cost more even though nothing has changed?" she asked. "What happens when the music stops?"

And investors are taking on deal-closing risk by co-investing in transactions earlier in the process, she added.

Co-investments used to come in one flavor, known as post-close syndicated co-investments, McKinsey's Mr. Klempner said, "a deal that gave investors a binary choice whether to allocate further to a deal that had already been structured."

Now, some investors are getting involved at the very beginning of the process, even helping to find companies they want to buy, Mr. Klempner said.

But while a large number of institutions want to co-invest, many do not have the staffing or ability to take on single-asset investment risk. And the competition for co-investments makes it harder for investors to put together a diversified portfolio. Investors with only one or two co-investments are taking on more risk than holding a greater number of co-investments, Mr. Klempner said.

"Your risk-adjusted returns in co-invest actually drop if you do too few deals," he said.

A portfolio of one or two companies is riskier because underperformance of one company has a bigger impact on the entire co-investment portfolio.