Commentary: Is 2019 the time for institutional investors to allocate to China A shares?

Pensions & Investments published a special report in January 2018 about the "big interest" in domestic Chinese equities, predicting that the handful of active A-share searches by U.S. defined benefit plans would soon turn into a wave as institutional investors proactively realigned portfolios to better reflect China's importance. Then, markets were hurt by trade tensions with Washington as well as concerns over Beijing's ongoing deleveraging efforts.

With an eye on the longer term, however, a growing number of institutions have been engaged in discussions about allocating to China A shares listed in Shenzhen and Shanghai, a market that has a low correlation with major global equity markets and has the potential to add meaningful portfolio diversification. U.S. institutional investors had $652 million allocated to China A-shares strategies, including inflows of $33.6 million in the 12 months up to the end of September, according to eVestment. The increasing interest in Chinese equities follows MSCI's inclusion in June of China A shares to its MSCI Emerging Markets index for the first time. Based on MSCI guidance, China A-shares weighting of less than 1% will rise to 2.8% in August and to 3.4% in May 2020.

Why should institutional investors get ahead of these shifts by boosting allocations to China generally, and to China A shares specifically? For starters, MSCI's weightings don't even come close to reflecting the importance of a domestic Chinese stock market that has a market cap comparable to Europe's and an economy that is forecast to be the world's largest by 2030. Allocating to China A shares is especially important because the companies these shares represent are more heavily exposed to China's ongoing shift from an export-driven economy into the so-called "new economy," with its higher-value-added sectors, such as hospitality, health-care equipment, industrial automation, new energy vehicles, biotech, software and smart manufacturing.

Notwithstanding recent market turbulence, we view this opportunity to be as momentous as investing in emerging markets was a quarter century ago. What makes China A shares so attractive is, we believe, the combination of potential diversification benefits and Beijing's historical record of delivering on its growth and development plans. Diversification stems from the low correlation between China A shares and major equity indexes, from U.S. to Japanese and European stocks (Exhibit 1). Those low correlations may persist for two reasons. First, the China A-share market is still in its infancy, dominated by retail investors. Second, these firms derive about 90% of revenues locally, making them more sensitive to Beijing's domestic monetary and fiscal policies than the policies of the U.S. and other Western authorities. 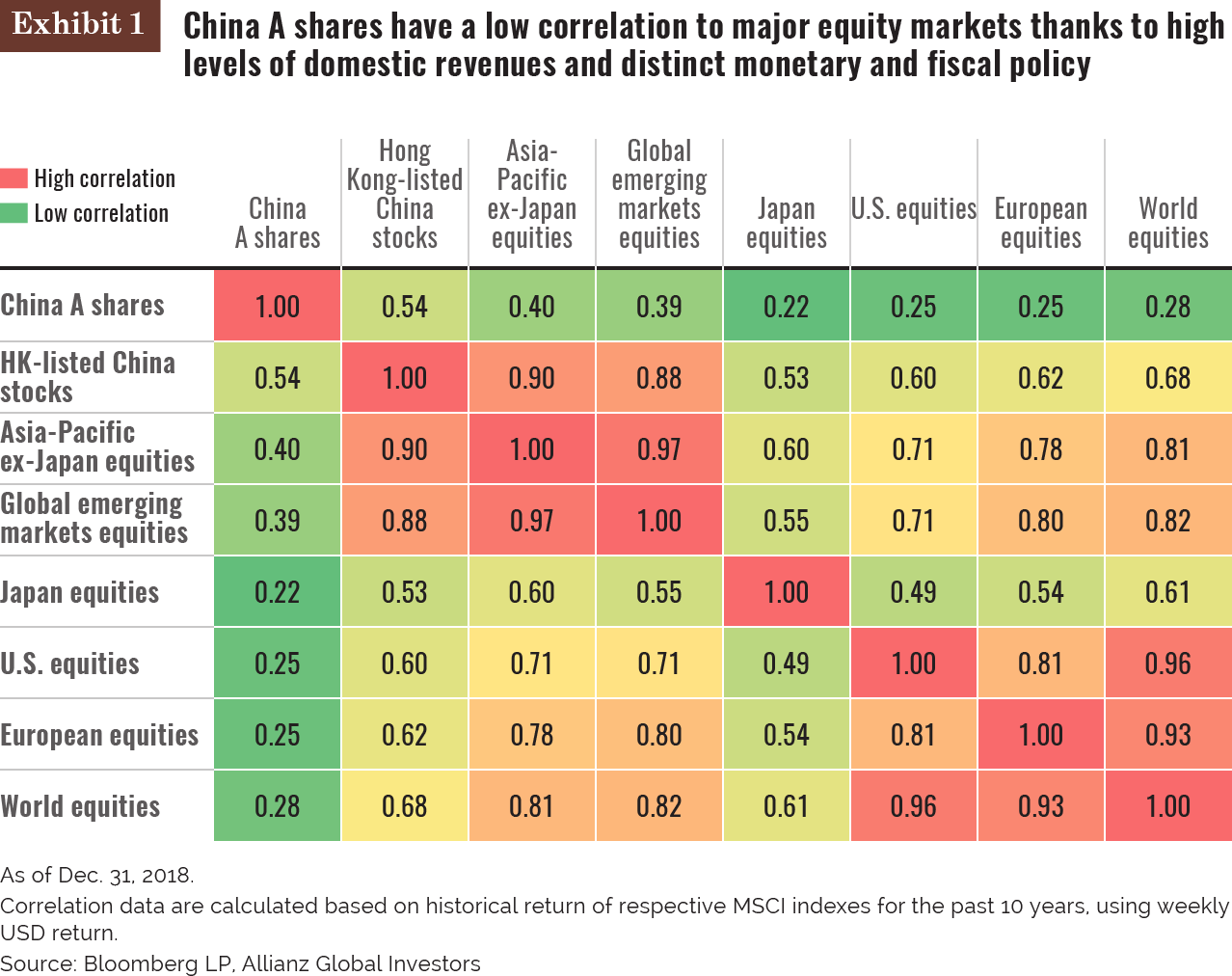 In addition, as noted earlier, China A shares offer exposure to significantly different sectors than are available in offshore China equities, such as H shares and American depository receipts, notably the faster-growing "new economy" sectors. Investors would find it impossible to gain the appropriate exposure to those sectors through traditional international equity and emerging market benchmarks (such as MSCI ACWI ex U.S. or MSCI EM) because those indexes have a significant mega- and large-cap bias. For example, more than half of the MSCI Emerging Markets index comprises just a dozen companies. And, as noted earlier, the MSCI Emerging Market index's China weighting will not be properly positioned to seize the opportunity for years.

That said, China A shares do carry their own set of particular risk factors. These include the current dominance of retail investors, who account for more than 80% of daily turnover and can have a short-term focus. Also, earnings surprises are frequent, perhaps because local Chinese equity analysts are less experienced than their developed market counterparts. All this contributes to higher volatility, a high dispersion of returns and greater sector rotation compared to developed market indexes. Stock-trading suspensions are also relatively common (albeit declining) and the regulatory environment is still somewhat unpredictable. Still, on balance, such risks are typical of many developing markets and tend to diminish as the influence of institutional investors increases, as is expected to happen. As active investors, we believe that stock selection and on-the-ground research experience can help mitigate these risks and also exploit these inefficiencies for investors. 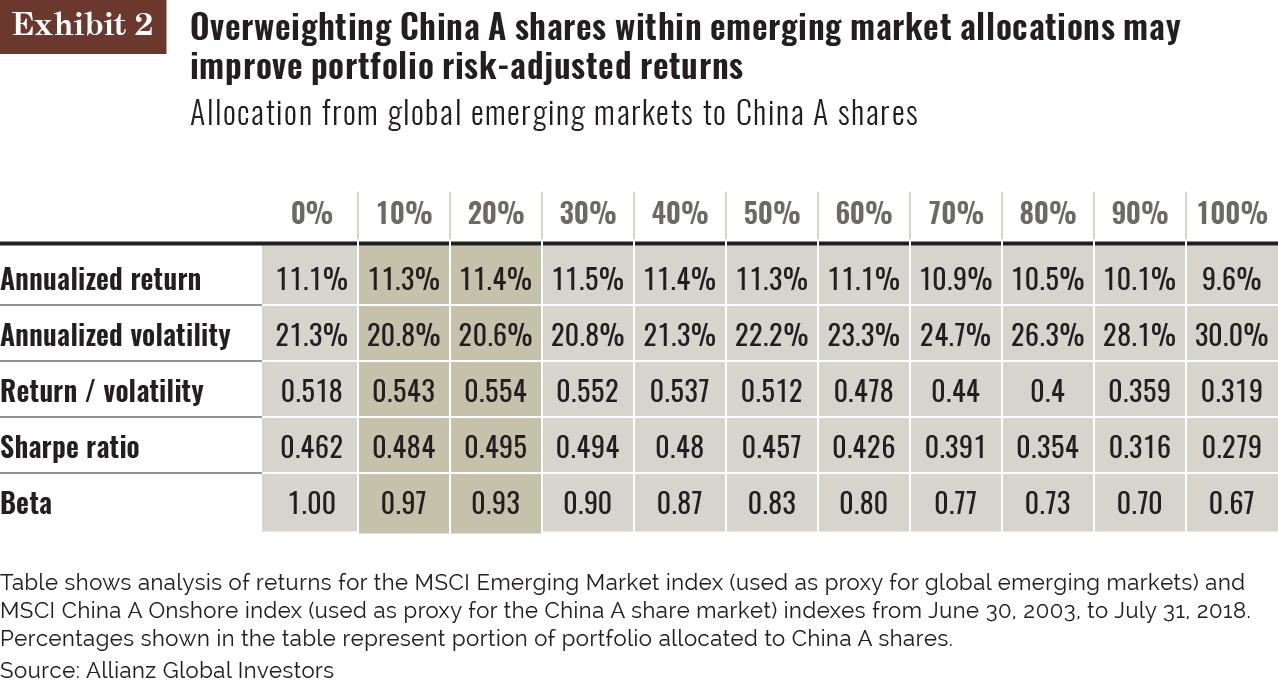 While A shares had a rough ride in 2018, sentiment is often significantly more volatile than economic reality. For example, the price-to-book ratio for MSCI China A shares in early January was 1.54x, approaching the historical bottom of 1.47x. This suggests that valuations could be near an inflection point. On the three occasions since 2005 when the price-to-book ratio breached 1.6x, the index rose in the following 12 months, averaging an annual total return of 55%.

In this light, we firmly believe that a direct allocation to China A shares with the intention of deliberately overweighting Chinese exposure against traditional emerging markets benchmarks is a viable option — arguably the only option — for institutions seeking to fully participate in the next stage of China's economic evolution, including the further development of its consumer sector.

Douglas Eu is U.S. chief executive officer of Allianz Global Investors, based in New York. This content represents the views of the author. It was submitted and edited under Pensions & Investments guidelines, but is not a product of P&I's editorial team.