Total assets of the 1,000 largest U.S. retirement plans continued to climb last year, reaching $11 trillion as of Sept. 30, representing a 6.4% increase from a year earlier, and a 31.8% increase from five years prior, Pensions & Investments' annual survey found.

The asset growth differences can be attributed to a number of factors, including DC plans "benefiting from market gains and new contributions," said Jay Love, an Atlanta-based partner and U.S. director of strategic research at investment consultant Mercer.

There was no change at the top as the three largest retirement plans by assets remained unchanged from last year.

The Federal Retirement Thrift Savings Plan, Washington, retained its No. 1 spot with $578.8 billion in assets as of Sept. 30, up 8.9% from last year. Sacramento-based California Public Employees' Retirement System again ranked second with $376.9 billion, increasing 11.9% over the year, followed by the California State Teachers' Retirement System, West Sacramento, up 6.5% to $230.2 billion.

For DC plans among the 200 largest, passive indexed equity assets increased by 14.5% in the 12 months ended Sept. 30, to $538.8 billion, while passive indexed bond assets remained unchanged over the year, at $50.2 billion.

DC plan clients in particular have recognized "that you don't want to be so dogmatic (when considering) active vs. passive" approaches in your portfolio, said Josh Cohen, Chicago-based head of institutional defined contribution at PGIM Inc. "We think there is a case for active and passive," depending on the asset class, Mr. Cohen said.

With this in mind, very few institutional investors — whether DB or DC, non-profit or insurers — are going into passive fixed income, he added. 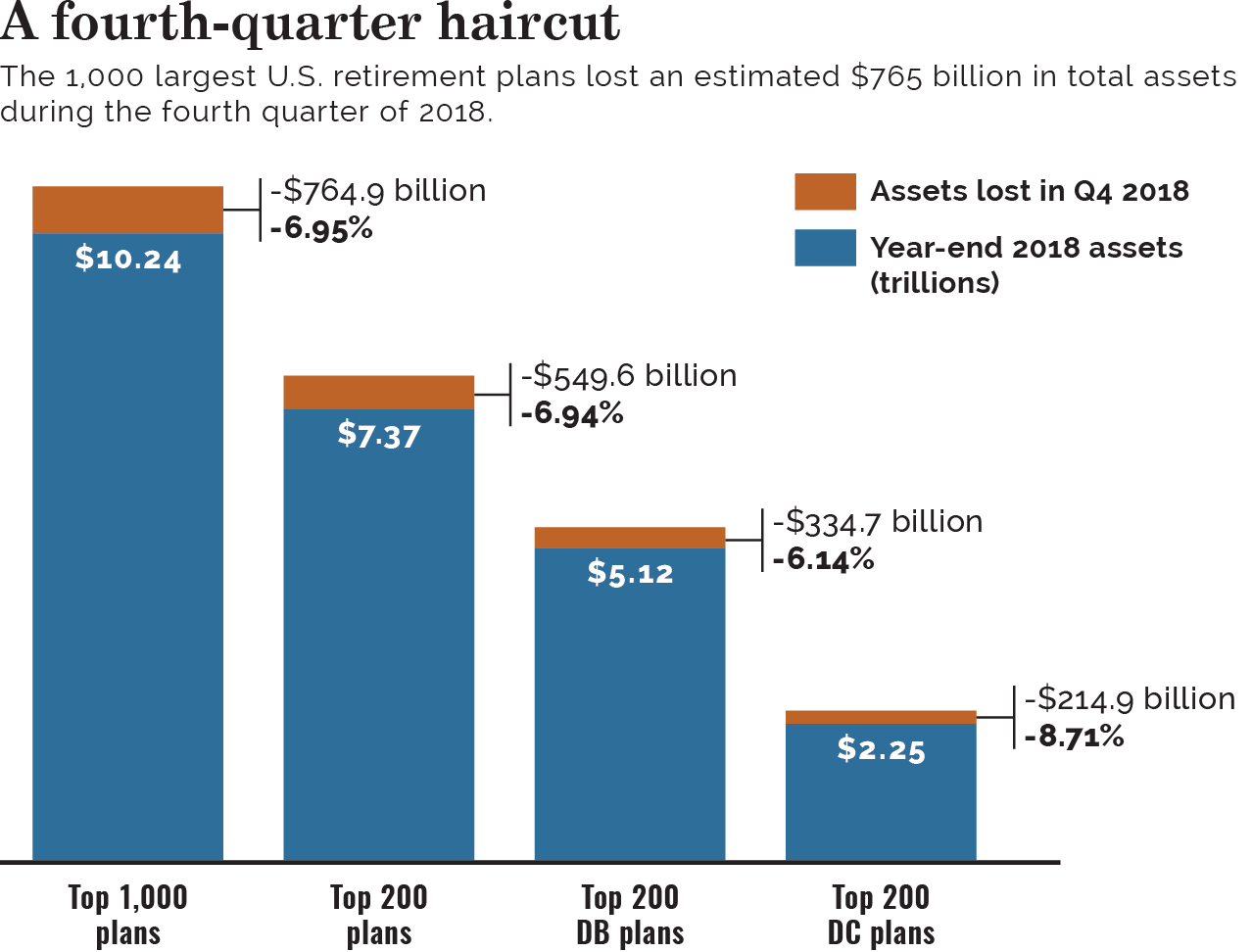 "A lot of it has to do with the portfolio construction of the benchmark in fixed income," Mr. Cohen explained. "And, historically, managers' ability through thoughtful security selection and asset allocation (has allowed them) to outperform the benchmark," he said of concerns about passive fixed-income investments.

Meanwhile, average allocations to global equity and domestic fixed income, respectively, increased to 9.3% and 43.5% of their total portfolio, up from 4.3% and 38.8%.

For public DB plans in particular, "many of them do have deficits, and they need exposure to higher-return asset (classes)," said Michael Moran, chief pension strategist at Goldman Sachs Asset Management, New York.

"That's a continuation of a trend we've seen in the past few years," he said about public DB plans increasing their allocations to alternatives.

Increased volatility in the fourth quarter, however, might prompt some pension plans to see a bigger role for hedge funds in their portfolio in 2019, said Sona Menon, Boston-based head of North American pensions and outsourced CIO at Cambridge Associates LLC.

"This gave an opportunity for hedge funds to have a little bit of a comeback … hedge funds showed that they can protect on the downside," Ms. Menon said.

"Over the last several years, (pension plans have) dialed down their allocation to hedge funds, and some have even eliminated them, but the volatility (last quarter) may help plan sponsors to think about whether there is an increased role for alternatives in their portfolio."

One of the toughest

P&I estimated that the 1,000 largest retirement plans lost $765 billion in total assets during the three-month period ended Dec. 31, a 7% decline from Sept. 30.

Defined benefit plans fared better than their defined contribution counterparts, insulated by relatively higher allocations to fixed income. Among the 200 largest sponsors, DC plans held about half of their total assets in global equities, the bulk of which was in U.S. equities.

Internally managed assets among the defined benefit plans in the top 200 increased over both the 12-month period ended Sept. 30 as well as over the five-year period.

Over the survey year, the top 200 plans' internally managed DB assets rose 7.5% to $1.3 trillion. The trend also has gained steam, as internally managed assets grew 31.2% from $987.7 billion over the five-year period ended Sept. 30.

The move toward internal management shows that external active managers increasingly are having to demonstrate the value for the fees they charge clients, said Julian Lyne, the New York-based chief commercial officer for Newton Investment Management, a boutique asset manager that is a part of BNY Mellon Investment Management.

"In certain asset classes, plans that have good resourcing can do (internal management) more effectively. In my experience, the allocation to external managers tends to be some of the more non-vanilla products and capabilities. I think it's about value for money, and in some areas, taking assets in-house is the right move," Mr. Lyne said.

The 10 largest retirement plans remained the same this year, with three plans changing positions. Assets in AT&T Inc.'s DB and DC retirement plans increased 9.3% over the year to $124.1 billion in total assets, putting the corporate plan in the No. 8 spot, up from No. 10 last year.

AT&T's retirement assets were boosted by its June acquisition or Time Warner Inc., which was estimated to have $7.2 billion across its defined benefit and defined contribution plans as of Sept. 30, 2017, and ranked No. 284 last year, according to P&I data.

Separately, this year, P&I included for the first time in its survey a question for DB plans asking if their fund incorporated environmental, social and governance factors into their portfolio management process.

The number of funds in the top 200 that responded "no" to the ESG question was 46, while 18 funds said they were using ESG factors, the survey revealed. Not all plan sponsors responded to the question.

Also, among defined benefit plans in the top 200, assets in factor-based equity increased 86.4% to $38.4 billion from $20.6 billion the previous year, led by CalPERS increasing its exposure by 52% to $19 billion.

Charles McGrath contributed to this article.

Older companies, not upstarts, will take lead on innovative changes

For largest U.S. fund, the sky's the limit

Older companies, not upstarts, will take lead on innovative changes

For largest U.S. fund, the sky's the limit