Americas Split From Rest of World on Future of Investment Management: Fidelity Survey

The future of investment management looks different depending on where you are.

Fidelity Institutional Asset Management's 11th global institutional investor survey put into stark relief how differently investors in the Americas, Asia and Europe think about important topics such as the role of technology in asset management and asset allocation.

“I was struck by the differences we saw in responses from the Americas relative to what we saw from the rest of the world,” said Jeffrey S. Mitchell, chief investment officer at Fidelity Institutional Asset Management.

“Institutional portfolios continue to evolve,” he said, adding that “institutions expect technology to be a primary driver of those changes. In addition, several asset allocation trends are worth noting, including a greater focus on private investments” and the fact that in most areas except the Americas, increasing adoption of socially responsible investing was the predominant expectation.

The survey polled chief executive officers, chief investment officers, treasurers and other investment executives at 905 institutions in 25 countries representing more than $29 trillion in investable assets. In the survey, the Americas included the U.S., Canada, Mexico and Brazil, with the largest portion in the U.S. Japan was broken out from the Asia category and the U.K. was broken out from Europe.

Institutional investors across all regions were aligned on one point: The expectation that by 2025, artificial intelligence will assist in creating optimal asset allocation models. To a lesser extent, they thought AI would be used to monitor and evaluate portfolio performance and risk.

However, few firms in the Americas appear to be thinking proactively about their own potential implementations, with only 29% of them testing or exploring the capabilities of AI within their own decision-making process. In contrast, 88% of respondents in the rest of the world said they were testing or exploring uses of AI.

When it came to whether technology will allow institutional investors to make asset allocation decisions without human contact with an asset manager (including investment teams, sales and marketing), responses were split as well. Only 22% of respondents in the Americas viewed this prospect as likely, compared with much higher proportions elsewhere (See Exhibit 1).

“This strong difference points to the Americas as a more relationship-driven culture of investing, where human contact is expected to remain a big part of the equation,” Mitchell said.

The Fidelity survey also asked about blockchain, another technological development that has been discussed increasingly in context of investment management. Once again, respondents outside the Americas said definitively ― with no less than a 92% “likely” response ― that by 2025, blockchain would fundamentally change the industry, while in the Americas, that rate was barely over half. On the flip side, 30% in the Americas said they thought the prospect of such change was “unlikely” while only a negligible percentage (0% or 1%) in the other four regions shared that opinion.

Mitchell said this discrepancy could be due in part to how technologies such as mobile payments have advanced more quickly in other parts of the world than in North America, where intermediaries such as credit and debit card processing still dominate. “Clearly, most of the world outside of the Americas is expecting technology to reduce the role of financial intermediaries involved in transactions,” he said. “Blockchain and similar technologies may still be in their early stages, but their potential to transform the investment industry is compelling.”

“Depending on the geography, people tend to take different views on how asset classes are evolving,” Mitchell said. This was evident in the response to the likelihood of a new asset class such as cryptocurrency emerging as a result of advancing technology. Again, respondents outside the Americas overwhelmingly said this was likely, with Japan voicing the largest proportion of agreement. However, just 39% of respondents in the Americas said this was likely to happen within seven years, with 37% explicitly deeming it unlikely (See Exhibit 2).

The more conservative response from the Americas may be due to slightly different institutional cultures between the regions, Mitchell suggested. “I think in the Americas, we always think about potential future states not only through an investor lens, but through a regulatory lens,” he said. Concerns such as how and whether any new asset class could be monitored over time, and whether there would be sufficient liquidity to allow for efficient marking-to-market, for example, can influence responses. “High volatility in some of the cryptocurrencies over the past year may have amplified apprehension for some and eagerness to see the asset class evolve for others.”

In addition, investors in different parts of the world may simply have different goals, which drive their expectations of the future. “There are very different levels of optimism and skepticism on the viability of new asset classes such as cryptocurrencies,” Mitchell said. “I do think that institutional investors are generally always looking for different asset classes to complement their existing suite, but so much depends on how a technology develops to help protect investors in new asset classes.”

In terms of institutional investors' plans for asset allocation, Mitchell said one number that jumped out at him was the 45% of respondents from the Americas who plan to decrease their allocations to domestic equity over the next seven years (See Exhibit 3). That compared to just 6% who said they plan to increase these investments. In the rest of the world, responses around domestic equity were more evenly split, with 18% saying they planned to reduce exposure and 16% anticipating an increase.

Despite recent sell-offs in emerging market equities, the survey showed investors in the Americas keen on the asset class over the longer term, with 32% planning to increase allocations by 2025 ― the highest such figure among investors in the Western Hemisphere. EM equity did well in the rest of the world too, with 21% of respondents planning to increase allocations. 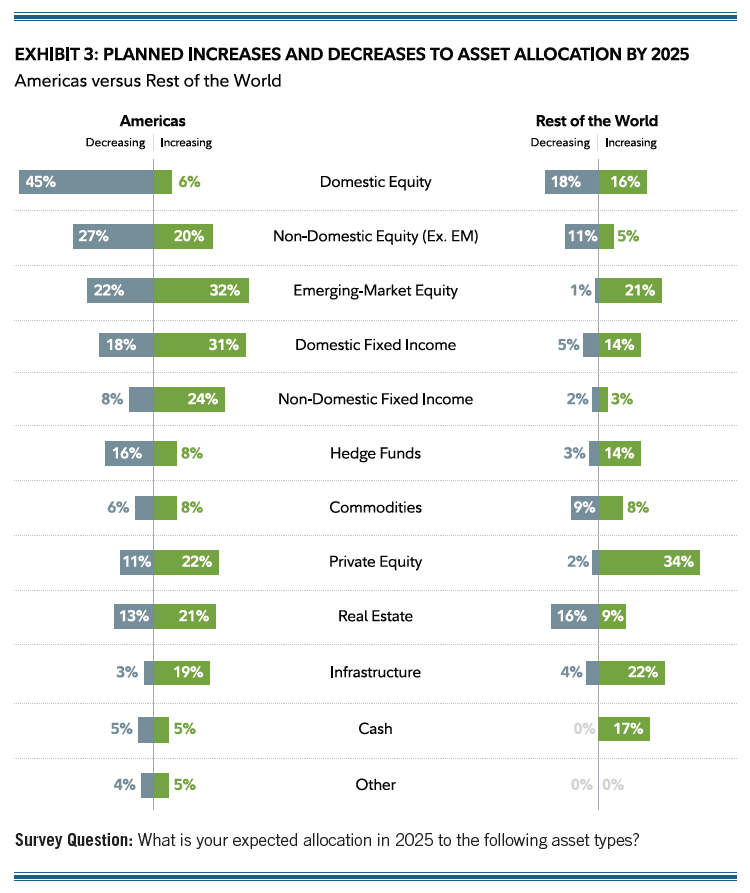 Regional differences were highly pronounced on the issue of socially responsible investing. Most dramatically, 79% of respondents in the Americas said social responsibility had little to no influence on their investing process.

“That compares to almost the exact opposite when you look at Europe, the U.K., Asia and Japan,” Mitchell said.

“What was even more striking was when asked about the direction of change expected by 2025, the numbers again are really low in the Americas,” he said.

Specifically, only 38% of respondents in the Americas said they expect to increase their allocation to SRI by 2025, compared with 63% globally. “So not only is SRI less important in the Americas, it is less likely to be evolving at the same rate as it is outside of the Americas,” Mitchell said. “I wonder whether that difference is because of demands from their constituents, or whether it is related to perceptions around the potential for SRI mandates to satisfy return-focused investors.”

LOOKING TO THE FUTURE

This year's edition of the survey, titled “The Future of Investment Management,” was the first to target respondents' views of the future; previous surveys covered such topics as the art and science of investment decision making, asset allocation versus investment committee education and the shortening of the investment time horizon.

“What is unique about this particular survey is that we have more than 900 professional investors expressing their views about what the future is going to look like and how that is different from today, and certainly what role technology will play in that evolution,” Mitchell said.

“What comes through loud and clear from the survey is that investment managers should be prepared to move and grow with their clients,” he added. “As we think about the real needs defined by the institutional investors surveyed here, it's clear that in a rapidly changing world, asset managers can play a key role in helping institutional investors prepare themselves for future transformations. The overall relationship between the two will remain important, even as technology augments more and more of their traditional interactions.” ■

Views expressed are as of Nov. 5, 2018, and may change based on market and other conditions. Information presented herein is not a recommendation or an offer or solicitation to buy or sell any securities. Fidelity Investments Institutional Services Company, Inc. 868350.1.0