A lot of ink has been spilled about the development of China as a global economic power, but for institutional investors, it has remained an emerging market. Not for long, though. Institutions are rethinking their approach to China, and they are considering a dedicated allocation.

Not only are Chinese stocks and bonds being included in major benchmarks for the first time, the investment infrastructure and opportunity set — in both stocks and bonds — have evolved to the point where investors who are ignoring or avoiding China risk leaving significant return potential and diversification benefits on the table.

“These developments, taken together, should be exciting news for institutional investors,” Robert Horrocks, chief investment officer of Matthews Asia, said during a recent Pensions & Investments event, Investing in China's Future Breakfast Briefing. “The challenge is that indices do not reflect the opportunity set.”

Institutional portfolios commonly get exposure to China through a broad emerging market mandate. Unfortunately, such exposure is typically weighted to large-cap companies and stagnant 'old economy' sectors such as industrials, materials and financials. However, institutional investors are reconsidering their approach to investing in China in order to access the drivers of growth and market expansion.

Horrocks said a dedicated allocation to China should provide greater exposure to domestic consumption and 'new economy' companies with strong fundamentals in the IT, health care and consumer sectors.

Earlier this year, index provider MSCI added the first tranche of China A-shares to its benchmark emerging markets index, at a 5% weight. In late September, MSCI launched a consultation on an additional weight increase of China A-shares that could include a rise to 20% in two steps, in May and August 2019.

“The benchmark is telling you they think this might be important 10 years down the road, but they're not telling you anything about how to select the right companies in the right sectors with the right management today,” Horrocks said.

“Yes, you can say, 'We can ignore the A-share market because it's only 0.8% of the benchmark,'” Horrocks said. “But that's a small portion of nearly 1,000 companies in the most exciting sectors in the world.”

To put money to work in China, investors need two things: Deep due diligence and a long-term view. Due diligence, Horrocks said, requires visiting companies and management; having a long-term view means not being caught up in short-term headlines and volatility. 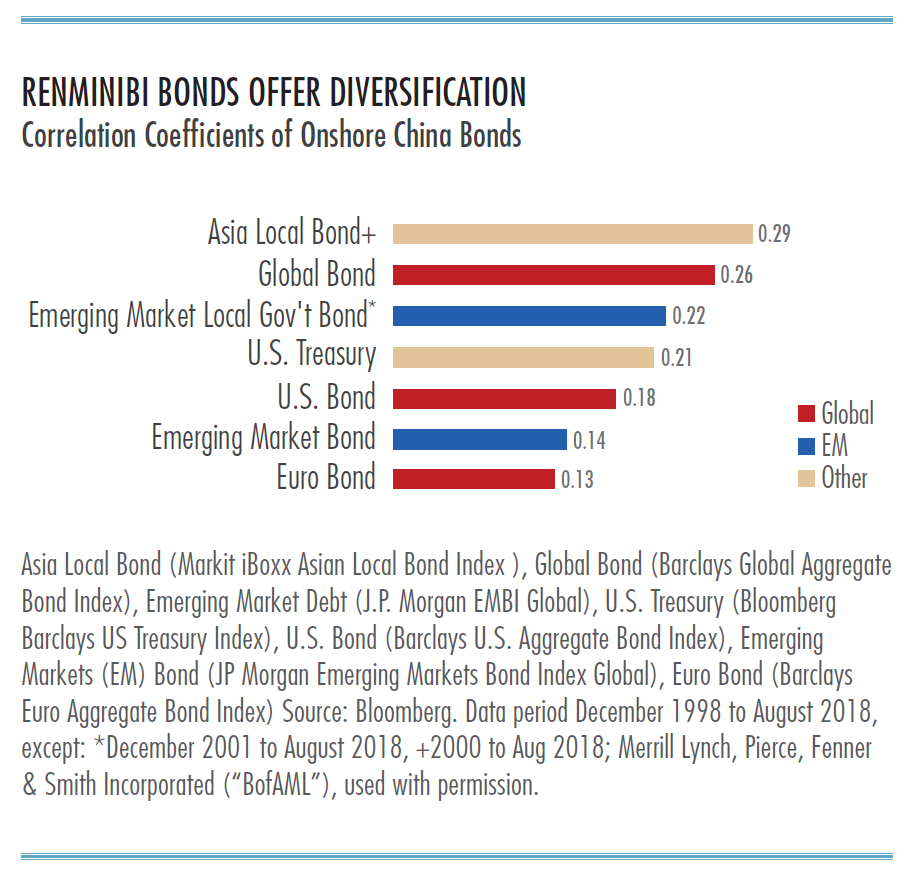 The opportunities are not limited to equities. China's fixed-income market is burgeoning as well.

One of the first signs was in 2016, when the International Monetary Fund included China's currency, the renminbi, in its Special Drawing Rights basket. One of the results of that move, according to Matthews Asia portfolio manager Teresa Kong, was that sovereign wealth funds began to invest, on a strategic basis, in China's bond market.

Then Bloomberg said last year that it would include China in its Bloomberg Barclays Global Aggregate Bond index in 2019.

“That's significant because this is the developed market bond index,” Kong said. “We're not talking about an emerging markets index. China is now being included in the most widely used institutional global bond index.

“That also means that no longer can you afford to sit on the sidelines,” she said. “Once it becomes part of the Global Agg, you need to have a view because a neutral weight means a 5.5% weight to this index, and if you're looking to fulfill your fiduciary duty, you need to get much deeper and really understand what the key drivers are.”

The Chinese bond market is comprised of central government bonds, quasi-sovereign bonds, local government bonds and corporate bonds, Kong said. In addition, there is a developing market for asset-backed securities.

At this point, foreign investors own just about 2% of the Chinese bond market, and most of that is from sovereign wealth funds making strategic allocations.

One way institutional investors could gain exposure to Chinese bonds would be through the Bloomberg Barclays Global Agg, but Kong said that would only provide exposure to rates and currency.

Returns on Chinese bonds are based on the country's monetary policy, economic growth and currency, and as such, are less synchronized than the rest of the world. That has led to a historical correlation with other fixed-income classes of roughly zero to 0.3, according to Kong. While correlations are likely to increase as more foreign investors come into the market, Chinese bonds are likely to continue to offer solid diversification.

From a return perspective, credit, currency and rates are key.

“If you compare China to its developed peers in the Global Agg, China offers the highest yield of any developed market,” Kong said. “So it offers yield pickup even in risk-free government bonds.”

As far as the currency goes, she pointed out that the renminbi has not been as volatile as headlines might suggest, with volatility running at about half that of countries such as Japan and South Korea.

And with credit spreads elevated, “by investing in a triple-A-rated corporate entity, you're picking up between 100 and 150 basis points above government bonds,” she said.

The risks in the Chinese bond market are not that different from risks in other markets, chiefly defaults, but Kong also said the regulatory, legal and accounting environments are different and require another level of scrutiny by investors. That's where Matthews Asia's team of Chinese analysts plays a big role.

CHINA AS A DEDICATED ASSET CLASS

“You have not seen a transformation of life and experience on the scale we've seen in China,” Horrocks said, adding that the transformation has been driven by savings, investment, market pricing and improved governance.

The size, growth and increasing complexity of a market determine whether it merits a separate allocation in investor portfolios. Based on these indicators, Matthews Asia suggests that China not only be part of a diversified portfolio, but also deserves separate and distinct treatment. ■