International Growth: Given US valuations, an active approach to international equities offers better opportunities for growth

Having an international allocation has always been important to institutional investors, but today is a particularly good time to look beyond the U.S. to find growth.

“With international exposure, you are tapping into the intellect, the capabilities, the multiples, interest rates and growth trajectories of other markets, which often are very different, and in many cases better, outside the U.S,” said Elisa Mazen, head of global growth and portfolio manager at ClearBridge Investments.

In other words, the U.S., despite its current economic boom — and perhaps because of it too — is not the only game in the world when it comes to offering companies with the potential for rapid growth. (See Europe vs. U.S. chart on the next page.) Europe and Japan are finally recovering from years of economic stagnation. Markets have already baked in potentially destabilizing political news from eurozone countries like Italy and Greece. And many industries, ranging from robotics to green technology, are more advanced in countries outside the U.S.

“The No. 1 reason an international play is so timely right now is that international markets have underperformed the U.S. market,” said Mazen. She argued that this relative underperformance derives from currencies rather than economic factors. “Their very good economic performance has been masked by currency performance, which will mean revert,” she said. Going forward, Mazen explained, she anticipates these currencies will return to their normal trading ranges, driven by a reduction in the difference in interest rates between the U.S. and other countries. The outcome could be a liftoff of these offshore currencies and foreign market performance in general.

Ownership of U.S.-based multinationals does offer global exposure, but without the cyclical and correlation benefits of direct non-U.S. investments. The U.S. is further along in its economic and equity market expansion, and as Mazen pointed out, prices reflect that, “When you are buying U.S. companies, you are also buying U.S. multiples.”

In other words, U.S. equities are richly valued, and buying international equities may be a cheaper way to get international exposure. Additionally, the U.S. market is very well understood, maybe overly so in terms of investing: There are very few mispricings, and the market is comparatively efficient. By comparison, foreign markets offer greater possibilities to find undervalued stocks. “You're paying very high multiples when you buy U.S. companies and you're not paying that in many other countries,” Mazen said.

These macro trends provide a favorable backdrop for international investing, but it is only a backdrop. In terms of identifying specific opportunities, it's necessary to drill down to the company level. ClearBridge is a bottom-up stock picker. “We buy individual stocks, specific stories,” Mazen said. “We're looking for growth companies that have uncorrelated growth drivers around the world.”

Mazen argued that merely looking at macroeconomics and currency, or headlines such as the trade war with China, can lead investors to ignore more interesting and long-term growth opportunities. “Once you start scratching below the surface, you find a lot of really dynamic and interesting trends and companies,” she said. It is here, among these overlooked yet promising growth stories, that ClearBridge finds buying opportunities.

For instance, technology has disrupted multiple industries, ranging from media to health care to the consumer experience. What is of greater interest to ClearBridge are the beneficiaries of the disruption, particularly the lesser-known ones.

Electric cars are a good example. (See Global EV Sales chart below) “We've been interested in electric vehicles for some time,” Mazen said. ClearBridge's team undertook analysis of this market starting in 2015. Current growth now exceeds even the best-case scenario. An assessment of the potential for electric cars led ClearBridge to look closely at companies on the materials side. The ultimate outcome of this analysis, which evaluated sector-based trends and earnings growth, was to identify investment opportunities in lithium batteries. 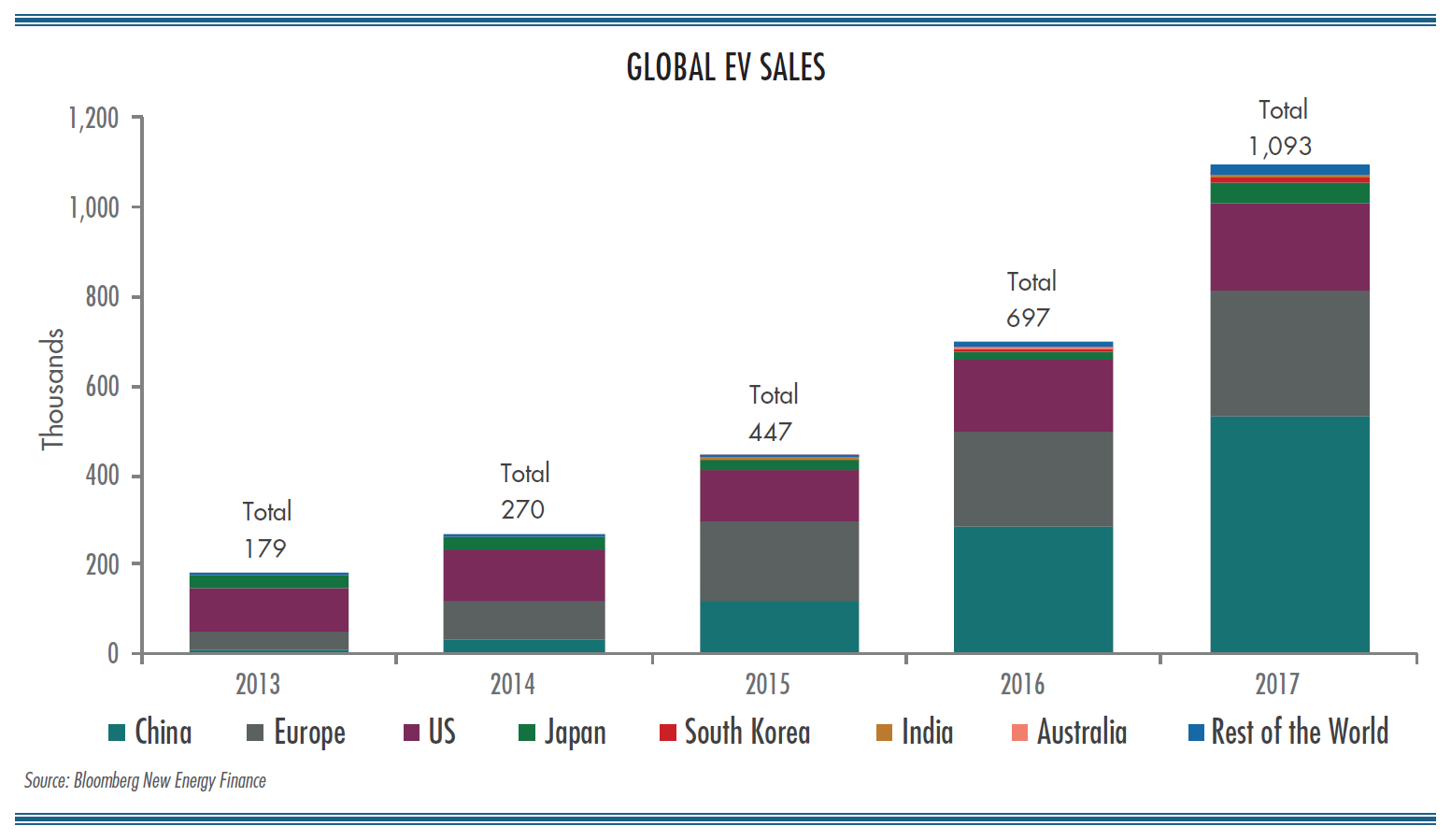 The structural growth stocks ClearBridge targets are the ones the market has yet to recognize for their growth potential; they may also be trading at a discount. The secular growth companies are stable, established ones with superior business models. And the emerging growth stocks are international franchises in the process of breaking out to widespread expansion. This bucketed approach to growth offers diversification and aids in identifying interesting growth stories missing from a more conventional framework. ClearBridge targets and invests in all three types.

Having a good growth story is important. But the other relevant question is, at what price? “We're looking for where growth is inexpensive,” Mazen said. “We have a valuation approach to growth. We like to find relatively inexpensive companies with rising earnings. We can get additional alpha coming from that lower valuation.”

As a result of this process, Mazen said ClearBridge believes it can identify companies positioned for consistent growth over the long term that are trading at attractive multiples today. Mazen said, “If we get it right, we're going to be compounding above the market for a long period of time, and that's how we should win.”

A recent successful investment in a British pest-control company serves as a useful case study to illustrate ClearBridge's approach to international growth investing.

Mazen and her team had known of the company for a long time. Additionally, they knew the CEO and his work at a previous firm. They invited him to their office for a meeting that allowed Mazen and her team to more deeply understand the strategy, what the company was striving for and how it intended to grow its pest-control business. The premise was interesting.

“We do a lot of meetings on premise, but we also have our factor model,” she said. The proprietary model systematically looks at 6,000 names around the world, made up of different market caps and geographies, both emerging and developed. It allows ClearBridge to understand which companies are expensive or inexpensive in terms of valuation, and which ones are experiencing rapid earnings growth.

“The pest-control company was actually showing up quite well in the model as well, giving us more signals that it was an interesting company,” Mazen said. The model indicated that the stock was inexpensive and earnings were growing. Though the model is not a formal 'buy' model, it provides a signal to more closely evaluate a company. Mazen and her team did and liked what they saw.

Though the pest-control company was hardly in a glamorous business — the company kills bugs and rats — it was quickly growing in international markets such as India, in both the business and residential sectors. It was also benefiting from a secular shift in these countries to focus more closely on health issues. Mazen predicted that as these emerging economies further develop, and as restaurants, hospitals and schools in these countries become more conscious of hygiene, the pest-control company should be “a very, very good long-term growth business.”

“That's how we think about growth and about our companies,” Mazen said. “The goal is not to chase macro trends. Instead, it is to find and hold growing companies for a long period of time.”

Not every strategy works in every market condition. International growth tends to underperform during certain periods.

“When there's a very narrow, momentum-driven market that has no underpinning in valuation, it can be problematic, because we do consider valuation,” Mazen said. For example, the post-Trump election spike lifted many small caps and other U.S. stocks, leading to comparative underperformance for international growth strategies.

In turn, however, ClearBridge can offer its own risk management, driven by its valuation approach to growth. ClearBridge constantly monitors valuations, letting winners “run” if they stay in their valuation ranges. Active management presents many chances to make needed changes. ClearBridge also focuses on mitigating factor risks.

“We want good stock picking to drive every sector that we're invested in,” Mazen said, “and we want to try to minimize factor exposure.” These factor risks could include currency rates relative to a benchmark, being sector overweight or underweight relative to a benchmark, or individual position sizes. The goal is to minimize these risks and exposure to the market in general so that stock picking is the primary driver of portfolio performance.

Investors may still be skeptical that the world outside of the U.S. is the best place to find growth stocks. The comparative strength of the dollar may have added to this conviction. But looking beyond the immediate business cycle, other countries' currencies may recover, and so will the strength of their economies as measured in dollars. In fact, some estimates predict China and India will be Nos. 1 and 2 in world economies, topping the U.S., by 2050. 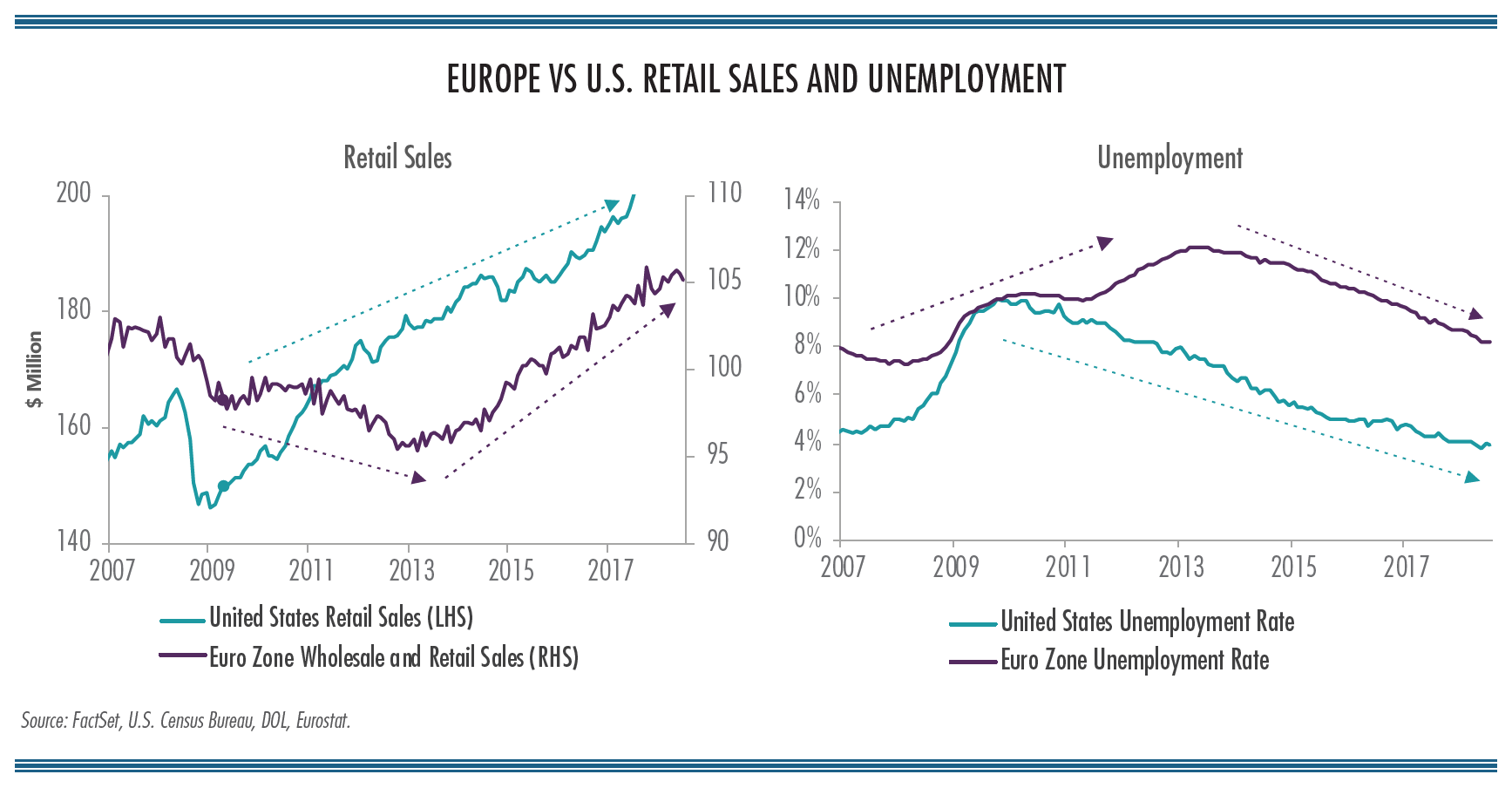 INVESTING ACROSS MARKET CAPS AND COUNTRIES

“What we're looking for is interesting growth ideas with good fundamental drivers that cannot be knocked out by the U.S. rolling over,” Mazen said. However, rather than just seeking out companies that are uncorrelated to U.S. markets, her analysis includes not only valuations but cash flows.

As an active manager, ClearBridge has the ability to find growth opportunities in areas that may not be well represented in standard benchmarks. (For instance tech is under-exposed in the commonly used MSCI All Country World ex-U.S. index). In contrast to the benchmark, ClearBridge can invest across market caps as well as in developed and emerging markets, including China. It has large allocations to tech, unlike the benchmark. The resulting portfolio, therefore, should not just hug the benchmark and is distinct from passive approaches.

“We see these trends and we ask, Are they durable?, Are they sustainable?” Mazen said. Another critical question Mazen asks herself is if ClearBridge's viewpoint is different from the market's. If it is the same, then by definition, ClearBridge can only deliver the market return. But if it is distinct — and correct — the strategy is positioned to outperform.

“When we think we have a different point of view,” Mazen said, “that's what really gets us excited.” ■