HIGH CONVICTION: THE LATEST IN GLOBAL ACTIVE EQUITY WITH OLIVIA ENGEL Looking beyond the impact of oil on energy stocks

The importance of valuation and sentiment, and the EM-DM dichotomy

Given the apparently close relationship between oil prices and energy-stock prices, investors can be forgiven for thinking that oil is the only factor that matters when they are considering an allocation to the sector. But they would be wrong.

Engel said an analysis of the price of oil compared with excess returns on energy stocks over the last 20-odd years shows that the relationship between the two has become closer over time.

An analysis of risk, using the beta measure for sensitivity, confirms that as oil prices gained explanatory power with respect to energy-stock prices, stock prices in the energy sector also became more sensitive to oil-price volatility — particularly in emerging markets, Engel said. Beta values in emerging markets over the past seven years have stood at 0.61, compared with only 0.54 in developed markets.

When a significant proportion of a sector's movement in stocks can be explained by an outside factor, further work is necessary to find the stocks that are worth owning.

“The oil price drives the sector overall. But within the sector, it's still necessary to look at the fundamentals: cash-flow generation, strength of the balance sheet, valuation, how much capital expenditure or research and development they are undertaking,” Engel said. “That helps distinguish between stocks in the sector. That's where we believe we can add value.”

Within the energy sector, which is broad, exploration companies, not surprisingly, have the highest sensitivity to the oil price (around 75%), while the refiners tend to have lower exposure (around 25%). Engel said her team prefers the integrated energy companies and refiners. Integrated companies explore, produce, refine and distribute oil and gas.

In the energy sector, the dichotomy between emerging and developed markets is evident in two main themes: valuation and sentiment. In emerging markets, valuations are attractive, but sentiment is weak. In developed markets, the story is the opposite: Valuations are not as attractive, but the sentiment is solid. An important job is to balance those two factors and determine the best way to meet investor goals. 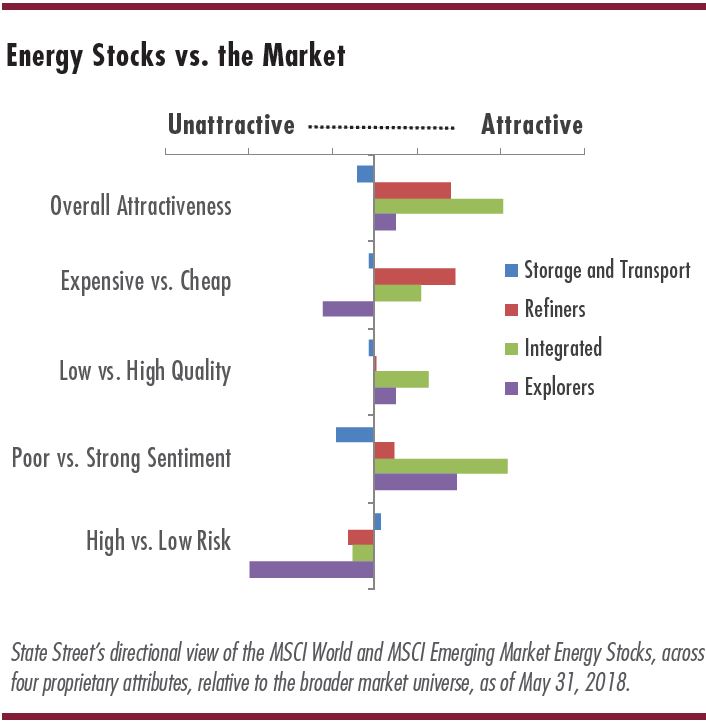 “We have to weigh them up against each other because it's a tradeoff,” she said. “Because the developed markets aren't looking as cheap, their attractiveness is not as strong. The fundamentals are quality and valuation metrics, while sentiment is something that can turn very quickly.”

The key is to keep a close eye on investor sentiment toward the sector and stocks while also avoiding reacting to daily swings as investors let their emotions get the better of themselves.

Energy stocks in emerging markets have been attractive for some time, even as sentiment trailed off, because valuations remained low. In developed markets, while sentiment was strong, valuations were high.

Engel added that the energy sector tends to be one of the more volatile parts of the broader market, particularly in developed markets. That can be critically important for institutional investors, particularly defined benefit plan sponsors.

“In the defined benefit space, where plan sponsors have equities in their portfolios for the growth characteristics, the volatility of equities can be challenging at times,” she said. “If the risk allocation in the equity portion, specifically in the developed markets, is highly driven by a bet on the energy sector, that may not be the volatility profile all asset owners want from their equity exposure.”

And that may be OK because, contrary to what conventional wisdom would suggest (higher-risk, higher-return potential), higher-volatility stocks don't provide the best returns over the long term.

“It's a contrary empirical outcome driven by behavioral finance traits,” Engel said. “We call it the lottery effect, whereby investors think there's a small chance to make a really large gain, so they'll overpay for companies like that. High-volatility companies meet that profile. So don't think that just because you're buying a high-beta or high-volatility stock, you're going to get the returns that the risk is suggesting.”

In the energy sector then, the low-, or lower-, volatility companies are the ones with strong cash flows and more consistent earnings that are less sensitive to changes in the price of oil. Often these are companies that can pass through to consumers oil-price changes.

“Those are absolutely a better play over the long term,” Engel said, “being mindful of valuation because the high-quality end can sometimes get a bit expensive.” ■